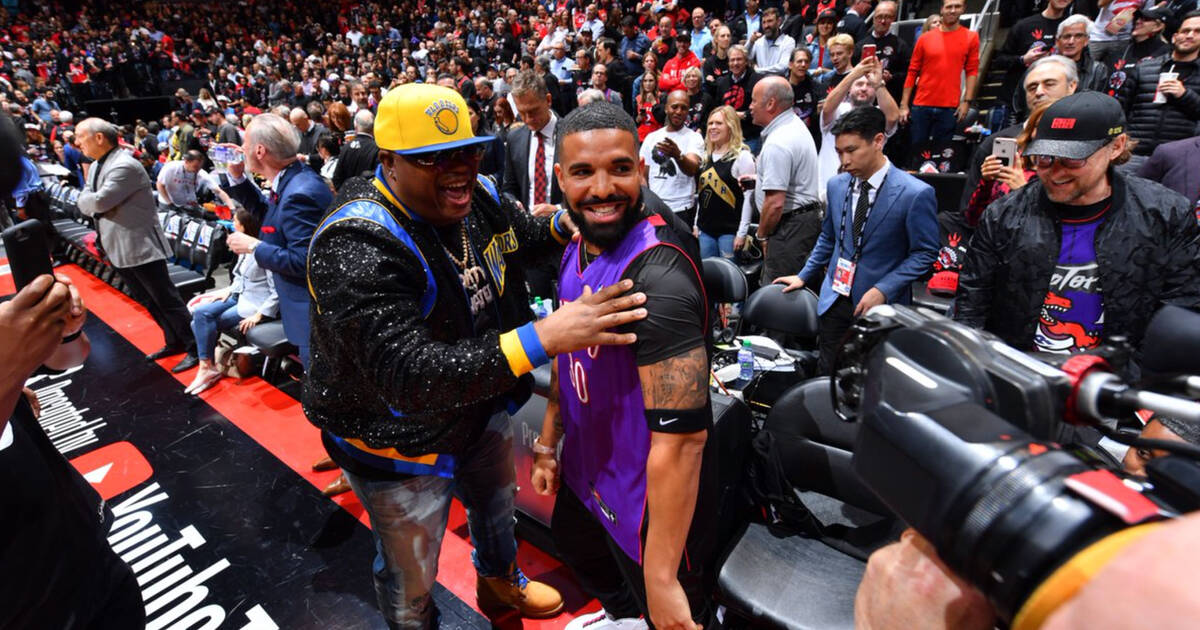 After Drake treated Toronto Raptors coach Nick Nurse to a shoulder rub in Game 4 of the Eastern Conference Finals, he got a warning.

NBA commissioner Adam Silver told Drake that he crossed the line – from passionate to inappropriate.

"When you're in the middle of coaching a game and you're completely focused, you obviously don't want somebody who's not on your team touching you," he said in a news conference before Game 1 of the NBA Finals.

On Thursday night, Drake was expected to be on his best behaviour. So, he changed his approach.

He wore a vintage, signed Dell Curry Raptors jersey, Golden State Warrier Steph Curry’s father. Steph’s dad played for the Raptors for three seasons from 1999 to 2002. When Steph was young, he sometimes came to practices to shoot with the Raptors.

You just know Drake is going to act like he won the game for the Raptors until game 2 🤣🤣🤣 pic.twitter.com/yvL8O8BEHt

Drake also wore an armband over his #30 and #35 tattoos for the Warriors’ Steph Curry and Kevin Durant. Before he was the Raptors’ global ambassador, Drake was a huge Warriors fan.

Drake appeared to cover up his Steph Curry and Kevin Durant tattoos for Game 1 of the #NBAFinals pic.twitter.com/T3SLyAaNS0

But, once the game was over, Drake couldn’t keep quiet. He got into an argument with Warriors’ forward Draymond Green. It’s unclear what he said, but at one point it looks like he called Green “trash.”

Green downplayed the interaction in a news conference after the game. “We talked, we barked a little bit but I wouldn’t necessarily consider that a scuffle,” he said.

Drake’s behaviour will be put to the test again at Game 2 on Sunday night.

by Hannah Alberga via blogTO
Posted by Arun Augustin at 9:00 AM