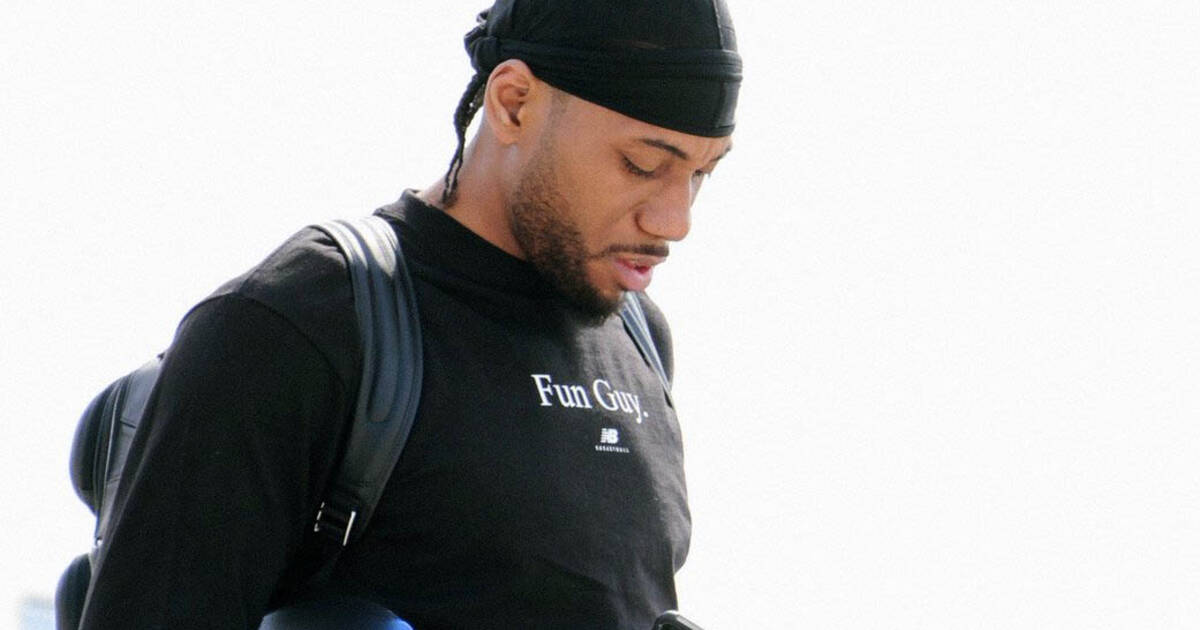 Toronto Raptors star and saviour Kawhi Leonard just made New Balance — as in the manufacturer of shoes worn by dads in Ohio — one of the most coppable streetwear brands in existence. At least for now.

Ask the hundreds, if not thousands of hopeful NBA fans who weren't able to score one of the company's new "Fun Guy" t-shirts this weekend.

Lines outside of several stores in Toronto this morning ... not for a shoe drop, but for “Fun Guy” shirts. pic.twitter.com/06ALB81tBN

New Balance recently tapped Leonard to be their new spokesperson in a move that's proven as brilliant as Leonard is talented. The brand's first signature Kawhi Leonard sneaker pack, released earlier this month, sold out within minutes.

On Saturday, a new merchandise drop had fans lining up for hours in Toronto to score what might be the hottest item from the basketball player's entire New Balance line: A t-shirt with the notoriously affectless Leonard's most quoted-ever press conference quip.

Kawhi tells us everything we need to know about him. 😂

The cheeky shirts were released only in Canada, and only in five locations across Toronto.

Quantities were clearly quite limited, with some stores receiving as little as just 40 of them from New Balance.

Trying to get one of those New Balance Kawhi Leonard “Fun Guy” shirts? Good luck. This is the line at Sportchek Maple Leaf Square. @NewBalanceCan @SportChek pic.twitter.com/95GTM4hkyx

Few fans were successful in scoring "Fun Guy" t-shirts ahead of what turned out to be a victorious Game 6 for the Raptors against the Milwaukee Bucks.

The city was absolutely thrilled to see Toronto's team advance to the NBA finals for the first time ever, but some individuals are less than pleased about being unable to get a shirt.

Waited an hour in line outside at the Livestock store in Roncesvalles for the New Balance Kawhi "Fun Guy" shirt. Bro never again😐 Sold out midway thru the wait...fml

From Roncesvalles to Maple Leaf Square, fans waited in all sorts of gross weather for just a chance to purchase one of the limited-edition New Balance pieces.

Fans who tried to get the shirts online had an even tougher time. The item is said to have sold out within just one minute of going live on the footwear brand's website.

New Balance just dropped a limited supply of ‘Fun Guy’ shirts on their Canadian site, and they sold out in less than a minute. I think the country is in love with Kawhi Leonard.

Of course, such exclusivity does afford some advantages to those who managed to get one of NB's new "Fun Guy" shirts.

Can somebody I know in Toronto pick me up a "Fun Guy" shirt in size M (or L if they don't have M). I will pay you double (or triple) whatever it costs you (I am not expecting anyone to take this seriously but, you know, shoot your shot). https://t.co/Trdyoq1adz

Hardcore fans are offering to buy the shirts for up to "whatever it costs" on Twitter right now.

Play your cards right and you could make a mint — though that would mean having to part with what's an admittedly covetable new t-shirt.

by Lauren O'Neil via blogTO
Posted by Arun Augustin at 9:01 AM