Pretty much everyone in the U.S. wants Toronto to win the NBA Finals 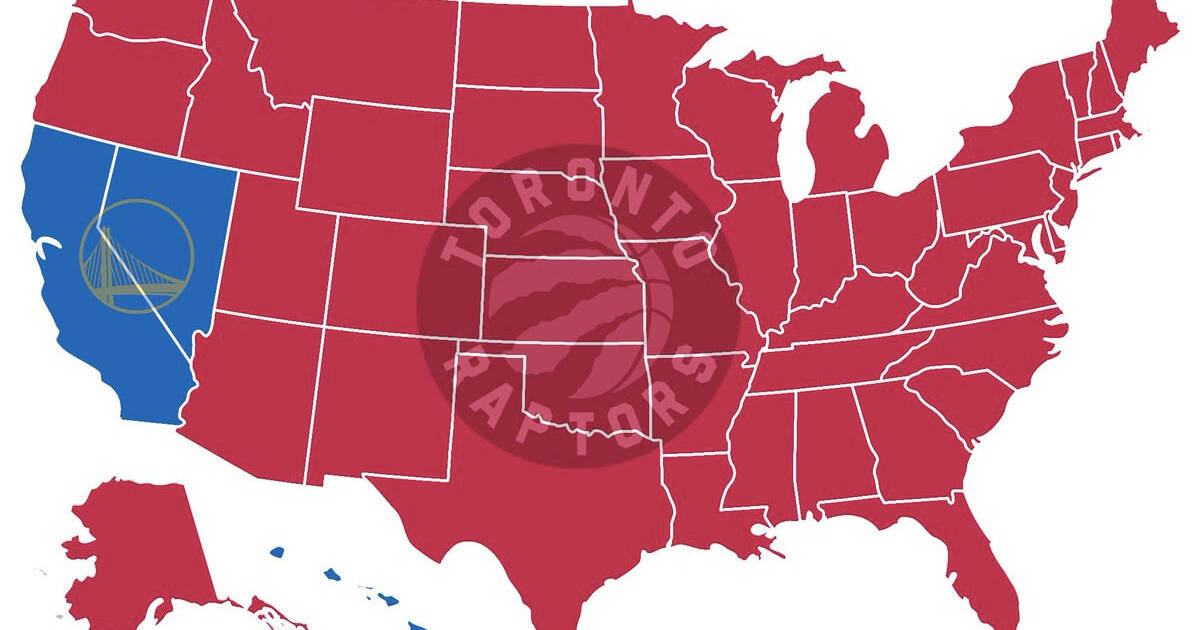 It's no secret that Canadians are over the moon about their Toronto Raptors making the NBA Finals for the first time in franchise history, but who'd have thought Americans would be rooting for the North (or at least rooting against Golden State) as well?

The popular, Panama-based online gambling platform BetOnline just released an analysis that suggests the majority of people in all but three U.S. States are hoping for Toronto to win this year's championship.

Using geotagged Twitter data and each team's most prominent fan hashtag — #WeTheNorth for The Raptors and #DubNation for The Warriors — BetOnline determined that support for The Raps outweighs support for their soon-to-be opponents in every state right now save for Nevada, Hawaii, and Golden State's home of California.

Almost every state in the United States is rooting for the Raptors to beat the Golden State Warriors #Toronto #WeTheNorth pic.twitter.com/9RVJNCrQr6

"The Golden State Warriors are going to their fifth-straight NBA Finals, which means America's Warriors fatigue and resulting hatred is about to get even worse," explains SFGATE's Eric Ting.

"It's hard to say from Twitter data why there is so much more excitement surrounding the Raptors," he continues, "but it's not too surprising that the nation would like to see someone other than the Warriors win the title."

Fair enough, but the far-reaching impact of Raptors hype shouldn't be discounted. Their de facto mascot is, after all, the biggest recording artist in the world.

The Golden State Warriors will face the Toronto Raptors in the #NBAFinals pic.twitter.com/2JtcwwHKKh

Star forward Kawhi Leonard, himself a California native, is also drawing much attention and praise for his stellar playoffs performance with some analysts going so far as to call him the most important player in this year's NBA Finals — yes, even more important than Steph Curry and Kevin Durant.

Game 1 of the Raptors vs. Warriors series in Toronto on Thursday night will furthermore be the first-ever NBA Finals game played outside of the U.S., which is huge.

Will Toronto break Golden State's reign over the NBA after two consecutive championships? Hard to say, but Canadians certainly aren't alone in hoping so.

by Lauren O'Neil via blogTO
Posted by Arun Augustin at 8:55 AM