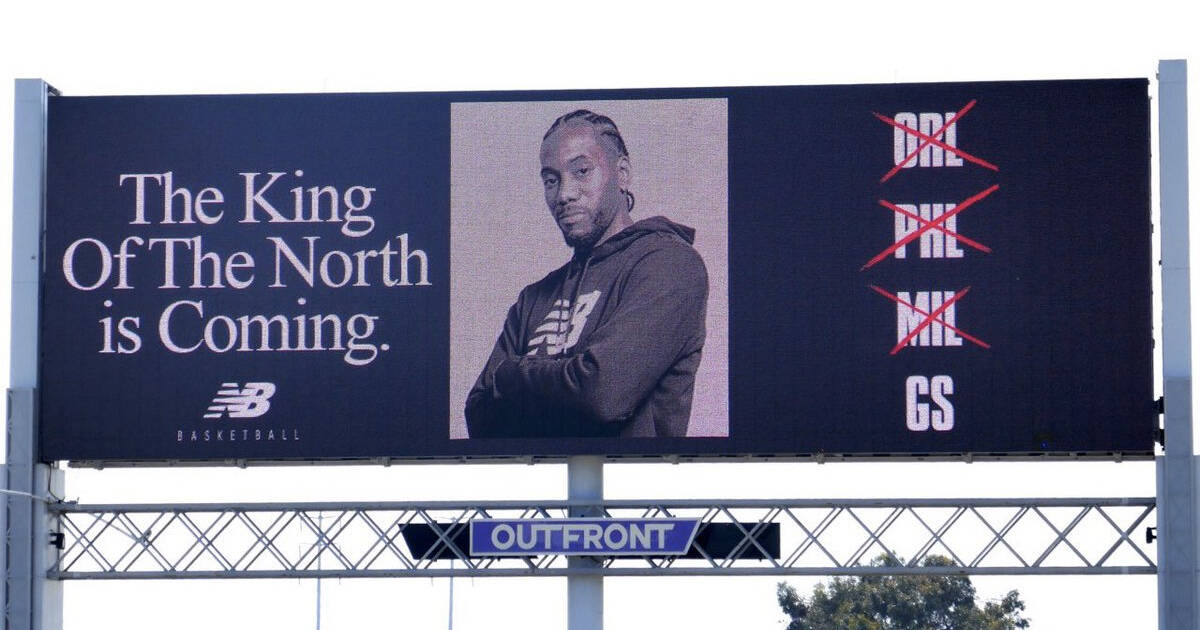 The Raptors vs. Warriors smack-talk-fest that's been running alongside this year's NBA Finals just reached a new level of petty, all thanks to a footwear brand that prides itself on making dad shoes.

You can't make this stuff up, but you can (and should) respect the heck out of New Balance for capitalizing on the success of their hot-as-fire spokesperson Kawhi Leonard.

Not even 24 hours after the Toronto Raptors stomped the Golden State Warriors in a history-making Game 1 on home turf, New Balance erected a foreboding billboard featuring Kawhi Leonard above an Oakland, California higway.

"The King of the North is Coming," reads the billboard, which was first spotted Friday morning and features a photo of a stoic-looking Leonard with his arms crossed.

Beside the photo are a series of of acronyms representing teams the Raptors had to beat out during this year's post-season to win the Eastern Conference championship: ORL, PHI and MIL are all crossed out with red exes.

A "GS" representing Golden State has yet to be crossed out, but the ad suggests it will be next.

The messaging is clever with its not-so-subtle nod to Game of Thrones, but its placement in The Warriors' home city of Oakland? That's downright savage — and people are loving it.

New Balance is really nailing their marketing with Kawhi. https://t.co/ii6K9Dyr5F

And they're loving to make parodies of it.

Wow, I just saw the Kawhi Leonard billboard New Balance put up in Oakland and let's just say it's going to ruffle the feathers of more than a few Warriors fans. pic.twitter.com/0lkOSJc5hw

Even the salty west-coasters who are jealous of Toronto are taking part.

The Raptors take on the Warriors in Game 2 of the NBA Finals at Toronto's Scotiabank Arena this Sunday.

After that, it's off to Oakland for Game 3 on Wednesday night.

The King of the North who, ironically, hails from California, will no doubt be throwing some shade of his own on The Warriors just by playing.

by Lauren O'Neil via blogTO
Posted by Arun Augustin at 11:45 AM