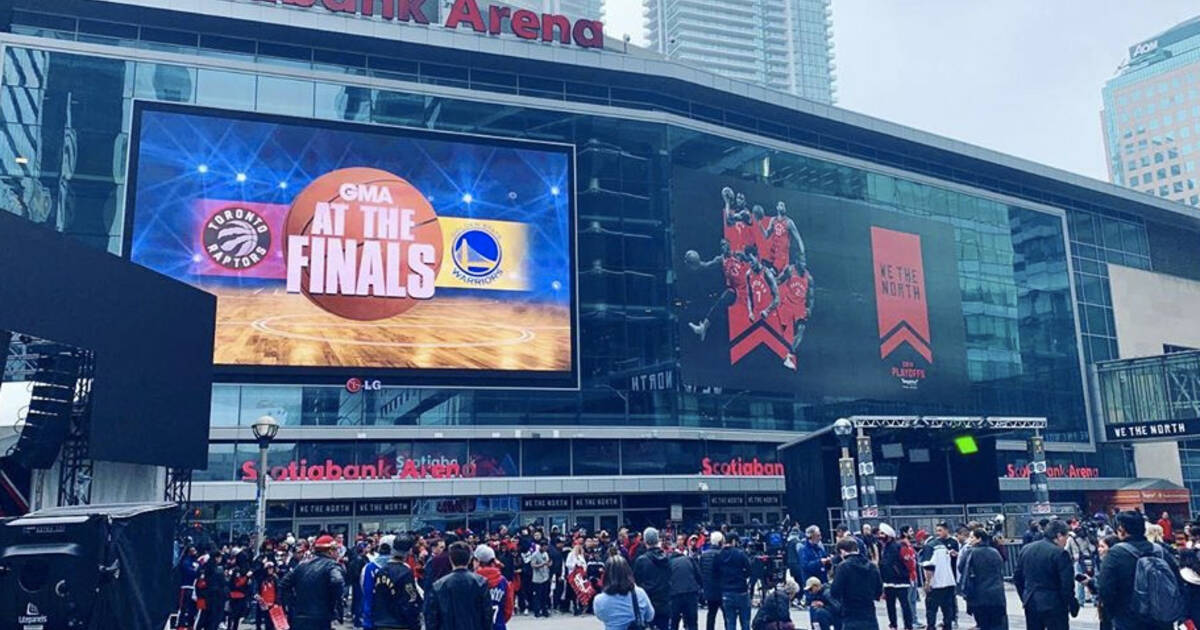 Hoping to post up outside Toronto's Scotiabank Arena this evening to take in Game 1 of the NBA Finals? So are like, a million other people — but spots in Jurassic Park, official home to the Raptors fandom, are as limited as they are coveted.

Look no further for evidence of this than Maple Leaf Square itself, where people have been lining up to secure first-come, first-served admittance to the fan zone since 4 a.m. on Thursday morning, a full 17 hours before tipoff.

Raptors fans were lined up before 7 a.m. to get into Jurassic Park ahead of Game 1 of the #NBAFinals 😳

The Raptors are set to take on the Golden State Warriors this evening at 9 p.m. in what will be the first ever NBA Finals game played outside the U.S., and the first ever finals bid for a Canadian team.

What's 17 hours of waiting, in the span of a lifetime, to be a part of history?

Y’all, give it up for Brandy Exner.
👏🏽👏🏽👏🏽👏🏽
She was first in line to get into Jurassic Park and has been waiting since 3:55 am!
I asked how she’s going to survive being here for more than 20 hours. @globalnewsto #WeTheNorth pic.twitter.com/WCji7HmHgl

Hardcore Raptors fans are currently lined up around the block waiting for a chance to get into Maple Leaf Sports & Entertainment (MLSE)'s official Raptors tailgate party.

Some have even gone so far as to set up tents outside Scotiabank Arena.

Are you waiting in line for the Jurassic Park? #RaptorsvsWarriors pic.twitter.com/G3Dz5cTLZj

Needless to say, leaving work a few minutes early to get to the venue for 5 p.m. isn't going to cut it this time around.

Taking in a little #jurassicpark this morning #Toronto #Raptors pic.twitter.com/ScVzJBJmDG

Those who were already in line before 8 a.m. (and there were many) got rewarded for their loyalty to the team with a visit from former Toronto Raptors star Chris Bosch.

We at Jurassic Park 🦖 #WeTheNorth pic.twitter.com/iuGDkUeZ7u

There's still a chance of getting into J-Park for Game 1 this evening, though the longer you wait, the slimmer that chance gets.

As of 8:30 a.m., hundreds of people could already be seen gathered in the square, where Good Morning America is currently hosting a live show.

Fortunately, Jurassic Park isn't the only option people in Toronto have when it comes to watching the game among other screaming fans.

Pretty much every sports bar in the city will have the game on their big screens tonight, and Cineplex has teamed up with MLSE to broadcast the finals at 33 of their theatres across the country.

Those who really want to catch the action outdoors outside the game itself can show up to the area surrounding Maple Leaf Square, where additional screens will line Bremner Blvd. for overflow from Jurassic Park.

"For the safety of our fans and to be mindful of ongoing construction in the area surrounding the arena, fans are encouraged to ride the TTC and GO Transit when heading to Maple Leaf Square," notes MLSE. "Additionally, all businesses are open to the public on Bremner Blvd. during tailgates."