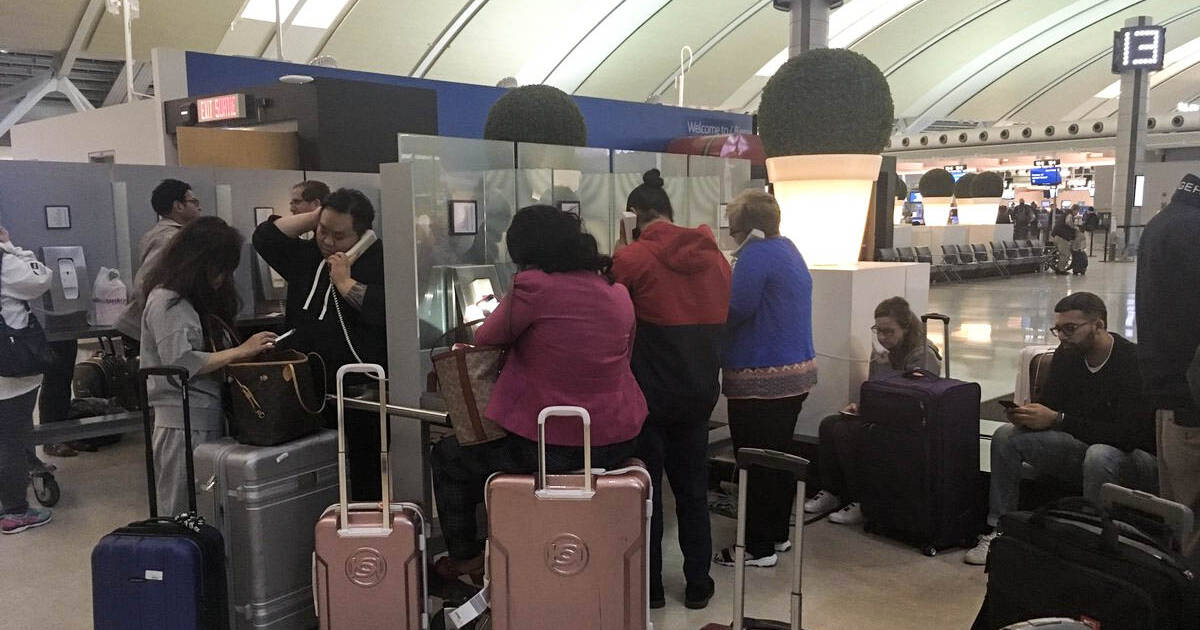 Hundreds of airline passengers across North America are furiously scrambling to reschedule meetings, appointments and vacations this morning after a "technical issue" forced Air Canada to delay or cancel more than two dozen flights out of Toronto alone.

"We're working to resolve this issue," said Air Canada. "We thank customers for their patience."

So, an @AirCanada employee just told us the system that has grounded every flight at #Pearson for the past two hours is a North America wide system failure. That’s got to be newsworthy and it’s got to be a problem. #flightdelay pic.twitter.com/5dyM2eP9bt

Customers weren't feeling all too patient, however, as the night wore on with little communication from staff and a fast-dwindling supply of free pretzels.

Quick update: Two hours in and no updates from @AirCanada at Pearson. The initial excitement of free pretzels is wearing off and would-be passengers are losing hope. The good news? There are still five boxes of apple juice left on the pretzel cart. More as the story develops... pic.twitter.com/ittUAPIYtQ

And Toronto's was far from the only airport impacted by the Air Canada computer glitch.

I am in the 7689 flight Boston to Toronto. Cancelled. They are telling us to get out bags and go and try to call tomorrow. What? Who is going to pay for the hotel? Inconveniences? I am a poor graduate student. pic.twitter.com/T6VGOloxtA

People flying both into and out of Canada were stranded — and in some cases still are — without even knowing why.

We are in Mexico City and we have no idea if we are going to fligth or not, we have been stand for almost 3 hours, and the only thing your personal said is “please be patiente” by the way I have no hotel if we don’t fligh Today

Those who tried to rebook their flights were met with Air Canada website problems, unanswered phone calls and a shortage of customer service agents at the airport.

This is the “help” @AirCanada provided for the hundreds who’s flight was canceled last night. Been at the airport for 10 hrs and no answers. Never again pic.twitter.com/RQ7D7Dsy1a

Air Canada did announce early Wednesday morning that its systems were "beginning to come back online," though flight delays and cancellations were still to be expected.

You all have been saying that things are starting to work again, but the systems are still completely down in Toronto. I can’t make calls in canada, the pay phones aren’t working well with the customer service line, and I have now been traveling for 48 hours straight w/out sleep

As of 9 a.m. on Wednesday morning, passengers are still reporting technical difficulties with checking in and changing flights.

The line to check in for Air Canada this morning after the airline experienced technical issues last night. Some people just waiting in line bc they weren’t able to print their baggage tickets. Spoke to a woman who was stuck here all through the night. Details on @morninglive pic.twitter.com/1dgcDZ7UW7

Air Canada maintains that it will service all customers as best it can.

"We intend to operate our full schedule today plus five extra flights and some upgauged flights (larger than normal aircraft) in order to move customers affected last night," said a company spokesperson to CBC News by email.

Well @AirCanada you rock it again. 2 hrs late arriving in Montreal, tell us to go to gate 12 to go to QC and staff have no clue. Now sent to customer service to rebook! This is insane and no longer taking calls or website inquiries. #stepupyourgame I want @WestJet #mistakesmade pic.twitter.com/Msjg89J1Nq

July 15 can't come soon enough for Canadian airline passengers who, soon, will have some actual recourse in these types of situations.