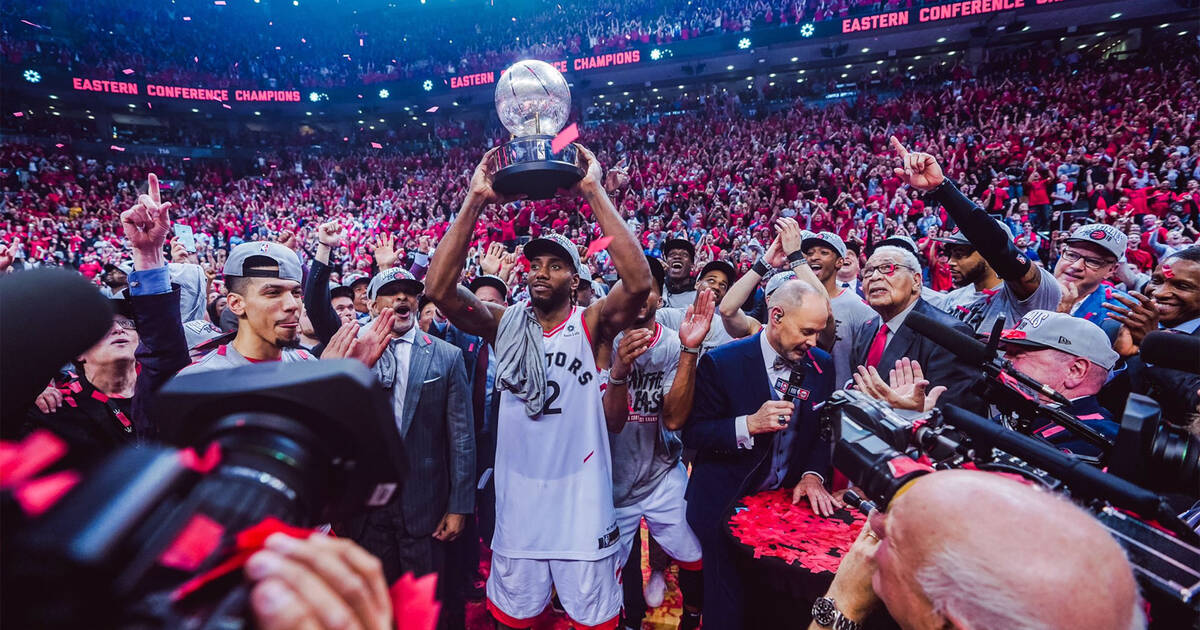 The Raptors fandom is in a frenzy right now.

We're about to face the Warriors in the NBA Finals—the first time in franchise history—and Saturday's Game 6 win saw apocalypse-level street parties like Toronto hasn't seen (at least not since the Jays won the World Series.)

But if you're trying to see the Raps play a game that will inevitably go down in history, be prepared to fork out more than $1,000—for the crappy seats, too.

GUYS I'M IN FOR THE PRESALE BUT STANDING ROOM TICKETS ARE LITERALLY $756 😫 #WeTheNorth pic.twitter.com/afzMFHZmnQ

Pre-sale tickets for Game 1 against the Warriors at the Scotiabank Arena this Thursday only just went on sale today, but look up tickets on Stubhub, and the cheapest nosebleed seats are already selling for around $1,029 CAD.

Dear @MLSEFoundation - as a hard core Raptors fan I couldn’t have been more excited about their championship birth. Went to buy tickets for the NBA Finals and was shocked to see the prices ... totally inaccessible to 99.9% of the fan base ... we sat lower bowl for Semis ...

At this point, baseline seats are averaging a whopping $3,500 CAD. Courtside seats have come and gone for more than $30,000 each.

Just checked out Raptors #NBAFinals ticket prices. Face value for upper level corner, second row from the back... $1000 Cdn. That’s obscene. That said, the place is sold out so... can’t blame them. #WeTheNorth

If you can't en afford the Standing Room tickets, don't even think about going to Game 2 on Sunday, June 2.

They literally quadrupled the price for tickets to the NBA finals

Potentially the Raptors' final home game of the season, ticket prices are going up there: there are lower sideline seats (not even courtside) selling for more than $8,500 CAD.

me calculating how much I’ll have in my bank account after I purchase a raptors finals game ticket pic.twitter.com/XEEXXUpDQ3

This isn't at all surprising, given it's the first time Toronto (meaning Canada) has ever made it to the Finals, but still, it hurts when you see those prices compared to how much a ticket costs for a game in Oakland.

It’s cheaper for me to buy tickets in the second bowl AND a flight to SF than nosebleed seats in Toronto for the NBA Finals. pic.twitter.com/JP2EvuMKGw

Games 3 and 4 are happening in the Oracle Arena on June 5 and 7 respectively, and they're hundreds of dollars cheaper than our home games.

If you want to pay $800 to stand and also see the raptors then buy tickets to the NBA finals! #RaptorsvsWarriors

Stubhub is offering Game 3 seats in the Upper Levels for just over $650 CAD—pretty much twice the price of equivalent seats in Toronto.

MLSE is absolutely gouging fans for the NBA Finals tickets. The cheapest seat I saw -- basically obstructed in the rafters - was about $700 face value.

We get it, this isn's the Golden State Warriors first Finals rodeo, but Toronto fans are really going to feel this one in their wallets. That's okay—Raptors fans are used to feeling the hurt before experiencing the glory.

by Tanya Mok via blogTO
Posted by Arun Augustin at 1:51 PM