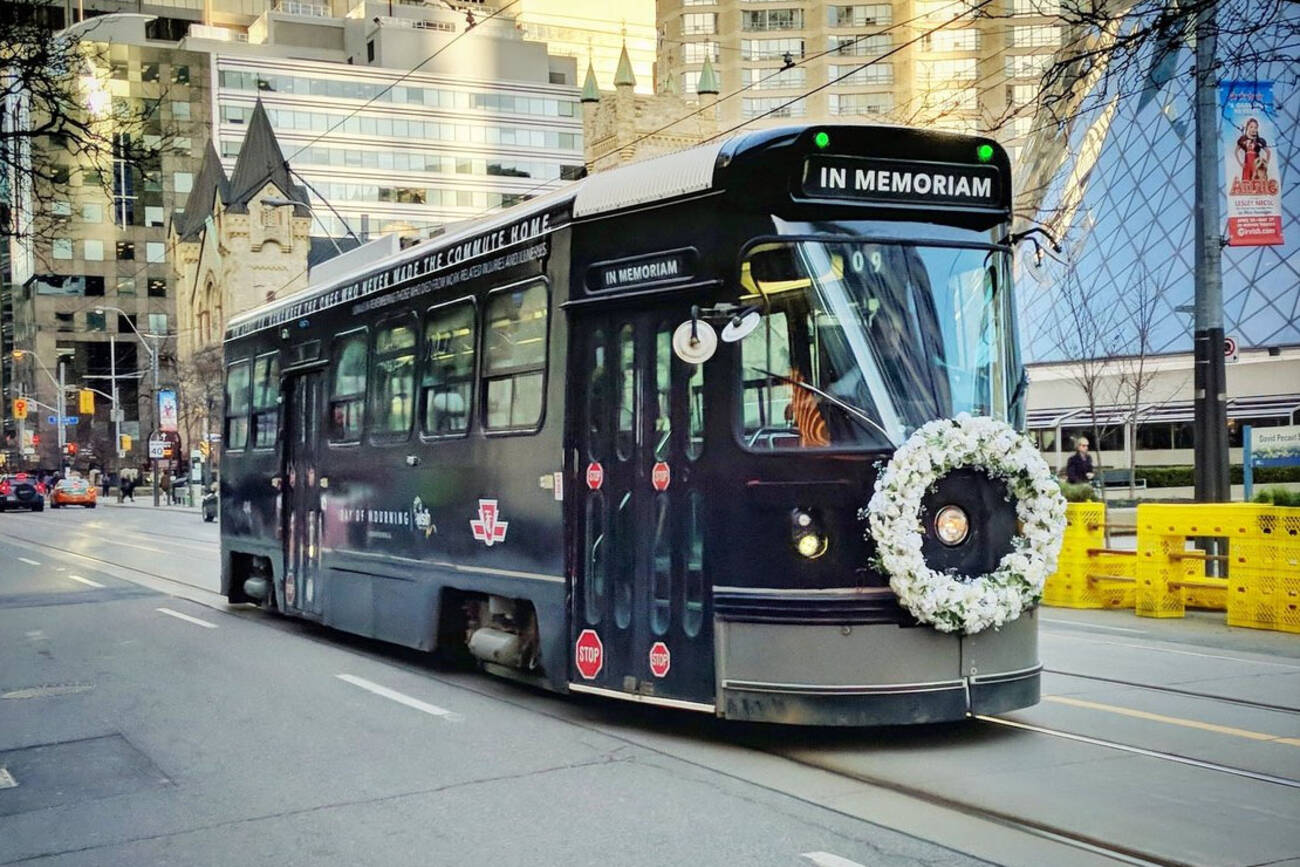 This Saturday has been deemed a National Day of Mourning across Canada for the many people who were killed, injured or stricken with serious illness at work in 2017.

Ontario's Workplace Safety and Insurance Board reports that 227 people in our province died from work-related injuries or illnesses last year alone.

"Every year millions of Ontarians go to work. And every year, too many of them never make the commute home," reads a video published by the Ministry of Labour agency earlier this month.

"On April 28, we remember the ones who never made the commute home. The ones who died from work-related injuries and illness."

Last night an empty streetcar drove through #Toronto in memory of those who died or were injured in the workplace and never made the commute home @WSIB #DayOfMourning https://t.co/UFNDfIy9MM pic.twitter.com/fUs805EN88

To raise awareness for the Day of Mourning, which was established by the Canadian Labour Congress in 1984, WSIB has chartered a black-wrapped, empty streetcar as a special tribute to those who've died, been injured or suffered illness in the workplace.

"The empty streetcar is running in advance of the Day of Mourning on April 28 to maximize public awareness of the Day," reads a press release from WSIB, encouraging people to look out for the vehicle during rush hour on April 26.

The #DayOfMourning streetcar is currently running. We are paying tribute to those who never made the commute home because of a workplace tragedy. Learn more at https://t.co/sx4Z0Z7xkK pic.twitter.com/V2U30XGxUm

"The WSIB is helping us all remember those who died on the job... those who didn’t make the commute home. Saturday is a National Day of Mourning in remembrance of those workers."

Indeed, people have been seeing the streetcar around.

@TTChelps I saw an “In Memorium” streetcar on King St (WB) this evening. It didn’t seem to be making stops… what was it for? pic.twitter.com/XdNCIX4BLt

Though some are confused as to why it exists. Some local residents are, understandably, mistaking the WSIB campaign as a tribute to those killed and injured during Monday's tragic van attack near Yonge and Finch.

Just choked me up a little on Queen Street: @TTChelps Streetcar decked out in memorial colours. #TorontoStrong #Toronto pic.twitter.com/3euSIgaUgP

The Canadian flags at Queen's Park in Toronto, as well as those at Parliament Hill, will fly at half-mast on April 28th.

Those who are interested in commemorating the day are invited to observe a moment of silence at 11:00 a.m. on Saturday, or attend a community event to hear and share stories about how workplace tragedies have touched peoples' lives.