The top 19 record stores in Toronto by neighbourhood 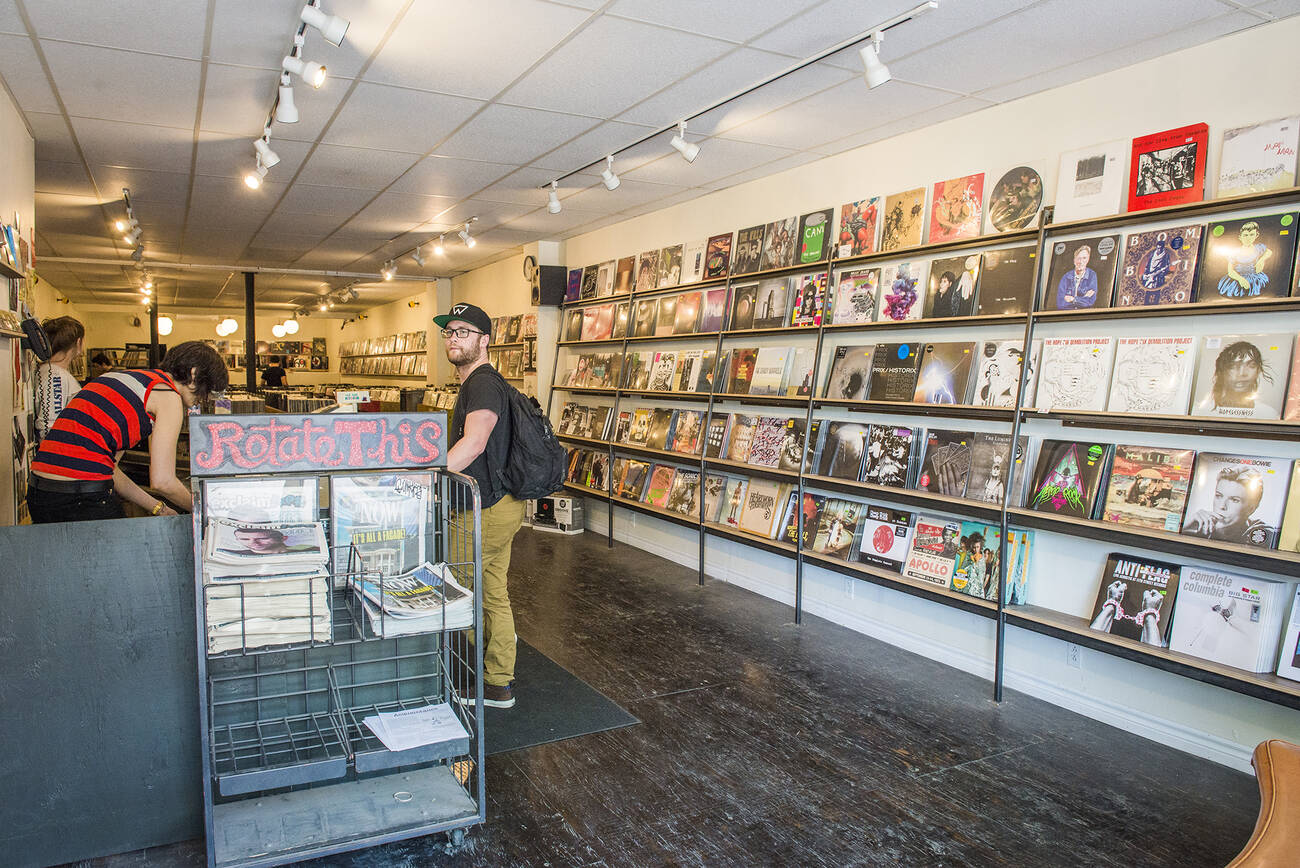 The top record stores in Toronto are where beat junkies go to dig for the vinyl gems worth bragging about. Everyone has their personal favourite spot to scavenge, but these stores are the spot for classics and deep cuts worth adding to any crate digger’s growing collection.

Here are my picks for the top record stores in Toronto by neighbourhood.

With a great section for vintage vinyls and tons of merchandise to peruse, it’s almost guaranteed you’ll find something good at Dead Dog Records. If you’ve been looking for something specific there’s a chance you’ll find it here. They also have a location in Parkdale.

Play De Record has been a Toronto staple ever since its days at Yonge and Dundas. Now at a new location on Spadina, this iconic store is the absolute must for anyone looking for electro, drum and bass, and hip hop. 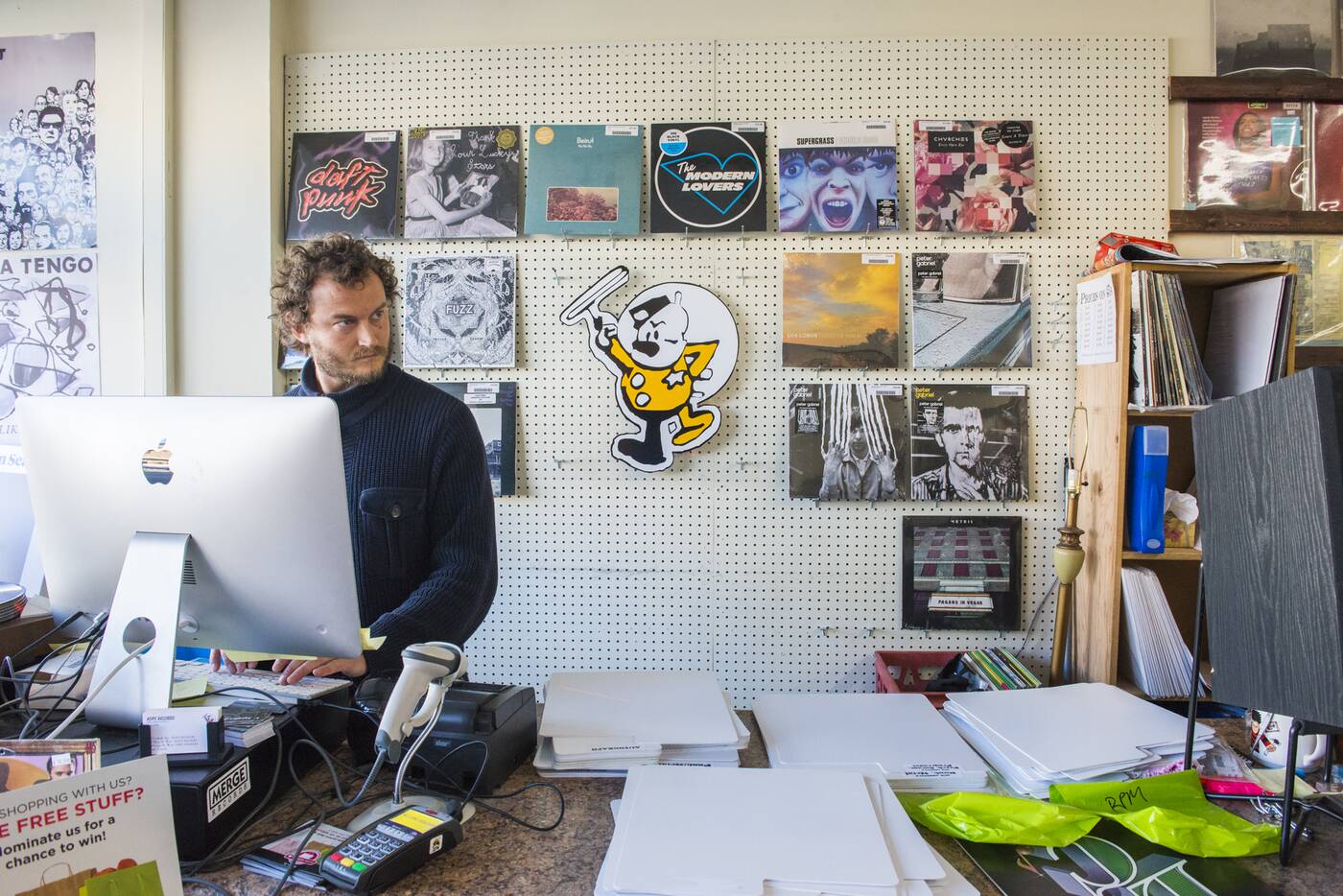 Kops Records on Danforth East is one of three Toronto locations for the local chain. Photo by Hector Vasquez.

As a former Sam the Record Man franchise, Mike’s Music is a Danforth favourite. This little interior can get cluttered at times but the staff here are music buffs who know their stuff.

Kops Records moved into its original location at Queen in the 70s and has transformed over the years from a vintage vinyl store to a collector’s hub selling every genre of rare finds. They have multiple locations in Toronto but this one is arguably the best of the bunch.

You’ll find the latest presses from Japan at Grasshopper Records, a store that opens late and closes late. What better way to spend an evening than browse through some old gems. 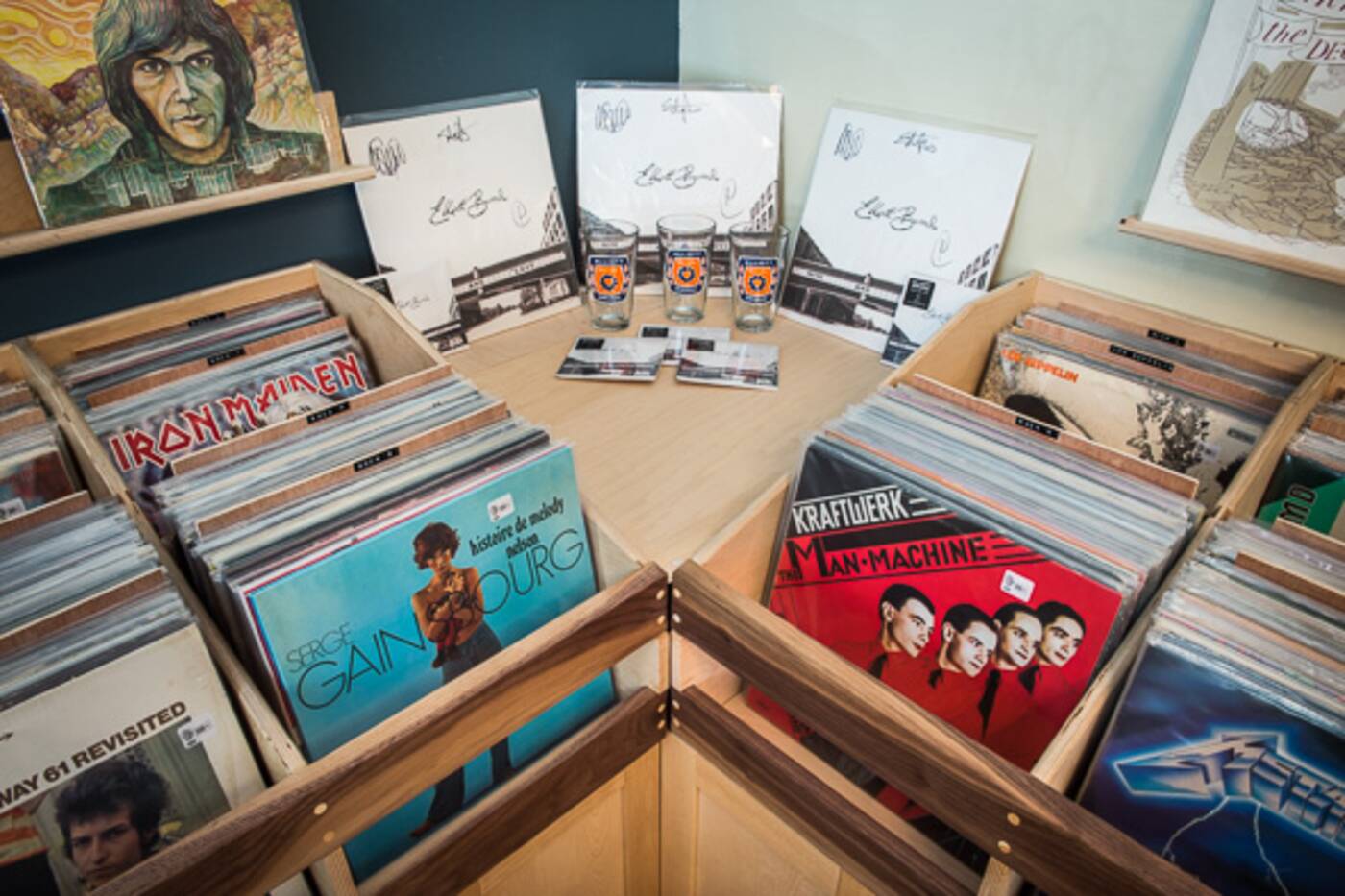 Classic rock and pop are aplenty at Riverside's Tiny Record Shop at the back of Token Gift Shop. Photo by Matt Forsythe.

It may seem way less cluttered – almost bare – than what you’re used to, but Invisible City on Geary is run by two DJs and has more than enough vintage finds from the 80s and 90s.

The tiny Pop Music is small but mighty, stocking stuff you’re more likely to find on iTunes than on vinyl, from pop hits to rock and rap. It’s all new stuff, no used records here.

Both a record store and a cafe, Village Vinyl is the type of place music lovers go to enjoy tunes and a coffee in a super laid back atmospshere; they even have live music every Sunday.

If you happen to love records and are also a fan of authentic Japanese art (pretty likely?), Paradise Bound is the place for you. Prices here are amazing, and the owner, Coyote, really knows his way around the bins. 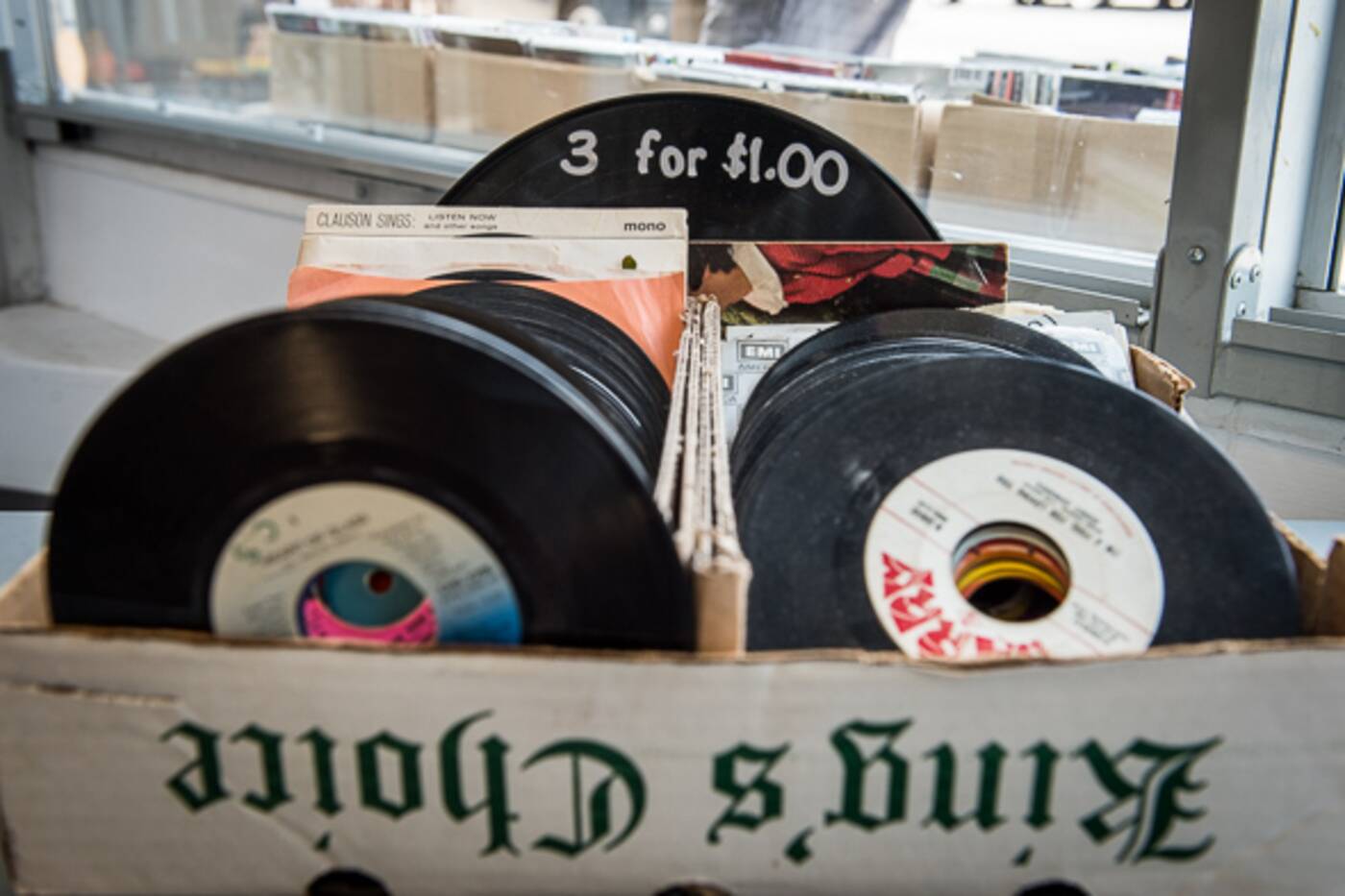 Dead Dog Records in Bloordale has a huge selection of vinyl records to peruse. Photo by Matt Forsythe.

In the Groove is for the collector who’s truly trying to expand their collection. They’ve got over 40,000 records here, and even have a section out back called "the Soul Shack" dedicated to disco treasures.

With really great customer service and good hours, June Records is well organized: perfect for those who want to dig but don’t want to feel like they’re on an episode of Hoarders. Nearby Soundscapes follows a close second, seeing as they're more about CDs than vinyls.

The one stop shop for everything Rasta, TreaJah Isle sells everything from vinyls to black soap. Grab a healthy green juice and peruse their selection of deadstock reggae presses, classics from Gregory Isaacs, and newer records from the likes of Damian Marley.

Just as well known as the spot to pick up concert tickets as it is a vinyl store, Rotate This has been a Toronto mainstay for over 25 years. Even after moving from its original Queen location, it remains a classic go-to for vinyl in the city. 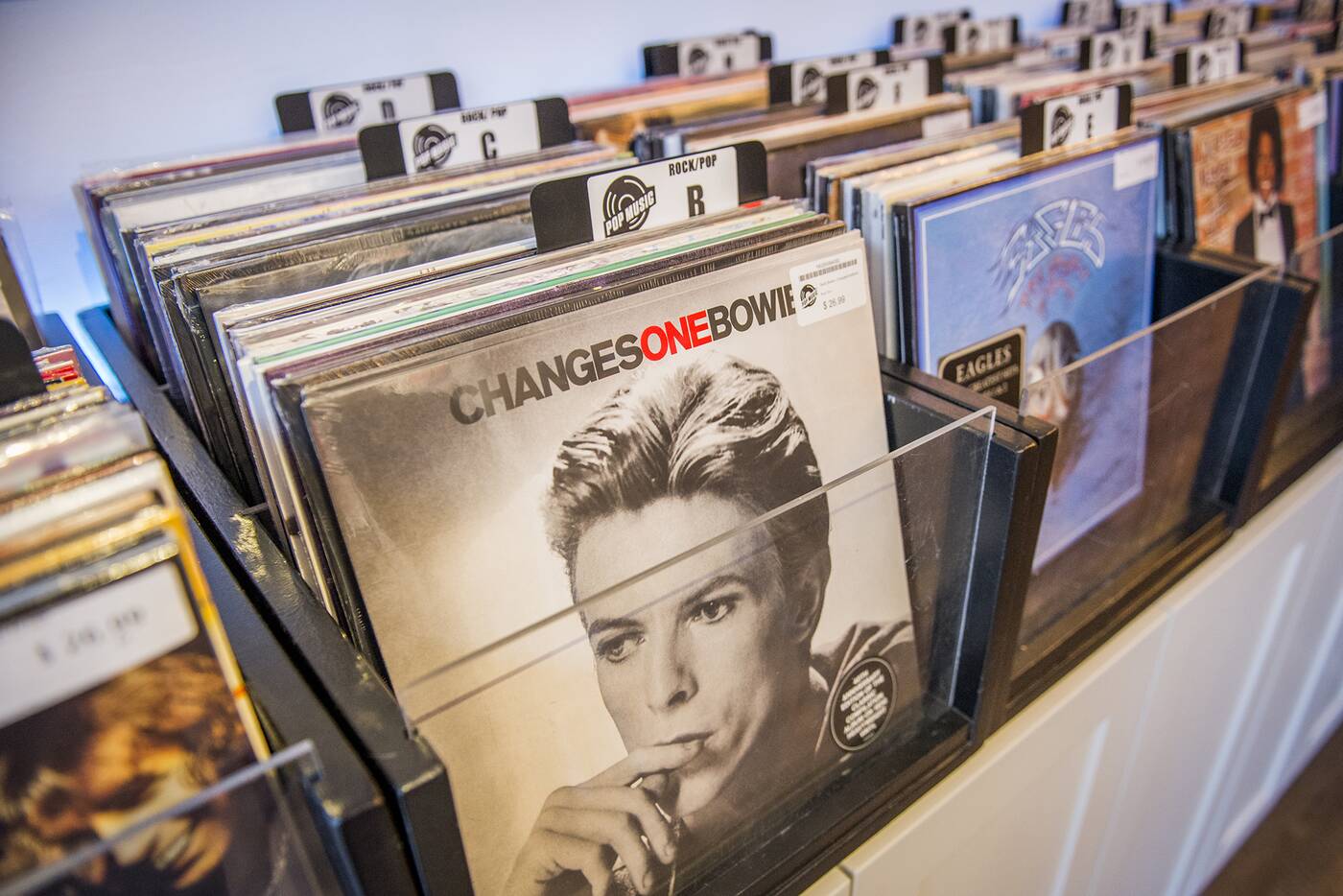 Pop Music has a little something for everyone in its store in East Chinatown. Photo by Hector Vasquez.

If you've never heard heavy metal on vinyl, head to Stained Glass Records, behind a rock-n-roll vintage shop, and cop yourself some Black Hole on vinyl. Basically the only place for metalheads to get their records, this spot has a small but thorough inventory.

Rock, jazz, soul and hip hop are the main tunes at Cosmos Records. It’s tiny in here, but worth the squeeze to find the perfect sample for your next mix. 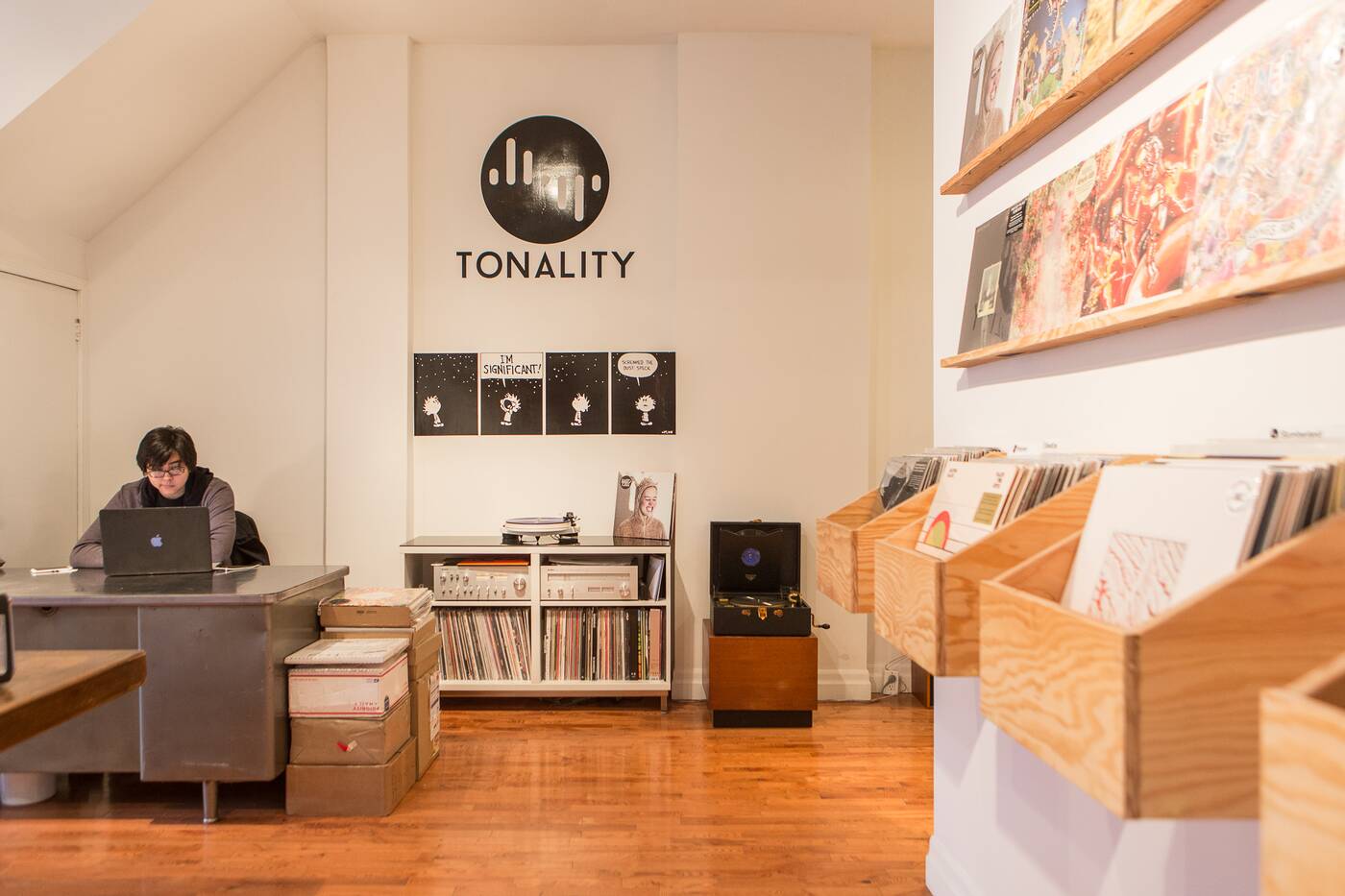 Tonality Records near Dundas and Roncesvalles has a well-curated selection for record collectors. Photo by Andrew Williamson.

Sitting in the back of Token Gift Shop, this store is called Tiny Records for a reason. With an itty-bitty space, you’ll find a surprisingly good number of albums, especially those of the classic rock and pop varieties.

Indie vinyls and hard-to-find records are the main stock at Tonality, along with a good selection of audio equipment. You’ll likely be able to score a used record player in amazing condition; close runner up is book store She Said Boom nearby.

For a real rock den vibe, head to Antikka for country, soul, and hard rock. They’ve got over 1,200 used and new records, and they also serve Armenian coffee, creating a full sensory experience.