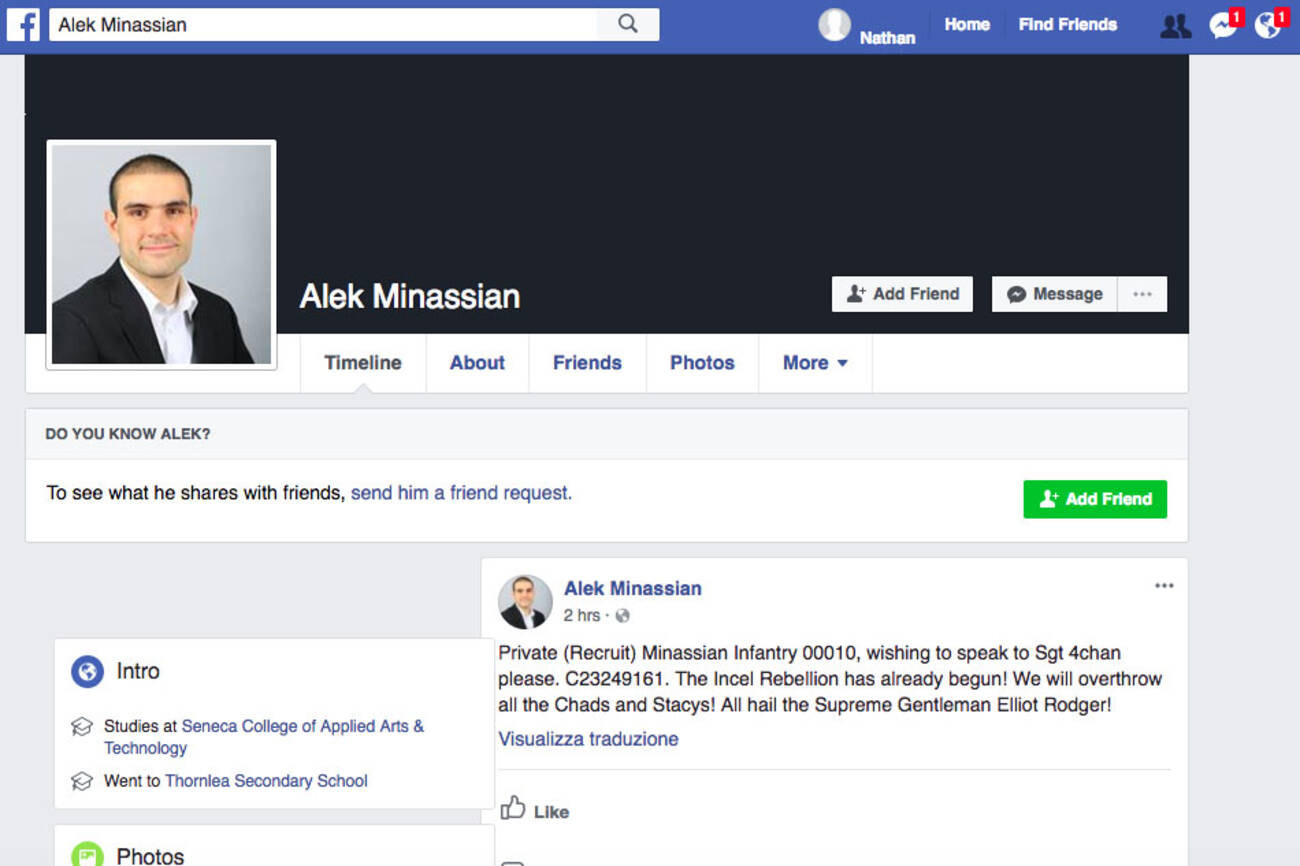 A message posted to Facebook by an account bearing the name and photo of Toronto van attack suspect Alek Minassian has North America's news industry reeling today over whether or not the 25-year-old Richmond Hill man is an anti-feminism extremist.

The post in question first surfaced Monday evening on the message board 4Chan, where someone anonymously shared in an image of a mobile phone showing Minassian's alleged manifesto.

"Private (Recruit) Minassian Infantry 00010, wishing to speak to Sgt 4chan please. C23249161," it reads. "The Incel Rebellion has already begun! We will overthrow all the Chads and Stacys! All hail the Supreme Gentleman Elliot Rodger!"

Many online were skeptical about the veracity of the post, given its source and content, and began raising red flags almost immediately after it was shared on Twitter.

Everything from the message's timestamp and metadata to its liberal use of coded language was pointed out as suspect, especially given 4Chan's well-known habit of pranking media outlets in the wake of national tragedies.

Minassian himself may have actually posted the update, however, before killing 10 people and injuring 15 others in a tragic act of violence near Yonge and Finch on Monday afternoon.

#SourceHacking: The "incel" screenshot shared about the Toronto attacker is from 4chan: https://t.co/U8nOwFEAdj If you look at the time stamp on the uncropped photo it indicates this post occurred after the arrest. Always check the metadata for digital fingerprints. pic.twitter.com/KK17sjnVz8

Facebook Canada confirmed on Tuesday that the post was published to Minassian's "real" profile, although the social network did not say how it arrived at this conclusion.

A representative for the company explained by email that Facebook had removed the account and that it will similarly delete any content that "praises or supports the perpetrator or the horrific act."

"We don't allow mass murderers to maintain a presence on Facebook," said the representative, "so we have deleted the suspect's account."

So Facebook confirmed to the Globe (as they did to the CBC) that the page belongs to Minassian. But given that trolling is 4chan's MO, we should still be somewhat skeptical that this post was, in fact, written by him. https://t.co/PGhyLaZmOx

Based on Facebook's response, and archived versions of the offending profile, we can rule out the possibility that the original picture was Photoshopped.

What can't be confirmed, at least not yet, is that Minassian posted the message himself.

Toronto Police have yet to release a motive in the case, and no media organization has been able to independently verify that Minassian published the post himself (or when, exactly, the post went up.)

"Facebook makes it possible to backdate posts, leaving the appearance that it could have been written at a very specific time of the day when it was actually written much later," wrote the Globe and Mail on Monday.

People are focusing on Toronto killer Minassian’s “incel rebellion,” but he’s also directly addressing /pol/ — this Facebook post is indistinguishable from a 4chan shitpost. Which makes this maybe the first ever act of ironic terrorism pic.twitter.com/SlgXzajWrr

Groups on 4Chan and Reddit are branding the message as fake and blaming it on each other, saying the post is an attempt to defame the "incel" community, which was recently banned from Reddit over accusations of misogyny and promoting rape.

Its members, which by some estimates run close to 40,000 deep, are known to use the names "Stacey" and "Chad" as pejorative terms for women who won't sleep with them and men who are sexually active, respectively.

"This was done so the media can bring into the public conversation the idea that 4chan is some radical extremist website that needs to be shut down," wrote someone on 4Chan's /pol/ board.

"Isn't the whole incel thing for of an /r9k/ meme to begin with?" asked someone else, referring to another 4Chan board.

Some journalists and experts continue to remind the public that nothing is known for sure about why Minassian is suspected to have driven a van into pedestrians.

Others are running with the content of the post, which praises 22-year-old Santa Barbara shooter Elliot Rodger.

Rodger, who killed six people and then himself on a university campus in 2014, famously posted a "retribution" video on YouTube prior to the attack in which he lamented being a virgin and said that he wanted to punish women for rejecting him sexually.