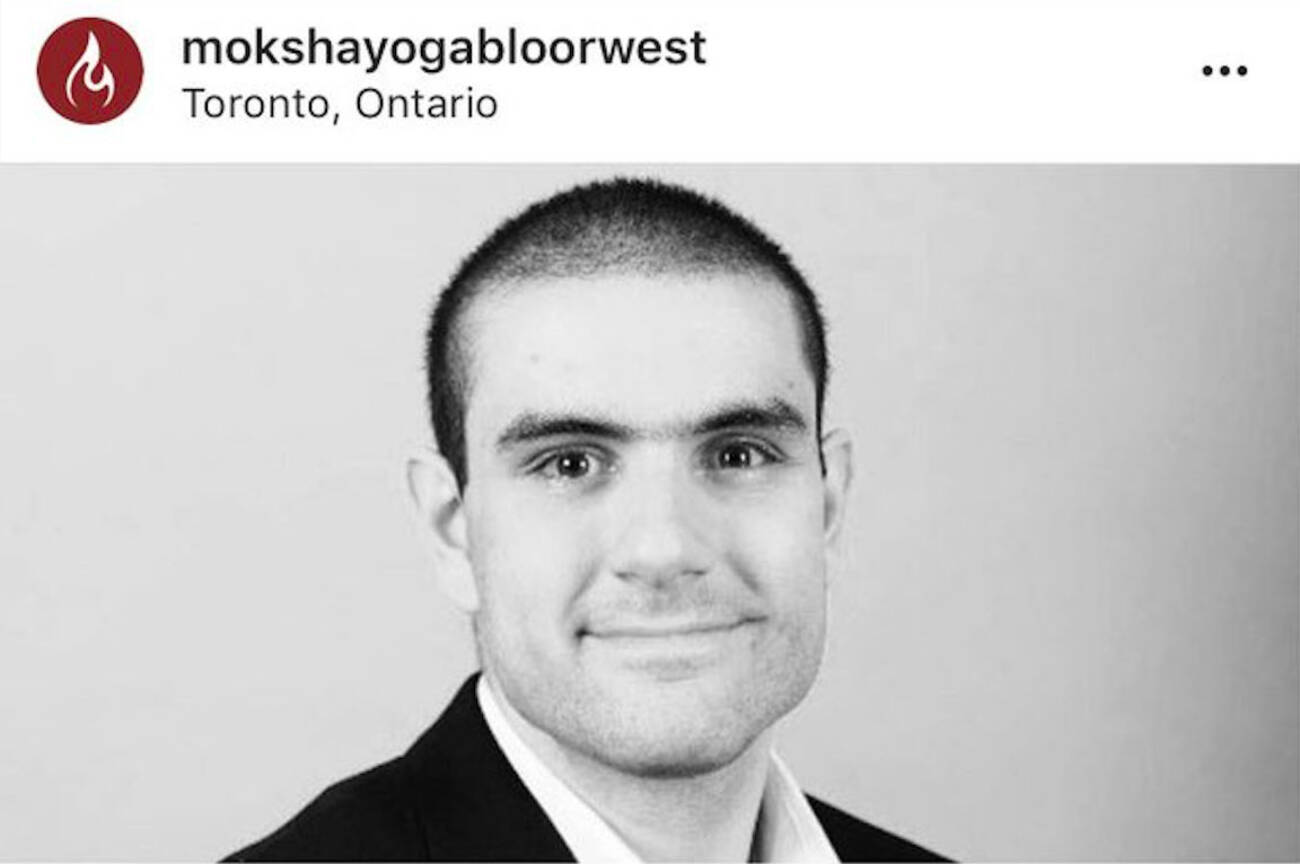 A Toronto yoga studio is coming under fire today for their post on social media that featured Toronto van attack suspect Alek Minassian — just hours after the 25-year-old Richmond Hill man was charged with 10 counts of first degree murder and 15 more of attempted murder.

"Alek is our mirror," reads the ad, which was published by Moksha Yoga Bloor West on Facebook and Instagram around 5 p.m. Tuesday.

"What propels us to bring pain to our family but our own inability to recognize and process our own mental pain? Who of us here has not been there on some level, whether it's a sarcastic comment or imagining death upon another?" 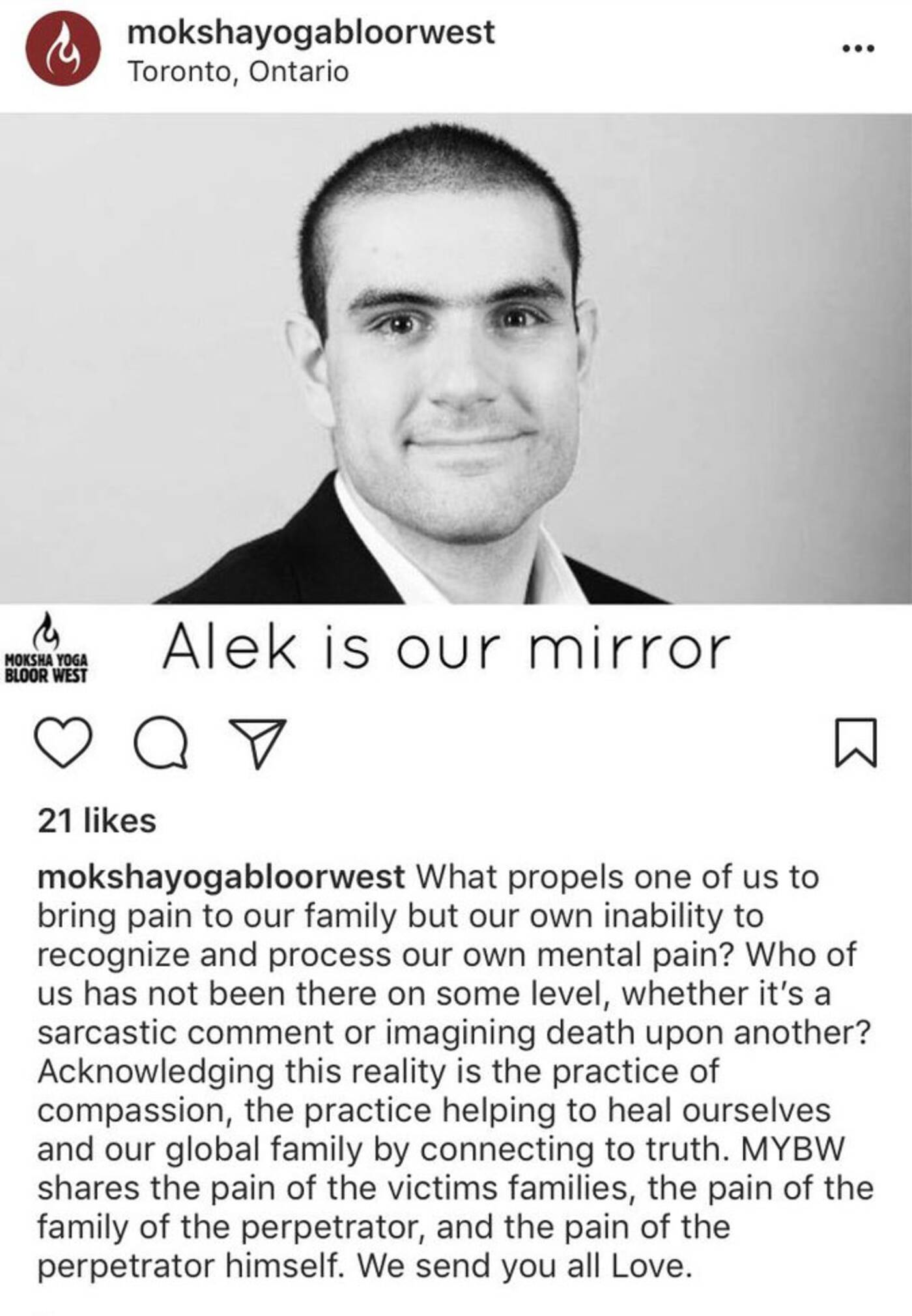 Moksha Yoga Bloor West shocked many in the city by using a photo of mass murder suspect Alek Minassian in an ad just one day after a van attack that killed 10 people and injured 15.

Some of those who shared screenshots of the ad were appalled that a business would use Monday's tragedy to promote goods or services.

"You posted a photo of a murderer and wrote that he is our mirror," wrote one Facebook user on the business's public page."Tasteless, insensitive... I hope you go out of business."

"Shame on you for that abhorrent post," wrote someone else. "I would never recommend a business that attempts to profit off a tragedy to anyone. Disgusting."

Others were more disturbed by the suggestion of sympathy for Minassian in the post's description.

The hot yoga studio, located at the corner of Bloor Street and South Kingsway Road, said that it "shares the pain" of victims' families, first responders, witnesses and — most controversially — "the pain of the perpetrator himself."

"We send you all love," reads the message, which has since been taken down by Facebook.

"People are barely coping with what happened and you think we need to hear your two cents on 'love and compassion' for all parties involved including the accused murderer?" wrote someone in the studio's review section on Facebook.

"Disgusting for posting your sympathies to a mass murderer," wrote another. "Who the f--k do you think you are? Entitlement from teaching yoga LOL. Wow. This business is a joke. Toronto don’t support."

Adding insult to injury, people from the studio started arguing against critical comments on Facebook and Instagram.

Studio manager and yoga teacher Meg Walsh wrote a lengthy (but politely worded) response to one angry Facebook user, who in turn took screenshots of their conversation.

Walsh revealed in that message that the original ad had been written by studio director and teacher Don Christensen.

Multiple other screenshots show that Christensen himself was sending copy-pasted messages to critical users, telling them he was "truly sorry you felt offended by my message."

Long story short(er,) the entire situation is a mess — as one might expect it to be under such circumstances.

Menassian was charged Tuesday morning with 10 counts of first-degree murder and 13 counts of attempted murder in connection with the incident.

He remains in police custody while Toronto tries to recover from Monday afternoon's brutal act of violence near Yonge and Finch.

Moksha Yoga Bloor West has not responded to a request for comment.

by Lauren O'Neil via blogTO
Posted by Arun Augustin at 12:10 PM