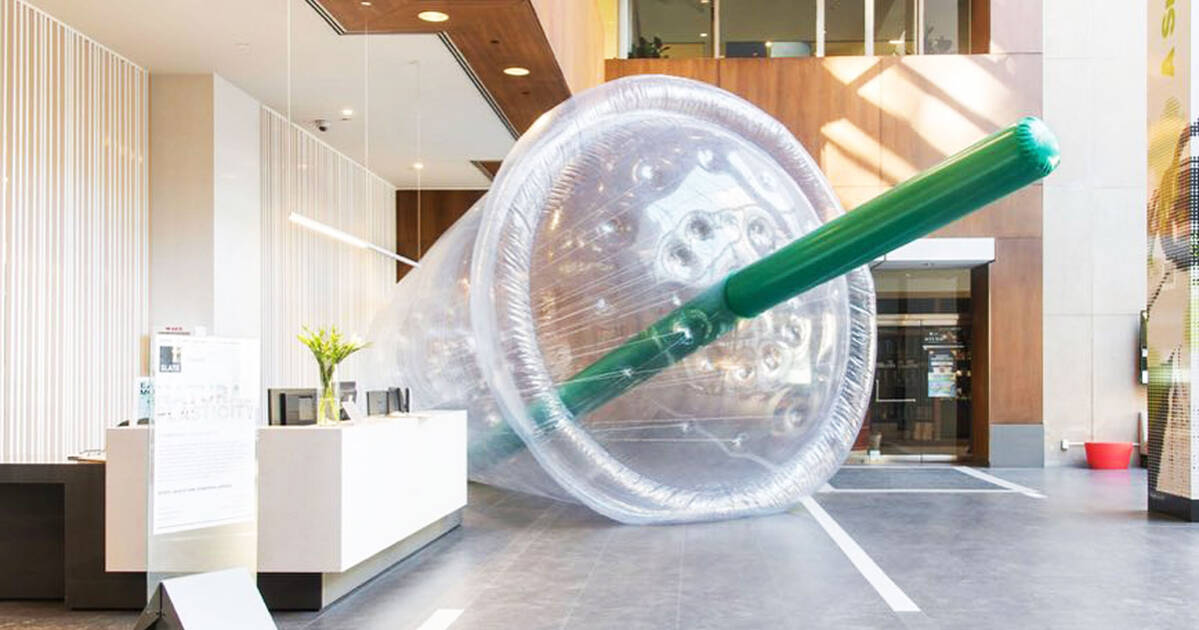 Outrageous installations have been aplenty in Toronto over the last decade, much to the delight of our Instagram feeds. Seemingly, Torontonians enjoy massive and over-the-top public art, hence why people kept installing them in our city streets—in 2019 especially.

Here are my picks for the 10 most outrageous installations in Toronto over the last decade.

In the biggest (literally) oxymoron of the year, a travelling art show aimed at drawing attention to single-use plastics landed in Toronto with a giant inflatable coffee cup and bottle, made from synthetic materials, no less. Art for art's sake, am I right.

People flocked to Brookfield Place this summer to take some selfies with Into the Clouds, an adorable cluster of smiling cartoon clouds hanging from the Allen Lambert Galleria. These fake fluffs definitely added some cuteness to the Financial District.

Forget The Thinker by Rodin, the new symbol for pensiveness this year was the giant thinking emoji. Bringing the curious yellow face from URL to IRL, this massive face hit the Distillery District as part of MOCA's Age of You exhibit.

The strange, zipper-shaped structure called the Serpentine Pavilion was a brief marvel at King and Brant Streets in 2018. Stretching 14 metres high, the innovative design from England curved 27 metres and was around just long enough to host a winter market.

FYI: The world's largest rubber duck will be in Toronto for Canada Day weekend! https://t.co/KqM4L2CeVQ pic.twitter.com/u1PbLz32uV

Rubber duck at the Toronto Harbour

People hated the duck, but people also loved the duck. However you felt about the duck, the bottom line was that it may have cost Toronto and the province collectively around $200K, but apparently it also made the city a whopping $7.6 million dollars. Who ever thought a giant bath toy could be so lucrative?

Giant moon under The Bentway

Easily the most entrancing installation of the year hung right from beneath the Gardiner Expressway. We got a taste of this perfectly to-scale orb earlier in the year at the Aga Khan, but the Bentway's moon was bigger, at seven metres-wide, and stayed up during September's epic full harvest moon.

We all know the best kind of balls are Big Love Balls, and Yorkville got a bunch of them this summer, directly in front of the Coach and Cartier stores. Who needs brand name bags and diamonds when you have big ol' balls.

Slightly adorable yet terrifying was the humongous baby that was installed at Ontario Place in 2018. It was no arbitrary baby, though: it didn't take people long to realize that the 40-foot-tall Jack-Jack was basically an inflatable ad for The Incredible's sequel.

The most beloved Disney character of all hit the old Unilever soap factory in 2017 as part of the 10-day EDIT festival for its inaugural year. Guests got the chance to check out the Mickey-shaped hot air balloon on-site, and even caught it drift a little in action.

What better way to celebrate the Raptors' newly won NBA championship and 25th anniversary than with an homage at Toronto's all-night arts festival. The pair of 18-foot-tall hands by Esmaa Mahmoud and Bryan Espiritu was a main attraction at Nuit Blanche this year, for obvious reasons.

by Tanya Mok via blogTO
Posted by Arun Augustin at 5:08 AM