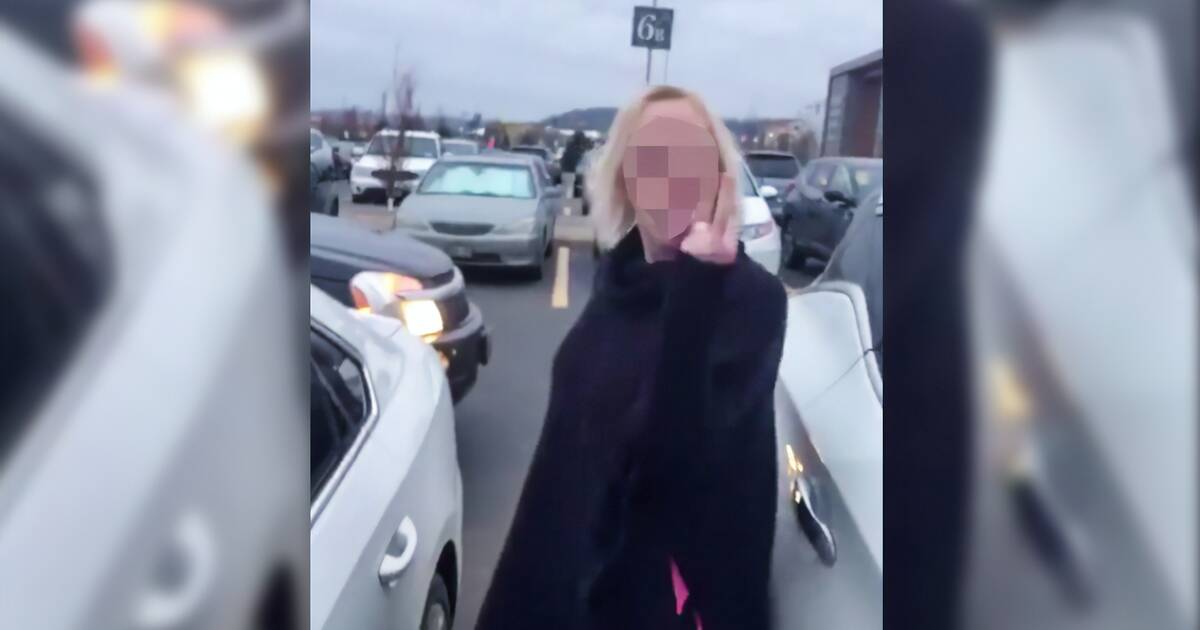 Niagara Regional Police are investigating a nasty altercation between two women in an outlet mall parking lot after video footage was released showing one of said women hurling racial slurs at the other.

The incident is said to have taken place on Boxing Day outside the Outlet Collection At Niagara, an open-air shopping complex in Niagara-on-the-Lake.

Cellphone footage shot by a Chinese woman who emigrated to Canada seven years ago, according to the St. Catherines Standard, starts with a blonde woman screaming "you f*cking ch**k" into the camera.

Her behaviour gets even more abhorrent from there, as demonstrated in the video below (WARNING: Contains racist language.)

The woman filming this video told local news outlets that the dispute began after she pulled into a parking spot that the other woman had apparently been waiting for.

Instead of driving away, the blonde woman got out of her vehicle and confronted the Chinese-Canadian woman (who does not want to be named for fear of retaliation).

She can be seen in the latter driver's now-viral video mocking, verbally attacking and physically striking her.

"You fucking b*tch, get out of here man," says the blonde woman to the Asian woman at one point, hitting her camera phone. "You started it!"

The irate woman goes on to say "you don't know what a signal is? Guess what? Even in China they have signal lights."

She then proceeds to flip off, fake moon and mock the woman in a childish voice, even going so far as to imitate what she thinks someone speaking Chinese sounds like.

Though no kicks can be seen on camera, the blonde woman alleges that the woman filming kicked her at some point. The end of the clip shows the blonde woman calling 911 as someone standing nearby says "can we please just chill?"

The footage was uploaded to Facebook by the woman being attacked, but later deleted. Copies of it, however, have been circulated widely through other social networks.

The person behind the camera is asking in Chinese “did we even hit her?” when the blonde lady was calling the police. I was wondering the same thing bc I’m pretty sure the lady punched first.

"We don't know the details of what happened before the video, but I can't imagine any circumstances where it would be OK to speak to someone like that," said the mall's marketing manager, Carly Rupcic, to the St. Catherines Standard.

"There was a lot of traffic coming through the mall that day. Whatever happened, there is no excuse for that behaviour. We did what we could to manage the situation and help the complainant."

The Niagara Regional Police Service has confirmed that it is aware of the video and that the incident is being investigated as one of several parking disputes on Boxing Day.

"It's safe to say racism played a role in this incident," said Const. Philip Gavin to CBC News. "One could see potentially there may be an assault (charge), but I'm not the primary investigator so I wouldn't want to speculate."

So embarrassed by the actions of some Canadians... Was this truly necessary! She punches the girl but she calls the cops for the girl defending herself. White privilege acting out, entitlement or a racist attack... someone in #Niagara region knows this woman... What say you? https://t.co/eKAfulzF9c

The blonde woman seen in the clip has yet to be publicly identified, but she's not the first Canadian to make headlines in recent years for engaging in aggressively racist behaviour.

In late October, a female shopper in B.C. was filmed berating some Shoppers Drug Mart cashiers for "speaking in Chinese."

Twenty-eight-year-old Talya Davidson was famously arrested and charged with four counts of assault in downtown Toronto this August after screaming racial slurs in Nathan Phillips Square and spitting on at least one person.

Another young woman was caught on camera screaming at an older TTC passenger to "go back to China" last summer, right after a drunk white man went viral for hurling racist remarks at a family near Toronto's Jack Layton Ferry Terminal.

A woman was filmed hurling racist insults at York University students this morning while they waited for the bus - 📹 Sufyaan Dayani #Toronto #YorkU #YorkUniversity pic.twitter.com/KQxxzq2SbA

Yet another person was filmed just last month screaming racial slurs from her car at some York University students, telling them to "get the f*ck out of our country."

"I'm pretty used to facing these kind of things on a monthly basis," said the man filming that video, Sufyaan Dayani, in November. "Subconscious bias exists deep in our hearts and we need to rig that out completely to be able to enjoy 'diversity' in its best forms."

"We need to start accepting the bitter truth about racism in Canada and how many of us still face the daily struggle of being brown."

Let's hope the next decade has fewer (or better yet, none) of these senseless, hurtful acts... though if recent history is any indication, Canada still has a long way to go in the fight to eradicate racism.

by Lauren O'Neil via blogTO
Posted by Arun Augustin at 12:08 PM