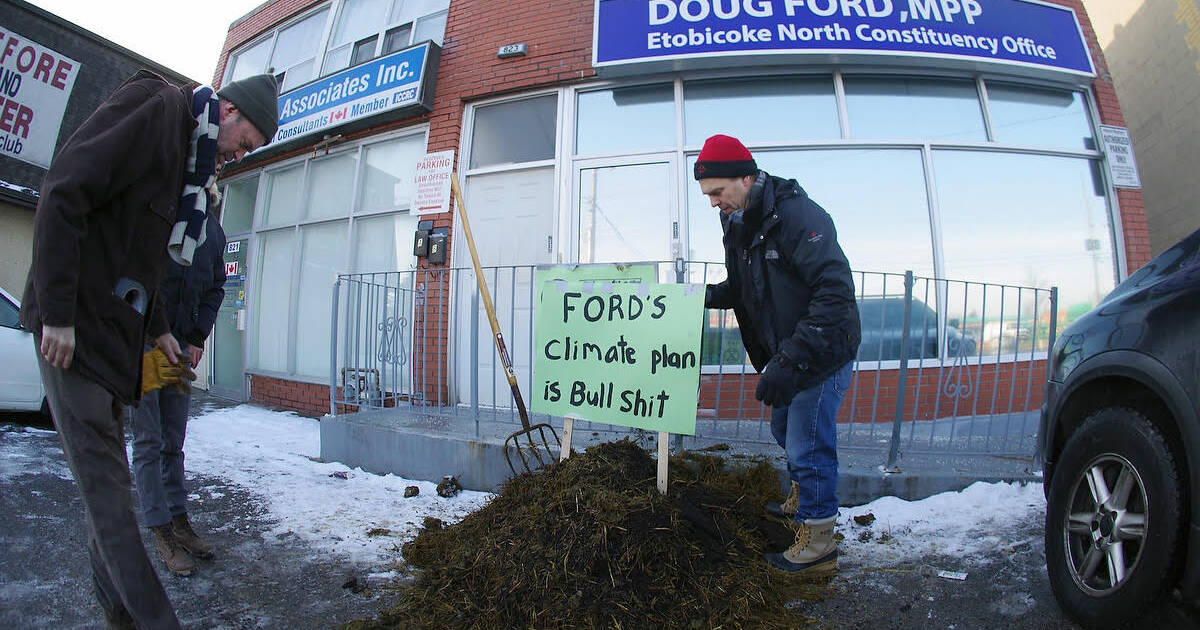 A prolific protest group that believes Ontario Premier Doug Ford's climate action plan is "total crap" got literal with their message this weekend by bringing cow feces to the politician's Toronto constituency office.

Extinction Rebellion (XR) pulled up to the Premier's office at 823 Albion Rd. in Etobicoke early Sunday morning with a truck-full of organic cow manure in tow.

Members of the group hovelled manure onto the doorstep of Ford's office while others gathered around with signs that read "climate change: 12 years to save earth" and "climate deniers are full of crap." 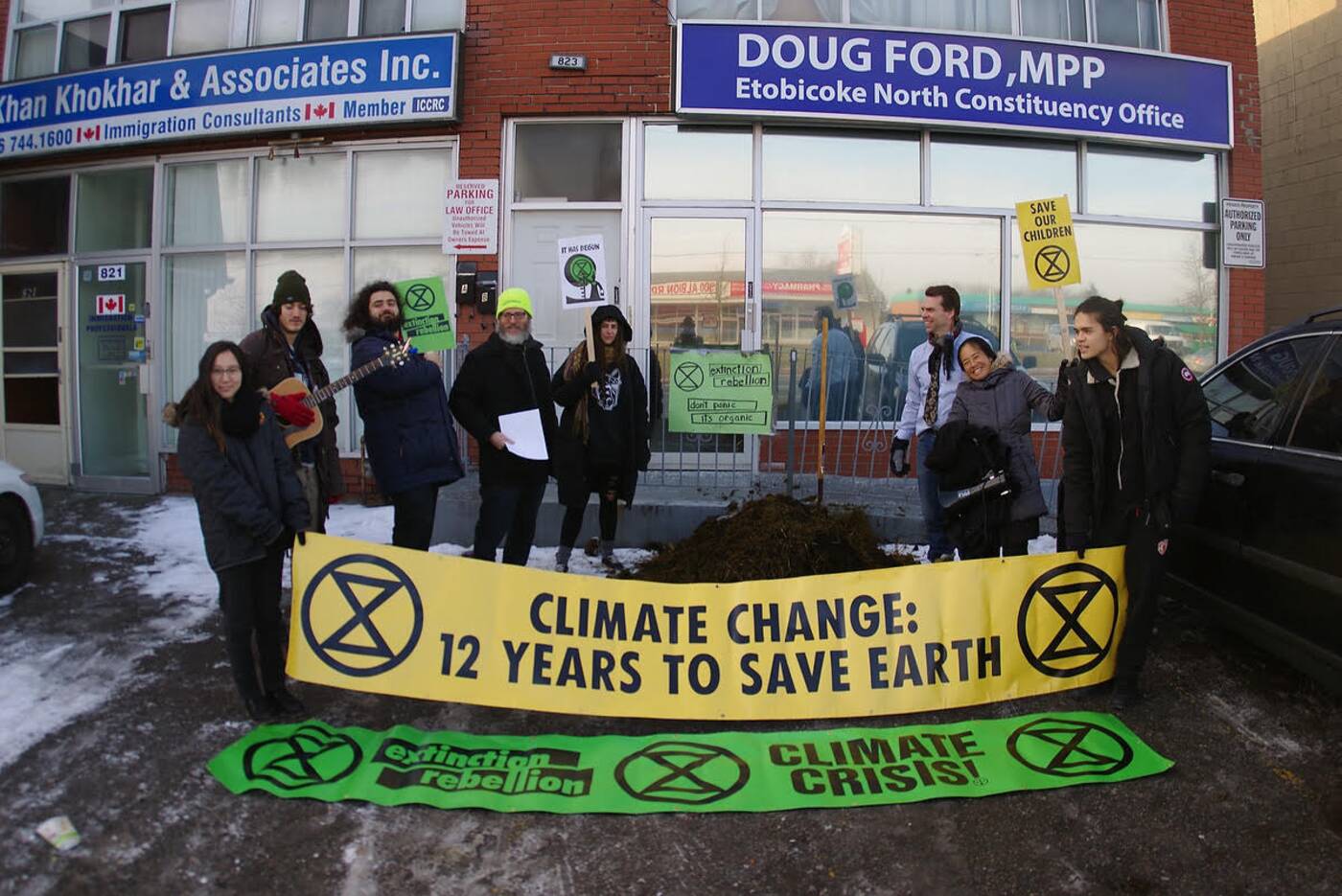 When the pile was complete, activists spiked it with a sign that declared "Ford's climate plan is bull shit." 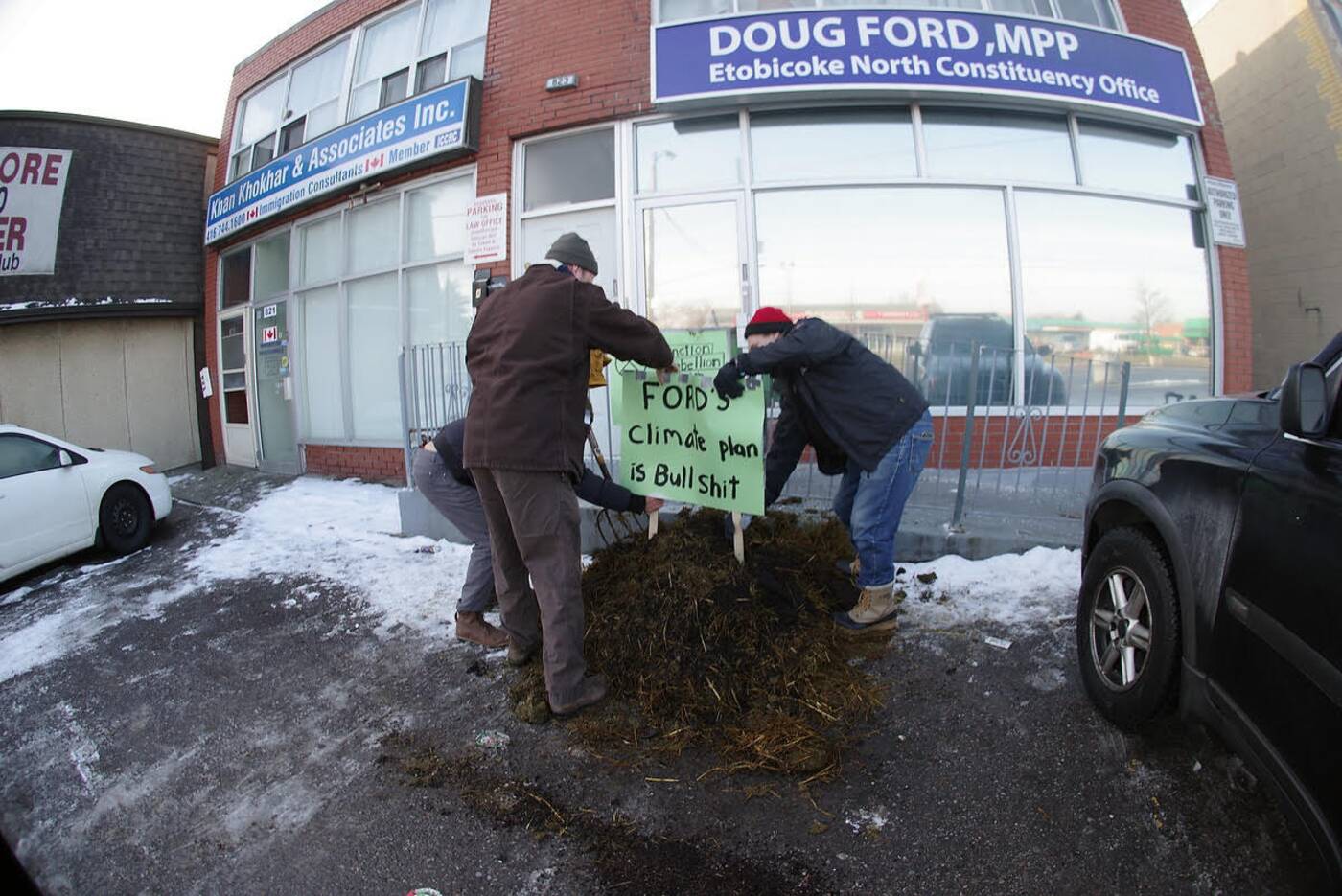 "We are here to deliver a message that the Ford Conservative government climate change plan is complete bullshit and total crap,” said Cameron Topp of XR Hamilton in a press release issued following the demonstration.

"The Ford Conservatives base their climate change strategy on lies and crackpot theories rather than scientific fact." 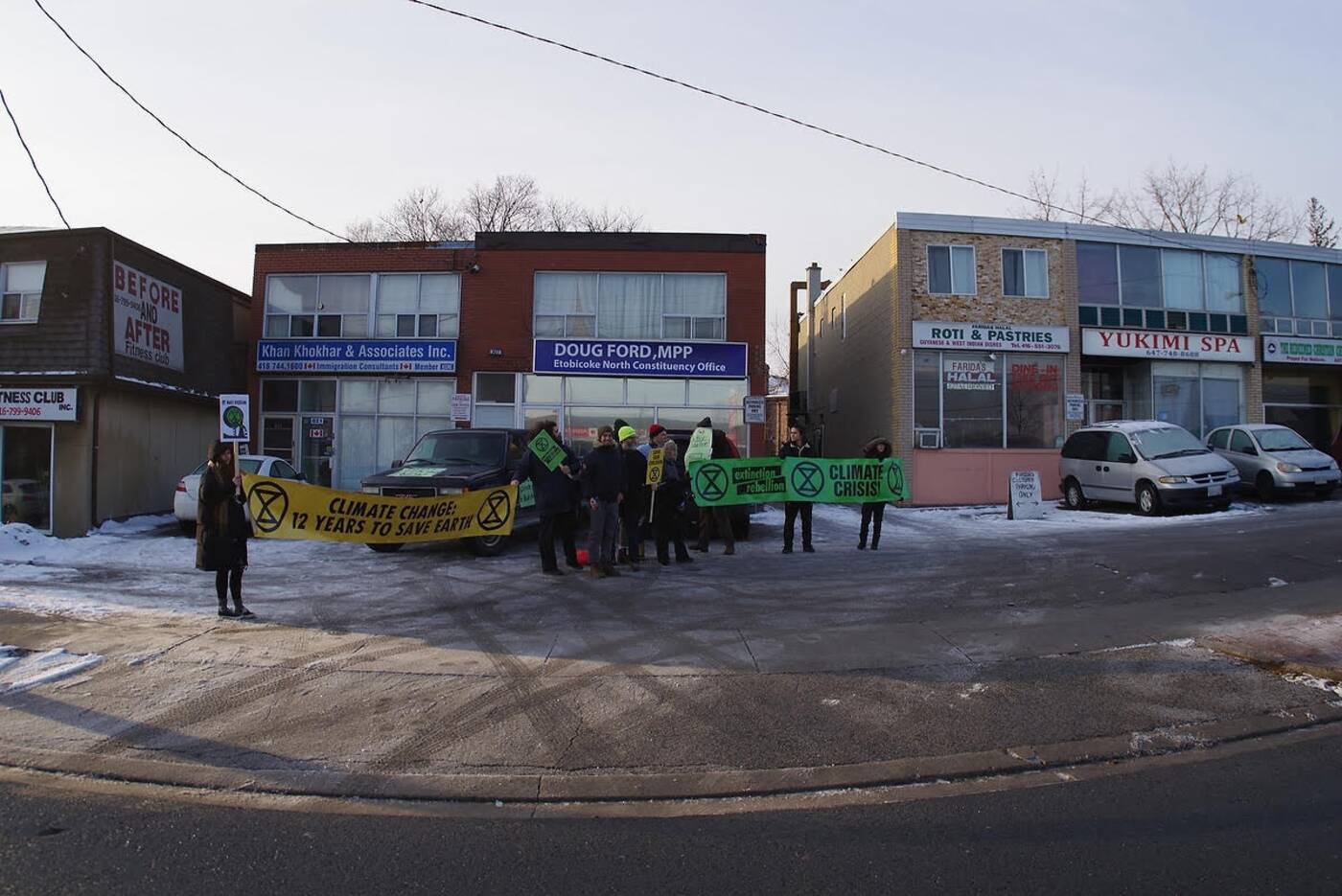 XR Hamilton, like XR Toronto, is a local branch of an international environmental movement that "uses non-violent civil disobedience in an attempt to halt mass extinction."

The group provided the following facts to support their claim that Ontario isn't doing enough to combat the global climate crisis: 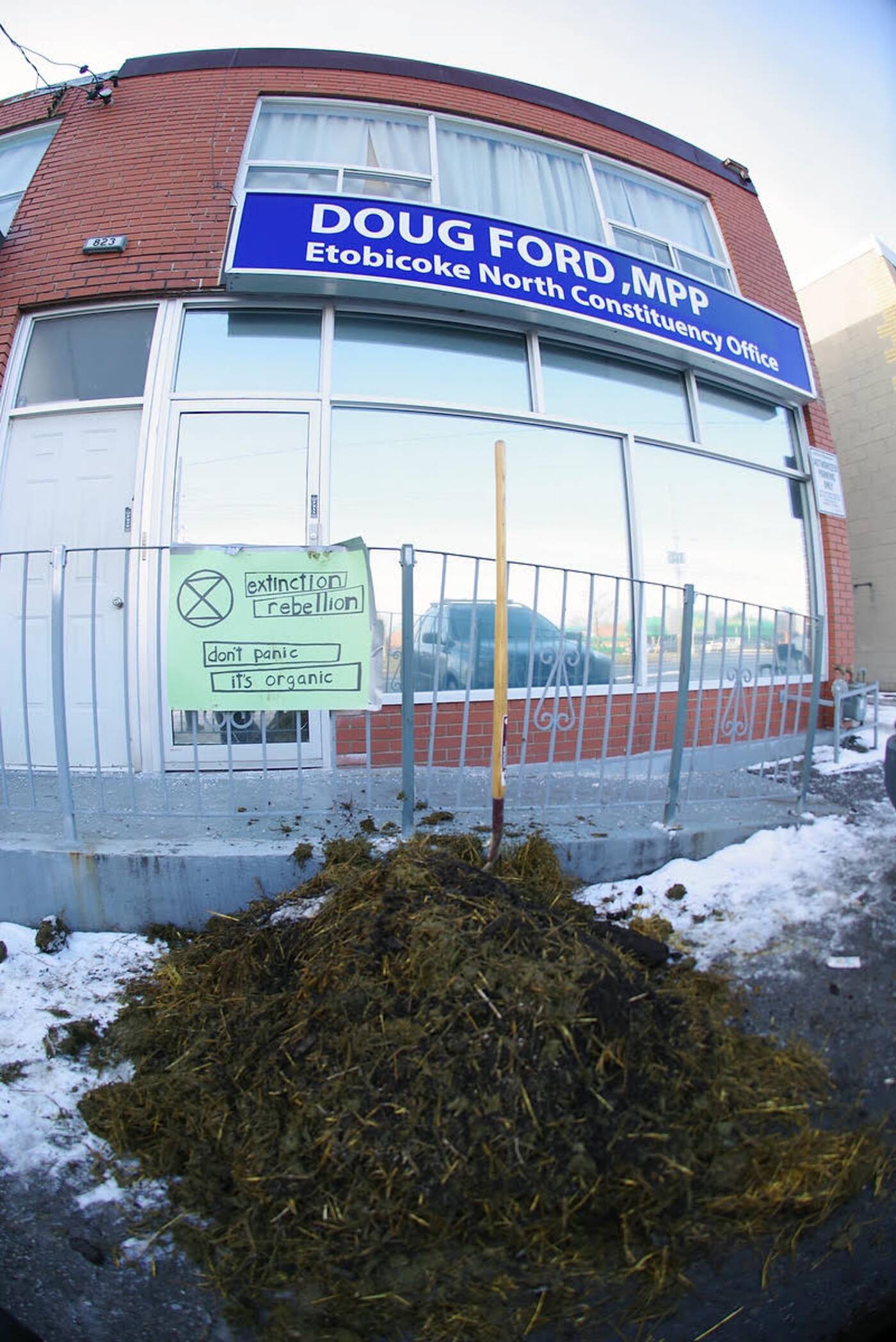 XR Toronto is calling upon Ford and the provincial government to start "boldly leading the world in necessary climate emergency action."

"Lack  of  large scale government action is threatening all families and we will no longer object politely" says Topp.

"The worst  lie  is that individual consumer choices would ever be enough to make the system-wide changes that are necessary." 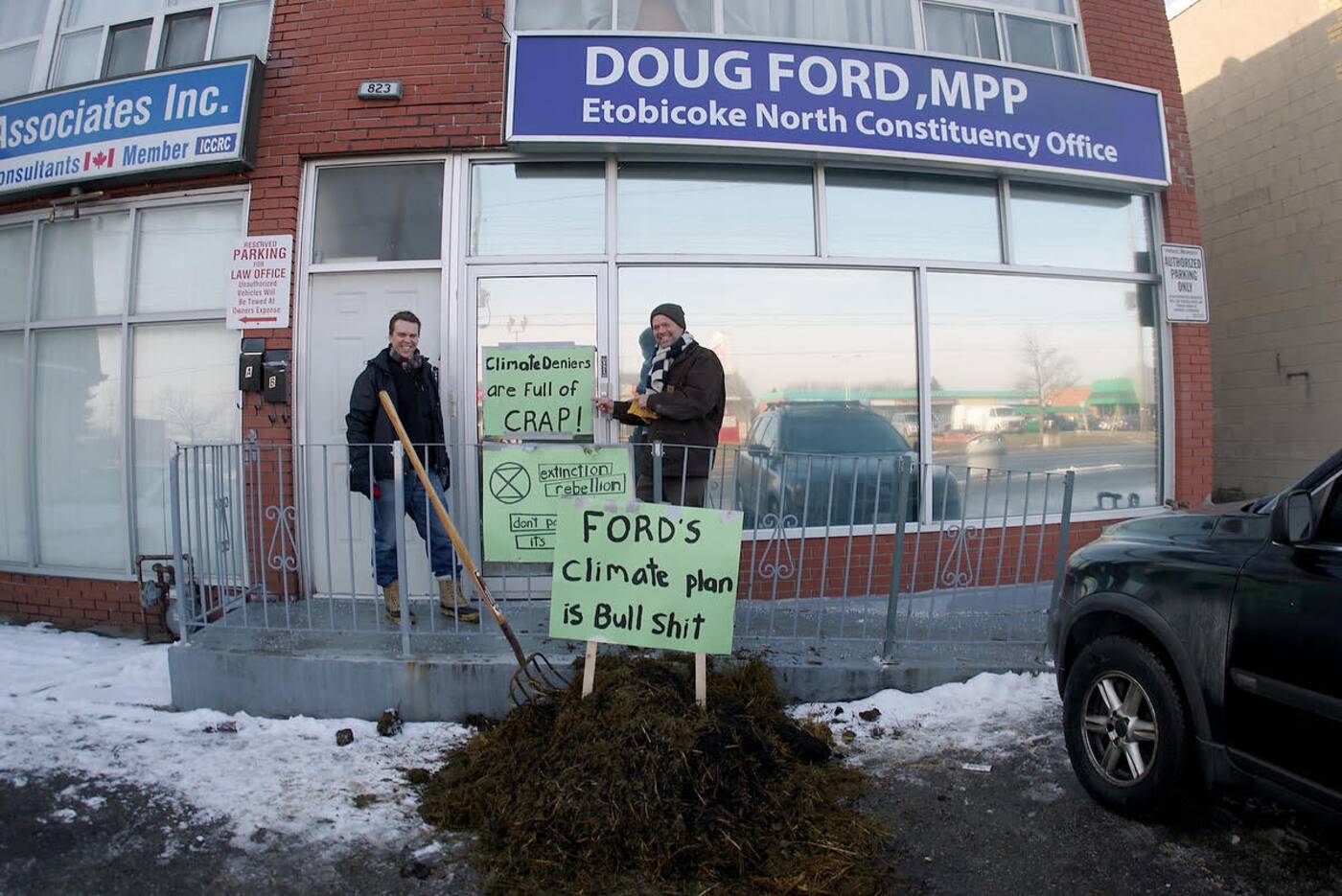 Premier Ford will not personally address the manure incident, according to a representative from his administration.

The Office of the Premier of Ontario wrote in a statement Sunday morning that Ford would not respond to the incident.

"If a response is what they're looking for, they won't get one from Premier Doug Ford," said Premier's Office spokesperson Ivana Yelich in a statement on Sunday.

"We wish them a Merry Christmas, Happy Holidays and hope they have a more productive and joyous time with their families."

by Lauren O'Neil via blogTO
Posted by Arun Augustin at 7:59 AM