10 organizations that shaped Toronto over the last decade 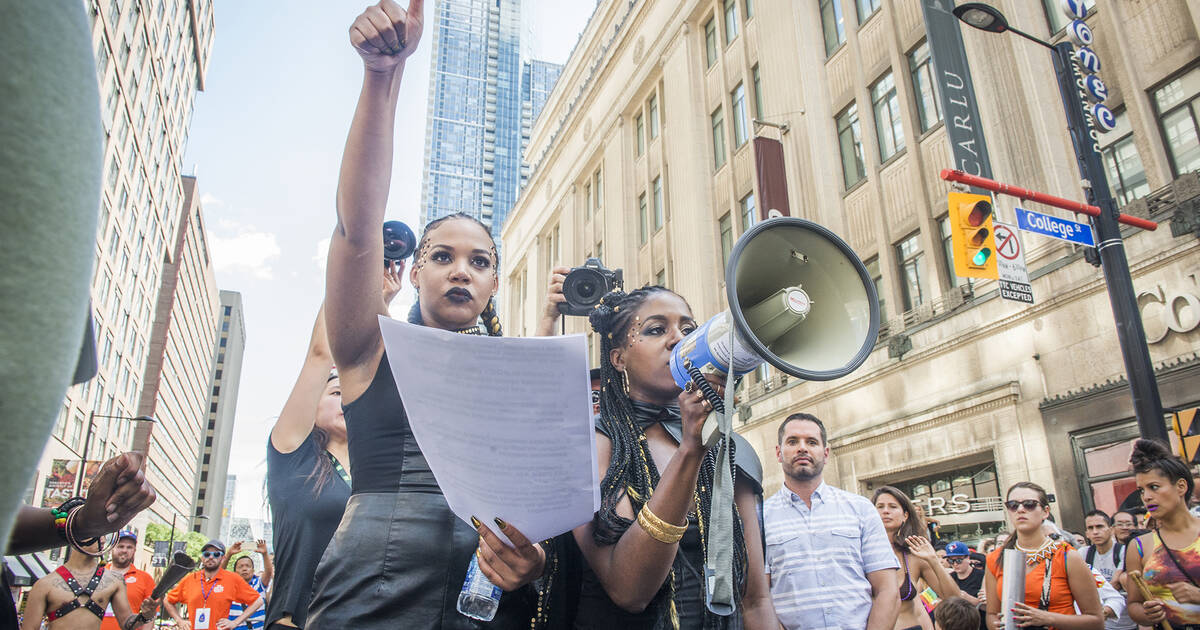 Toronto organizations are the collectives shaping the city, applying pressure to the powers that be, while offering resources and a sense of community to those who might need it most.

With so much important work being done in the city, it's impossible to acknowledge every group that's played a part in keeping Toronto liveable and socially engaged.

That being said, there are several that have stood out over the last 10 years with hallmark successes in their missions to affect change

Here are my picks for organizations that shaped Toronto over the last decade.

Snapshots of BLM-TO members bringing Pride Parade to a grinding halt in 2016 will go down as some of the most riveting and recognizable images from the last decade of Toronto politics.

It feels like yesterday that the Toronto chapter of this North American Black rights movement unapologetically delayed the city's annual parade, speakerphones in hand, for 30 whole minutes, with a sit-in and list of demands for Pride's executive director Mathieu Chantelois.

It felt like an awakening for the city and for Pride, and a battle temporarily won with the momentary banning of Toronto Police floats from the parade. The group continues to shape the landscape with their campaigns against police carding and calling out Justin Trudeau, among other fights.

There'd likely be no Toronto 'Music City' designation without the Remix Project, one-time homebase and school of artists like Drake, WondaGurl, and Jessie Reyez.

What started as a drop-in community program has grown into an award-winning, internationally-recognized incubator that has fostered some of the most talented musical acts in the city, mostly from racialized and underserved youth groups.

Remix's 20-year run saw a rebrand into the graduate program we know today in 2006, and culminated in their biggest accomplishment to date in 2019: the launch of a 5,000-square-foot home at Daniels Waterfront.

This grassroots animal rights group has been running in-your-face campaigns since the start of the decade, easily making it one of the most visible organizations in the city. Their visceral mandate has placed the group in news headlines more than once.

Among countless vigils held yearly, some well-publicized disruptions include crashing a Trudeau speech and picking on the Dundas West restaurant Antler.

Then of course there was the case in 2015, when founder Anita Krajnc was charged with criminal mischief (later dropped) for giving water to pigs on their way to the slaughterhouse.

Opioid overdoses in Toronto reached an unprecedented high in 2017. Tackling the issue head-on were organizers of Toronto OPS, who decided to open an unsanctioned supervised injection facility in Moss Park that summer.

Supervising thousands of injections out of community-funded, volunteer-run tents, OPS members defied the law and put themselves at the risk of being arrested for months.

Their fight for funding and legitimacy was finally awarded after numerous site closures, and they've since moved to a physical space where they function officially, albeit in the face of de-funding by the Ford government and a still-growing number of overdose deaths.

Acting as the frontier for Toronto's most unique and vocal neighbourhood is FOKM—pronounced "fuck 'em", and not by accident—is an example of a resident-led movement that, when mobilized properly, can actually influence large-scale developments.

Major strides in the past few years include successfully shutting down a potential Walmart in 2014, acquiring a land trust, fighting for Kensington's heritage status, launching their No Ghost Hotels campaign, and fighting tooth and nail against businesses which they deem unfit for the Market, like it or not.

Toronto is far from the cycle-friendly city it could be, but it's as close as it's ever been thanks to this not-for-profit pushing for policy and infrastucture changes.

Advocating for bike lanes on Bloor Street, Danforth, and chunks of Yonge, the group has been the driving force behind some important and long-awaited additions to our city streets, and it continues to push for protected bike lanes, including on Eglinton when the LRT construction is done.

Since launching in 2010, this registered charity dedicated to providing employment to people with development disabilities, mostly on the Autism spectrum, has grown from two couriers to around 40.

The not-for-profit courier service has set itself apart from other similar organizations by relying solely on the TTC, bringing visibility to disability employment with a recognizable laurel logo, and rates that go directly to its employees.

Sitting at the helm of climate emergency awareness in Toronto is TEA, City's Hall's environmental watchdog since 1988.

Over the last decade, the group has been instrumental in educating the public and campaigning for council and big-box stores in Toronto to ban single-use plastics for good.

The last year has seen a significant shift away from plastic on a provincial and national scale, and that's largely thanks to the citywide work of groups like TEA putting the pressure on at City Hall .

Led by Indigenous women, the Toronto chapter of this nation-wide movement that began in 2012 is an active group that continues to  spread the word about Indigenous sovereignty along with land and water protection.

Starting with the Via Rail blockade in solidarity with Chief Theresa Spence's hunger strike, Idle No More Toronto's work is ongoing. Far from the movement's birthplace of Saskatchewan as we may be, Toronto is still a part of the Canada-wide fight for First Nations rights.

by Tanya Mok via blogTO
Posted by Arun Augustin at 7:08 PM