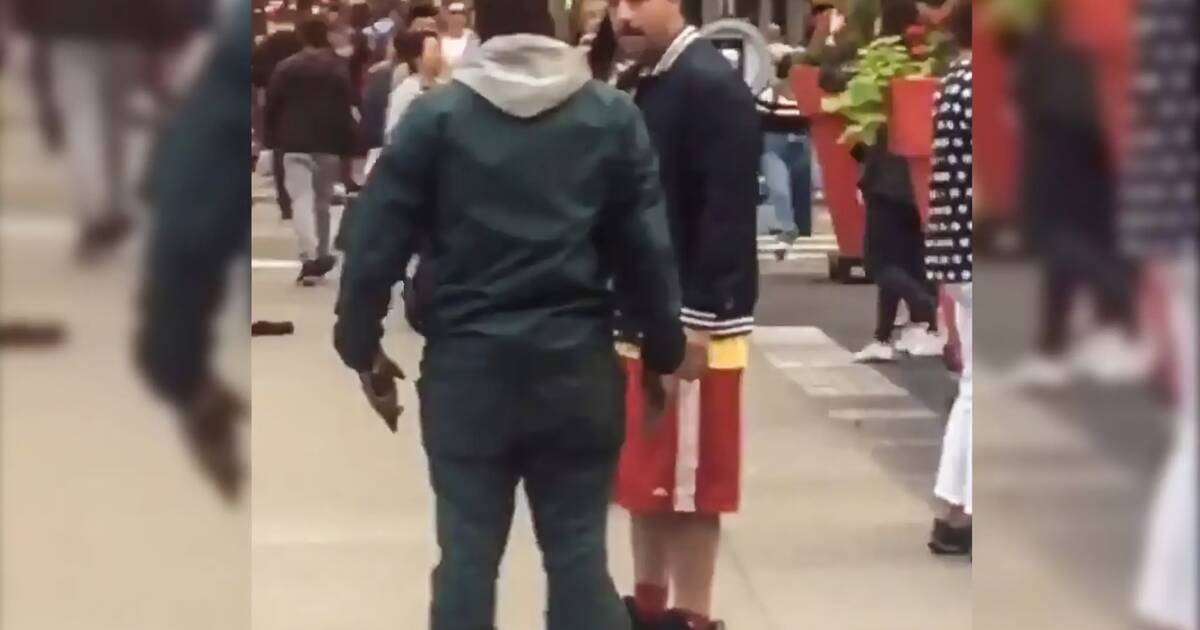 Whether you'll savour the memories of 2019 for the rest of your life, or you're ready for this hellish year to be over, it's hard to deny how much premium content the people of Toronto have given the internet over the past 12 months.

From fierce brawls and TTC scream-offs to weird happenings around the Eaton Centre—I'm not about talking glossy music videos or produced campaigns, but wild moments captured on the streets of the 6ix by people like you and me.

Here are my picks for this year's best viral videos out of Toronto.

Adam Sandler gets reamed out in Yonge-Dundas Square

Hollywood funnyman Adam Sandler experienced first hand the kind of characters who frequent downtown Toronto's most-popular tourist hangout when a man inexplicably started screaming at him outside the Eaton Centre. It's not know why the man freaked, but it might have had something to do with the actor's sleazecore ensemble.

Why is Adam Sandler in Toronto and why is he getting screamed at pic.twitter.com/pt0fkZn7BJ

Toronto woman stands up against vaping teen on the TTC

Canada's answer to the "cash me outside" chick from Dr. Phil (now known as the rapper Bhad Bhabie) made her viral web debut while threatening to beat someone up on a TTC streetcar. The person she threatened made a hero of herself by sticking up for an older woman who'd simply asked the teen to stop vaping.

Viral video shows tense altercation between woman and teen who is alleged to have been vaping on the TTC. https://t.co/vyGFeyjqXq pic.twitter.com/3NkCjmiItu

Fight breaks out between driver and cyclist at busy intersection

I could fill a whole new listicle with all of the road rage videos that were floating around Toronto this year, but July footage of an alleged bike courier slamming an angry motorist to the ground while other drivers attempt to manouvre around them is perhaps the most representative of Toronto's tense street situation right now.

A dispute got ugly between a cyclist and a driver on the streets of #Toronto - 📹 u/Doublecheese76 https://t.co/6h9IDZxeFL pic.twitter.com/8aThTK7bbZ

Speaking of drama between Toronto road users, the security system of a midtown home caught someone literally jumping onto someone else's car after a driver nearly rammed into a stroller that may or may not have contained a child. The jury's still out on that one.

A woman almost got her stroller run over by a car in the middle of a Toronto street https://t.co/kH1IQQuTbz pic.twitter.com/1c7yV56iEg

Two young men got Toronto Twitter howling by filming their chance interaction with DoFo in a gas station parking lot. The students grilled a jolly-looking Ford on his government's sweeping cuts to OSAP before calling him a "waste yute" and a "goof."

Somalis in Toronto catch Ontario Premier Doug Ford at a Gas Station and ask him the hard hitting questions the streets needed to know pic.twitter.com/Cm5imwIXG1

Members of a far-right political protest group in makeshift combat gear clashed with activists during Toronto Pride in June. Clips from the resulting 18-minute-long YouTube video of roughly a dozen people punching, kicking and grabbing each other inspired many a head shake.

A vicious brawl broke out between members of far-right political groups and counter-protesters at the Eaton Centre during Pride celebrations in #Toronto this weekend.

It wouldn't be a blogTO year-end video roundup without an appearance by everyone's favourite mischevious fuzzballs. A whole familiy of the most obese raccoons you've ever seen gave the entire city a chuckle in December by obstinantly refusing to leave someone's porch in a great Gates Wildlife Control YouTube video.

Police take down man with knife inside Toronto library

Footage from a dramatic altercation between Toronto police and a knife-weilding man inside the Toronto Reference Library made the rounds in early April. Nobody was hurt during the incident, but the unidentifed man was tased by cops after resisting arrest and screaming at them to "shoot" him while hundreds looked on.

Lady sings karaoke while paramedics load ambulance behind her

Millions were amused by a truly bizarre TikTok clip of a young woman singing Mariah Carey's "We Belong Together" outside the Eaton Centre in Toronto while paramedics loaded someone into an ambulance behind her. "What the f*ck goes on in Toronto?" wrote the original uploader. Toronto just shrugged.

I'd be remiss not to mention what was actually the most-talked about viral video of 2019 (save for all things Raptors). Yes, the woman who became known as "Chair Girl" for tossing a chair from the balcony of a high-rise over Toronto's Gardiner expressway in February captured much attention... and potentially a six-month jail sentence.

by Lauren O'Neil via blogTO
Posted by Arun Augustin at 3:03 PM