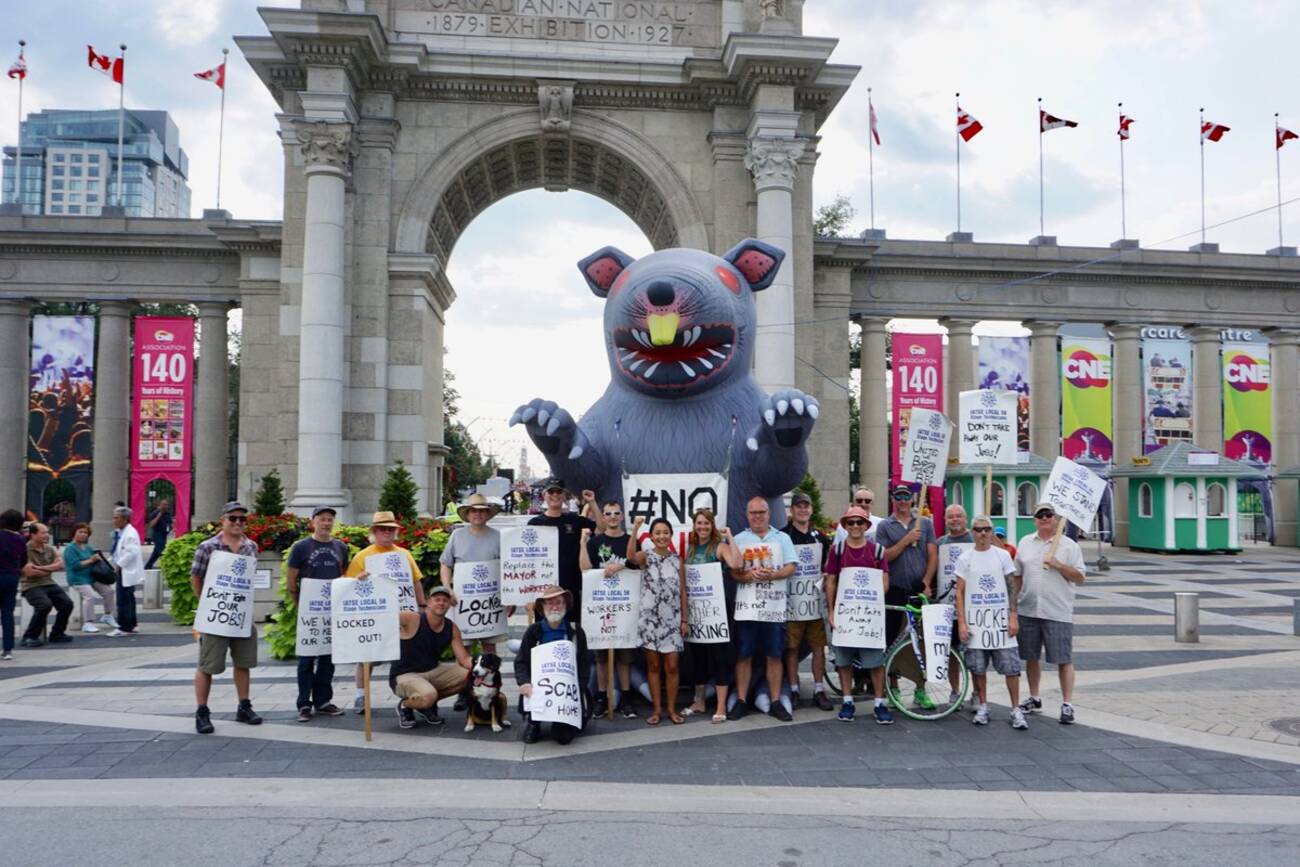 The relatively new-to-Canada ride hailing service Lyft has graciously offered to discount the bill for anyone and everyone to attend the beleaguered CNE this week on Wednesday and Thursday between 10 a.m. and 1 p.m.

It's as easy as showing up to Exhibition Place and walking in for free — or rather, it would be if not for the picket lines.

Nice picture...so how long did it take you to edit out the @iatse58 picket line? You know, the one that's there EVERY DAY since @ExPlaceTO #58lockedout 400 workers since before the #CNE started? No money for @lyft when there's no job, sorry.

Members of the International Alliance of Theatrical Stage Employees (IATSE) Local 58, which represents skilled technical workers, have been picketing outside the city-owned Exhibition Place for over a month now after being locked by the venue's Board of Governors on July 19.

The widely-publicized labour dispute has yet to be resolved as the CNE comes close to an end for 2018, and poor attendance is costing The Canadian National Exhibition Association (CNEA) millions.

Another good write-up about why it's important to respect #58lockedout this year. I love the CNE but I love labour rights more. https://t.co/mvRKNaWYDT

"As we have repeatedly warned the Mayor, the Board of Governors of Exhibition Place and City Councillors, this lockout is having a significant negative impact on both attendance and revenues at the 2018 CNE," reads a letter to Mayor John Tory from the CNEA published last Tuesday.

"Despite overwhelmingly positive feedback from visitors over our initial few days, we regret to report that our projected losses to-date are in the range of $1.5 million."

Lyft to the rescue? Not quite.

Is it worth crossing the @iatse58 picket line for free entry into @ExPlaceTO ? Myself and 400+ other families don't think so.. #58lockedout

Some might see the ride hailing app's free entry promotion as a nice gesture, but others see it as an incentive to help the public cross IATSE 58's picket lines.

It's all a bit too rich for those familiar with Lyft's recent socially- and politically-conscious branding efforts.

"Lyft has recently pitched itself as a more ethical alternative to rival Uber, which was accused of interfering in a labour dispute last year as it continued to service JFK airport during a taxi strike," explains Motherboard's Jordan Pearson.

"Lyft co-founder John Zimmer seized on this and other bad press for Uber and described his ride-sharing company as being 'woke.'"

Torontonians in support of the union's position are both blasting and making fun of Lyft on Twitter right now for entering the fray at all.

"Company deeply invested in the Precarity Economy teams up with CNE to subsidize picket-crossing," wrote one local.

"You could lyft our spirits even more by not crossing the @iatse58 picket lines," wrote someone else.

by Lauren O'Neil via blogTO
Posted by Arun Augustin at 1:08 PM