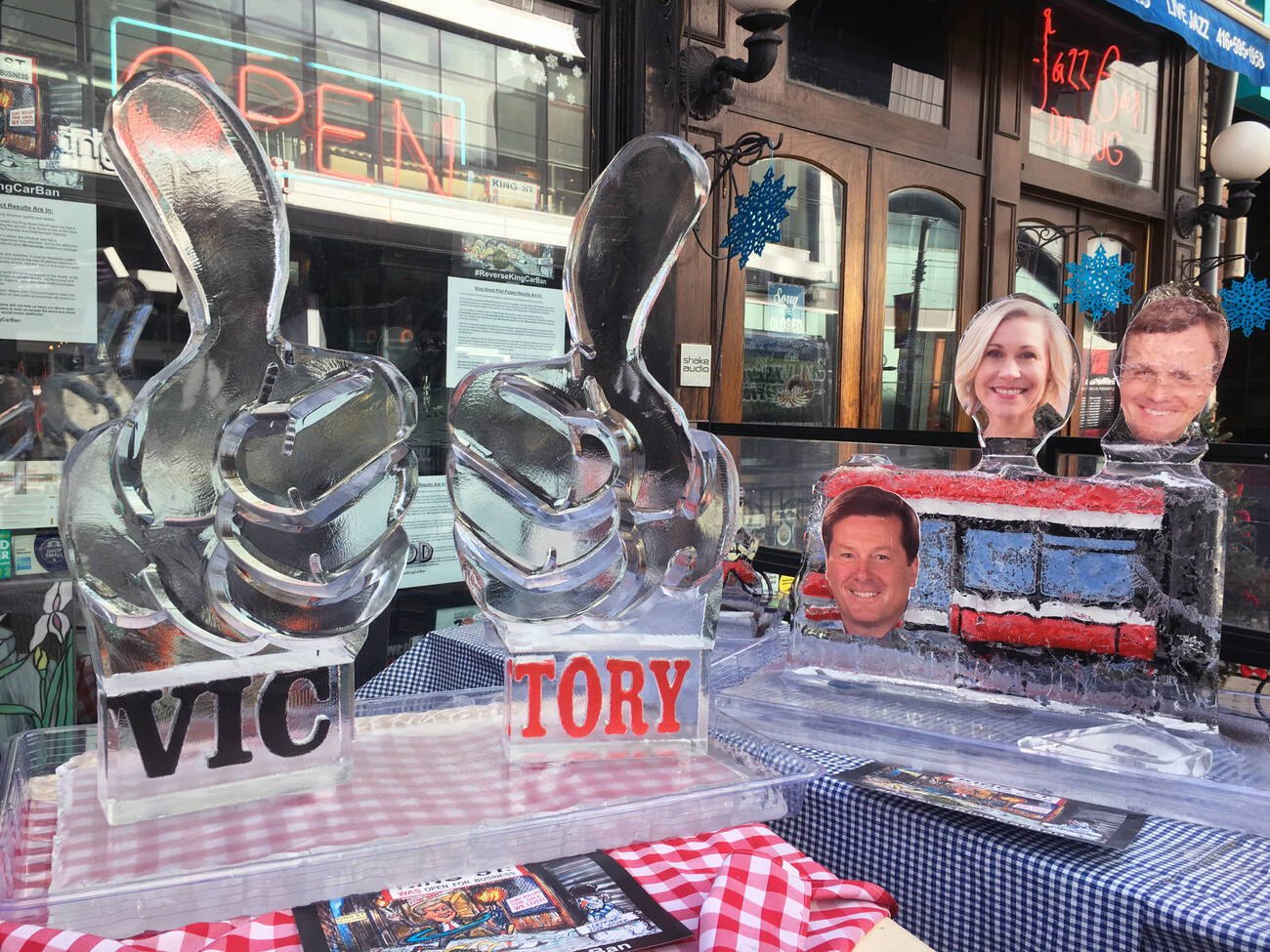 If there's one business benefiting from the King Street kerfuffle of 2018, it's got to be Ice Boy.

The Scarborough-based decorative ice firm has delivered roughly 10 different sculptures to restaurants along King over the past week or so, according to sculptor Danny Marchiori – at least four of them to the embattled Kit Kat restaurant.

Two of those sculptures arrived last night, replacing the contentious (and fast-melting) middle finger sculpture in front of Kit Kat with two more icy hands, both brandishing thumbs with the word "VICTORY" spelled out across their bases. 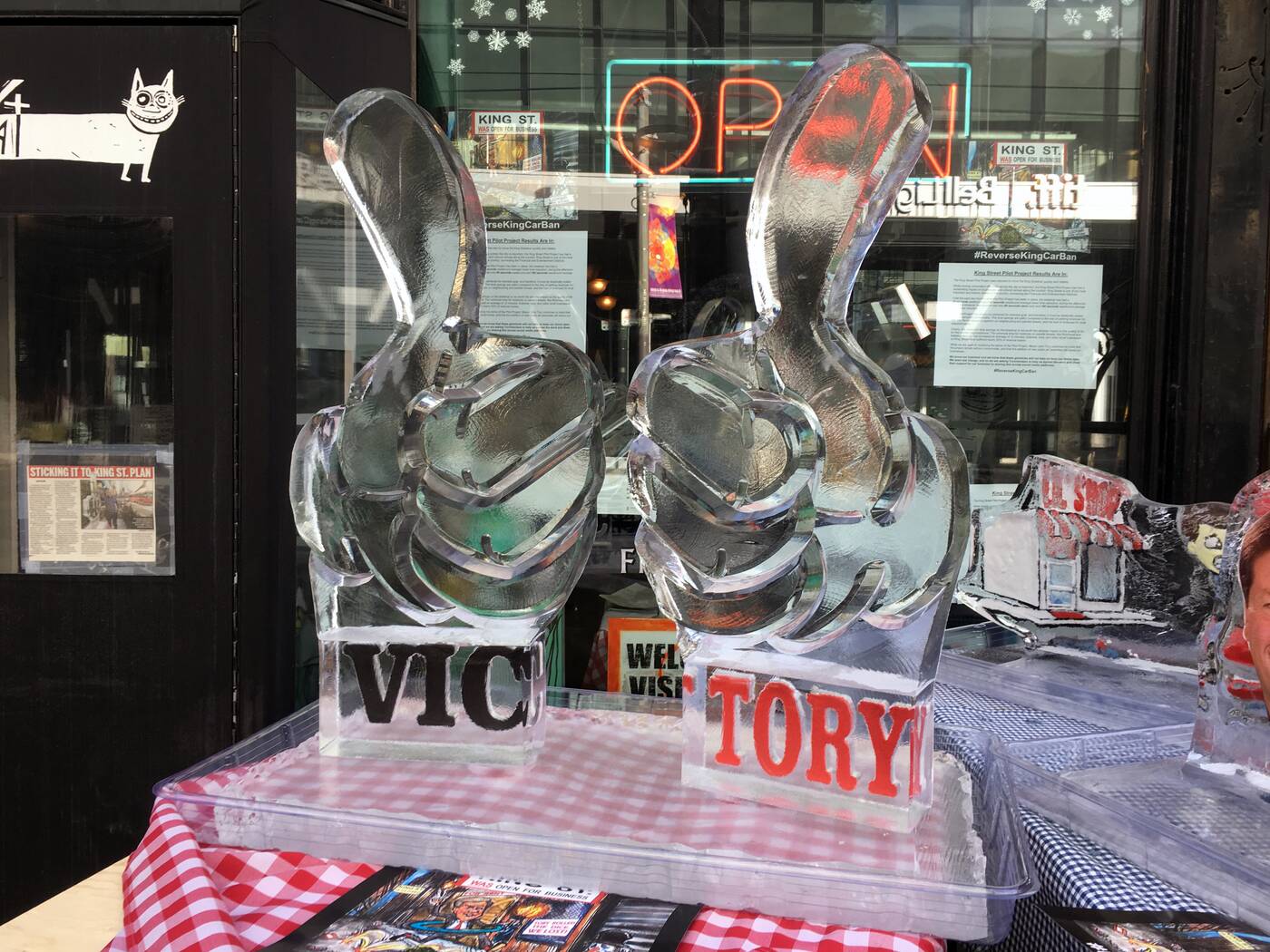 "Well, we proved our point," says owner Al Carbone. "City Hall isn’t listening and everybody knows that now. It was a good investment."

Earlier this week, Carbone held a press conference outside his restaurant to announce the launch of social media campaign against the King Street pilot project.

"We'd like the mayor to reverse it immediately. It's hurting too many businesses all at once," said Carbone of the pilot project, which restricts car traffic and eliminates parking on King between Bathurst and Jarvis.

Looking forward to an announcement by King Street business owners and their employees at 10 AM tomorrow at Kit Kat. #ReverseKingCarBan pic.twitter.com/NkKFcUUcep

Carbone and his supporters (which include city councillor Giorgio Mammoliti and mayoral hopeful Doug Ford) have been using the hashtag #ReverseKingCarBan to decry the pilot on Twitter all week.

Others, specifically transit riders who love their smoother, faster commutes along King Street, have been using it similarly to defend the project.

Internet drama aside, it's hard to deny that the ice sculptures have made an impact.

Two smaller sculptures still sit outside Kit Kat alongside Carbone's new thumbs up gestures – one of them representing a small business, the other one showing the heads of Mayor John Tory, former city planner Jennifer Keesmat and city councillor Joe Cressy riding a streetcar. 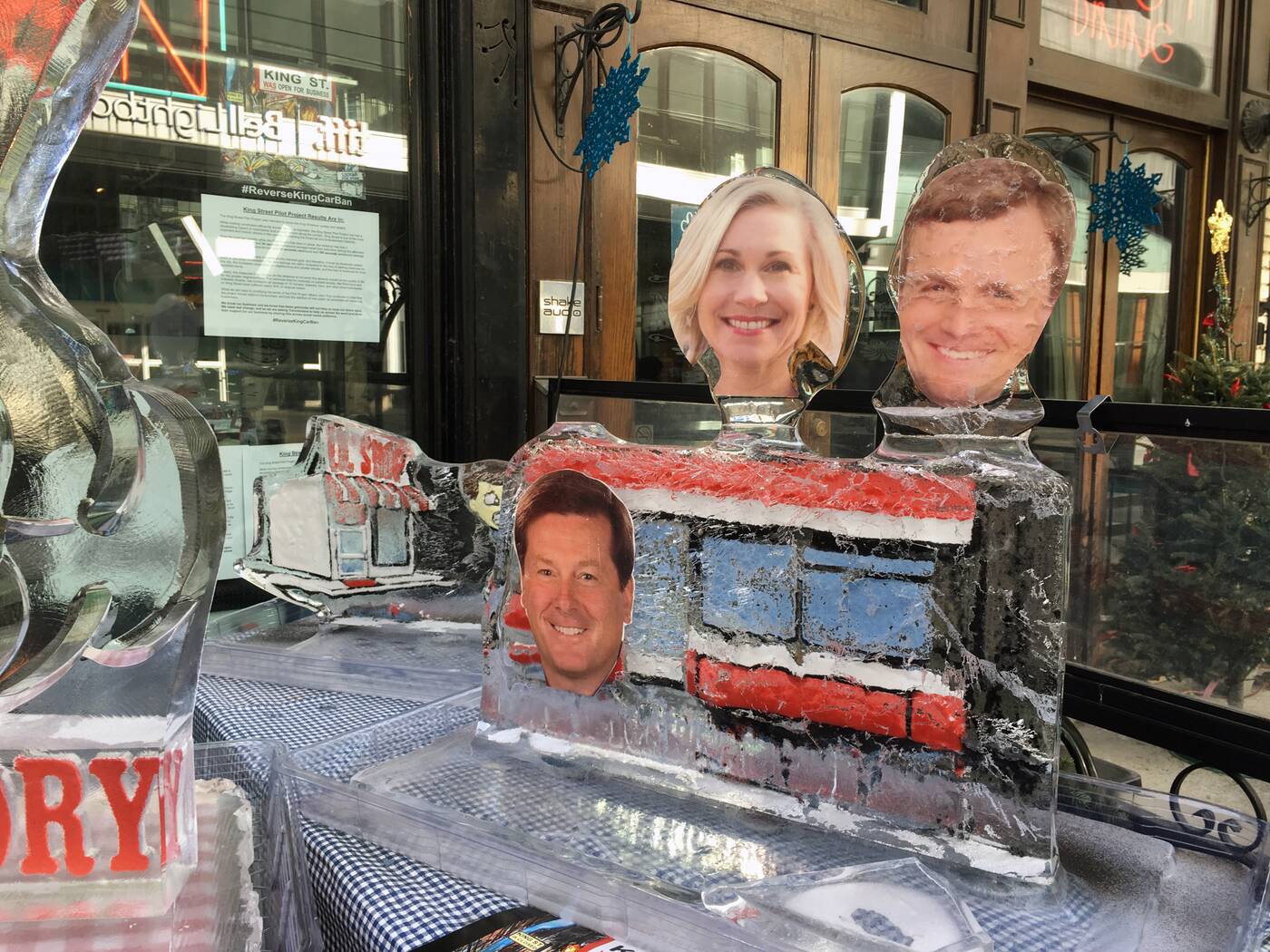 Actually, Tory's head seems to be driving the streetcar now that things are melting a little bit.

All the middle fingers on King are gone now, but dozens of news stories in local and national media outlets will live on forever – not to mention the hundreds, if not thousands of tweets and Facebook posts.

Carbone hopes that all of the press and attention will eventually work out in his favour, saving his nearly 30-year-old business along with other restaurants in the area.

"I hope we can get some action from city hall," he said today by phone. "Ya know?"

by Lauren O'Neil via blogTO
Posted by Arun Augustin at 6:12 PM