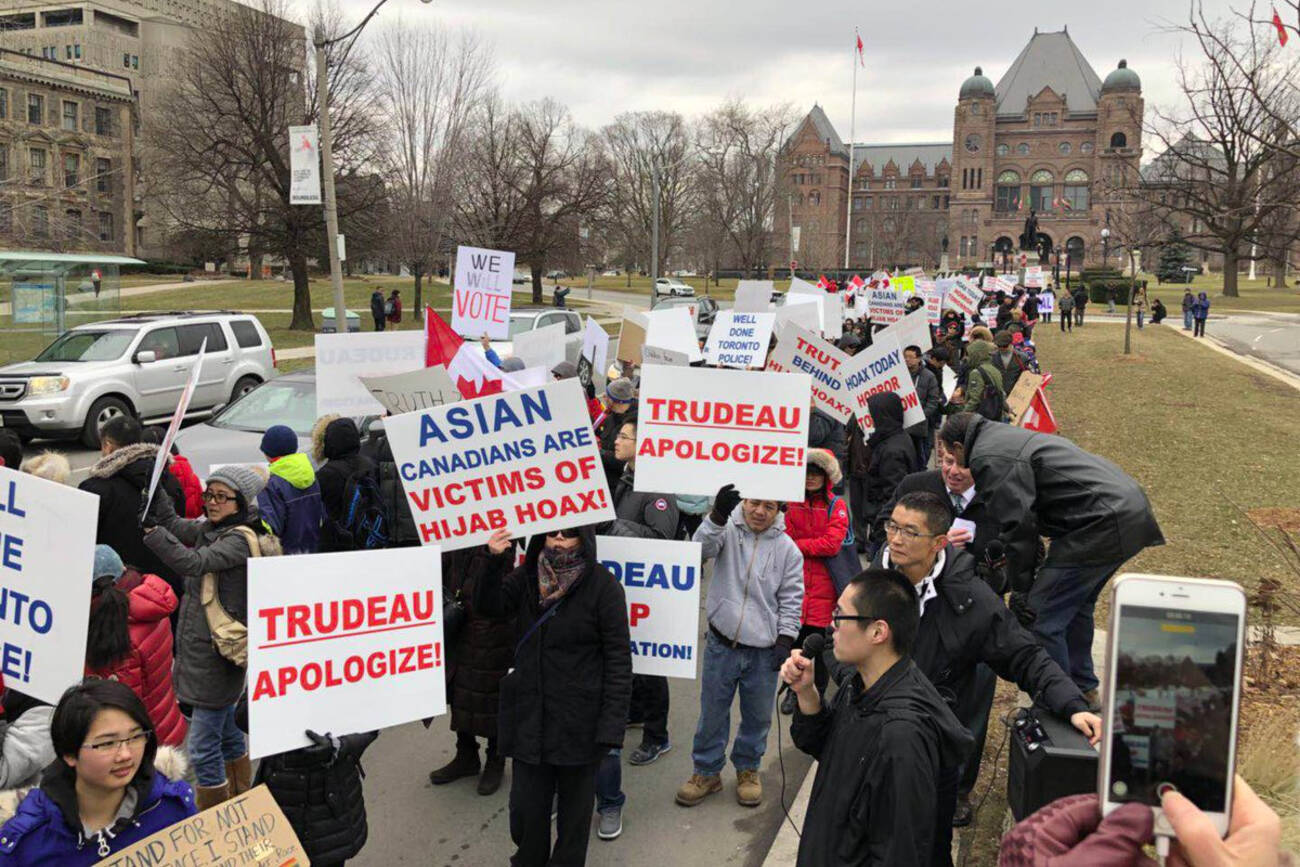 Dozens of Asian Canadians took to the streets of Toronto on Sunday with signs and chants calling on Prime Minister Justin Trudeau to apologize for how he handled what's been dubbed the "hijab hoax."

Video6: #Asian #Canadians Protest in #Toronto and asked for Truth behind #HijabHoax? @JustinTrudeau and @CBCNews, do you know how to count the number of people in this #protest? @TorontoStar pic.twitter.com/Nd6sEKtwY6

The group was protesting how all three levels of government reacted to the story of an 11-year-old girl in Scarborough having her hijab cut with scissors by a stranger, who was reported to be an Asian man.

CANADIANS are EQUAL #HIJABHOAX divides CANADIANS
That's all, a simple but effective message! 🇨🇦👍#TrudeauMustGo2018 #cdnpoli (not my photo) pic.twitter.com/FJGoPjRE5g

Participants from yesterday's protest say that Trudeau failed to stand up for Asian Canadians in his response to the attack (and news that it didn't happen), and that he owes the community an apology.

The group is also targeting Wynne, Tory and the Canadian Broadcasting Corporation.

Asian Canadian protest #HijabHoax in #Montreal Today. This is the second wave of protest #manufacturedhate since last weekend across Canada. The news has never been covered by @CBCNews pic.twitter.com/nZc7QoMFD9

"We stand as one!" shouted one of the protest's leaders into a megaphone on Sunday. "We will not let our country's leader react only according to their political agenda!"

The group, which walked from Queen's Park to Yonge-Dundas Square, carried signs that read "Asian Canadians are victims of hijab hoax," "All Canadians are equal," "Truth behind hijab hoax?" and "Trudeau apologize."

One protester told the Toronto Sun that he condemns Trudeau for not defending Asian Canadians when the Muslim girl's report was found to be false.

"The day after this (hoax) happened, there was a 15-year-old boy shot in Vancouver and the Prime Minister didn't say anything about that. I don't understand," said protester Bob Peng.

"(Trudeau's) behaviour has hurt everyone, not just Asians. By not apologizing, it just stirs up racial tensions and hate between communities."

by Lauren O'Neil via blogTO
Posted by Arun Augustin at 9:10 AM