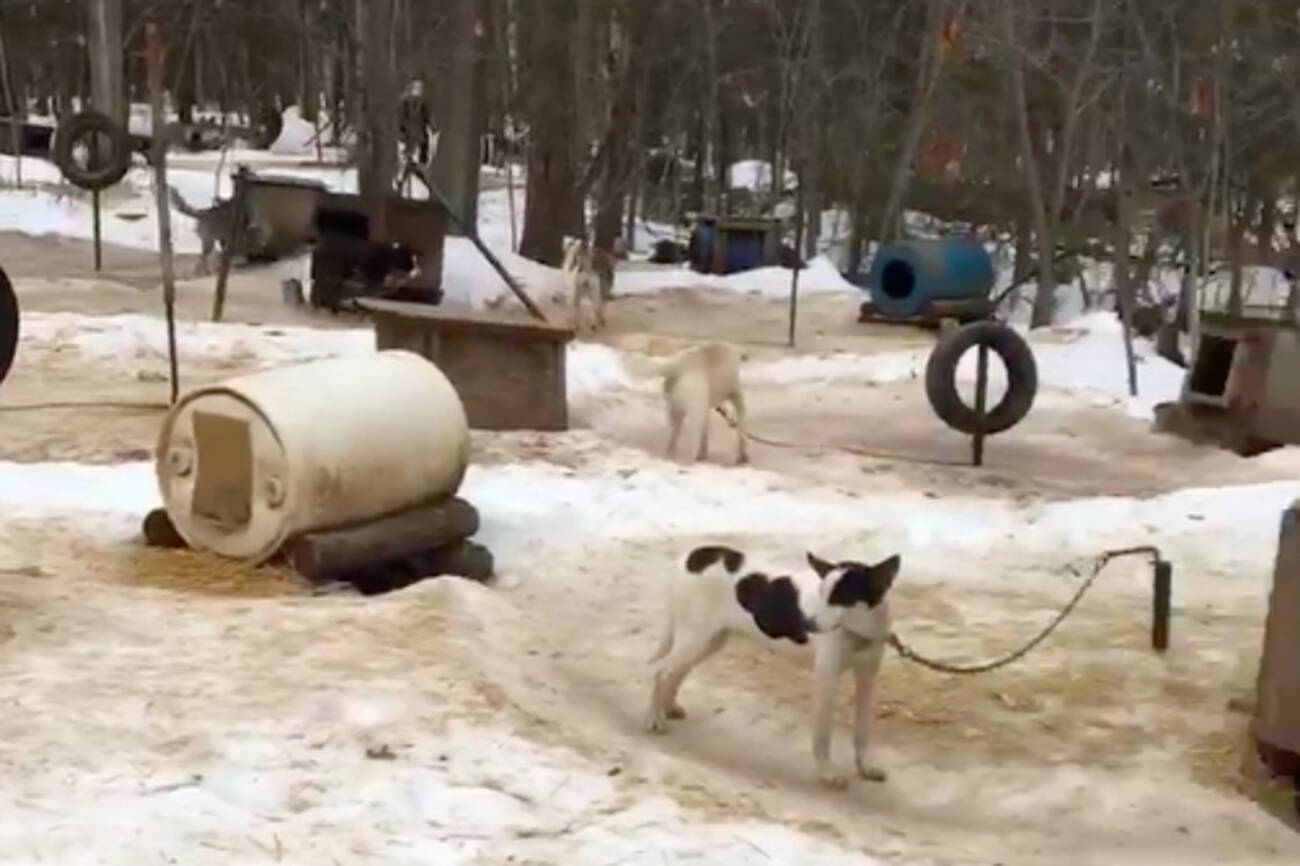 The OSPCA is investigating reports of serious animal cruelty involving more than 100 dogs at a sledding company near Toronto thanks to two viral Facebook posts.

Dylan Blake and Natasha Guerriero say they were booked for a dog sledding trip on Sunday through Toronto Adventures, an outdoor recreation experience provider.

When the couple arrived in Moonstone, Ont. for the outing, they were horrified by the "cruel and sickening environment" at Windrift Kennel, which had been subcontracted for the event.

Both Blake and Guerriero, provided details accounts of what they saw (along with videos) on their respective Facebook accounts.

The clip above, which shows an injured dog struggling to get attention, was posted to both accounts. It has now been viewed nearly 5 million times in just 24 hours.

"The dogs were extremely scared when walking up to them and some of them were sick, starving, and injured," wrote Blake in his post with the videos.

"It was shocking. When petting the dogs they were so not used to affection and they would not want me or my girlfriend to leave them because of the lack of attention they get."

"This is mass cruelty toward harmless and innocent animals," he wrote. "This place needs to get shut down."

You'd be hard-pressed to find many out of the more than 12,000 commenters on Blake's post who disagree.

Both Blake and Guerriero said they were told that, when the dogs aren't working, they are chained to a post where they both sleep and go to the bathroom.

"One of the people working there told us not to get too close because they don't get washed very often," said Guerriero. "You could definitely tell petting just one because we were full with dirt from their coat and sh*t from their paws."

With literally millions of views on their videos, the couple is bringing quite a bit of exposure to Windrift and Toronto Adventures right now.

The former has taken down its Facebook page and has not yet responded to a request for comment on the allegations.

The latter on its website today that, while Toronto Adventures has "used the services of Windrift Kennels for dog sledding," they "take pride in ensuring that no animals are ever mistreated."

"We review all dog sledding companies we hire for our events to guarantee that they are certified & regularly inspected by the appropriate Ontario government enforcement offices," reads the message. "We will be requesting an additional inspection of Windrift Kennels."

We have requested an additional inspection of Windrift Adventures to assure that their dogs are healthy and being treated appropriately. Toronto Adventures will only work with companies that meet and/or exceed professional industry standards regarding the treatment of animals.

Many of those commenting on the Facebook videos have vowed to contact the OSPCA or police (though Guerriero says she already did this before posting the video.)

Their efforts could very well pay off for any animal who may be in trouble at Windrift Kennels or elsewhere on the local dog sledding circuit.

OSPCA spokesperson Melissa Kosowan confirmed by email today that the agency is aware of the situation and that an investigation is ongoing.

"Concerns relating to a dog sled operation in Central Ontario have been reported to the Ontario SPCA and we are following up accordingly," said Kosowan.‎"As this is an ongoing investigation, the details we can provide are limited in order to maintain the integrity of the investigation."

"The Society takes all reported concerns of animal cruelty seriously," she said. "We want to assure the public that the protection and care of the dogs is our top priority."

by Lauren O'Neil via blogTO
Posted by Arun Augustin at 5:45 PM