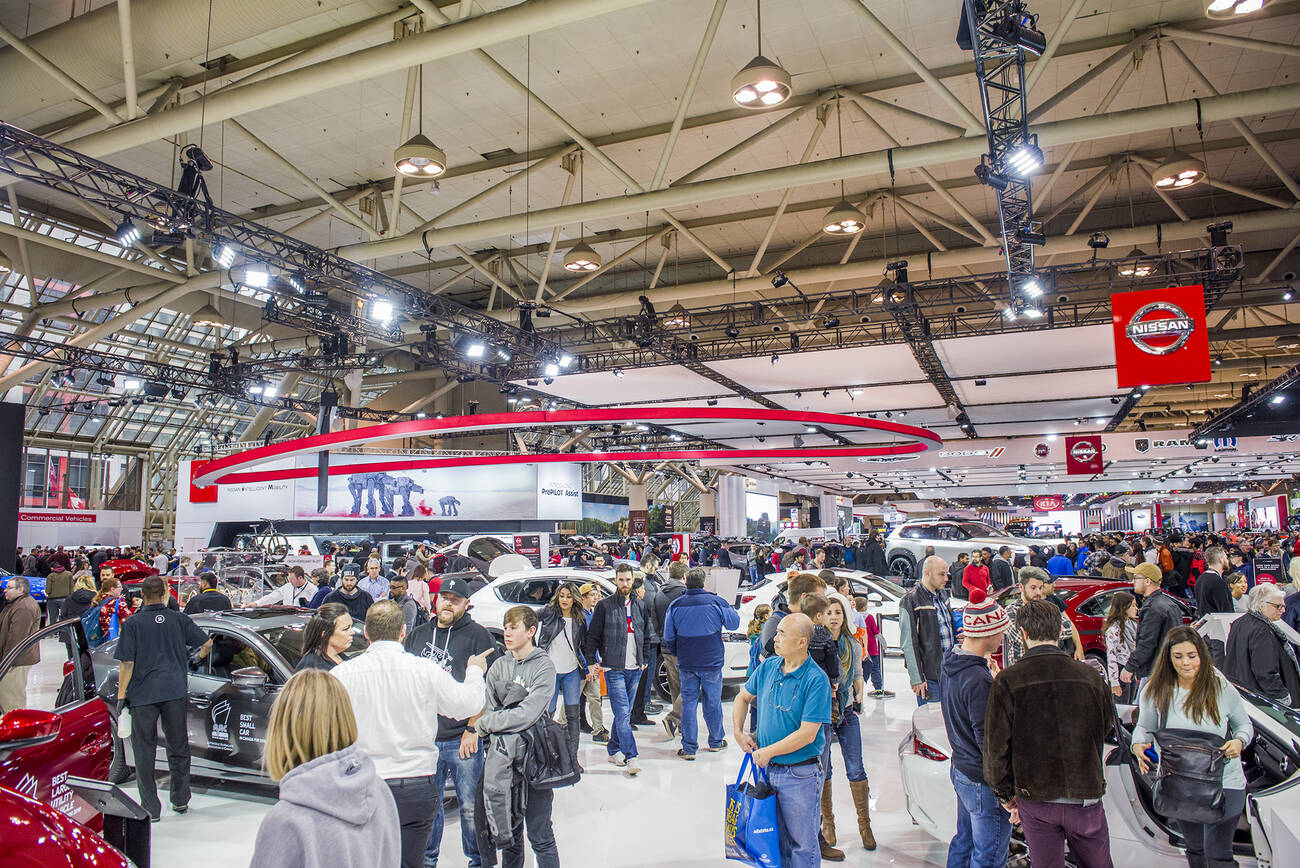 Weekend events in Toronto will help you make the most of mercifully warm temperatures as February draws to a close. From skating parties to outdoor art exhibitions, there's lots to lure you out of hibernation. It's also the last chance to catch all the eye candy at the sprawling Auto Show this year.

Voice Pieces (February 23 @ Gardiner Museum)
In support of the Yoko Ono's recently opened Riverbed exhibition, Voice Pieces offers an interactive look at the human scream.
Beats and Bents (February 23 @ The Bentway)
If you're mourning the end of DJ Skate Night, the city's newest skating rink under the Gardiner will play host to its own skate night this weekend, this one featuring DJORK.
UBUNTU (February 23 @ Luanda House)
Mix it up with the sounds of Afro, funk, and hip hop at the 2nd annual UBUNTO event.
Mama Raty's Finnish Meat Pie Pop-Up (February 23 @ Left Field Brewery)
Get in on some tasty Finnish Meat Pies stuffed with beef and rice for one day only from 4 p.m. to 9 p.m. on Friday.
Bloor-Yorkville Icefest (February 24-25 @ Village of Yorkville Park)
It might not be frigidly cold this weekend in Toronto, but you can get your fill of ice at this festival, which features live ice carving demonstrations.
Black Diamond Ball (February 24 @ Fairmont Royal York)
The Fairmont Royal York hotel will host this year’s Black Diamond Ball featuring a night of music, dancing, and food.
Akin Winter Gallery Crawl (February 24 @ Koffler Gallery)
Take a free tour of some of the city’s well-known galleries, starting with Artscape Youngplace and ending with an exhibition tour at Koffler Centre for the Arts. All are welcome.
No Foreigners (February 25 @ The Theatre Centre)
This play takes a look at the other side of shopping malls by exploring themes of loss and resilience from the Chinese diaspora.
The Wedding Co. (February 25 @ Artscape Wychwood Barns)
The Wedding Co. is back for its 17th year, bringing together over 70 exhibitors for a one-of-a-kind celebration to life.
Fresh Notes Comedy Festival (February 23-24 @ The Social Capital Theatre)
Canada's largest festival of musical comedy will feature sketch, improv and stand up comedians from across the country.
After Wrestling (February 24 - March 18 @ Factory Theatre)
This weekend marks the opening of After Wrestling, a dark comedy show that seeks to push the genre to a whole new level.
The Ethnic Rainbow (February 25 @ Comedy Bar)
LGBTQ comedians of colour take centre stage in the world premiere of any showcase of this kind in Canada.
Movie Night in the Brewery (February 23-24 @ Henderson Brewing Co)
What movie? It's a secret. All you need to know is there'll be tons of free popcorn.
Giving Up The Day Job (February 23 @ Hot Docs Ted Rogers Cinema)
DJ duo Above & Beyond star in this documentary screening that chronicles their journey to stardom and reimagines some of their biggest hits.
Big Wild (February 23 @ Velvet Underground)
Big Wild makes a stop in Toronto during the brief Canadian leg of his North American tour.
Bananarama (February 23 @ The Danforth Music Hall)
The female 80s group behind some of the decades biggest hits comes to Danforth Music Hall for one night only.
Brown Girl Begins (February 24 @ AGO - Art Gallery of Ontario)
Director Sharon Lewis author Nalo Hopkinson and the film stars will be on hand for the premiere of Brown Girl Begins, followed by a gala reception featuring live music.
Cari Lekebusch (February 24 @ The Jam Space)
Legendary DJ and producer Cari Lekebusch is back in Toronto for one night only, accompanied by a some of the city’s hottest names in techno.
Deer Tick (February 24 @ Lee's Palace)
Indie band Deer Tick is set to make a stop in Toronto to play their unique blend of folk, blues, and country set at Lee’s Palace.
Shiba San (February 24 @ NOIR inside REBEL)
Dress to impress as French house and hip-hop musician Shiba San embarks on his North American tour.
Alan Doyle (February 24 @ Massey Hall & Roy Thomson Hall)
Massey Hall will be host to Canadian musician Alan Doyle of folk rock band Great Big Sea fame, playing both his new and classic hits.
Wallows (February 24 @ Mod Club Theatre)
Cali rock makes it way to Toronto as Wallows arrive for part of their North American Winter Tour.
Higher Brothers (February 25 @ The Danforth Music Hall)
One of the biggest names in Chinese hip hop is here to rock the mic and take their clever wordplay to the global stage.
Arabian Knights (February 23 @ Club 120)
The 2nd anniversery of Arabian Knights LGBTQ promises an exciting night of music and dance in support of Middle Easterners living with HIV/AIDS.
Saddle Up! (February 23-24 @ Owl's Club)
Break out your rawhides and dancin’ boots for a night of bluegrass and honky tonk.
80s & 90s Dance Party (February 24 @ Remix Lounge)
Break out the Adidas and hit the dance floor for a night floor of retro tunes and the best jams from the 80s and 90s.
Apres-Ski (February 24 @ The Porch Toronto)
Apres-Ski is back at the Porch for a fourth year and will feature ski shots, snow machines, live music, and a hot tub to help wart off the winter blues.
Ice Breakers (January 19 - February 25 @ Multiple Venues)
The weekend marks the last chance to see the five art installations at the Waterfront. Check them out while you can!
Giro d'Italia (February 15-25 @ Multiple Venues)
This is the last weekend to try out 16 of Toronto's best Italian restaurants and explore Italy's cultural regions during this 10-day festival.
International Autoshow (February 16-25 @ Metro Toronto Convention Centre)
The Auto show moves into its last weekend, giving you one final chance to catch a glimpse at some of the world’s newest models from the best names in the industry.
The Radiant Child (February 25 @ Hot Docs Ted Rogers Cinema)
Chronicling the meteoric rise and fall of art-world wunderkind Jean-Michel Basquiat, The Radiant Child is part of the Game Changers: Throughout Black History Month series.

by Lisa Power via blogTO
Posted by Arun Augustin at 10:45 AM