A guide to the hidden spaces of the TTC 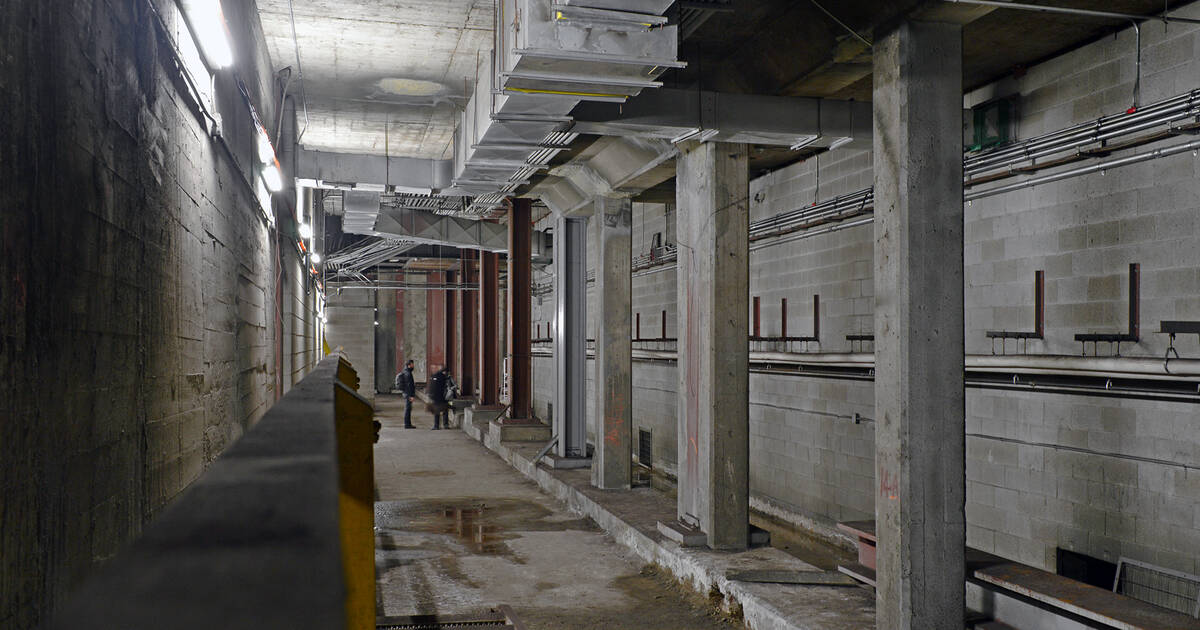 Due to its relatively young age, the TTC subway system doesn't boast the spoils of abandoned stations that cities like New York and Paris do, but there are still plenty of hidden spaces and curiosities found in our underground transit network.

The existence of some of these spots is widely known, while others remain mysterious.

Lower Bay Station (or, as the TTC refers to it, Bay Lower) is surely the best known of Toronto's hidden underground spaces. The ghost subway station was in service briefly in 1966 when the TTC tried its interlining system, which turned the city's two subway routes into three. 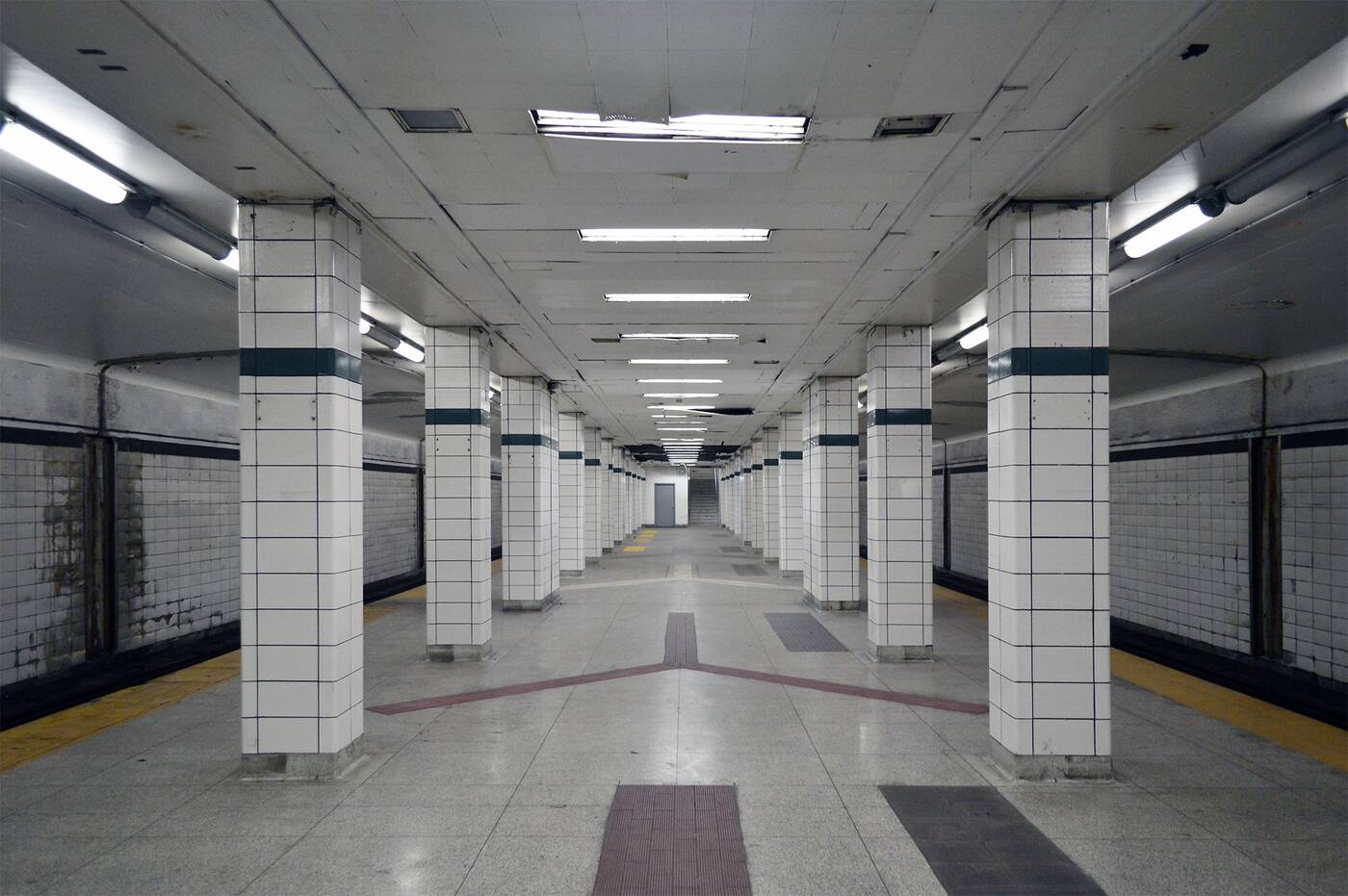 One platform serviced the Bloor-Danforth Route, while the other was a stop on the Danforth-University-Yonge Route. The experiment failed for a number of reasons, and the lower platform was promptly decommissioned.

It now serves as an area for training exercises and film shoots, though it has also been opened to the public for events like Nuit Blanche in the past.

Lower Bay isn't the only ghost station on the TTC, though. Underneath Queen Station, there's the shell of a streetcar subway station that would likely have taken the name City Hall, but is now typically referred to as Lower Queen or Queen Lower.

It was partially built in anticipation of Queen Street transit line that was never built. 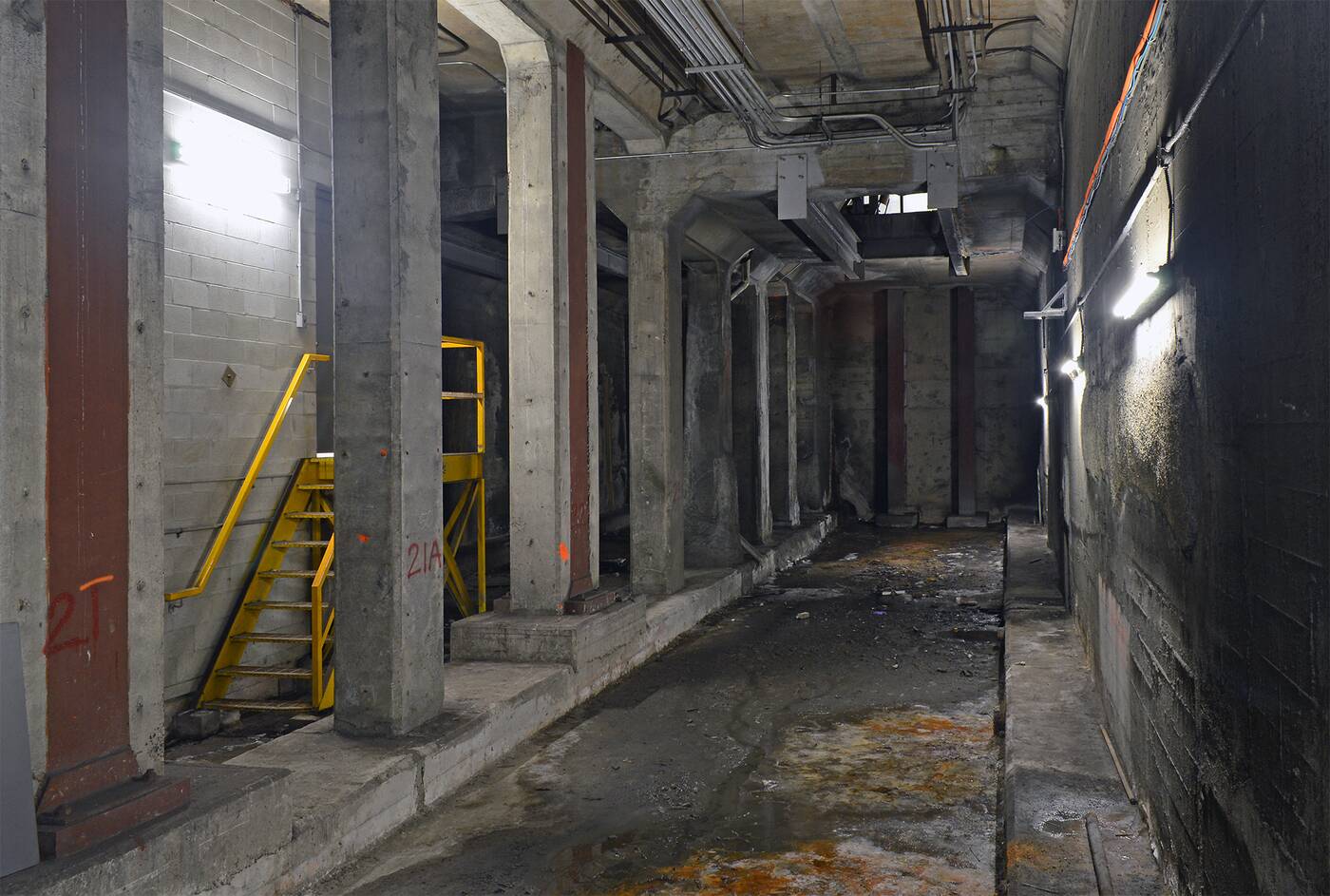 This is every bit the dark and dank place you'd imagine it might be, but little do many people know that TTC riders pass through a part of Lower Queen every time that they transfer through the tunnel between the north and southbound tracks.

In fact, from inside the closed off area, you can see the bottom of the escalator that passengers travel on.

This unused station shell isn't the only secret that Queen Station is hiding. When the Maritime Life Building was completed in 2003, the original sidewalk staircase entrance on the north side of Queen just east of Yonge was grated over and boarded up.

Amongst other things, here you'll find a old route map that advertises the price of a Metropass at $85.75 (when purchased annually). 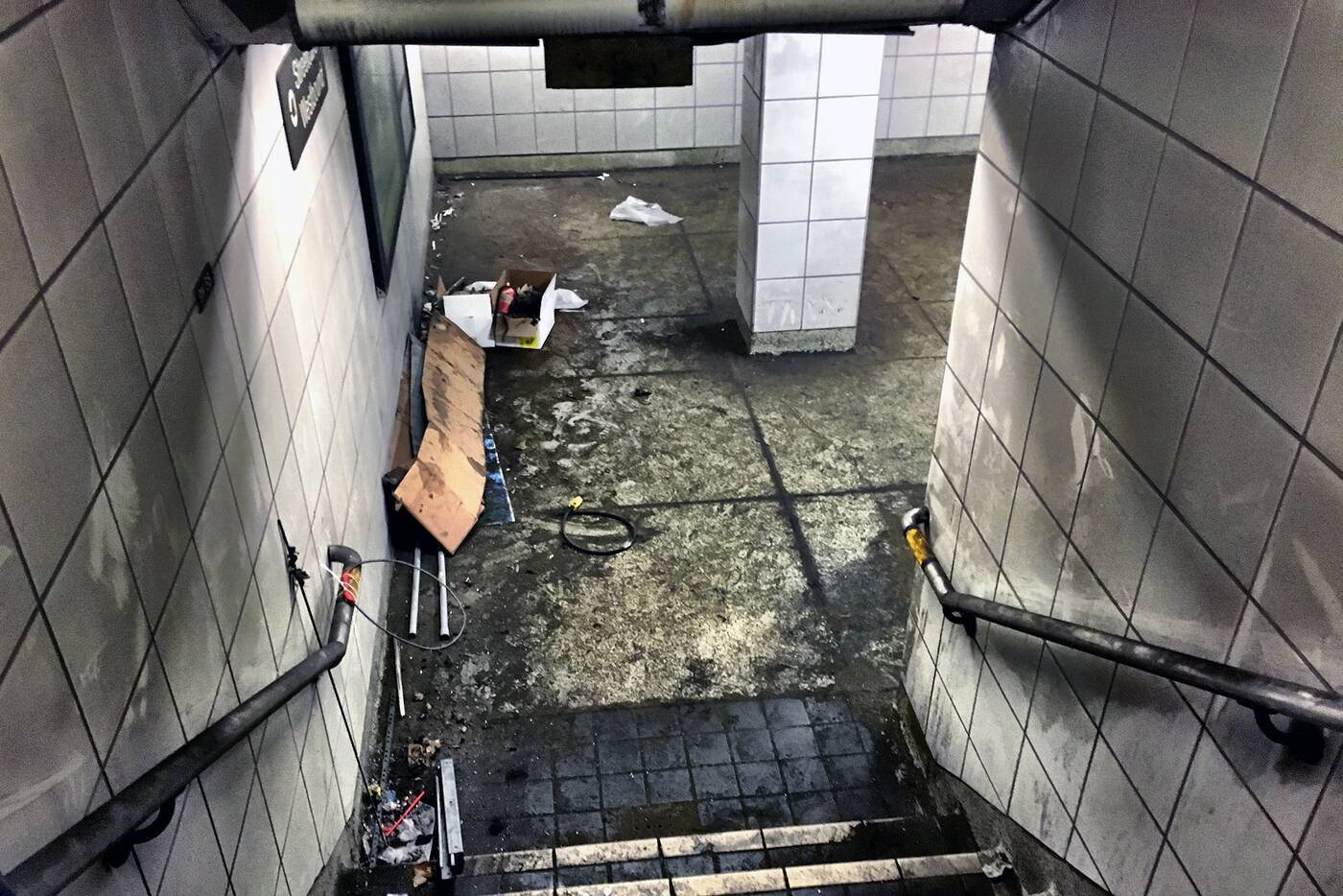 If you look down the grate from street level, you can just see a glimpse of the station from a crack in the doors used to seal it off.

Other areas of the TTC aren't accessible for media tours and have only been seen by Commission staff and the most adventurous of urban explorers.

Perhaps the most mysterious of these is "the attic" in Lawrence Station, which you can get a glimpse of when you head up the long escalators to the Bedford Park exit on the north side. 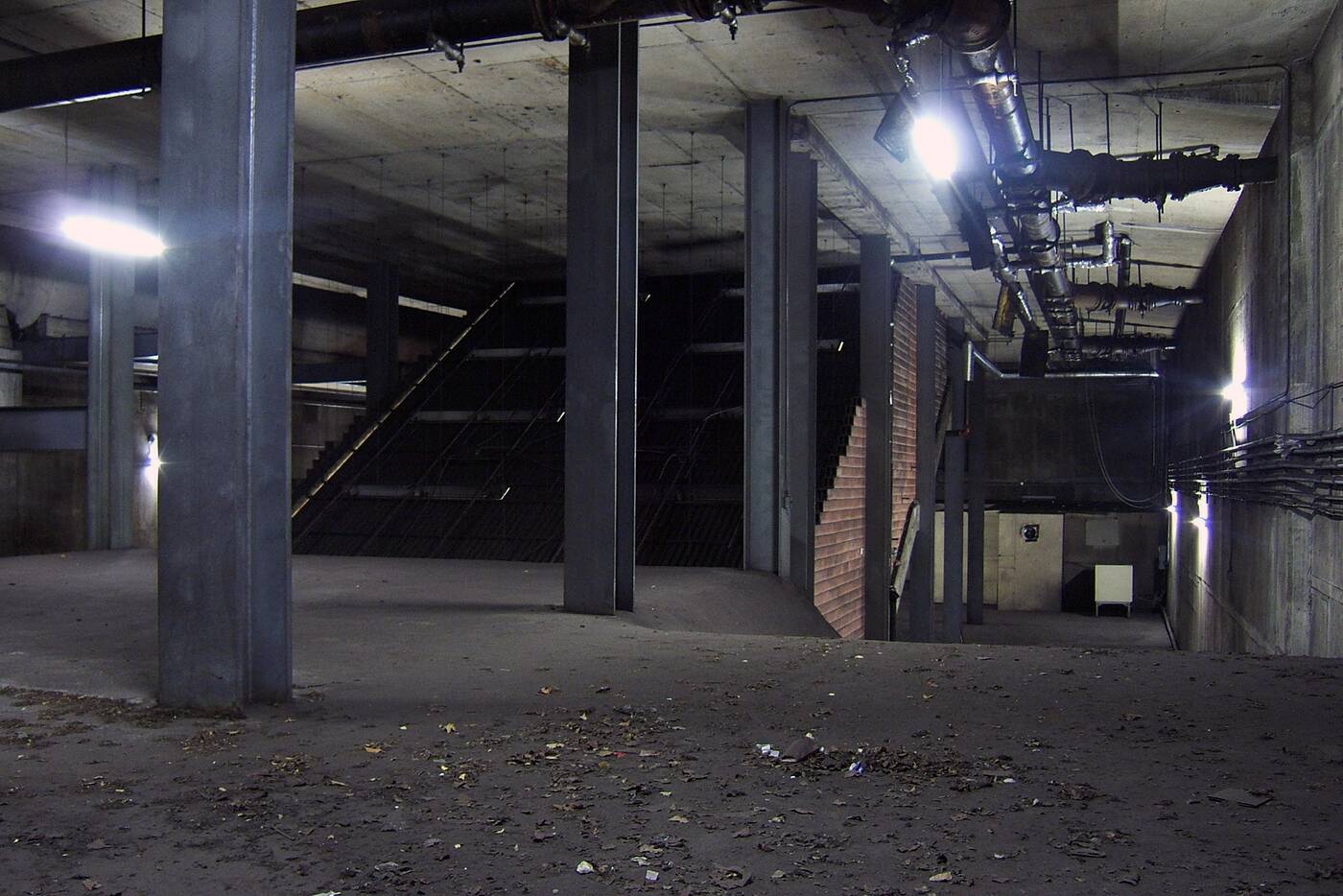 The "attic" at Lawrence Station. The sloped section is the passenger escalator. Photo by Jeff Moon.

The most thorough description of this surprisingly big area comes from legendary Toronto urban explorer Ninjalicious. It sounds like something from a Kafka novel.

"At the top of the stairs lies a huge, dark, bizarre 'attic' to the station, containing many smaller rooms, ladders leading down to ventilation shafts and up to a street level grate in the middle of Yonge Street, overhangs where one can watch the subway pass underneath, and so much more. This area has a very tall ceiling and is as long and wide as soccer field, and it's simply breathtaking to behold."

I would not recommend actually trying to access this space, but when you take the escalator up, look for the glimpse that you get of the secret area.

There are tons of smaller hidden areas along the TTC route like mechanical rooms, emergency exits, overflow tunnels (look east at Ossington for a third set of tracks that occasionally a train will occupy), but the last of the really intriguing unseen places related to the subway system is, of course, the transit control room. 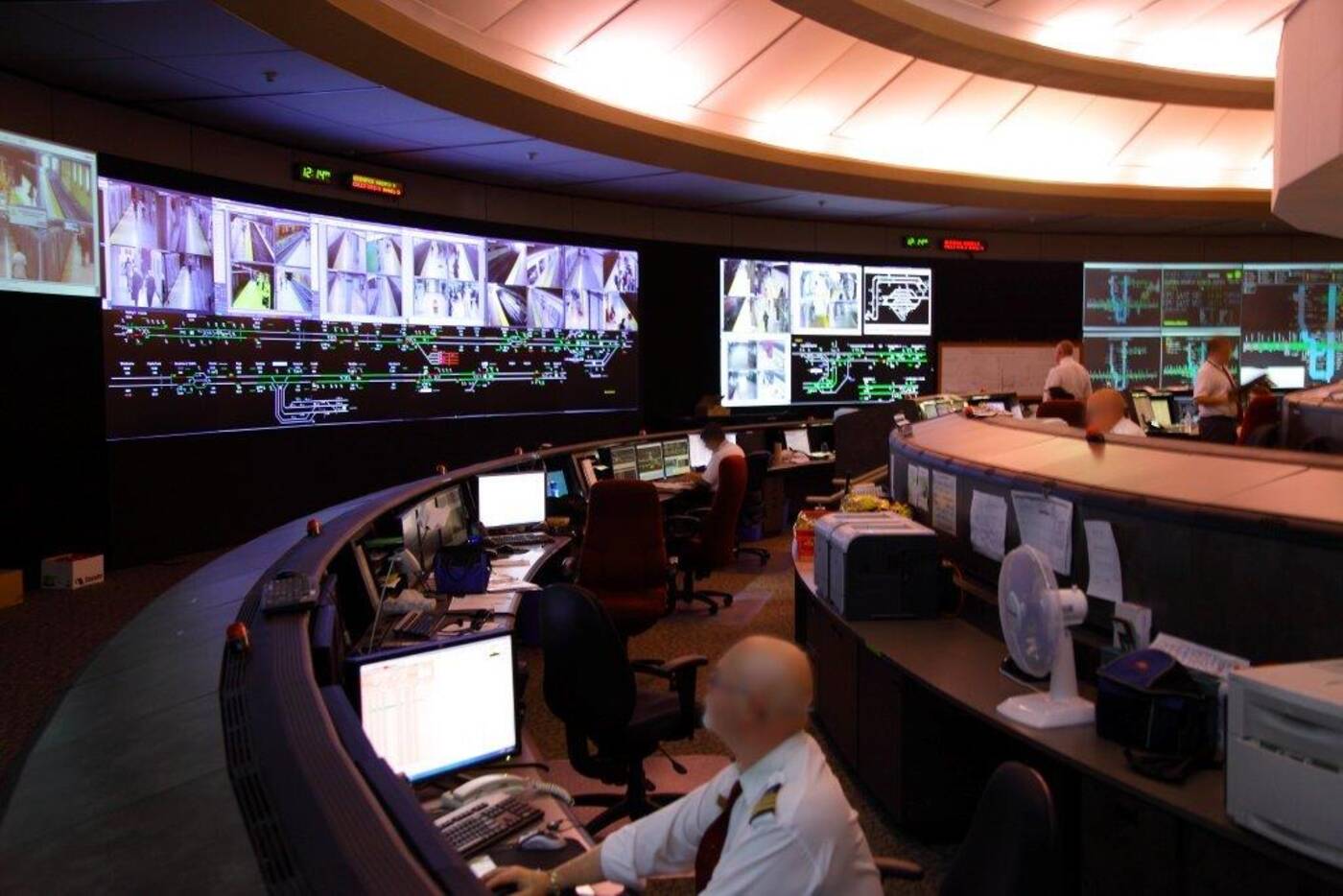 This isn't located on the subway line, per se. Rather, you'll find this "war room" at the sprawling Hillcrest complex. Naturally, it's not open to the public, though recently media have been invited in to show what goes on behind the scenes.

Management of the entire system takes place in this hive of activity where re-routing decisions are made to keep trains and streetcars running as smoothly as possible. It's a 24-hour operation, though the morning and afternoon commute are when the room becomes most active.

Riding the TTC can be the most mundane of activities, but imagining all the hidden areas within the system is one way to add a little bit of intrigue to your commute. There are telltale signs marking the entrances to many of these secret spots, which exist just on the other side of our transit trips.

by Derek Flack via blogTO
Posted by Arun Augustin at 6:52 AM