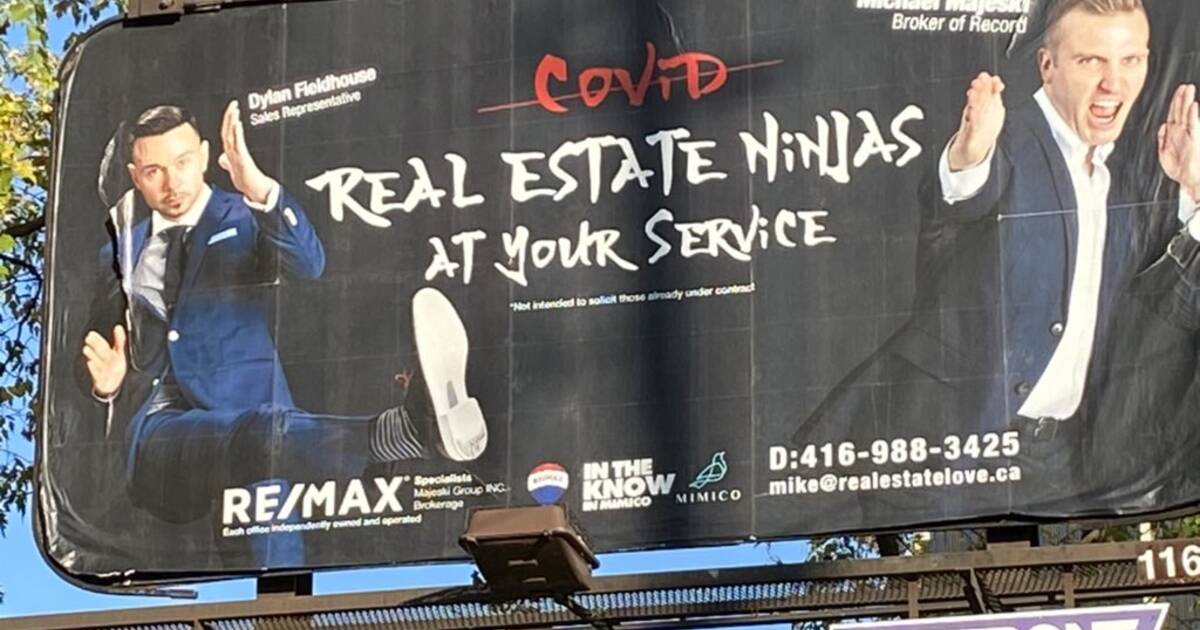 Today in white people apologizing for inadvertent yet harmful acts of casual racism, a Toronto realtor has promised to remove an offensive billboard that depicts himself as a "COVID real estate ninja."

The billboard in question, located in Mimico on Royal York Road, just south of Evans Avenue, shows realtors Mich​ael Majeski and Dylan Fieldhouse of the Majeski Group Inc. Brokerage posing in moves suggestive of the martial arts kung-fu and karate.

"COVID real estate ninjas at your service," reads a block of text between a kicking Fieldhouse and hand-chopping Majeski.

Acclaimed Toronto chef Trevor Lui shared a photo of the giant ad on Twitter Friday morning, writing "Nah bros ... this shit is (I shouldn't have to say it). You know better."

Nah bros ... this shit is (I shouldn’t have to say it). You know better. pic.twitter.com/SZ4rf9SErc

Many others on Twitter agreed, expressing confusion over how such a billboard even came to be.

"Your billboard is awful and offensive. I'm irritated, but mostly I'm tired that so many people like you live with blinders on and haven't done the work to understand why this is wrong," wrote Toronto TV host Pay Chen when sharing the image on her own feed.

"Your ignorance is showing. Do better."

When contacted for comment, Majeski explained that he was aware of the criticism and that he is working to have the billboard removed immediately.

"At first, I was surprised to read these responses to my ad, but after reading them and looking back at the ad, I see a lot of validity in what people are saying," he told blogTO on Friday.

"What I have learned about building inclusive communities is always to listen and understand from others in order to validate and support community voice — particularly during these difficult COVID times."

Wild nobody thought “hmmmm maybe this might not be a good idea” between conceptualizing the shoot, hiring a photographer, hiring a graphic designer, submitting the ad to the billboard company...

"I am learning to unlearn a lot of my white privilege so that I can best support our diverse community," Majeski continued. "I am also apologizing to anyone who felt belittled by our insensitive message. It will not happen again."

The realtor stressed that he was 100 per cent responsible for the direction of the ad, and that Fieldhouse had "no fault in this matter."

It's hard to understand, still, how nobody who saw the billboard before it went up noticed the problematic elements.

"Think about how many layers this had to get through before it was eventually put up," said Lui. "The brokerage, the marketing team, corporate Remax, the photographer, the graphic designer, the ad company..."

"This is about awareness. The process of getting this billboard up is more appalling when we think about it."