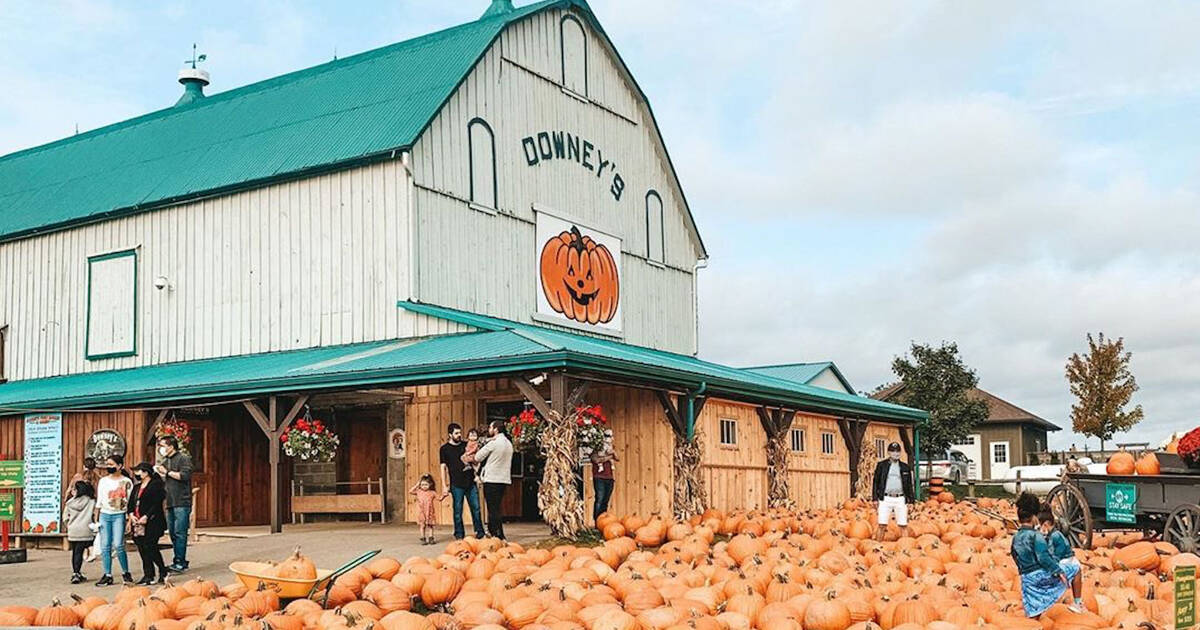 A farm near Toronto is closing their front lawn pumpkin patch for the rest of the season for the first time in over 30 years.

Downey's Farm has been well known as a great fall getaway less than an hour's drive from Toronto where you can pick out a prime pumpkin, but the iconic location will be a little different this year. Their front lawn patch won't be filled with pumpkins, and they cancelled their annual Pumpkinfest.

In light of today’s announcement by Premier Doug Ford, re-enacting restrictions throughout Peel Region, we have made the difficult decision to remove our front lawn Pumpkin Patch for the remainder of this fall season. We have worked hard to keep the tradition alive this year as pumpkins have been on the front lawn every fall since 1986. Pumpkins will still be available for purchase every day until October 31st. Our Barn Market store is open daily from 9am to 5pm. We ask that you please limit the number of people from your household visiting the store. Our Farmyard Play Area remains open with limited capacity. Tickets must be purchased online prior to visiting the farm. The Farmyard Play Area is completely sold out until Tuesday, October 13th and we will not be releasing anymore tickets until the middle of next week. Thank you for your support and understanding. #staysafe #downeysfarm #caledon #pumpkins

"We have made the difficult decision to remove our front lawn Pumpkin Patch for the remainder of this fall season," reads an announcement Downey's made on social media. "We have worked hard to keep the tradition alive this year as pumpkins have been on the front lawn every fall since 1986."

The lawn is normally the site of numerous fall selfies and family portraits, so if you didn't get a chance to take pictures in the magical orange field yet this season you'll have to wait until next year.

"Since 1986, we have placed our pumpkins, one by one and by hand, on our front lawn. Each year, there are over 10,000 pumpkins that create 'The Sea of Orange'. These pumpkins have become a staple in family photo albums and often take over Instagram feeds in October," says Darlene Downey of Downey's Farm.

"With the announcement that Peel Region was moving to a modified Stage 2, we made the difficult but necessary decision to put all these pumpkins, again one by one, and by hand, and place them in bins. A fence was built around the area to monitor the number of guests in the area, as well as enforcing time limits."

Pumpkins are still available until October 31, the Barn Market store is open 9 a.m. to 5 p.m. and the Farmyard Play Area is open with limited capacity, but tickets have to be purchased online prior to visiting and they often sell out. The farm also asks that people limit the number of people visiting from your household.

"Although this has had a huge impact on our business, we are committed to being part of the solution. As much as a pumpkin picture at Downey's Farm is part of our guests tradition, it is part of ours too," says Downey.

"We are optimistic that we will be able to build this display of pumpkins again next year. There are still thousands of pumpkins of all shapes and sizes available for purchase."

by Amy Carlberg via blogTO
Posted by Arun Augustin at 7:48 PM