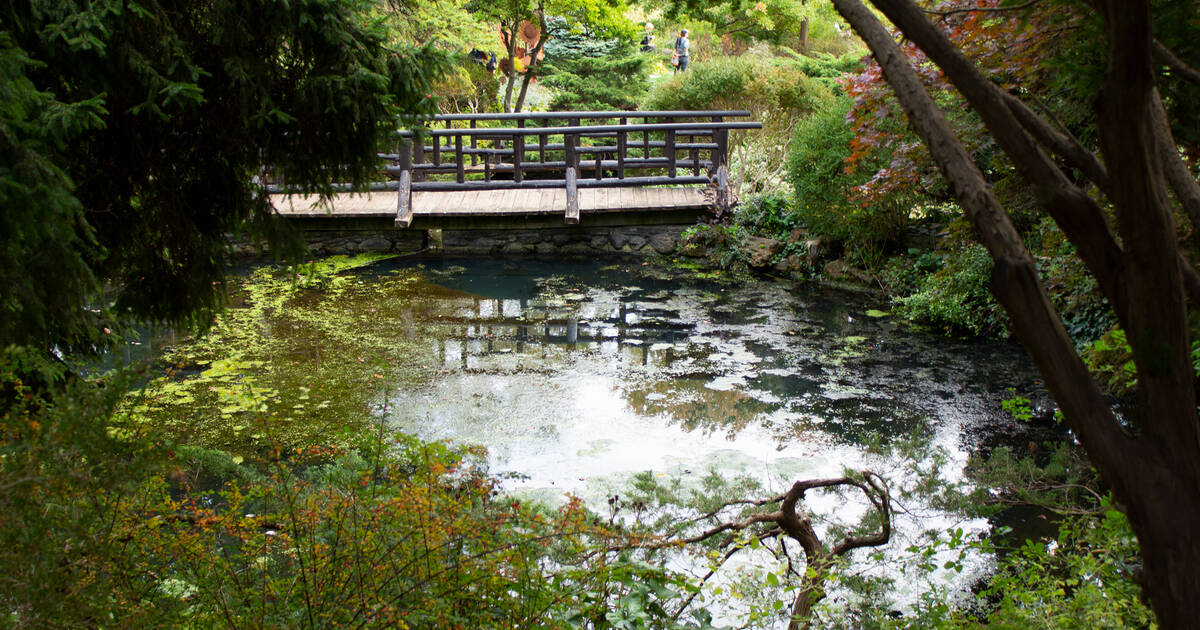 James Gardens is a manicured garden of hilly footpaths and serene rock gardens on the west bank of the Humber River.

Though not nearly expansive as its eastern counterpart, this botanical wonderland feels a lot like the Humber River's answer to Edwards Gardens, which sits near the Don. 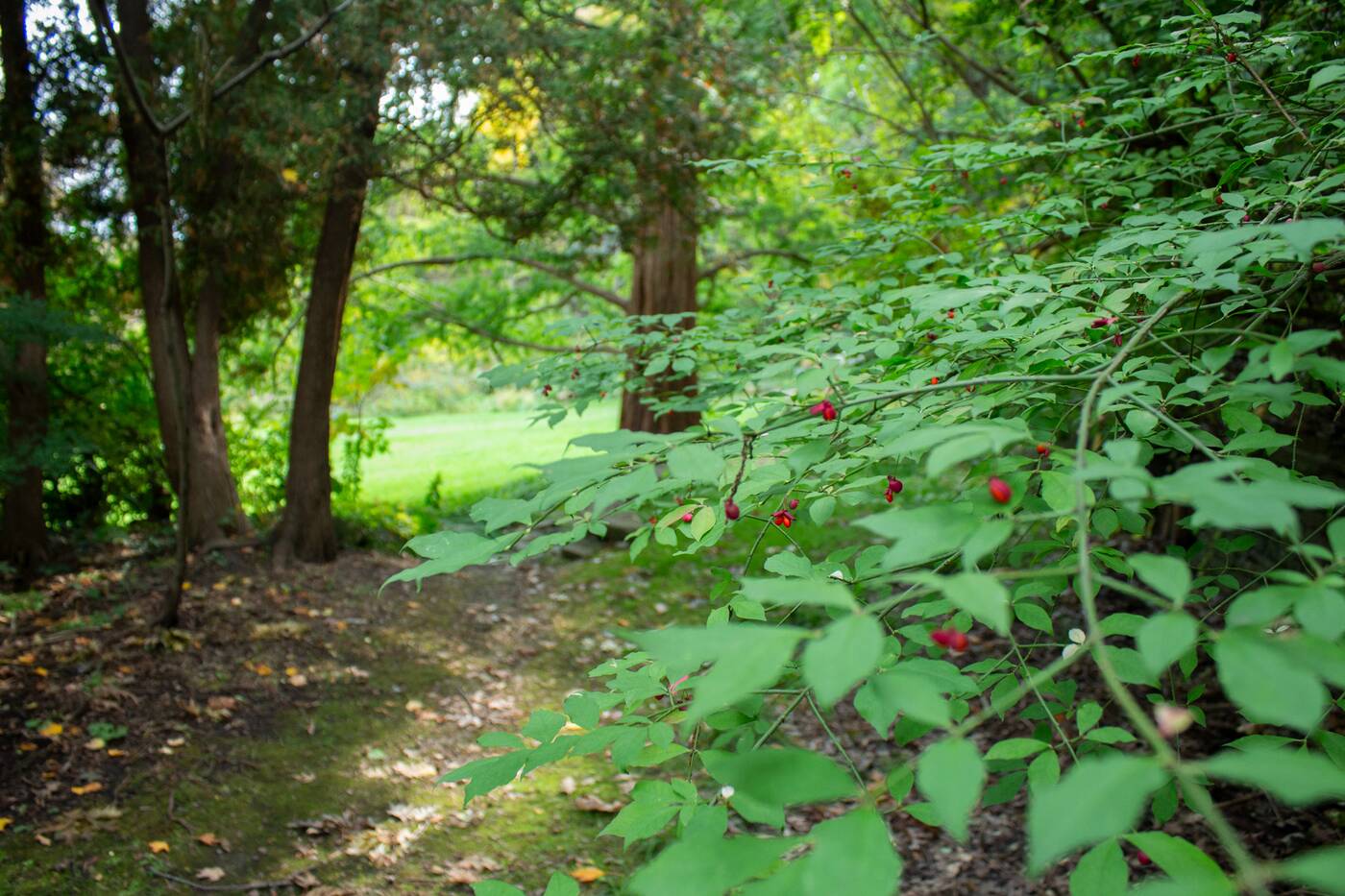 James Gardens is a 21-acre garden on the west bank of the Humber River.

What was once a swampy valley sitting below the home of the rich fish merchant, Frederick Thomas James, is now a fresh-aired reprieve. 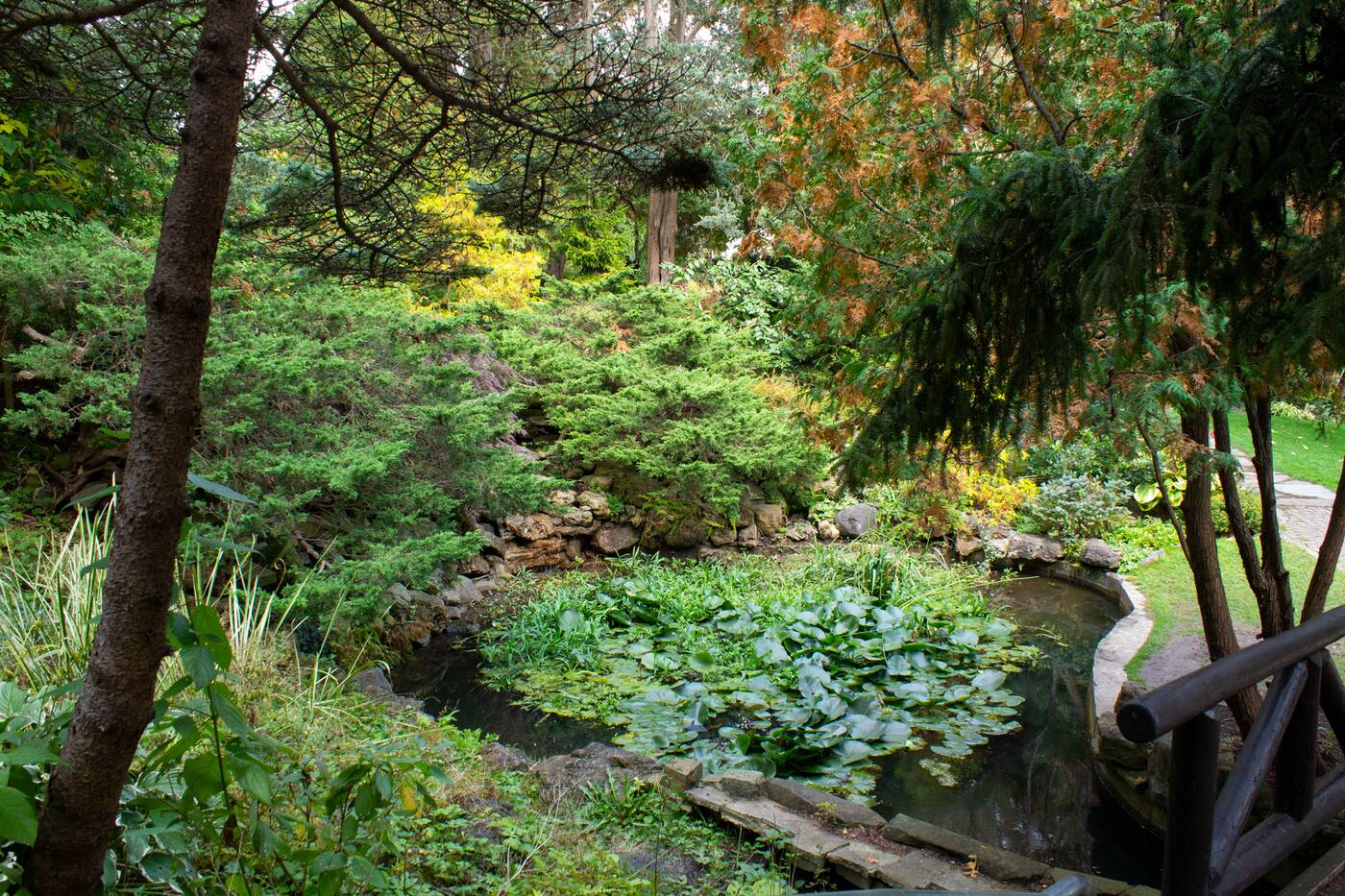 The garden has a series of ponds that are fed by a natural stream.

In the years before the pandemic, its display of tulips, which numbered more than 75,000, had people flocking to its grassy knolls for weddings and sightseeing alike. 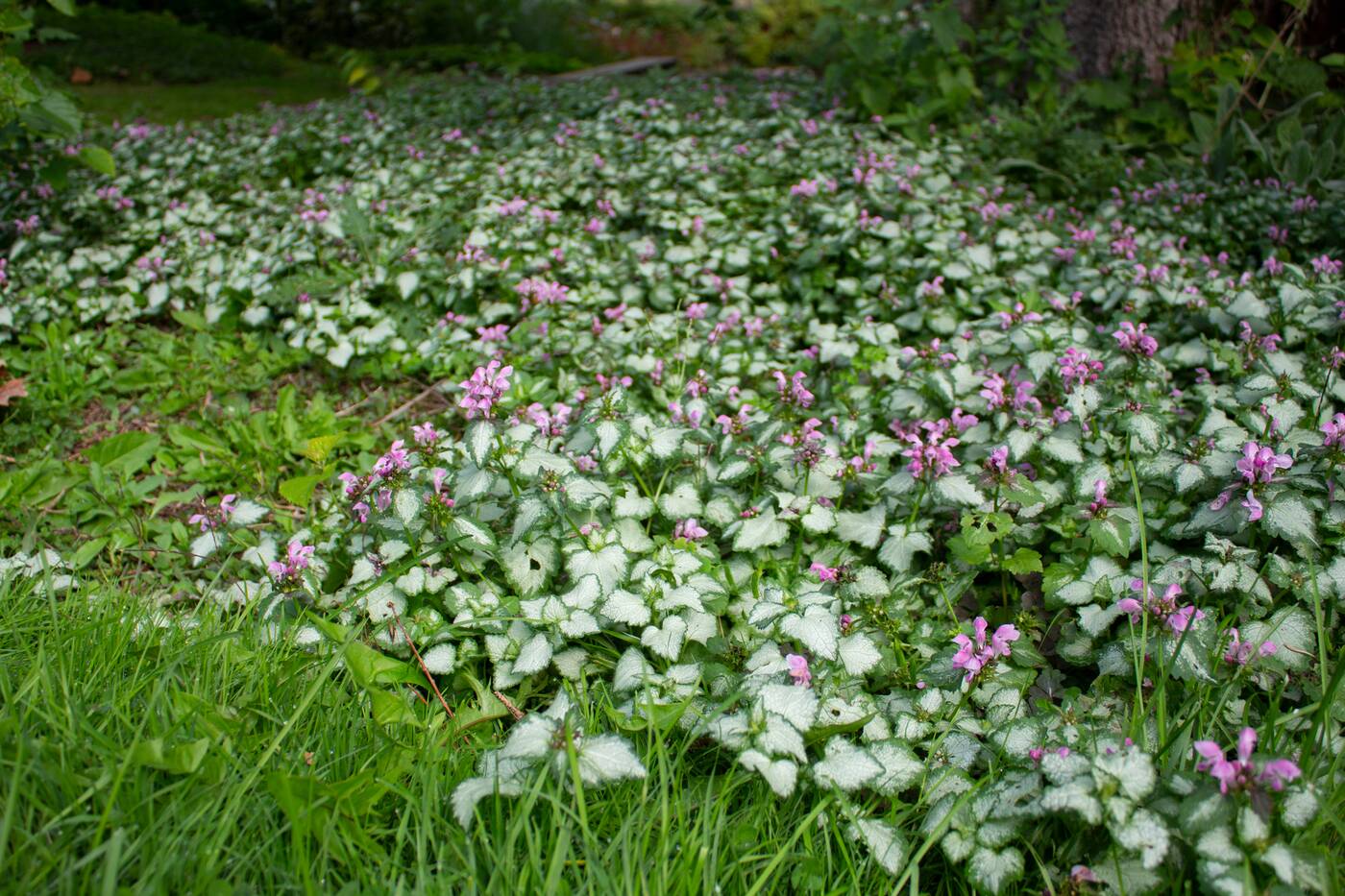 Annual and perennial flowers and shrubs bloom here from spring through the fall.

An early fall-time visit to gardens during lockdown proves just as lush, and far less crowded on a weekday afternoon.

Meditative bridges offer close access to the trickle of waterfalls. Ponds are actually fed by natural springs and streams. I see, not one, but at least 10 chipmunks while I'm here. 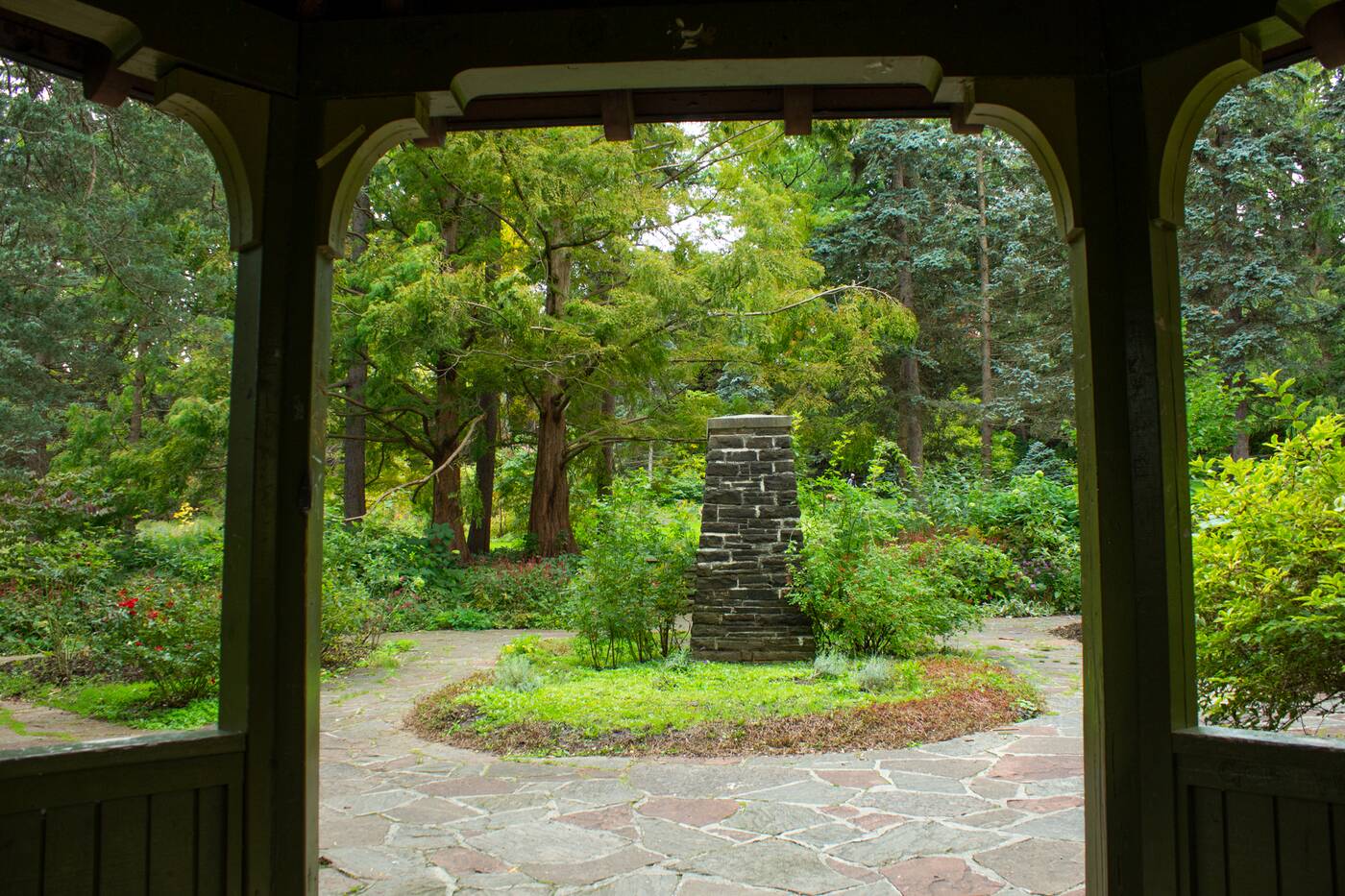 The James Gazebo offers a beautiful view of the surrounding greenery and James Memorial.

Take a seat in the historic James Gazebo for a view of the James memorial, or breathe in that sweet air. Or just sit back to admire the initials of old sweethearts etched into the inner part of the roof. 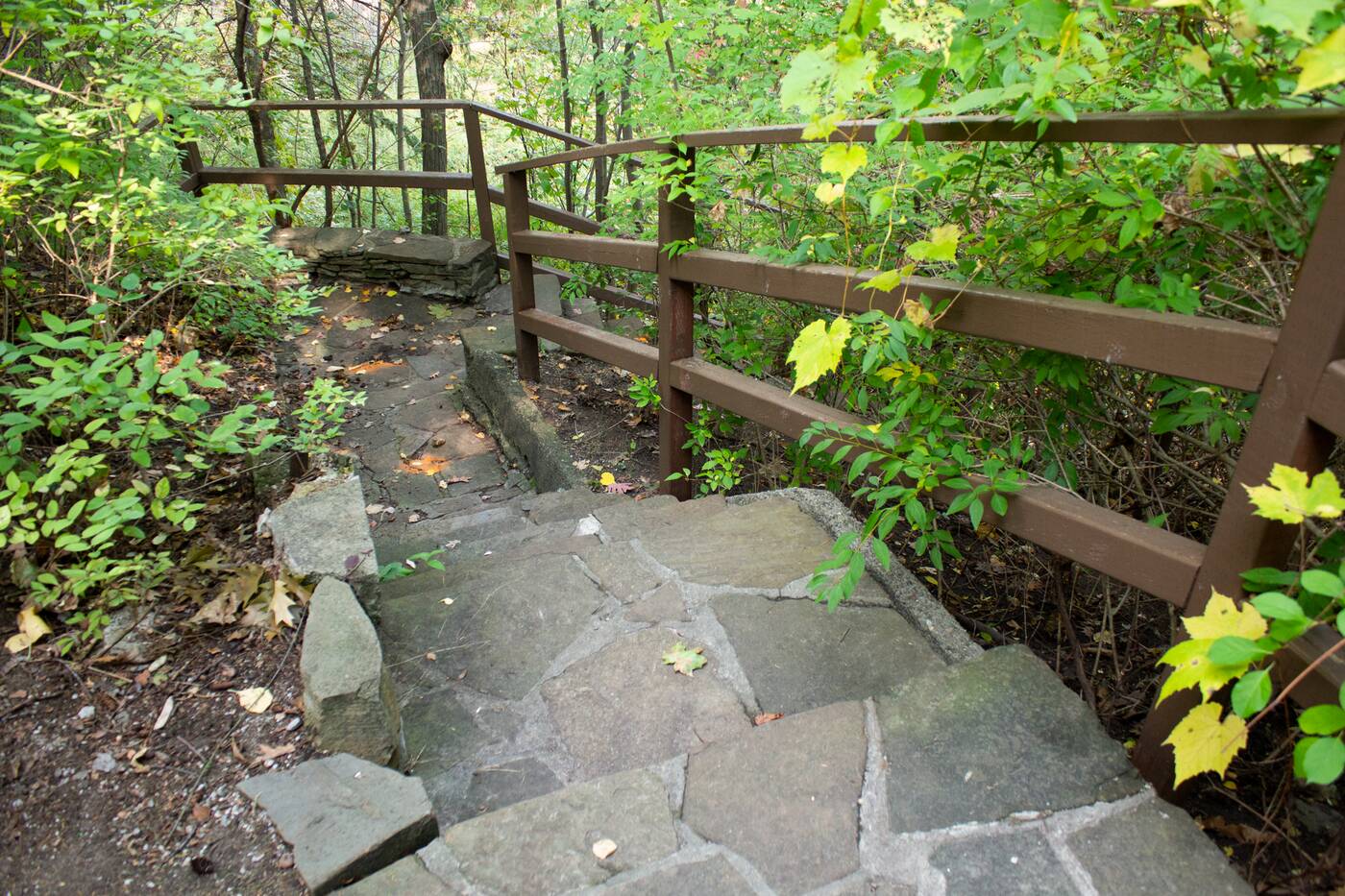 There's a stone step entrance behind the Edgehill House that leads into the park.

I enter through the charming stone stairwell behind the Edgehill House Community Centre, where the horse stables were once located.

There are several other ways to enter via Edenbridge Drive, or the parking lot, marked by the giant duck-feeding pond with the big turtle statue. 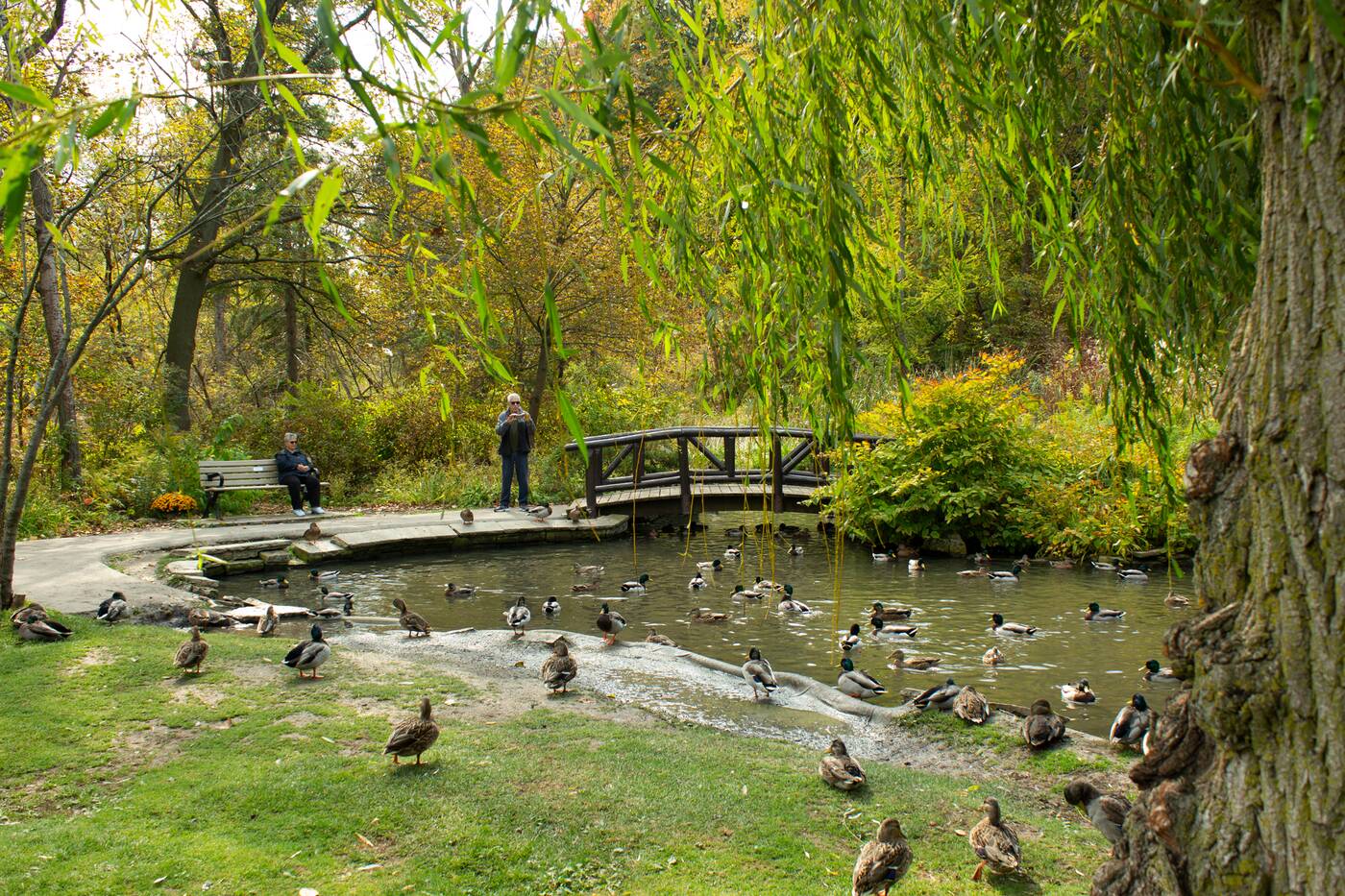 The pond by the parking lot is ideal for duck and geese feeding.

The stately community centre sits in the historic home of James and his wife Margaret Rumney James, dubbed Red Gables.

The building, made from stones quarried from the Humber River Valley, now runs preschool programs and yoga classes. 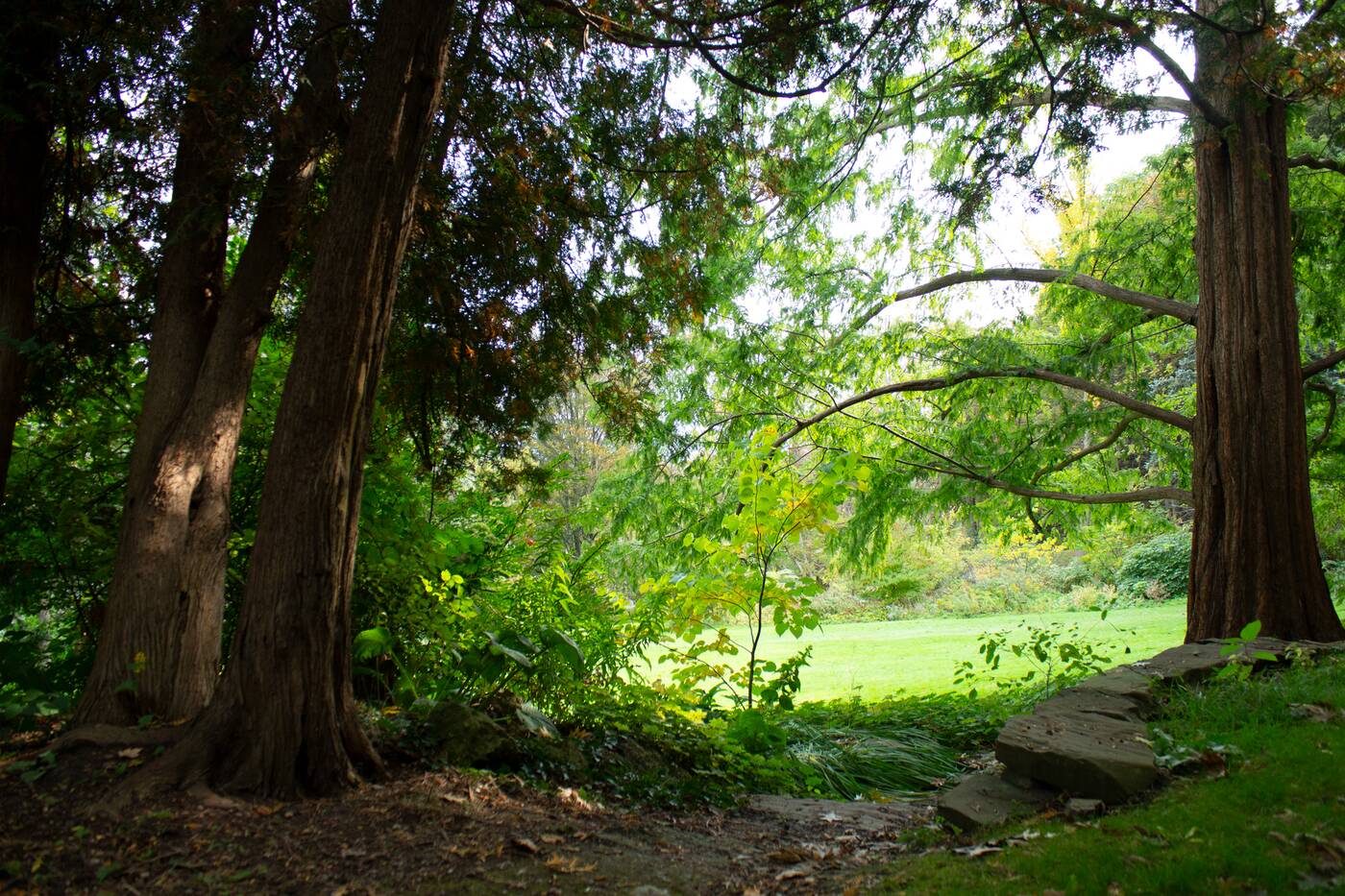 Trees around the property are well-pruned.

It was actually Margaret's father who owned most of this land, until 1908, when it was sold to James as a summer getaway and combined with more property next door.

Over the next few decades, the James couple transformed the surrounding land into sweeping gardens. 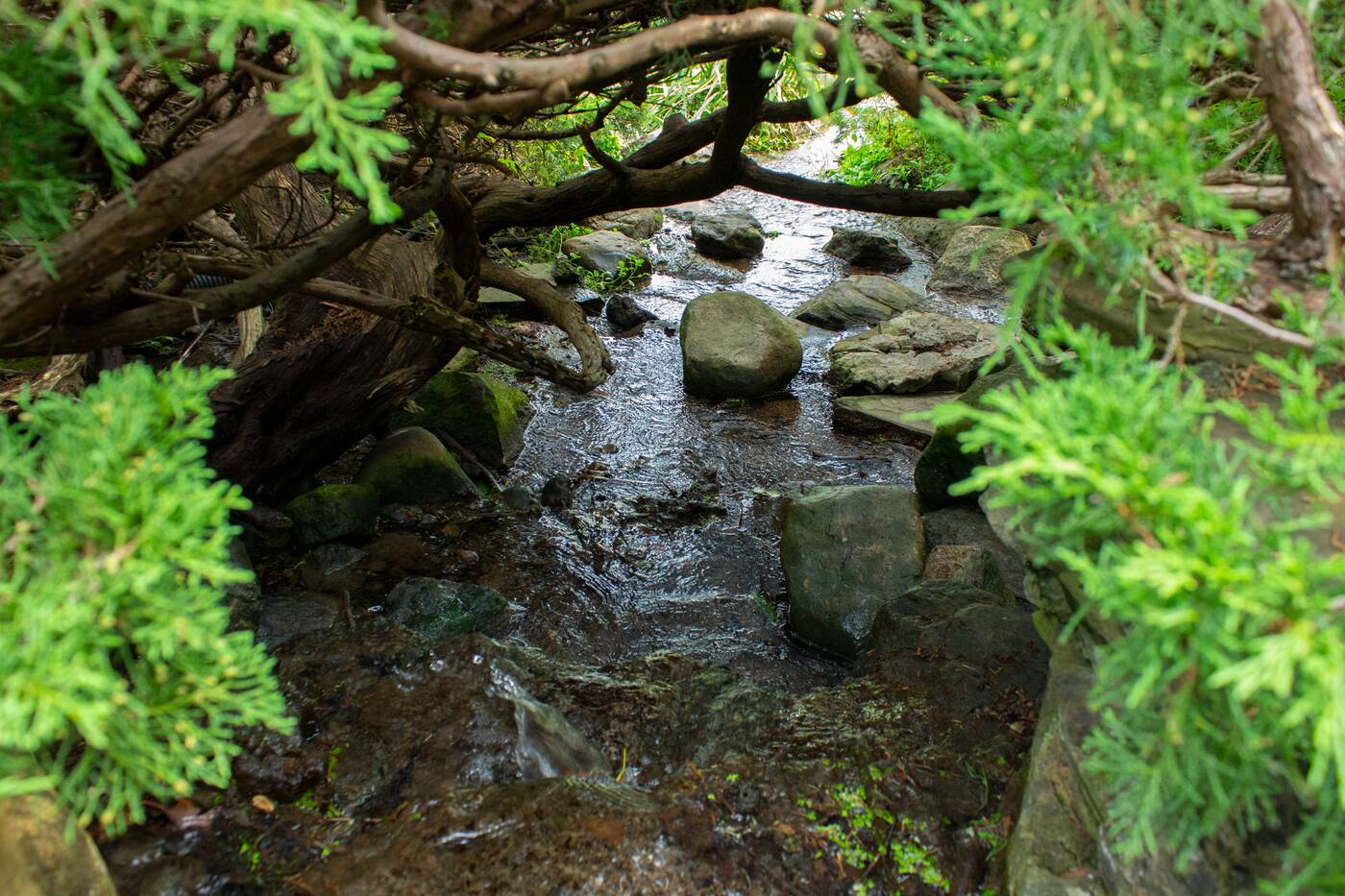 A stone path between a small cedar grove offers a glimpse of the stream running underway.

They added water features in the 1920s, and in the process, allegedly discovered Indigenous artifacts that dated back to 4,000 years old. 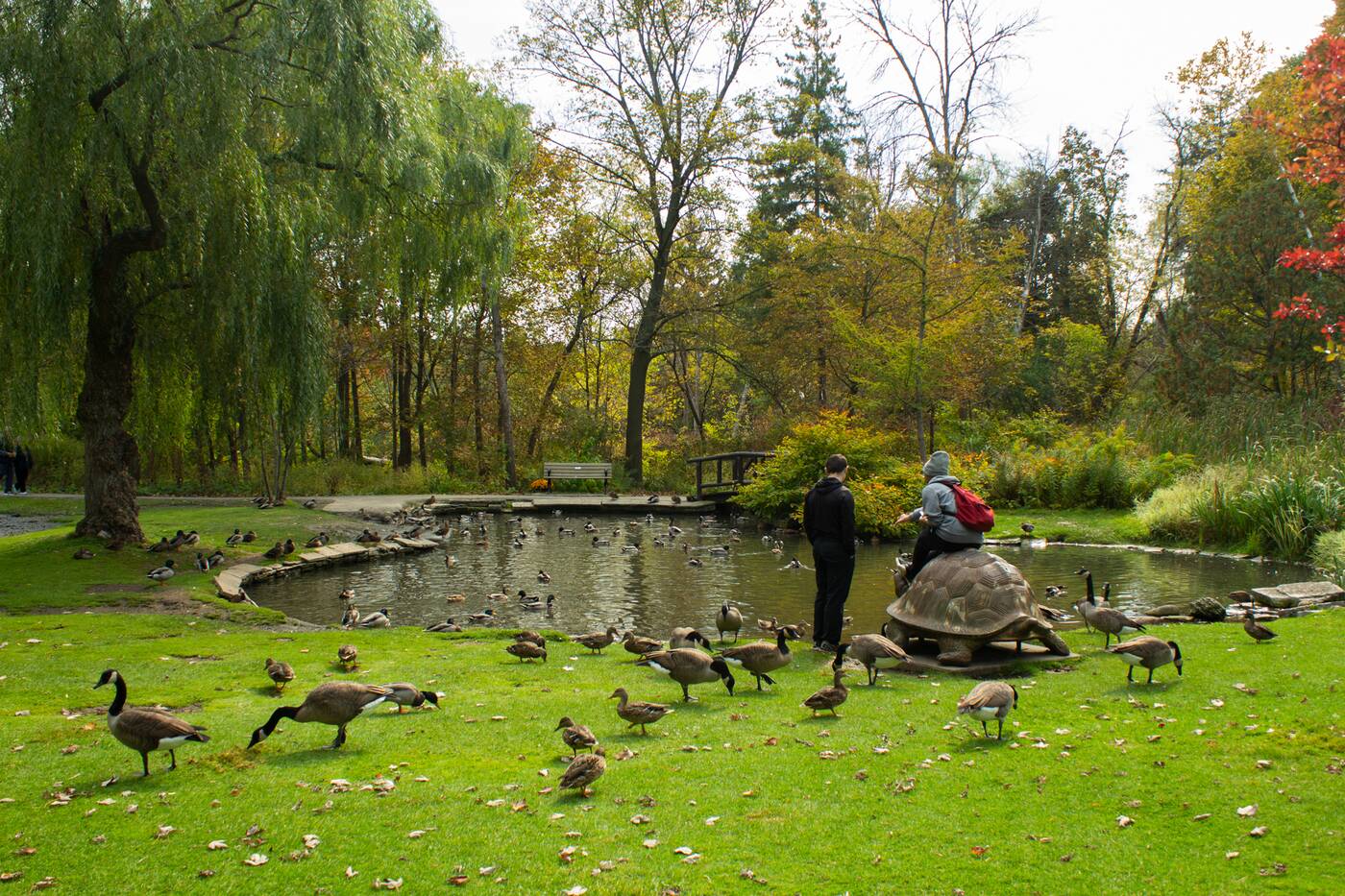 A giant turtle sits on the edges of the giant pond. The source of this turtle is unknown.

It's open year-round to the public now. Trails, seven ponds, and a lawn bowling court in the northernmost part of the park make it one of Etobicoke's most popular natural getaways. 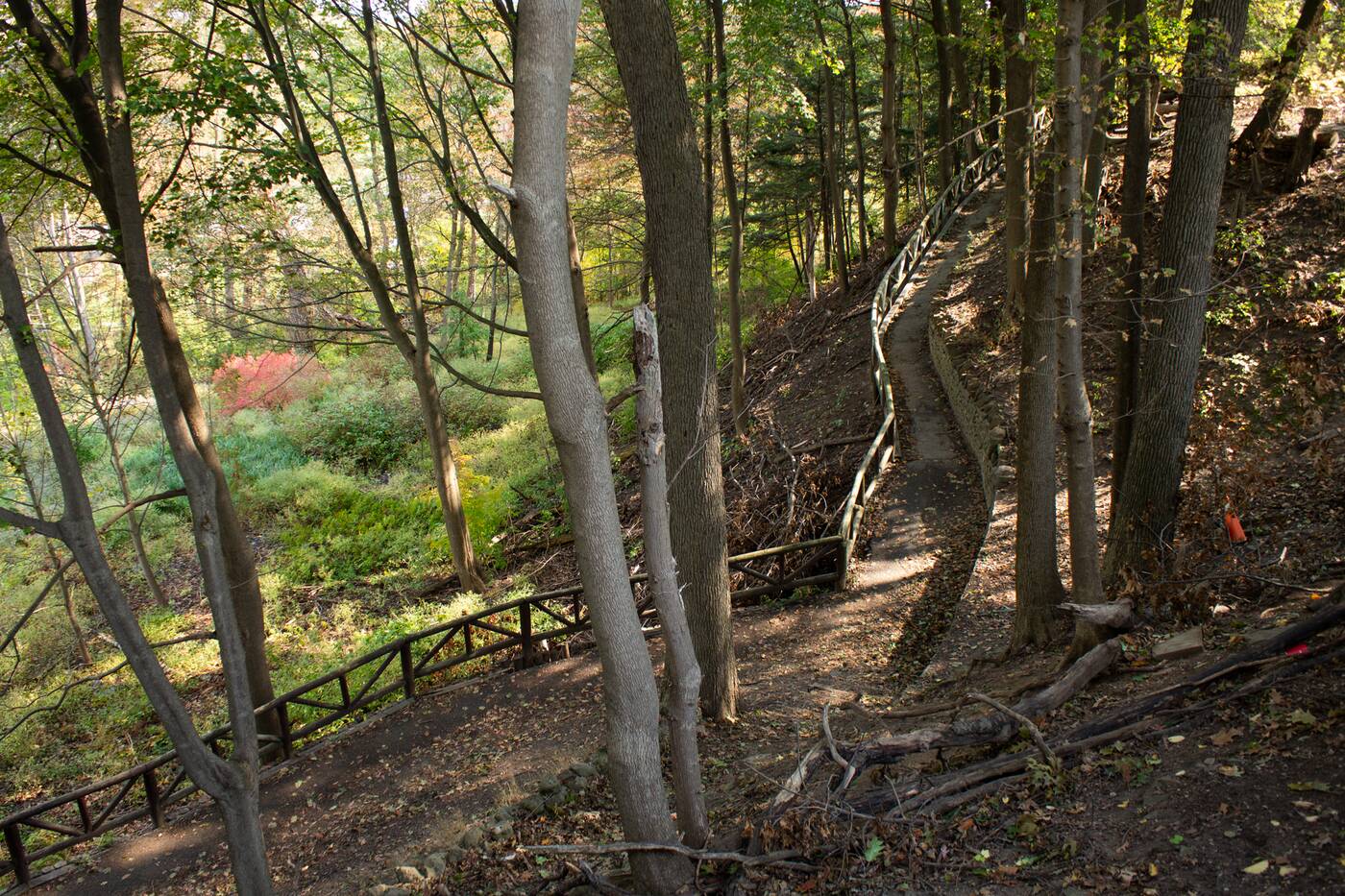 A larger trail leads down from the residential streets above.

It helps that it's connected to the Humber River Recreational Trail, providing pedestrians access to surrounding nature destinations such as Lambton Woods or Scarlett Mills Park to the north and south.

The garden's look changes slightly every year, but what's evergreen is the maintenance that's put into this cared for land on the banks of the Humber. 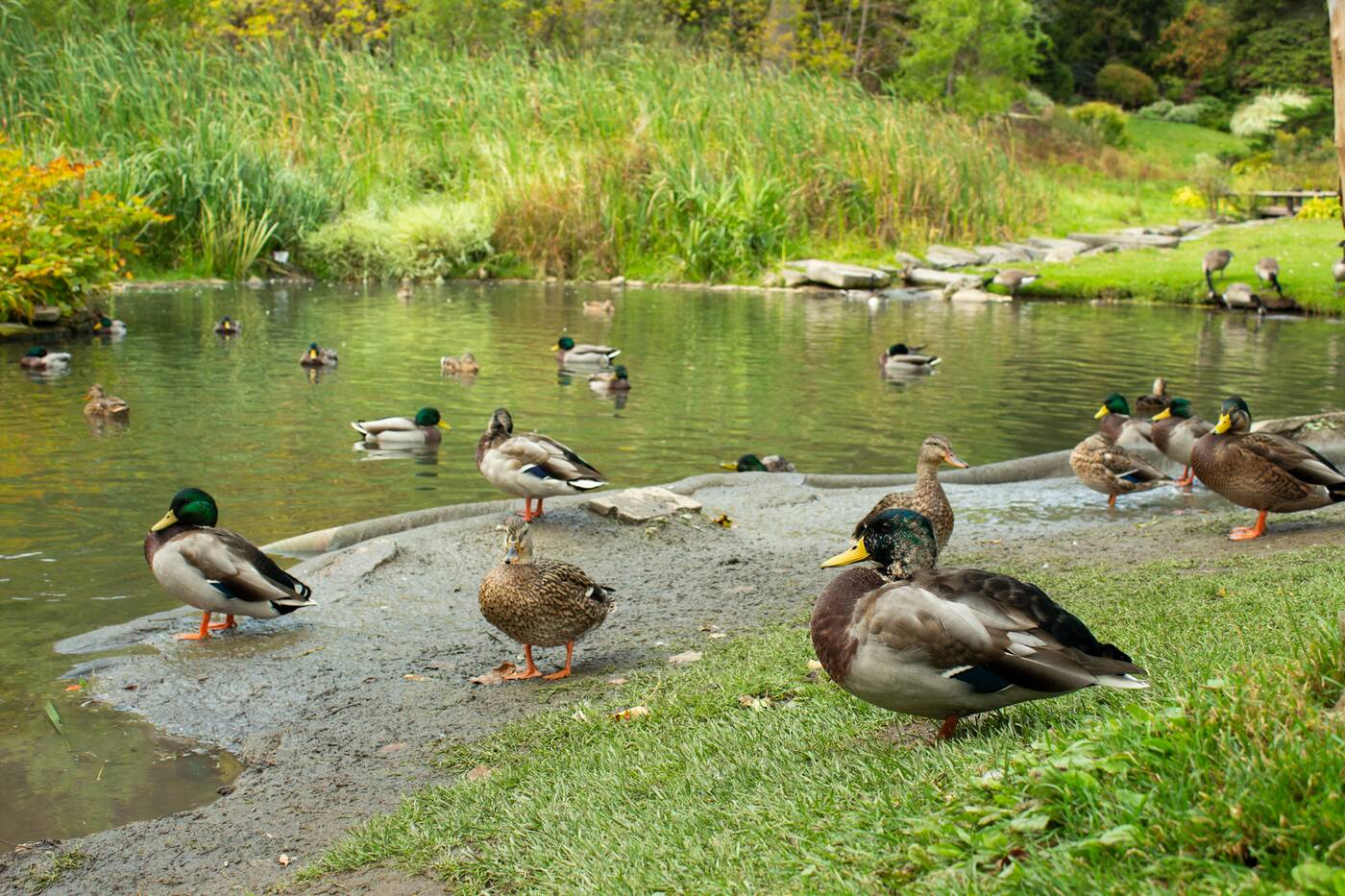