The top 33 Caribbean restaurants in Toronto by neighbourhood 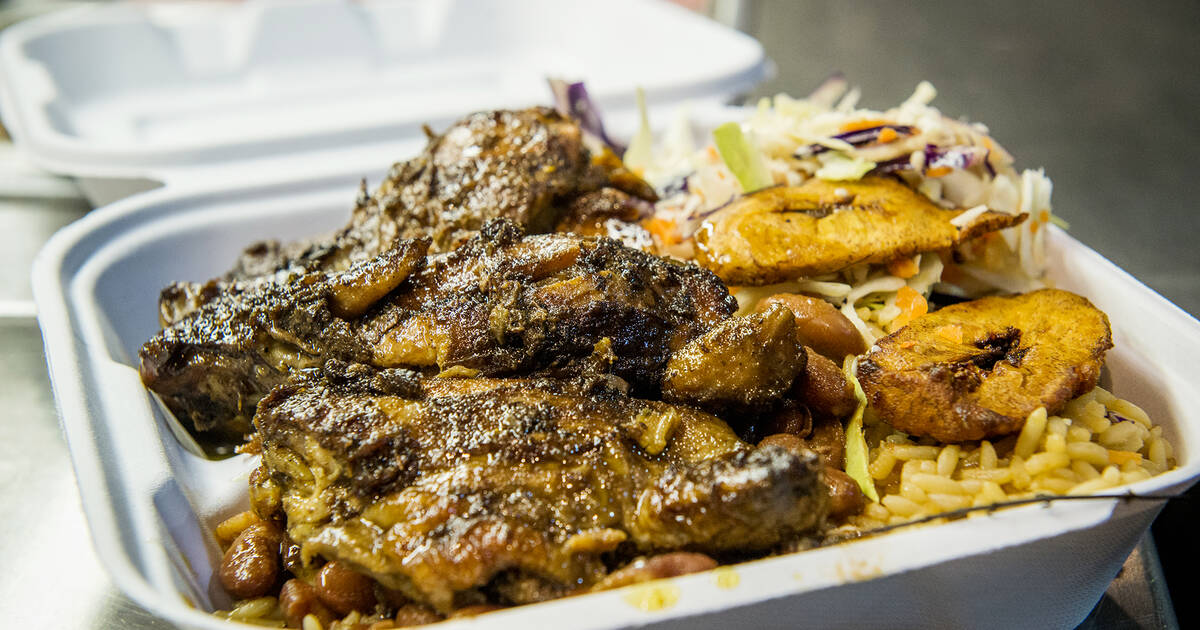 Caribbean restaurants in Toronto are mostly neighbourhood staples serving up orders of jerk, roti and coco bread patties for takeout — peppered with the occasional dine-ins worthy of date night. Wherever you go, prepare to have your Caribbean cravings satisfied.

Here are my picks for the top Caribbean restaurants in Toronto by neighbourhood.

One Love Vegetarian is a meat-free haven just steps from Bathurst station with a menu that features pumpkin-filled roti, chickpeas and a signature corn soup that’s chunky and delicious.

Named after a street in Jamaica, you’ll find large portions of chicken curry roti and oxtail at ScottHill Caribbean Cuisine. It feels a lot more sit-in friendly than other Caribbean spots but you can also order your meals to-go.

There are several locations of Jerk King in the city, but this one near Bloor and Dufferin undoubtedly takes the cake for being the tastiest (and the busiest).

Look no further than these delicious beef-stuffed patties at Caribbean Queen by Georgina, the queen herself. This low-key Bloor Street shops is one of the most quintessential patty spots in the city.

Jerk, BBQ, curry chicken, and doubles (if you can catch them before their sold out) are available at the Tasty's, which sits amidst Chinese restaurants and clothing stores just south of College on Spadina. 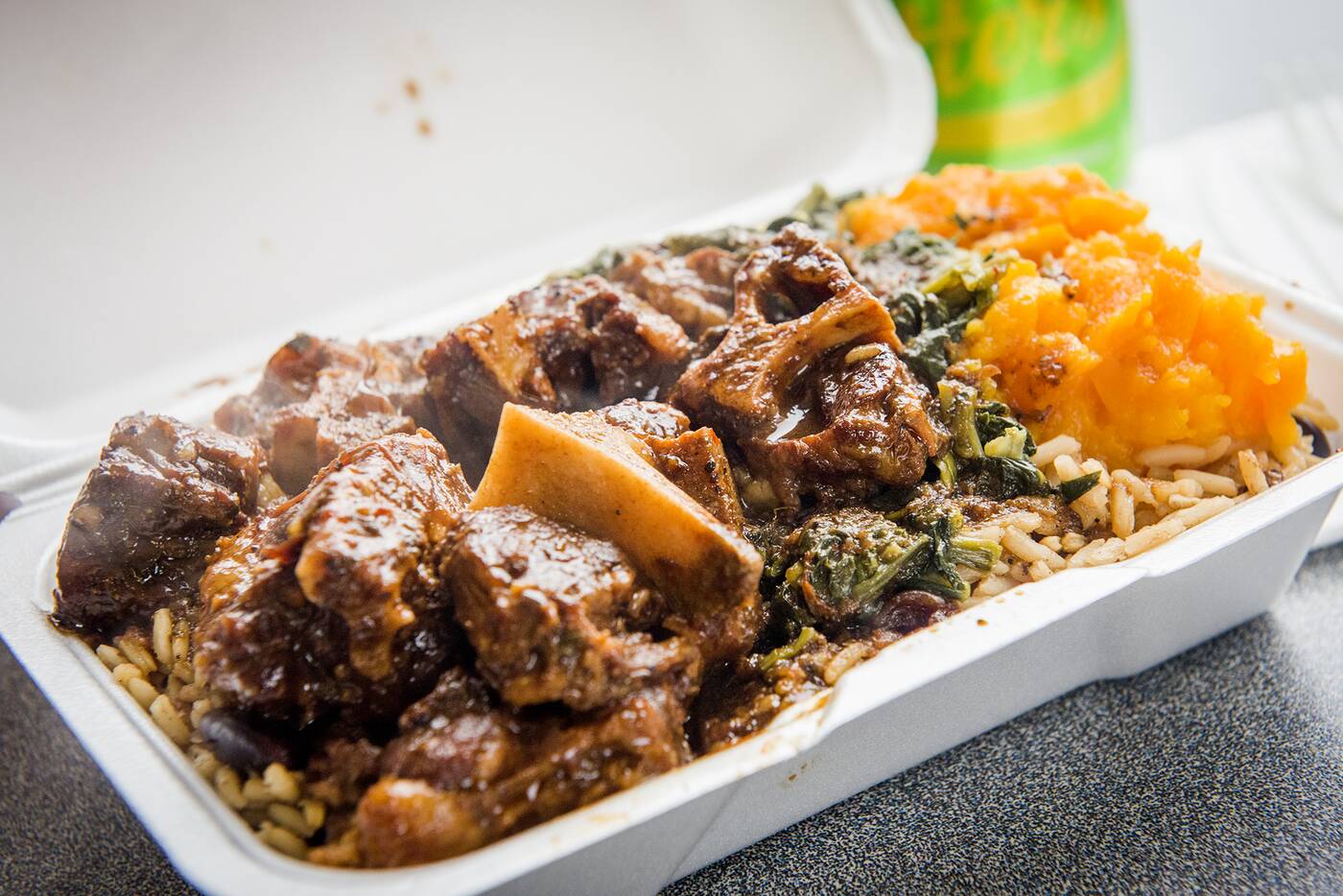 Mona's Roti is a Scarborough staple. Photo by Hector Vasquez.

The Ossington outpost a weed store now, but the original location of the family business Roywoods on Fort York is still dishing out jerk chicken sandwiches and gravy-topped chicken.

Enter the homey interior of St. Clair West's Royal Caribbean Cafe and feast on ackee with saltfish and affordable plates of seafood, festivals, and more.

The three Charles sisters behind SugarKane ran a successful catering company before opening up this Greektown restaurant. Expect Caribbean adn Cajun eats with cocktails made with Ting.

Sharing a space with the Ethiopian mart Shola Vegan is Vegan I Thali, home to Toronto's corn soup king, Kurt Davson. It's a straight up meat-free paradise in here.

The beloved Liberty Village location of Island Foods may be no more, but don't worry: the Don Mills plaza location of the Caribbean restaurant is still alive and kicking. 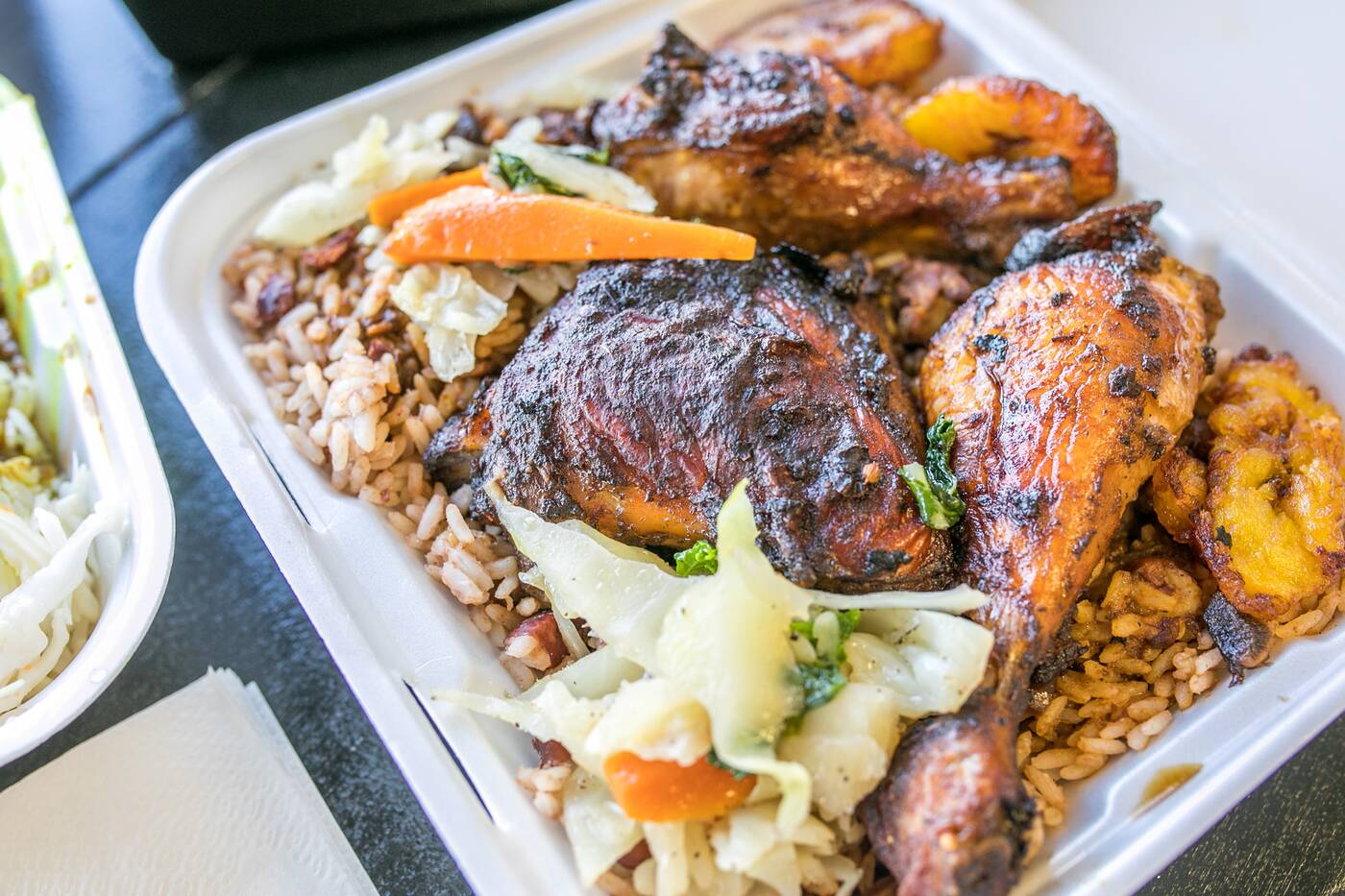 The Palms is all about serving up Jamaican staples in the Stockyards. Photo by Fareen Karim.

It’s all Haitian eats at Rhum Corner, the Caribbean restaurant and bar that serves up small plates, like banana frites, with some unique cocktails.

Roti Roti has been serving Trini, family-style eats for over 25 years. Stuff yourself with roti and BOGO doubles on Mondays made by the Ramsawak family.

If you’ve never had jerk chicken mac n’ cheese, it’s time to hit up Taste Seduction. This little strip mall spot also does jerk chicken tacos and puts a twist on shrimp fettuccine by adding jerk pesto to it.

It doesn't look like much from the outside, but the long-running Irie Veggie on Eg West is a go-to spot for delicious Ital dishes like rice and peas with tofu or porridge takeout.

While Kensington has no shortage of delicious eats, Rasta Pasta’s summertime outdoor drum brings the lines. Grab a box of gnocchi with salt fish and ackee for a medley of Italian and Caribbean faves. 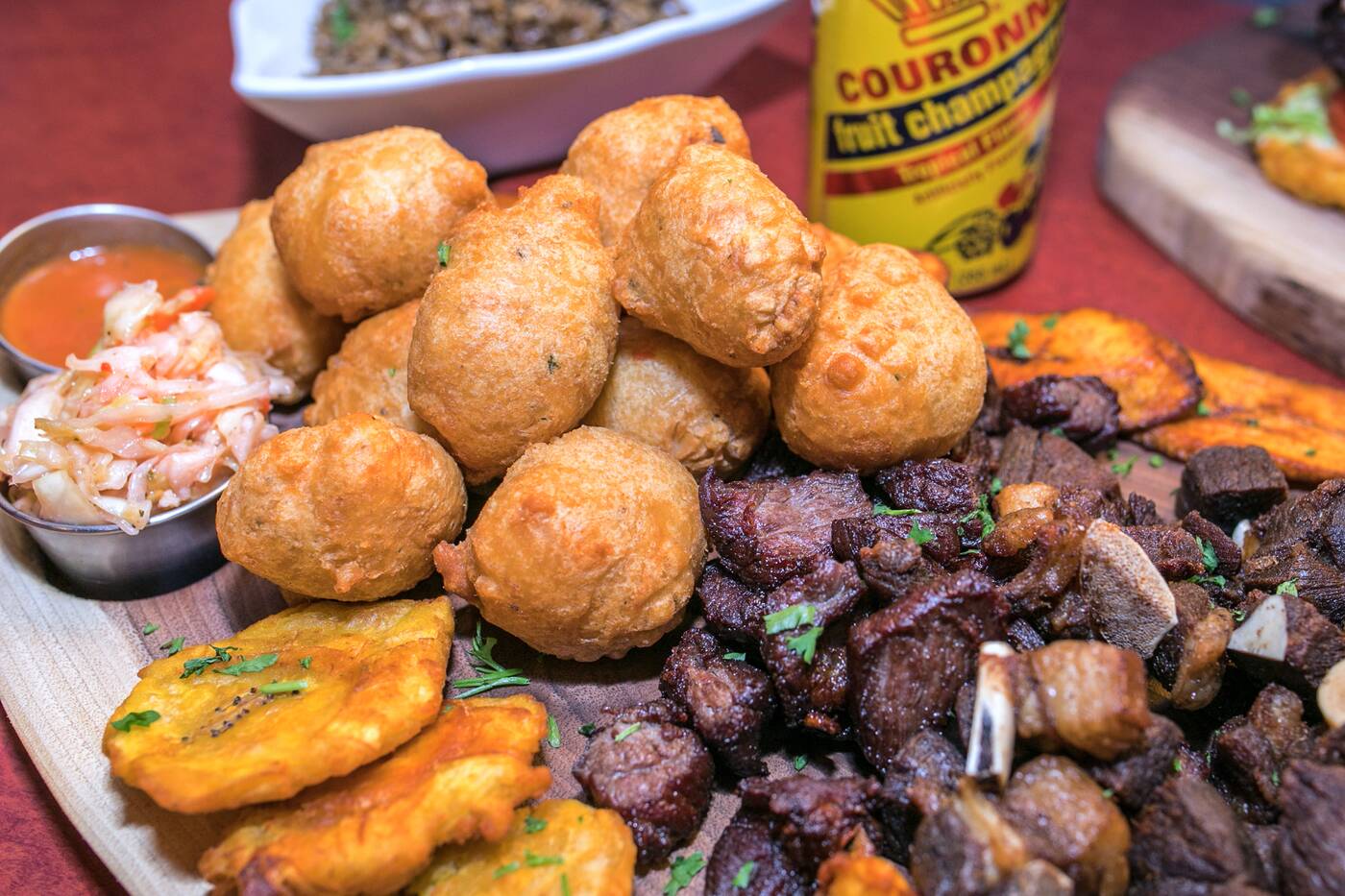 Boukan is bringing platters of Haitian fritay to the Upper Beaches. Photo by Hector Vasquez.

One of the few dine-in spots on the list — though it’s still comfortably casual — Chubby’s has a an elevated menu of “likkle bites,” brought to you by the same people behind Gusto 101 across the street.

Tropical Joe's might look like a regular ol’ food court counter, but this Gerrard Square gem serves up surprisingly tasty dishes. A rare item worth trying: the jerk chicken poutine.

Umi's Kitchen on Dundas East specializes in red pea soup, jerk chicken, oxtail, and more. Aside from the fact that their specials are incredibly affordable, everything at Umi is also halal.

Sitting in an Islington strip plaza packed with small businesses is Peppers Caribbean Restaurant. It's the usual West Indian favourites here, like callaloo, ackee, and mackerel with banana. 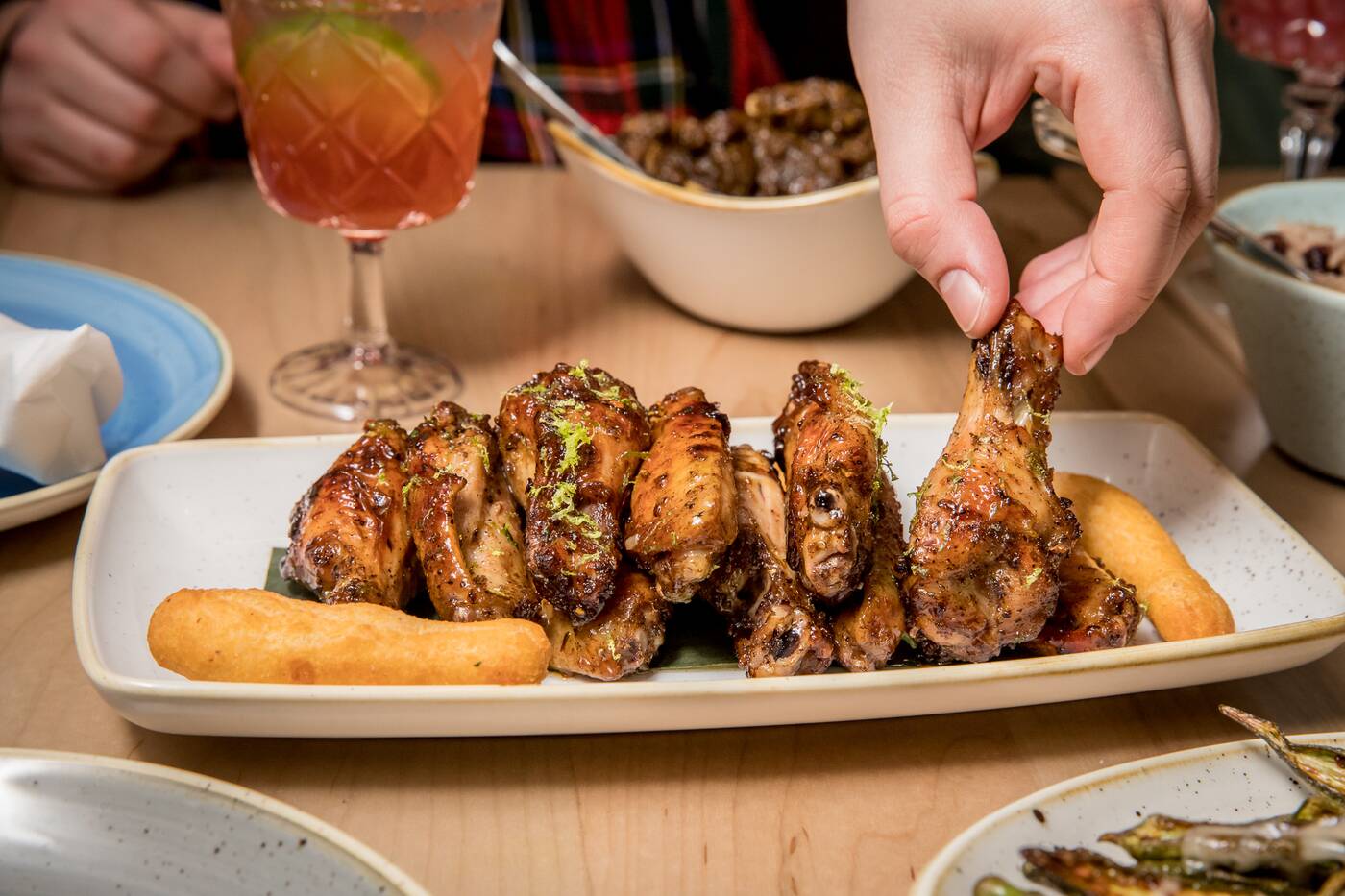 The lunch specials at Judy’s Island Grill are stellar. This Little Jamaica stalwart specializes huge portions of the usual go-tos like jerk chicken, rice and peas, and tripe gravy.

It's all about Jamaican home cooking at Steady's. Specialties include oxtail and curried goat. Look out for this tiny restaurant with the jerk drum out front.

Ali's West Indian Roti Shop is, as the name suggests, the spot for roti. If you're looking for other Trini and Caribbean staples, Ali's menu also runs the gamut from pholourie to chow mein with fried chicken legs.

This Queen Street location of Allwyn's Bakery marks the Toronto-born brand's fourth location. Don't miss out on the jerk chicken, but especially don't miss out on that chicken stuffed between two soft Fahmee patties.

You can grab Trini classics and twists on favourites at Jerk Paradise, a tiny boîte co-owned by ex-Harlem Underground chef Kuganathan Kulanthaivelu. Chicken roti, jerk burgers and their famous island-style chicken and waffles are all on the menu here. 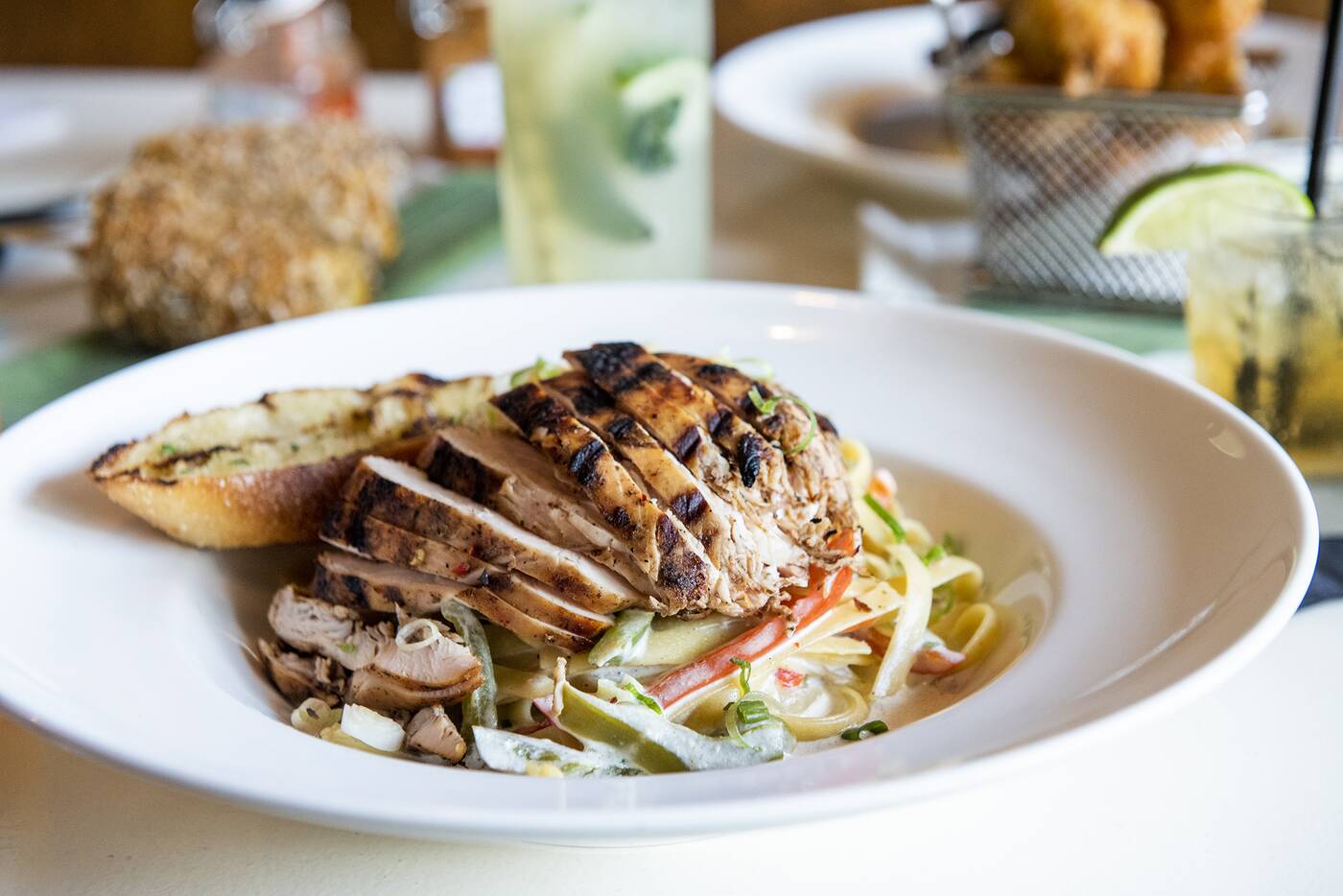 SugarKane is a spot for beautifully-plated Caribbean and Cajun eats. Photo by Hector Vasquez.

Sitting far from the main drag of Roncy is T Dot Jerk. This takeout spot serves up pretty generous portions of jerk chicken and pork served on rice.

Serving one of the best — if not the best — roti in the city, Mona’s Roti on Sheppard East is known far and wide for their fluffy creations. They’ve also got tamarind balls, plantain chips and other essential snacks for sale.

The fact that Albert’s Real Jamaican is open until 2:30 a.m. on Fridays and Saturdays makes it an instant classic. This longtime restaurant sells roti, curry and has soup specials every day of the week.

No one does jerk pork better than Mr. Jerk. This cash-only spot has been a hotspot for years. If you can’t handle the heat, stay away from their house-made hot sauces.

It's strictly Jamaican eats at The Palms Jerk & Grill. The spicy mango sauce is a sweet, surefire way to break a sweat with your boxes of jerk chicken or curry. 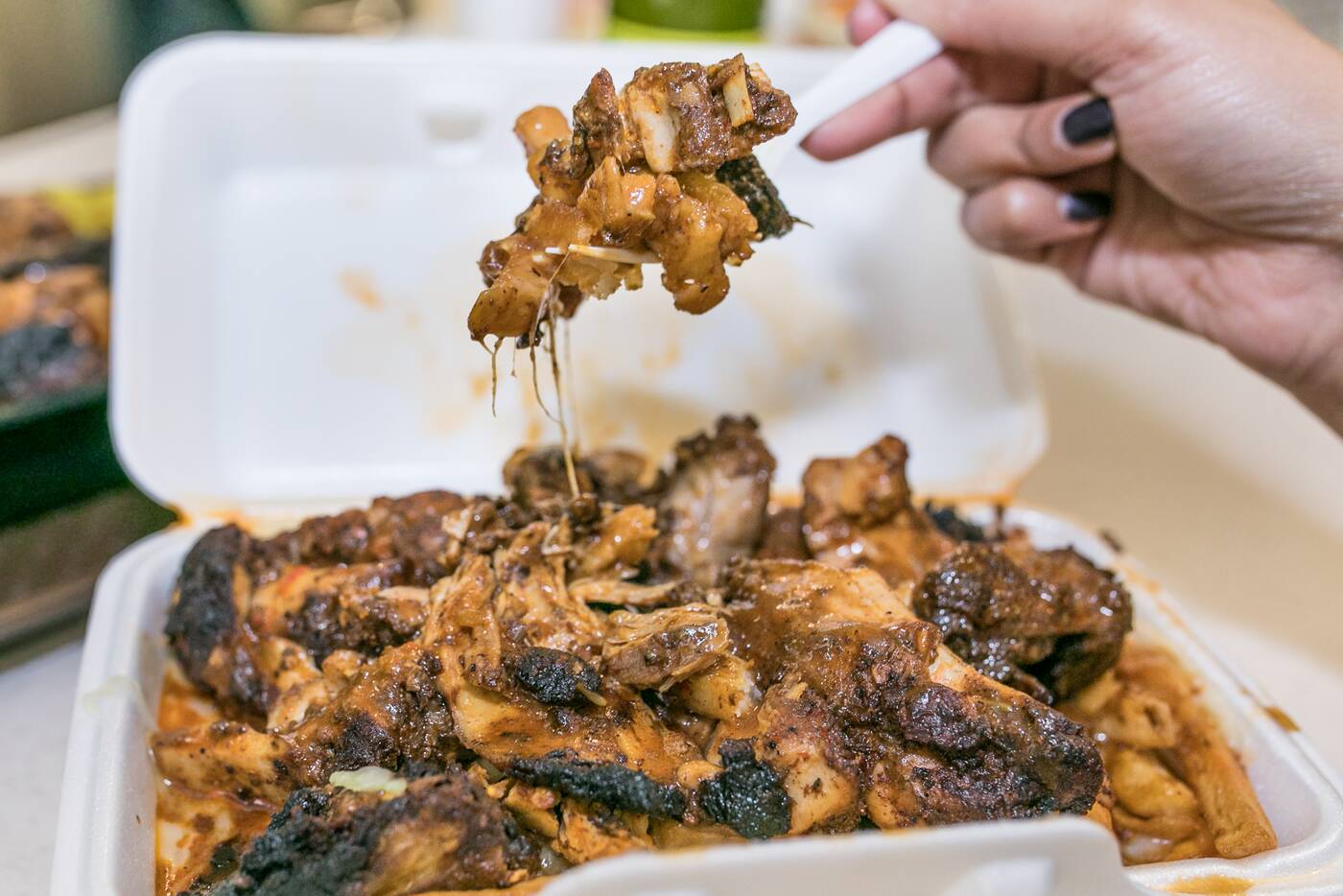 Ooey gooey jerk chicken poutine is on the menu at Tropical Joe's. Photo by Fareen Karim.

Boukan is one of the newer Caribbean arrivals to Kingston Road, but it proudly reps a far less popular island cuisine: Haitian food. Prepare to nap after massive platters of fritay and dishes with djon djon.

King's Delight has been serving jerk chicken and fry fish on Jane Street for years. They're incredibly affordable, with killer daily student deals.

The food truck-turned brick and mortar Randy’s Roti offers their popular doubles and roti, plus a mouthwatering bake and shark, all just steps away from the Reference Library.

Sitting right on the busy stretch across from the Eaton Centre, Ritz is the ideal lunch getaway from the hustle and bustle outside. Lunch specials like jerk chicken are pretty affordable and lines are bearable enough for the YDS area.