Everything to know about Toronto's new bus-only traffic lanes 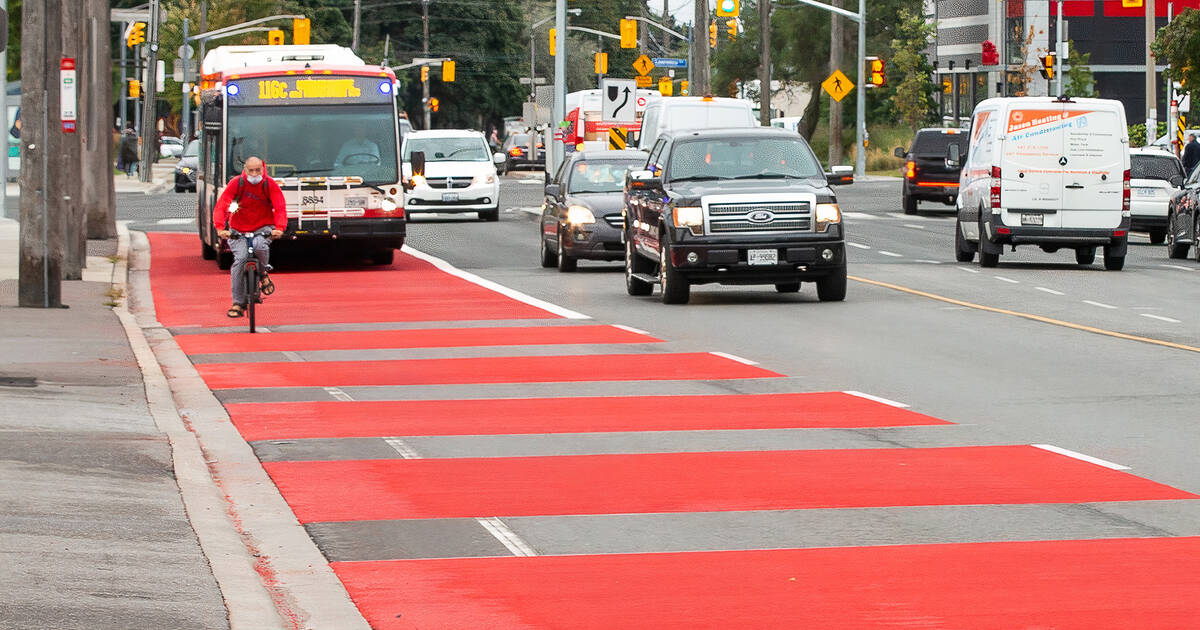 Residents in Toronto are starting to notice the eye-catching red paint and signage that indicates the TTC's new dedicated bus lanes, which are coming into full use on multiple city roads in a matter of days.

The RapidTO project, which has been in the works for months now, is intended to help speed up service and improve pesky traffic on some of the TTC's busiest routes, including along portions of Eglinton Avenue East,  Jane Street, Dufferin Street, Steeles Avenue and Finch Avenue.

It will also help to reduce crowding on vehicles, which has been a huge ongoing concern amid the health crisis, and has the added side effect of — along with new bike routes, road closures prioritizing pedestrians and cyclists, and streetside patios — making the city feel more forward-thinking, like many European capitals.

The first of the new bus lanes are set to be put into use on Oct. 11 thanks to work being expedited over the summer, and run between the University of Toronto Scarborough Campus and Brimley Road on existing HOV lanes and curbside general-purpose lanes.

They will later span a full 10.9 km to Kennedy Subway Station, running through 21 stops total; though, notably, 24 of the least-busy stops that currently exist along the corridor are being cut for speed and to "mimic the future Eglinton East LRT stops."

Such an important step to getting the City moving again in the COVID world! Excited to see these further expanded to cover our most popular bus routes.

Hopefully, the "public realm improvements" planned for those stops will help make up for it.

The major bus routes that will hopefully be seeing quicker service and less crowding as soon as Sunday are the 86 Scarborough, 116 Morningside, 905 Eglinton East Express, and 986 Scarborough Express, on which travel time is expected to be cut down by up to 16.5 per cent or five minutes per trip, even without more buses being sent out.

Pre-COVID, approximately 47,000 people used these routes every single weekday, and ridership has remained higher than in other parts of the city due to the fact that many locals in the area are essential workers.

These routes are in addition to all buses that run on the following streets, where bus-only lanes will eventually be installed for 24/7 use over the coming months:

Though drivers will find themselves with one less lane to utilize, cyclists will be permitted to use the new bus lanes as their own, and the TTC assures residents that parking and usual traffic flow will not be significantly impacted.

by Becky Robertson via blogTO
Posted by Arun Augustin at 7:51 AM