Metrolinx unveils further plans for the Ontario Line in Toronto 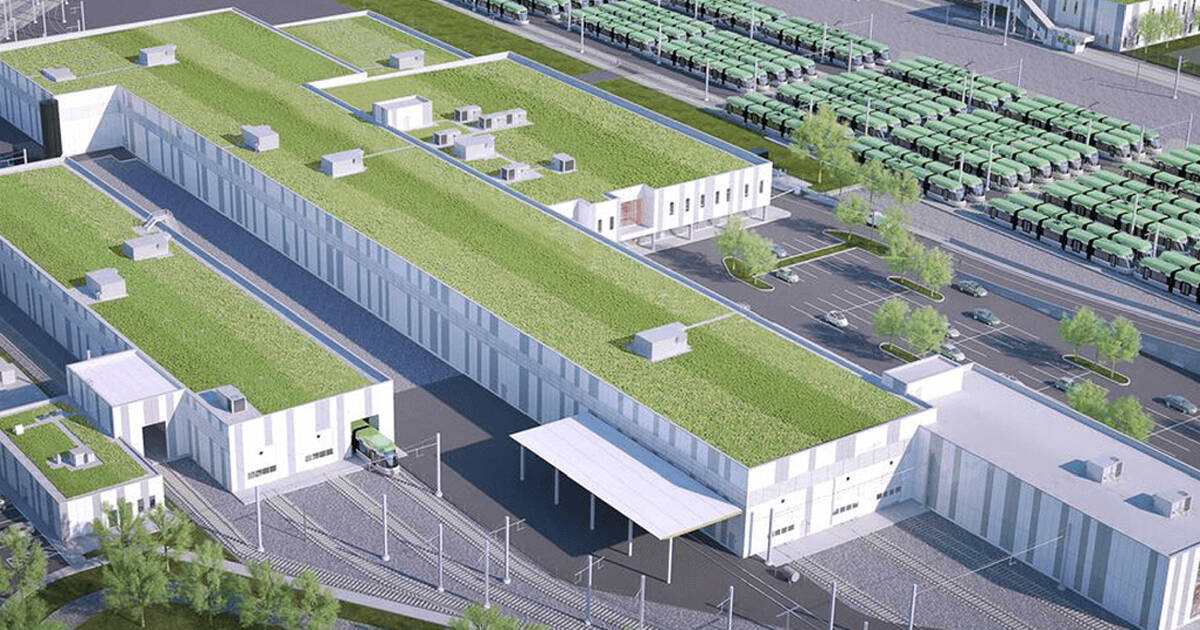 As promised, Metrolinx just released its fourth and final installment of what we can expect, at the neighbourhood level, from the Ford government's forthcoming Ontario Line subway expansion.

This time around, the provincial transit agency focused on the 15.5-kilometre line's final quarter — the part that runs from the TTC's Pape Station all the way up to the Ontario Science Centre.

"The northern portion of the Ontario Line will offer connections to both the Line 2 subway and the Eglinton Crosstown LRT, along with many bus routes in between," reads the freshly-published North Segment Neighbourhood Update.

Commute times will be reduced quite a bit, in fact, if the Metrolinx estimates are correct: a trip from Thorncliffe Park to King and Bay would be cut down from the current 42 minutes to just 26 minutes.

The northern portion of the Ontario Line will run from Pape and Danforth all the way to the Ontario Science Centre. Image via Metrolinx.

The addition of this new subway line to Toronto's existing transit network is also expected to reduce congestion across the TTC subway system.

"The connection at Line 2's Pape Station will intercept westbound riders bound for the busy Bloor-Yonge interchange, where many of them currently connect with Line 1 to get to and from the downtown core," explains Metrolinx.

"This, in turn, will result in a 22 per cent reduction in crowding on Line 2's busiest stretch."

Metrolinx further predicts that the Ontario Line will reduce crowding at Eglinton Station by 17 per cent "compared to only three per cent for the previous, shorter Relief Line South proposal."

Designs for the northern portion of the track have been changed a bit since initially proposed to both accommodate existing structures and minimize the impacts of construction on local homes and businesses.

The connection at Pape Station, for instance, has been brought out of the street and now straddles Line 2, making for fewer traffic problems as it's being built, and a smoother transfer for customers once the line is complete. 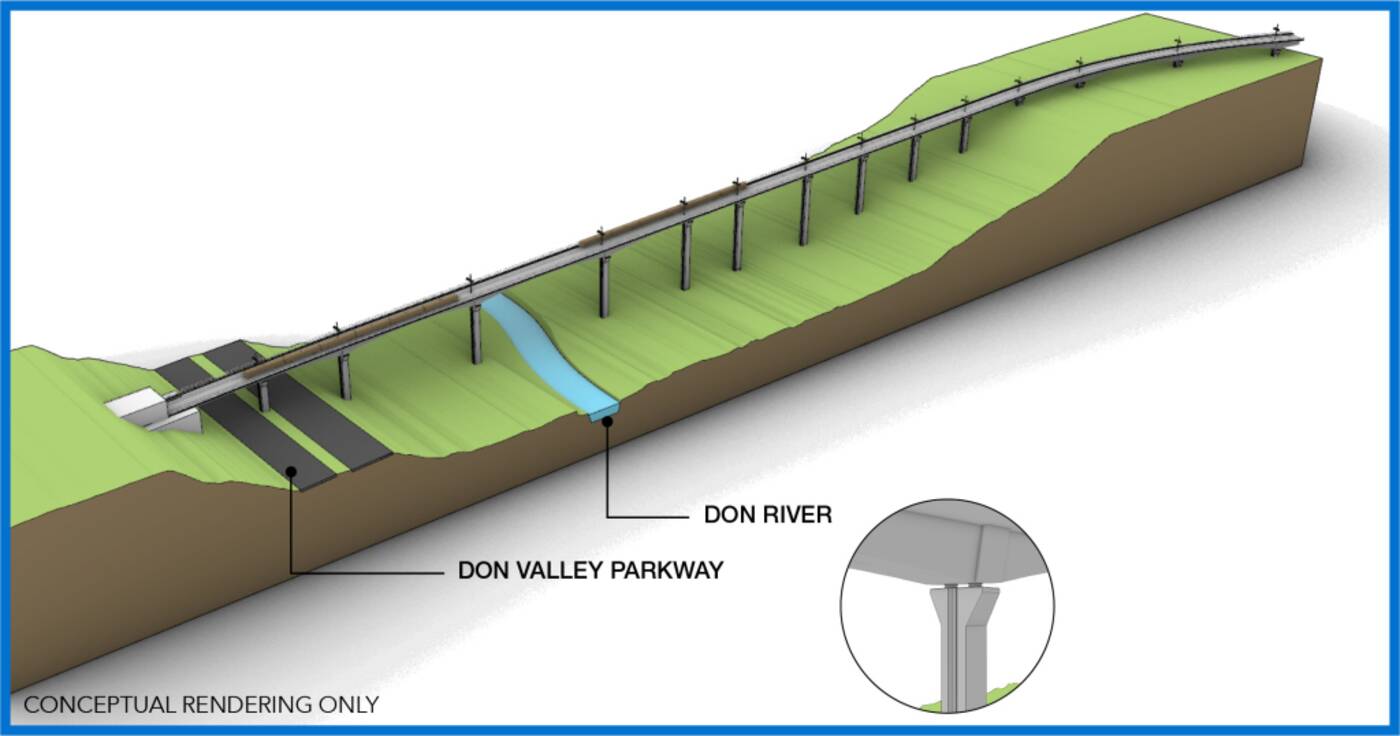 Metrolinx promises that modern bridge construction techniques will be used to build a structure with minimal environmental impacts. Image via Metrolinx.

Heading north from there, the underground section will emerge from the southern embankment of the Don Valley on "an elevated structure" that will connect it to Thorncliffe Park.

"We are sensitive to the communities we are serving and we're working on making the elevated guideways, slender and as few visual distractions as possible," said Metrolinx designer John Potter of how the agency plans to build the bridge and surrounding infrastructure.

After Thorncliffe Park, the tracks will run adjacent to a nearby hydro corridor toward Flemingdon Park. This is a significant departure from previous plans that had the track running along Overlea Boulevard.

Thanks to the change, Valley Park Middle School and its adjoining cricket patch will be saved.

"It will also reduce the construction inconveniences around several houses of worship that front onto Overlea Boulevard east of Thorncliffe Park Drive," notes Metrolinx on its blog. 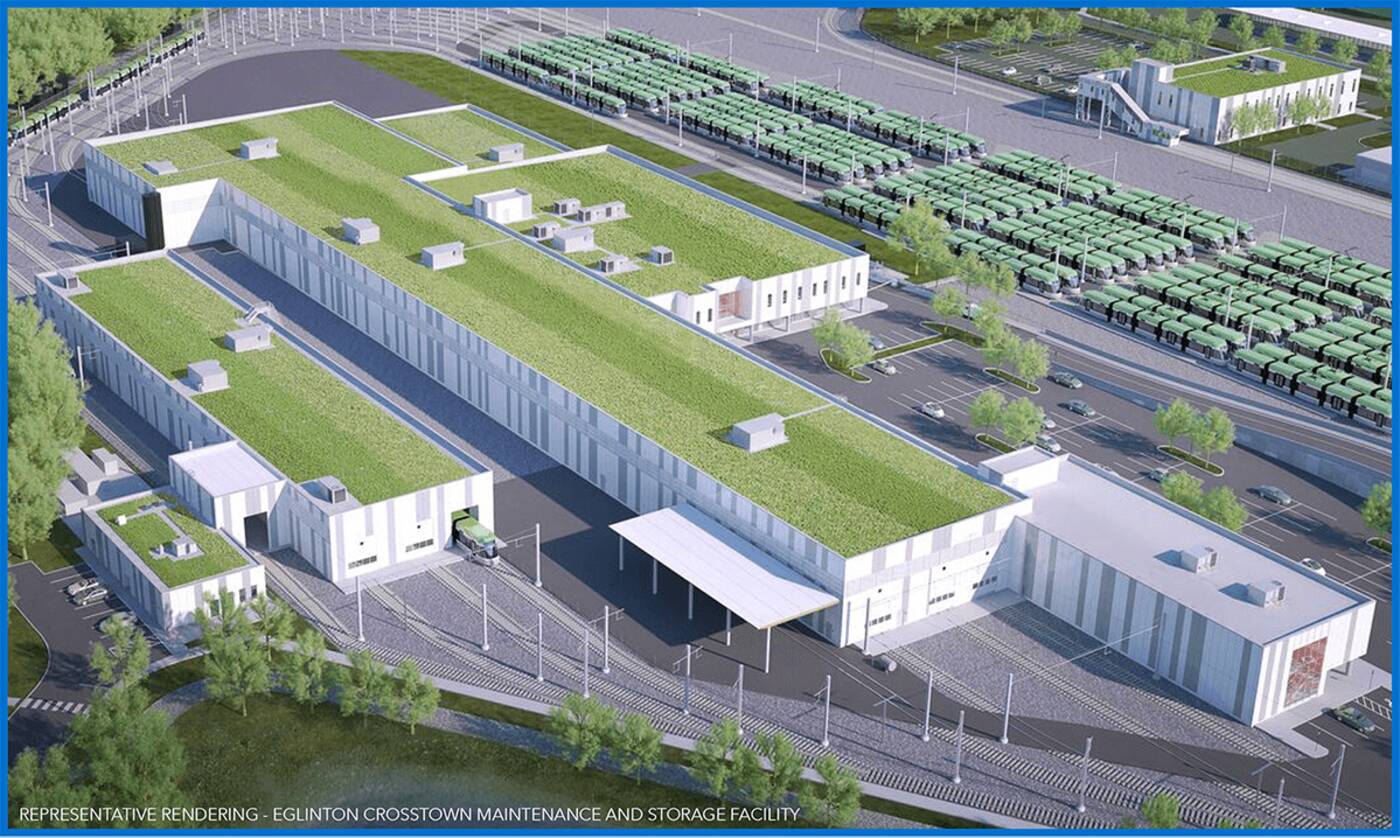 Metrolinx is currently exploring sites along the northern portion of the line to determine where it might be able to build a new storage and maintenance facility. Image via Metrolinx.

Still, while the new plans do spare some previously-targeted properties, the agency says "other properties will need to be acquired," most significantly for the purpose of a new maintenance and storage facility that will eventually house some 250 trains.

"Metrolinx will work with property owners and tenants to help with relocation and transition efforts," says the agency.

Fortunately, there's still plenty of time to figure out which properties will be needed for the project, and what can be done to compensate those who must move to accommodate it.

The $11 billion Ontario Line, billed as line the largest single subway expansion project in Toronto's history, won't be in place until at least 2027 — and that's only if we're lucky.

History has taught us that Toronto transit infrastructure builds, like most construction projects, usually take longer than estimated.