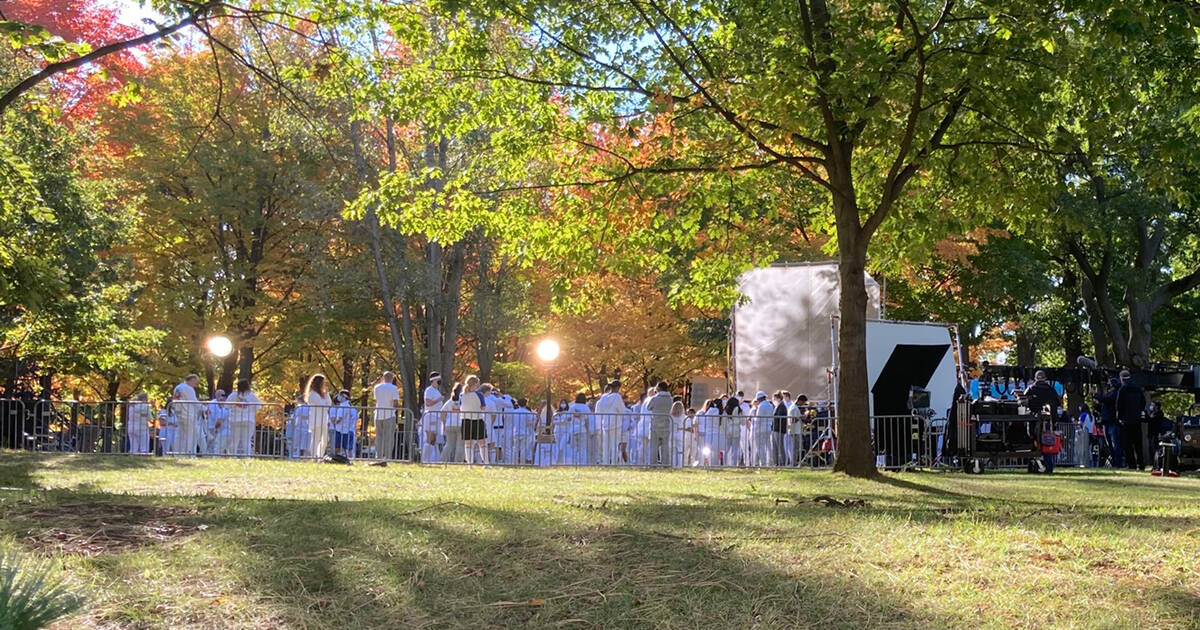 A large movie production in Toronto left some people wondering why they had to stay away from family for Thanksgiving weekend but a large group could gather for the filming.

The production for a Disney movie called Spin went ahead as concerns of the spread of COVID-19 mounted this week. The movie is scheduled to film from Oct. 5 to Nov. 20 in Toronto with at least some of the filming happening in the north end of High Park.

Some kind of event at High Park this morning. School busses, rental trucks, food trucks, tents, portable stage. Few masks, no distancing, and on a weekend when we're told social gatherings are so dangerous even a small family dinner can't be allowed. pic.twitter.com/0qDlPE7UaN

The crowds of people gathered had some wondering about social distancing measures.

@CBCToronto @torontolife @cityoftoronto @CityNews @fordnation HOW IS THIS SUPERSPREADER EVENT ALLOWED TO HAPPEN IN HIGH PARK???????

I can’t hug my parents pic.twitter.com/eRZQx0gYfe

Another person wrote blogTO noting how confused they were over the film sets they had seen first-hand.

"Guess what is happening on film sets in Toronto? Approx. 150 kids, teenagers and adults are unmasked and dancing elbow to elbow with each other, even exchanging hugs," they wrote.

A City of Toronto spokesperson explained that prior to the reopening of production, unions involved in film production, along with producers associations and levels of government, negotiated health and safety protocols, called Section 21, to protect their members.

"These protocols have been approved by the Ministry of Labour, and they set very high guidelines for on-set safety. These applied to the shoot in High Park," the city spokesperson said. "The public is not involved as they are not permitted access to film-related workplaces."

All people involved in filming follow health and safety mandates, a Disney Channel spokesperson told blogTO in an email.

"As we begin filming series and movies that employ several hundred people in Toronto and Vancouver, we have diligently prepared to provide a safe work environment, including when filming takes place in public spaces that are temporarily inaccessible to the general public," the spokesperson wrote.

"We require that our production partners, crew and all cast members adhere to local laws including a two-week quarantine for some cast. They must also adhere to each production’s frequent Covid-19 testing, wear protective equipment and social-distance while on the set and not filming a scene," the statement continued.

"We are especially appreciative of the Canadian public for their cooperation while our movies and series film in public spaces."

But not everyone was upset to see the film crews rolling.

Filming is scheduled to resume on Tuesday, the Disney Channel spokesperson said.

by Karen Longwell via blogTO
Posted by Arun Augustin at 9:48 AM