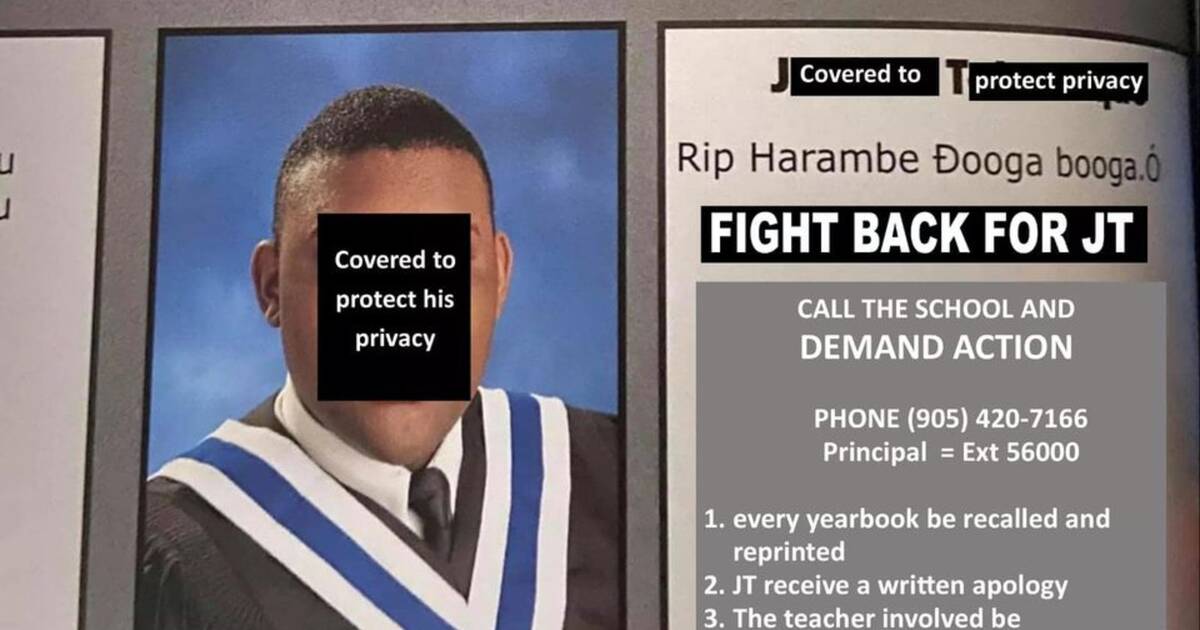 The Durham Catholic District School Board has launched an official investigation with the local police after a student's intended yearbook bio was replaced with a blatantly racist message and distributed to the entire student body.

Joshua Telemaque is a student at St. Mary Catholic Secondary School in Pickering, and he intended to honour his late grandmother in his yearbook message by writing "RIP Grandma. Thank you for guiding me through my four years of high school."

But instead of this heartfelt message being printed next to his name and photo, a racist message about Harambe, the gorilla that was shot and killed at the Cincinnati Zoo, was written in its place.

Amplify this. St Mary’s catholic school in Pickering, ON https://t.co/ibfcpMANXX

"Folks, racism is alive in Canada. This morning I received a frantic call from my sister, who was very distraught about how my nephew, Joshua, was portrayed in his high school yearbook," wrote Mayma Raphael, Telemaque's aunt, in a Facebook post this past weekend along with a photo of the yearbook page.

"Even though he has never caused any school issues or had any disciplinary actions against him, a star athlete at the school, excelling in football, basketball, and track and field — all this didn't shield him from racism's emotional and psychological impact."

Raphael's post was immediately met with widespread outrage and disgust, and the high school's principal, Susan Duane, issued a letter in response soon after.

I'm at a loss of words to describe how f@#&%$! pissed I am that this happened & that there are ppl out there spreading so much hate. Disciplinary action needs to be taken by @DurhamDSB & @DRPS. I stand with you #joshuatelemaque. ❤ https://t.co/3OisfzEwCA

In her letter, Duane referred to the comments as "malicious, hurtful and racist in nature," and said they "sincerely apologize to the school community for the offensive, hurtful and unacceptable nature of these comments."

Duane also said they've launched a formal investigation in collaboration with the Durham Regional Police, and that any students found to have participated in such a racist act will be subject to disciplinary action according to the Ontario Schools Code of Conduct and/or applicable policies of the Durham Catholic District School Board.

First and foremost, she said, the school is asking all students to return their yearbooks directly to the school's office today, on Oct. 13, and she added that a full inventory will be completed to ensure every copy is accounted for.

DCDSB extends deepest apologies to all individuals who have been impacted by the hurtful, malicious and racist comments that were published in the 2019-2020 St. Mary Catholic Secondary School yearbook. Read DCDSB's complete statement to the community: https://t.co/vOFvkhvzE9

Meanwhile, another statement issued by the director of education for the Durham Catholic District School Board, Tracy Barill, says the board will "work with the school not only to ensure that the incident is fully investigated but also to support students and the community in rectifying the harm that has been done."

But in a press conference this past weekend, Telemaque said he was shocked and devastated following the incident, adding that he was holding back years and felt deeply hurt.

Targeted racism stays with the victim FOREVER. It is impossible to describe what it is like, to someone who has never experienced it.

"He's now devastated, embarrassed, hurt, and disappointed. Since this was his final year at the school, he was really looking forward to his yearbook. Now his memory of his time at the school is forever ruined. How can something like this happen?" continued Raphael in her post.

"This cruel act echoes the many incidences of racism that many Black Canadian kids experience throughout their time in the education system. The school needs to take action to get this situation fixed. Our kids are suffering way too much."

As Telemaque's story continues to circulate on social media and beyond, one Good Samaritan has created a GoFundMe campaign to raise money to help pay for his post-secondary education.

Organizer Martin Buckingham wrote that it's Telemaque's dream to play football in university, and he started the fundraiser to allow the student's supporters to help him acheive that goal.

"Joshua Telemaque was the victim of a cruel joke that was published in his schools annual yearbook.  The story of the racist event has gone world-wide on Facebook and Joshua has recieved support form thousands of peopel in Canada, the US, Europe, and the Caribbean," reads the campaign description.

"The purpose of this GoFundMe is to allow those supporters contribute to Joshua's post secondary education."