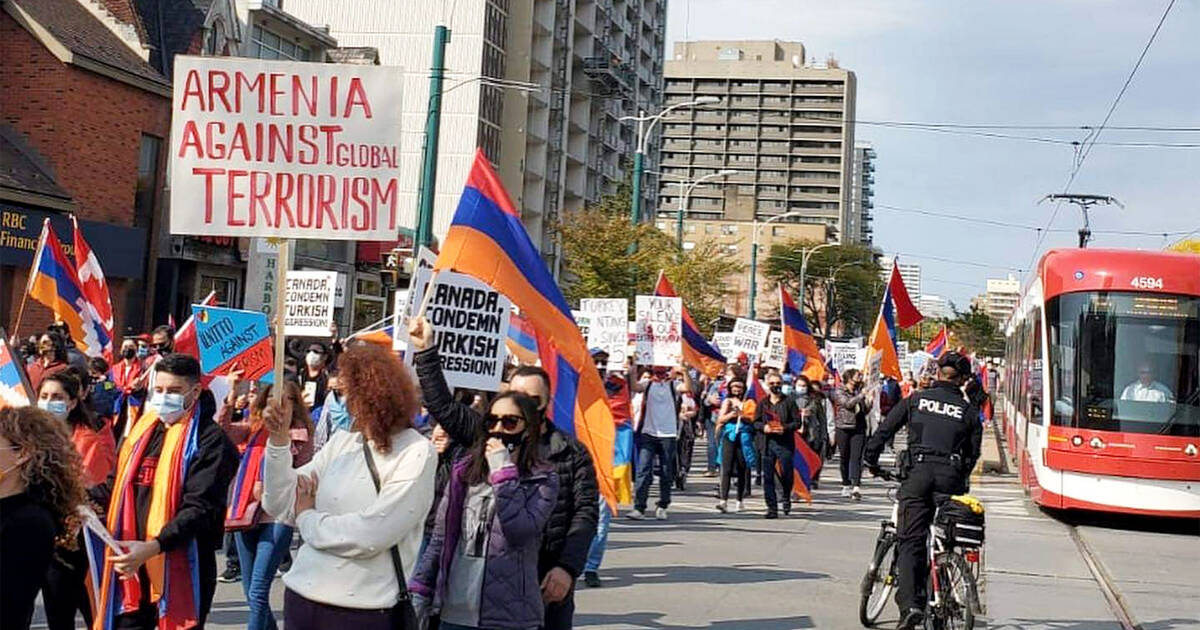 Toronto's Armenian community is demonstrating and speaking out in light of the ongoing conflict between Armenia and Azerbaijan, and they're demanding that the federal government take swift action against Turkey's alleged involvement in the violence.

Protestors marched through Toronto last Friday to show support and solidarity for those suffering in Armenia and Artsakh, and they called on the government to condemn the military agression that has been ongoing for several weeks now.

Scenes from a protest taking place in #Toronto to urge the Canadian government to condemn the Azeri and Turkish aggression against the Armenian people of Artsakh.

For the past week they have been shelling Armenian schools and hospitals resulting in civilian deaths. #Armenia pic.twitter.com/fLAYi15ylC

A years-long conflict over the enclave of Nagorno-Karabakh, which is a self-proclaimed South Caucasion state situated within Azerbaijan but is home to ethnic Armenians, erupted into intense violence reminiscent of the Armenian Genocide of 1915 at the end of September.

The Armenian-backed Republic of Artsakh has been controlling the area since 1994 despite its location within Azerbaijan, though Artsakh's government is not recognized internationally.

According to The New York Times, the recent violence in the region is "the worst fighting the area had seen since a vicious ethnic war in the 1990s," and Armenian officials say Turkey is helping their ethnic Turkic ally Azerbaijan by sending arms, Syrian mercenaries and escalating the violence.

Moments ago on Spadina and Bloor, in Toronto. pic.twitter.com/1RQiQNnHMu

Roughly 75,000 Armenians have been displaced as a result of the conflict, and countless soldiers and civilians have been killed following the shelling of Armenian schools and hospitals in recent days — including Toronto-native Krisdapor Artin who died while fighting for Armenia earlier this month.

As a result, the Armenian disapora, including in Toronto, has been speaking out all over the world in an effort to urge foreign powers to get involved and help put a stop to the violence and agression.

On Oct. 6, Canada's minister of foreign affairs, François-Phillippe Champagne, issued a joint statement with the U.K. foreign secretary stating the "urgent need to end the continuing military action in and around the Nagorno-Karabakh conflict zone."

And in the previous day, Champagne also said Canada had halted its exports of a drone-targeting sensor, which are made in Ontario, to Turkey amid allegations that they're being used by Azeri forces.

The Canadian government has shown support for Armenia and Artsakh and it is no doubt due to displays of solidarity like this one from Armenians in Toronto. #ArtsakhStrong #ՀԱՂԹԵԼՈՒԵՆՔ #PeaceforArmenia #imagesofsolidarity

Some have said this isn't enough, however, and are also calling on the federal government to demand that Turkey stay out of the conflict, or vouch for the country's removal from NATO.

Azerbaijan and Turkey are targeting civilian areas. Where is @NATO, @UN???? @FP_Champagne is this enough proof for Canada that @RTErdogan and @presidentaz are the aggressors in this situation, or would you like to see another Armenian genocide happen before Canada takes action??? https://t.co/tYYZgVH5iN

"I am a strong supporter of Toronto's Armenian community and understand the pain and sorrow that this ongoing violence is causing the community," he said.

"I strongly support the federal government's decision to suspend the exports of military drones. I know they are committed to doing all that they can to help stabilize the situation and move towards peace," he continued.

"I condemn any form of terrorism or the use of military technology in this conflict and join the many calls that have been made thus far in encouraging a negotiated peace resolution, a ceasefire and protection of civilians in this region."