Frozen commuters are raging out over transit delays in Toronto 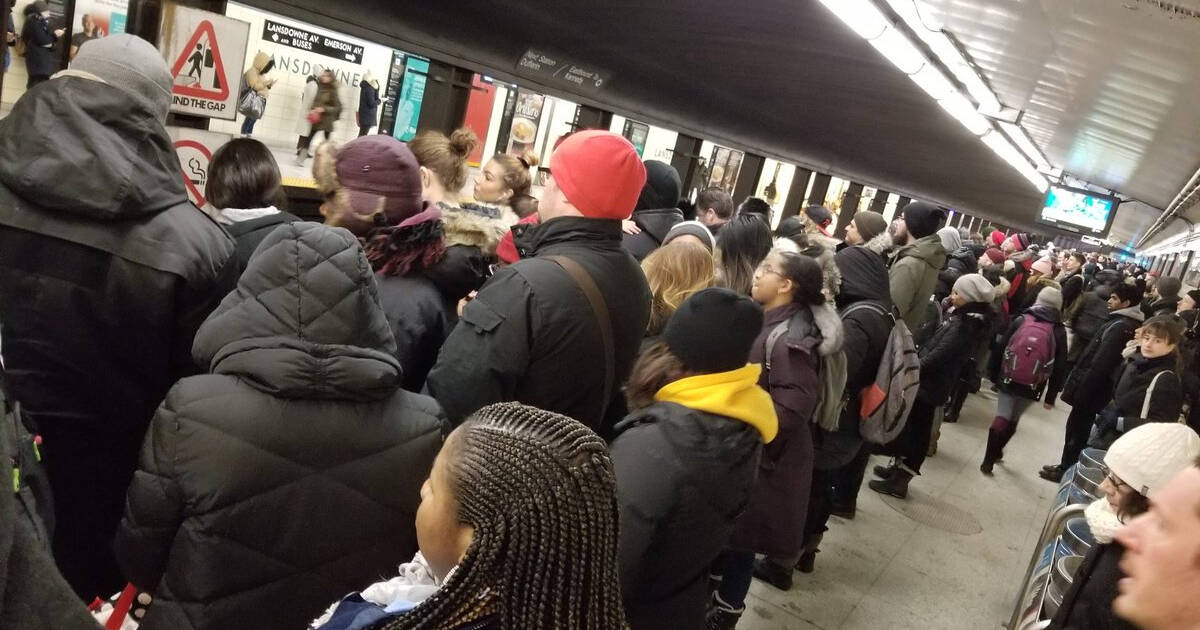 It's a slightly early Groundhog Day (in the Bill Murray sense of the term) as extreme winter weather continues to make life miserable for Toronto commuters.

Various public transit providers throughout the GTA are warning of major delays this morning, again, for what feels like the trillionth day in a row.

4 days in a row of being late for work despite leaving extra early. My favourite part was the brilliant #TTC employee asking people at St. George to "spread out" on the platform. @TTChelps , we're doing our part, we pay and we're patient. What's your problem? pic.twitter.com/tWOYouPXun

Frozen vehicles, snow-covered tracks, icy roadways—you know the drill: leave plenty of extra time to get where you're going. Also, bundle up, because you never know how long you might be waiting in the cold for your chariot to arrive.

#gotransit train is so delayed and packed that no one can get on pic.twitter.com/tjaUx3zZpo

Subway service, which has been suspended on the TTC's Line 3 since Monday due to snow build-up, remains infuriating.

Oh wait, there’s more!! Stairs packed and not moving! I hope I can make it to work at some point today... only an hour late so far! @CP24 @blogTO pic.twitter.com/jC81UR0ZBK

Shuttle buses are running in Scarborough, though apparently not very well.

I got on the shuttle bus at Scarborough town center at 7:30. I'm still not at Kennedy station yet. The traffic along Kennedy along is so bad with all the construction.

GO Transit passengers are livid across the board as many trains experience delays of more than an hour.

And once they arrive, good luck getting on.

just waiting for @GOtransit and @Metrolinx to announce their annual "pay us more" fare hikes after experiencing massive delays. it's Canada, how are you not prepared for this? a two year old could run your business better. pic.twitter.com/atqxyeoxxO

Those lucky commuters who've managed to score a spot onboard the trains are reporting significant slowdowns and unintended stoppages along the way.

UPDATE: STUCK IN TIMBUKTU ON THIS TRAIN @GOtransit ITS BEEN 65 MINUTES!!! Is this a JOKE?!

Not fun when you're jammed into a rolling porta-potty with five strangers.

@CP24 @GOtransitKT @GOtransit there are 6 of us standing in the washroom on this train. Help. Us. The answer to better service is simple. Listen. To. Us. We need more trains more often. This is not okay. pic.twitter.com/XeWlbM4LKo

Many of the stuck trains are getting too cold for comfort.

Don’t give me that. It’s been 30 mins and people are freezing on this train on one of the coldest days in this city. No one needs to get on and off the train at this point. It’s 8:38am and this is the 7:20am express train. No one is waiting to access this train. pic.twitter.com/TOaM3pBQPa

TTC buses and streetcars are straight up passing people by, but only because they literally have no more room to squeeze anyone on (though, it should be noted, this isn't exclusively a cold weather problem).

another day with the Take The Car, these operators were verbally abusive to 50+ passengers on the 506 college st car at yonge and college. pic.twitter.com/oBXiNu54AL

And let's not forget about our ol' friend the "signal problem," which appears to be slowing down subway service — again — all the way from Union to Finch.

I wonder if any of @JohnTory @ChrisGloverMPP @joe_cressy have ever suffered through one of the frequent morning human traffic jams in @unionstationTO due to the endless construction?

People are really starting to lose their cool at this point.

Dufferin subway stn eastbound was packed today. I managed to squeeze onto the *fourth* train.

Temperatures are expected to swing upwards by as much as 25 degrees by Sunday, which should put an end to our worries about frostbite while waiting for the bus.

As for the downtown relief line that'll actually alleviate all of this overcrowding, try to be patient... for another 10 years.

by Lauren O'Neil via blogTO
Posted by Arun Augustin at 7:50 AM