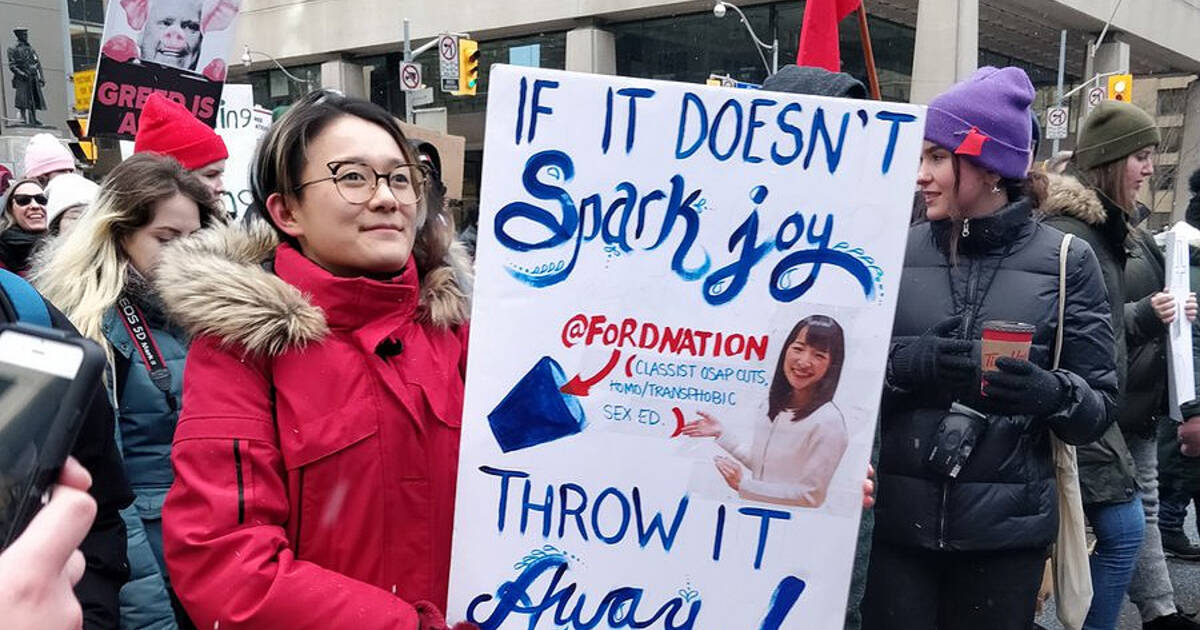 From Yonge-Dundas Square to the front lawn of Queen's Park, Toronto is currently filled with the voices of students dissenting against cuts to the Ontario Student Assistance Program (OSAP).

"In 2012, the Quebec government decided to raise tuition rates. In response, a quarter of a million students took to the streets to demand change," reads a Facebook event for today's protest in Toronto. "The result was a halting of tuition increases."

"This year, The Ontario government has decided to target our right to education through the recent OSAP reform," it continues. "All students will be affected, and now it is our time to tell the government that we will not sit in silence."

There are here and they are loud. Thousands of students at Yonge-Dundas square have started their chants. #DefendOSAP #WeAreTheStudents pic.twitter.com/VDOdkHtUtZ

More than 4,400 people marked themselves as "attending" the protest on Facebook, and it looks like at least half of them actually showed up (not bad, as far as Facebook events go.)

The rally began at Yonge-Dundas Square around 2 p.m. on Friday afternoon.

Students and their supporters brought along clever (and savage) signs of support for the cause.

Some of them more creative than others.

Next, the group marchined in unison to Queen’s Park...

Chanting all the while.

A couple students outside my window sound like they disagree with @fordnation re OSAP cuts #onpoli pic.twitter.com/liVZnU4p6f

There, the peaceful protest has resumed.

Students are protesting today at Queen’s Park to #SaveOSAP. I believe in an Ontario where any student can go to uni/college without worrying how to pay for tuition. Thats why we changed OSAP to provide free-tuition.@fordnation is targeting students who need help the most. #ONPoli pic.twitter.com/TnR2KAYa2h

Speakers such as NDP and opposition leader Andrea Horwath are lending support to the many young demonstraters.

Those who weren't able to make it downtown held rallies of their own in support of the movement.

Let's not forget: #Educationisaright.
Seneca students deserve the opportunity to continue their education without financial distress. We stand in solidarity with students and support their march against OSAP changes
#SaveOSAP #onpoli @SenecaMedia @CBCToronto @CP24 @blogTO pic.twitter.com/3HSHQ8Mq1X

And it's not only students in Toronto.

Students are outraged; we took to the streets! ✊🏼@UWindsor students rallied today to defend our right to a public education! We told Ford that students will not stand by and watch as he cuts our OSAP and our universities' funding.

The call to restore critical funding to university and college students who need it is echoing across the entire province today.

"education is one of the greatest democratizing forces in the world" @kernaghant #SaveOSAP #FreeTuition #SaveEducation "Education is an investment in our people, in the future" pic.twitter.com/P8dUi4gs5f

The students were scheduled to continue fighting the power until 4:30 p.m. on Friday afternoon, but their demonstrations show no sign of slowing down anytime soon.

Windchill temperature of -17 degrees did not stop any of these people from standing up for themselves. #ONpoli pic.twitter.com/izpiCpFi2y

by Lauren O'Neil via blogTO
Posted by Arun Augustin at 1:53 PM