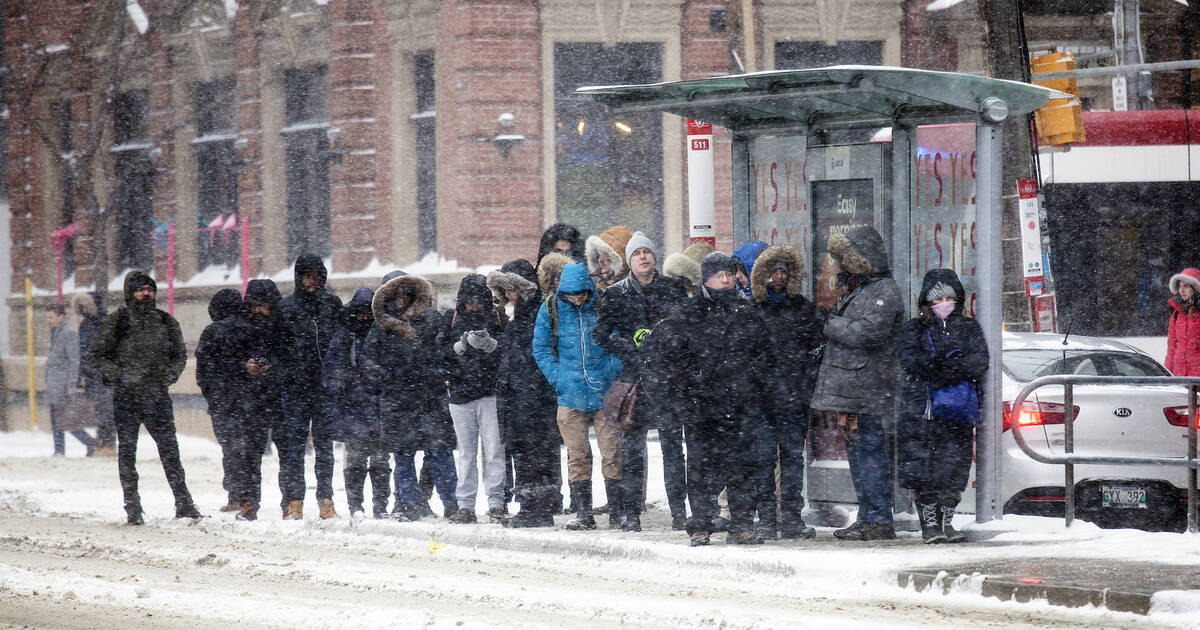 Subway, streetcar, plane, train, bus, bike, foot or automobile, there's no good way to get around Toronto after a major snow dump (except, perhaps, for military tanks, but we're not quite there just yet).

The city is in a bad way this morning on the heels of a storm that left us with a whopping 26.4 cm of snow to dig out from.

Crews of all kinds are going whole hog to clean up roads and sidewalks right now, but there are only so many snow plows in existence... few of which can actually tackle train tracks or your windshield.

Your best bet? Stay the heck home (it's a full-on snow day for many students!) or, as our perpetually beleaguered friends at the Toronto Transit Commission so often put it, "give yourself plenty of extra time" when planning your commute.

TTC buses are getting stuck in the snow all over the city right now...

#ttc this bus is not in service. Play safe out there folks. Try to be patient with our service men and woman. #snowTO pic.twitter.com/Capv0zG9uK

If they can even move in the first place, that is.

So ... if anyone is wondering where their bus is this morning, it’s probably on Eglinton frozen in a pile of snow. #torontostorm #commuterlife #TTC pic.twitter.com/4ioHZdcUkn

Only two of the transit commission's four subway lines are functional right now, and that's a generous use of the term.

Subway trains were stopped between Woodbine and Warden Stations on Line 2 for most of the morning on account of "weather related rail issues."

That delay cleared around 8:40 a.m., according to the TTC, but the Bloor-Danforth line remains in absolute chaos as signal issues are now causing "longer than normal travel times" westbound between Woodbine and Yonge.

The entirety of the subway system's Line 3 in Scarborough remains closed due to snow on the tracks.

Line 3 Scarborough RT: Shuttle buses are running in place of RT service today. This is due to the heavy build up of snow. Plan for extra time on your commute.

Shuttle buses are filling in the gaps... when they're not getting stuck.

Streetcar riders are livid, as per usual, by long wait times and overcrowding at stops.

@TTChelps it'd be awesome if the #TTC could remind people that mobbing the sidewalk when waiting for a streetcar blocks those who are walking. Its especially bad on days like today when there's a lot of snow. East bound @Joe Shuster, Atlantic and Sudbury (pictured) are worst. pic.twitter.com/AmrTD7RGLx

Some passengers are taking the matter of not being able to catch a ride into their own hands (er, feet) by kicking the snow away from streetcar doors that are frozen shut.

TTC fail: riders had to use our feet to kick snow away from streetcar doors, which wouldn’t open. Only one door barely opened. Anyone w accessibility issues wouldn’t be able to get on. #TTCfail #Ttc #managesnow #findsolutions #supportriders #accesstoTTC #accessibility pic.twitter.com/FgraGm0j4z

Public transit is still a lot more reliable than pretty much any other form of transportation right now.

Even the all-wheel drive motorcycles are stuck... pic.twitter.com/ovq5FvejGT

Cars are buried all over the city.

And those who have managed to make get their vehicles out from under the icy blanket are now struggling not to get stuck again.

Abandoning cars when stuck in the great Toronto area snowstorm of 2019. pic.twitter.com/6sO4NB92BT

Think you can breeze to work by hailing a cab? Think again.

Most snow I have seen on Bay St. ever. But trains and streetcars are running #torontostorm pic.twitter.com/yAoNvm8Toj

You couldn't even fly out of the city right now if you wanted to.

I've been at the Toronto Pearson Airport since 2am with no end in sight. There have been massive flight delays, and some people even had to spend the night. #ONStorm #torontostorm pic.twitter.com/U65VWYzy76

But hey, it could always be worse.

My friend texted me saying a ttc bus has been stuck on dufferin blocking their driveway since last night. Her husband is taking the TTC to work now pic.twitter.com/k4PahdzePY

Whatever you do today, make sure you do it with enough time to get back indoors by nighttime, when it'll feel like -30 C with the windchill.

Good luck out there, friends who aren't ever allowed to work from home.

by Lauren O'Neil via blogTO
Posted by Arun Augustin at 7:30 AM