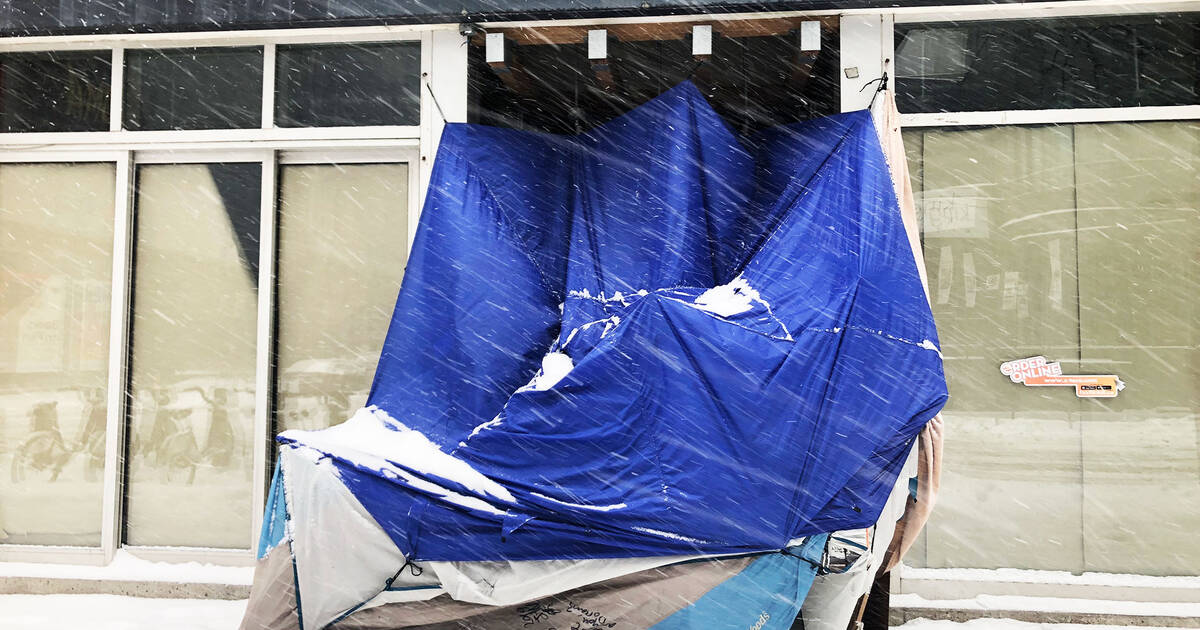 Tonight and tomorrow will see blizzard-like conditions continue to pummel pedestrians and commuters on their way home—but none will have it worse the next few days than those Torontonians living without housing.

As shelters continue to operate at near maximum capacity night after night, many of the city's most vulnerable are now taking to Toronto's sidewalks to set up temporary homes in the midst of snow warnings and extreme cold alerts.

Up until now, the matter of tent cities and makeshift housing has only existed on the periphery of every day life for the majority of people living in the city. 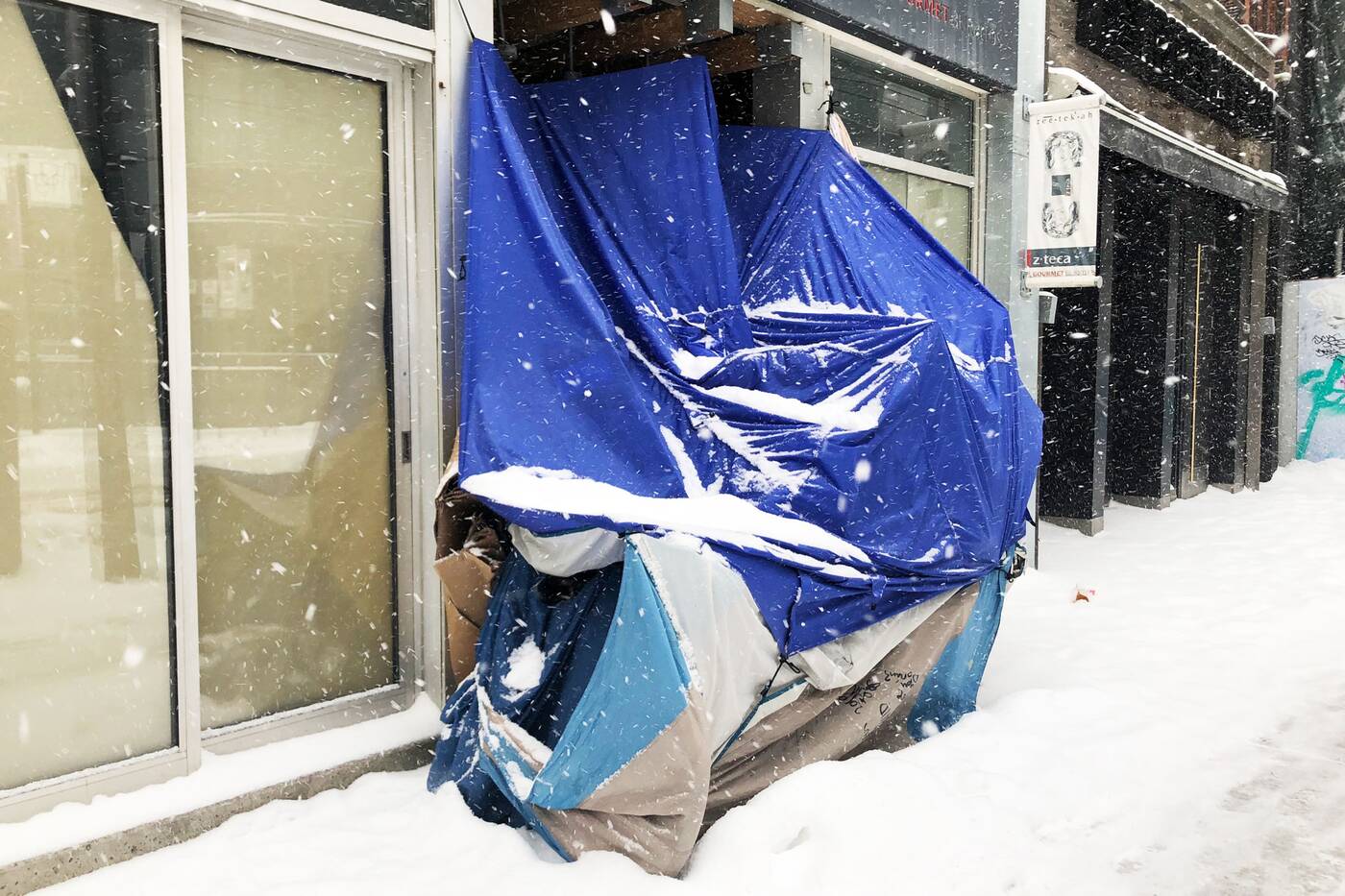 A temporary home made of tarps has been set up in the empty Z-Teca on King West. Photo by Tanya Mok.

But this winter, an unprecedented number of temporary homes made from assorted tarps, cardboard boxes, and shopping carts have sprung up in some of the city's most high-traffic areas.

Once confined to hidden places under the Gardiner Expressway, or beneath bridges in the brush of the Don Valley, the doorways of empty storefronts on Queen West and in the Entertainent District now appear to be the preferred vertebrae for these makeshift structures and those who must inhabit them.

Activists are calling on the City to declare homelessness and a deadly shortage of shelters a state of emergency. City Council is set to decide on the matter Jan. 30.

In the meantime, those experiencing homelessness are faced with a difficult decision in the dead of winter: set up camp and run the risk of being evicted by the City from their temporary homes, or face being turned away at shelters that are too full to accommodate them.

"We see frustration amongst the ones we turn away," says Brother Tom Liss, who has been working with Good Shepherd Centre at Queen and Parliament since 2016. 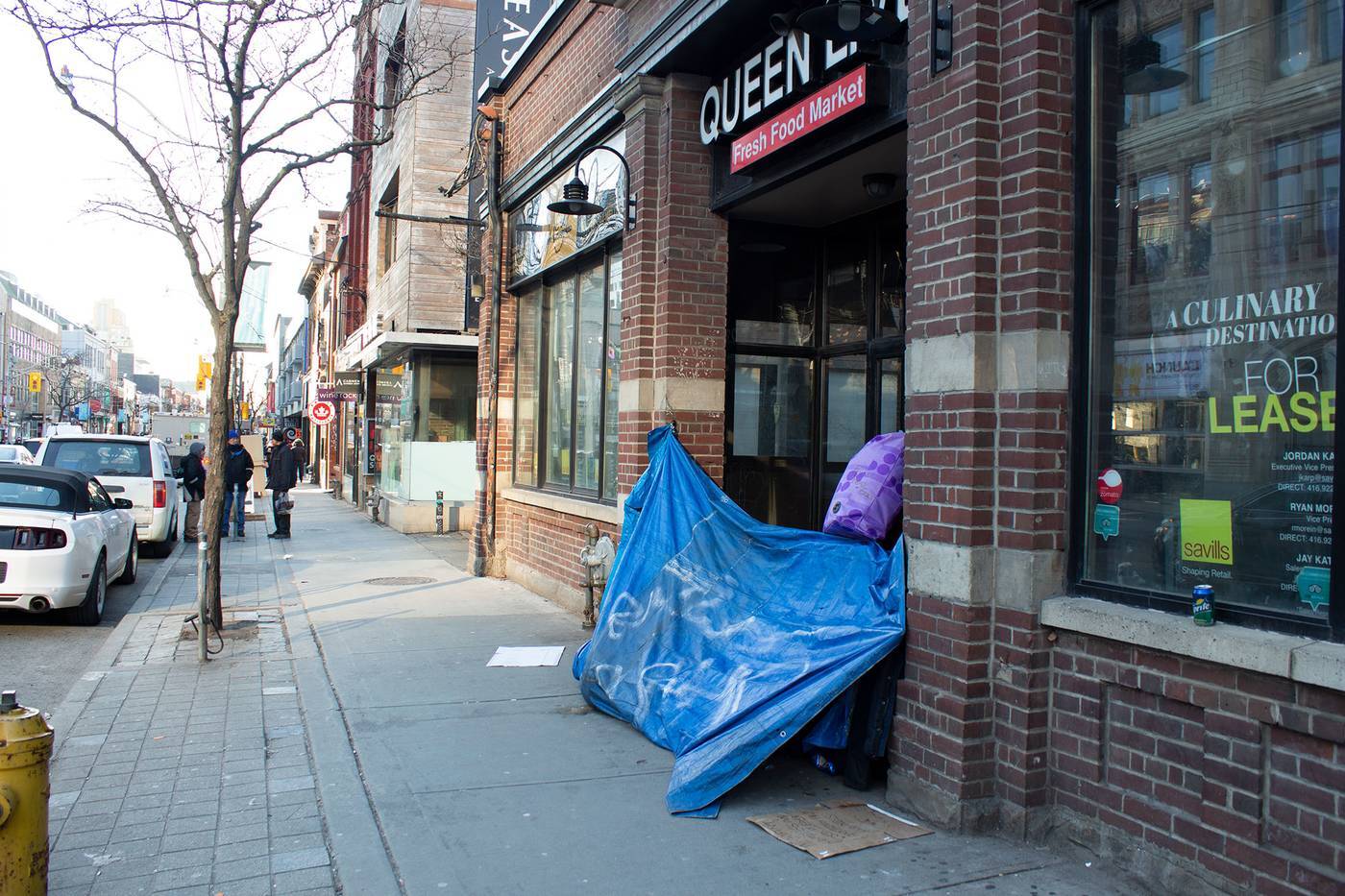 Someone has used the doorway of the abandoned Queen Street Live building to set up a shelter. Photo by Tanya Mok.

The charity, which offers 95 beds nightly, has been running at "100 per cent capacity, 365 days a year, for several years", with only two to four beds available per night.

With respite centres filling up within days of opening—and being in horrible conditions inside, on top of that—it's no wonder that those experiencing homelessness are flocking to the warmer city centres for a night of rest.

"There's always been a number that basically managed to keep invisible...but the visible ones have really increased in the last year," says Liss.

"I really dont know where they’re going to have these people stay...Right now the city is scrambling to get out all these respite centers and shelters and all that. But those are bandaids at best."

by Tanya Mok via blogTO
Posted by Arun Augustin at 3:38 PM