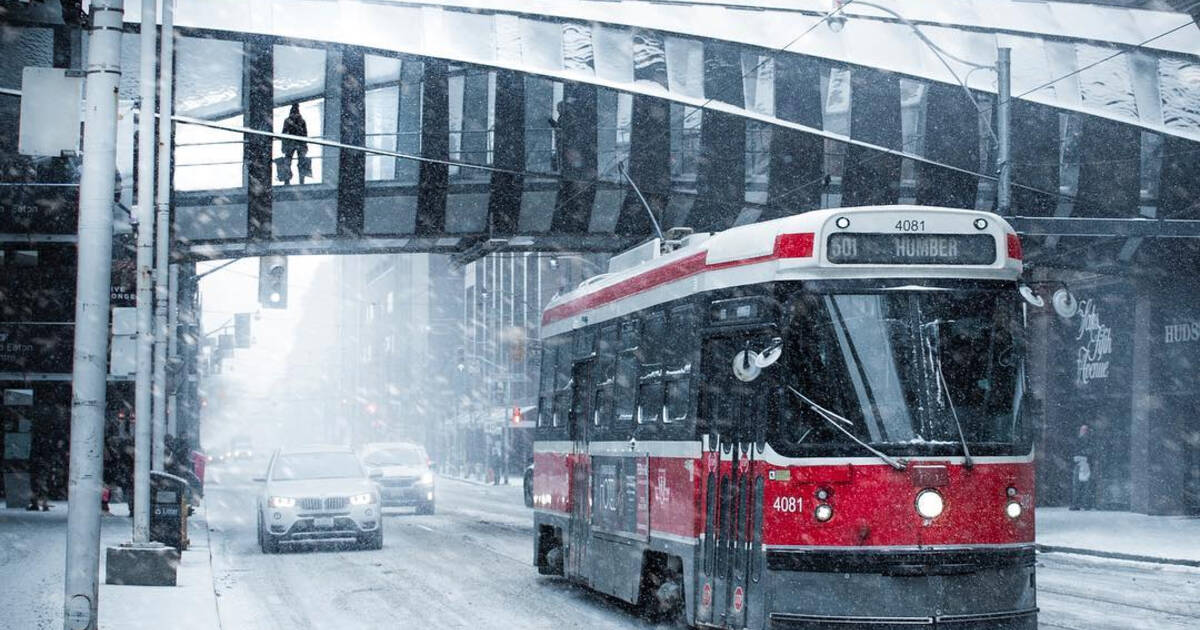 Toronto is suffering through this not-so-merry Monday under blizzard-like conditions that have health, weather and law enforcement officials telling everyone to stay off the roads.

You may not have that option, if you're already at work or school, but if there's somewhere you need to be this evening— a class, a meeting, an event, whatever— you may want to check that it hasn't been cancelled before you put on your boots.

Plenty of warning ⚠️ given about todays snow storm. If you don’t need to drive, please don’t, take transit if possible. If you need to drive, plan for the weather. Leave lots of time, slow way down and clear your entire vehicle snow snow ^bm https://t.co/HS469j9Lmu @ONtransport pic.twitter.com/EkHlzrvQF0

I can tell you right now that U of T's Mississauga and Scarborough campuses are shutting down at 4 p.m. and 5 p.m., respectively. The school is cancelling all classes, tutorials, labs, tests and academic activities "until further notice" due to severe weather.

WEATHER UPDATE: George Brown College is CLOSING AT 3PM due to heavy snow forecast for #Toronto. https://t.co/erol9Ikjng All @Coned_GBC classes scheduled for this evening are cancelled. We continue to monitor conditions. We’ll post an update by 4am about tomorrow’s classes. pic.twitter.com/DRVfSZMB7a

The Bentway Skate Trail and its free Monday rentals are out of comission too, as snow swirls violently on the winds of mighty Lake Ontario.

Monday snow day! Due to the extreme weather, The Bentway Skate Trail will be closed tonight (Monday, January 28). Be safe everyone! pic.twitter.com/qxhrZTNKnG

All sorts of meetings, lessons, practices and activities have been rescheduled, not to mention all the gigs and shows.

But what hurts the most for many in Toronto (I mean, aside from the actual snow) is our overcrowded public transit system.

The TTC is warning customers that they may experience longer than normal travel times as we head into the evening commute, which is pretty much a given when it's snowing cats and dogs.

Meanwhile in Canada.. the accumulation of snow at Yorkdale Station #ttc #ONStorm pic.twitter.com/o4yI3WInbD

It's not even 4 p.m. and Line 3 on the subway has already been shut down due to "operator visibility challenges" and "snow build-up significant enough to disrupt service."

Line 3: No service due to weather conditions. Shuttle buses are on the way.

Painful winds, service delays, detours-aplenty have commuters on edge across the city.

@TTChelps this is by far the worst service I have ever seen on the 510. Massive bunching and totally unacceptable gaps between vehicles. Does anyone there care about this? Does anyone work to fix this? This ridiculous!!!! In this weather people are freezing out there! pic.twitter.com/KOlFinCkJv

But, please be assured that the TTC is working hard to keep everyone moving safely.

"We have all available hands on deck, or on standby, to prepare for/deal with, what is going to be a slow, messy commute home this afternoon," says TTC spokesperson Stuart Green.

"We're taking preventative steps to avoid problems across the network and have contingency plans just in case."

Extra #TTC crews in to help you get where you need to go but all modes impacted by the weather. give yourself extra time, don’t rush on slippery floors, and try to be kind to your fellow customers. Thanks for your patience in this #snowmageddon. @TTCsue @TTChelps @ttcstuart

The City of Toronto remains under a snowfall advisory as of 4 p.m. on Monday with as much as 20 cm of snow expected to accumulate this evening (or more, for neighbourhoods near the lake.)

Heavy snow should persist into Tuesday morning, according to Environment Canada, making Tuesday's commute just as messy and cold.

"Prepare for quickly changing and deteriorating travel conditions," warns the federal weather agency. "Surfaces such as highways, roads, walkways and parking lots may become difficult to navigate due to accumulating snow."

by Lauren O'Neil via blogTO
Posted by Arun Augustin at 1:58 PM