10 secret streets to explore in Toronto 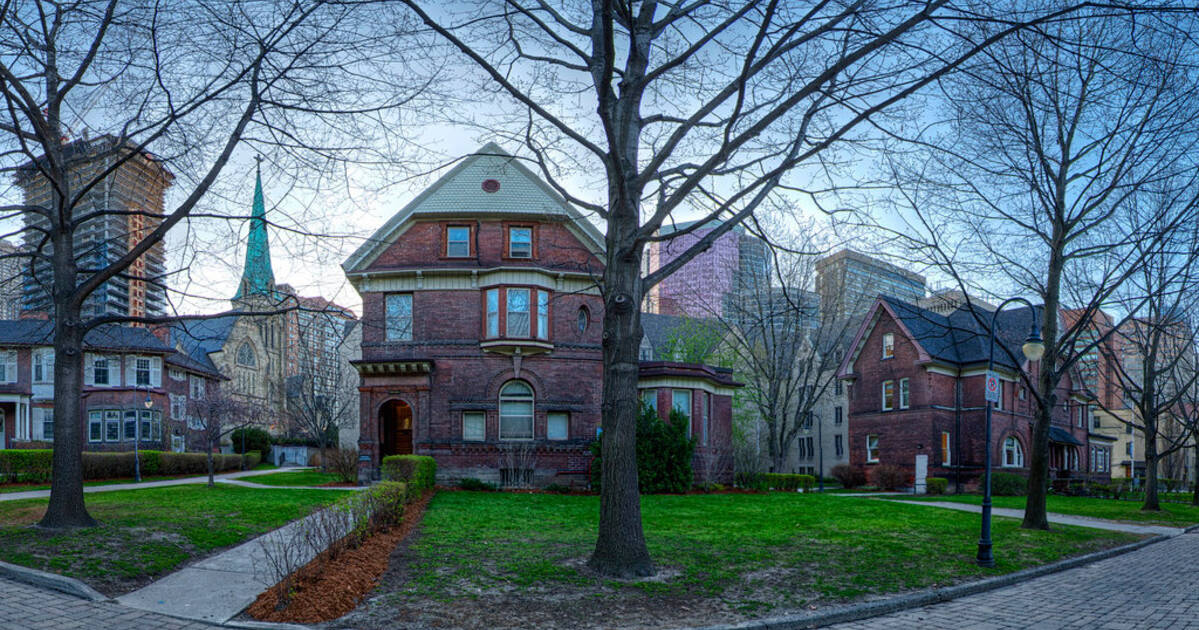 Secret streets in Toronto only deserve such a designation if you don't know where to look for them. You could pass them a hundred times without noticing, but once you've been tipped off, you'll always be able to find them. And you'll want to do just that, as they are some of the coolest places in the city.

Here are some secret streets to explore in Toronto.

Did you know that U of T has a private street? There's a gated entrance off of St. Joseph St. that leads to Elmsley Place, which St. Michael's College acquired in the 1920s. Pedestrian access is welcome, which is a good thing â€” it might be one of the nicest streets in the city.

Possibly one of the coolest streets in Toronto, you enter off of Cecil Ave. and walk north until you encounter a row of Second Empire houses across from a hidden parkette. The whole time you'll feel in on an urban secret. 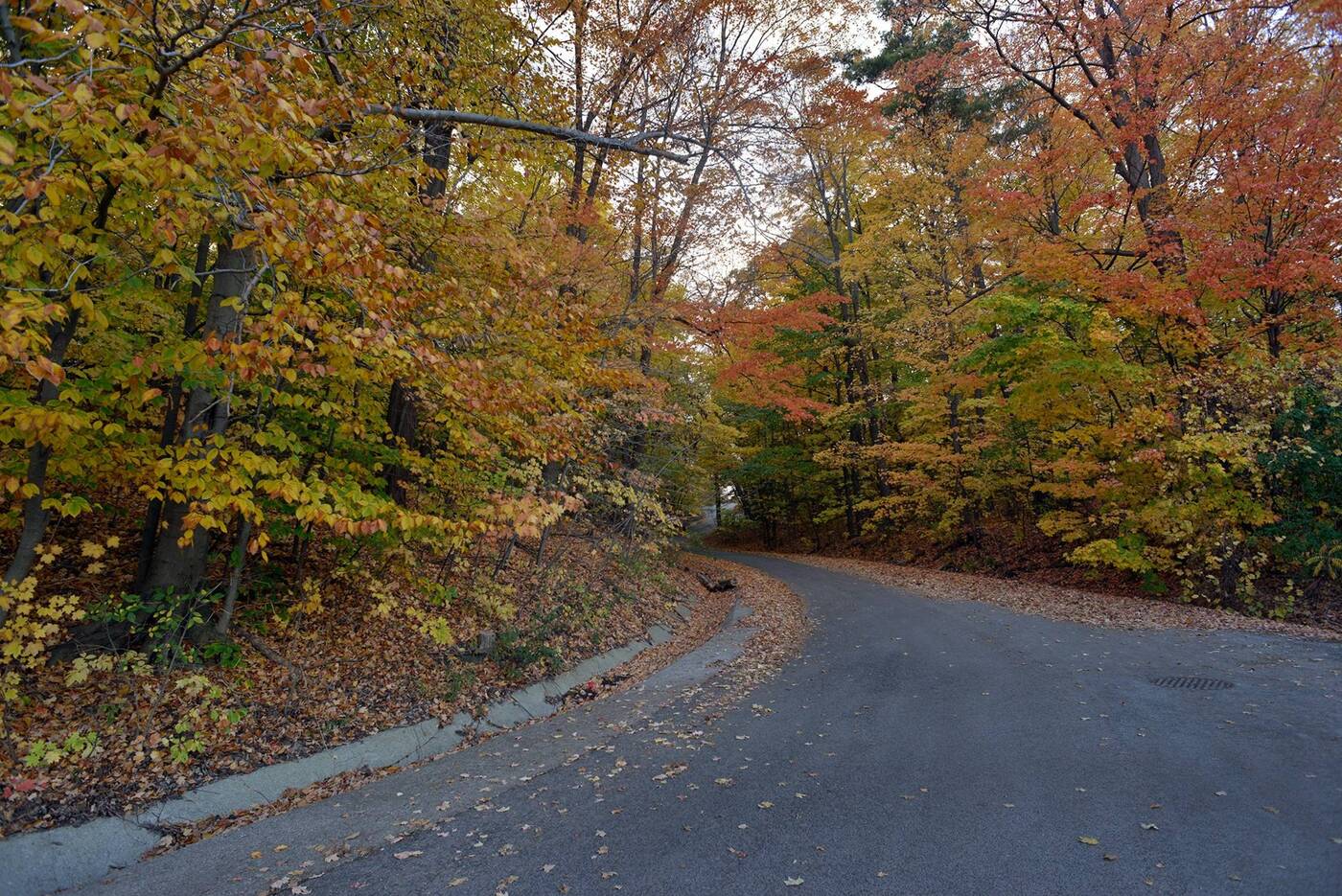 The steep gradient of Redway Rd. in the fall.

This one won't be a secret to Toronto's cycling community, who test their mettle by climbing one of the steepest hills in the city. This winding road leads down the ravine at Crothers Woods to the North Toronto Sewage Treatment Plant.

This one runs along the opposite side of the Don Valley, tucked off of O'Connor Drive. Its secret status owes mostly to the fact that it leads only to the Toronto Police dog services facility. If not for that, it'd make the perfect spot to park on a romantic drive. 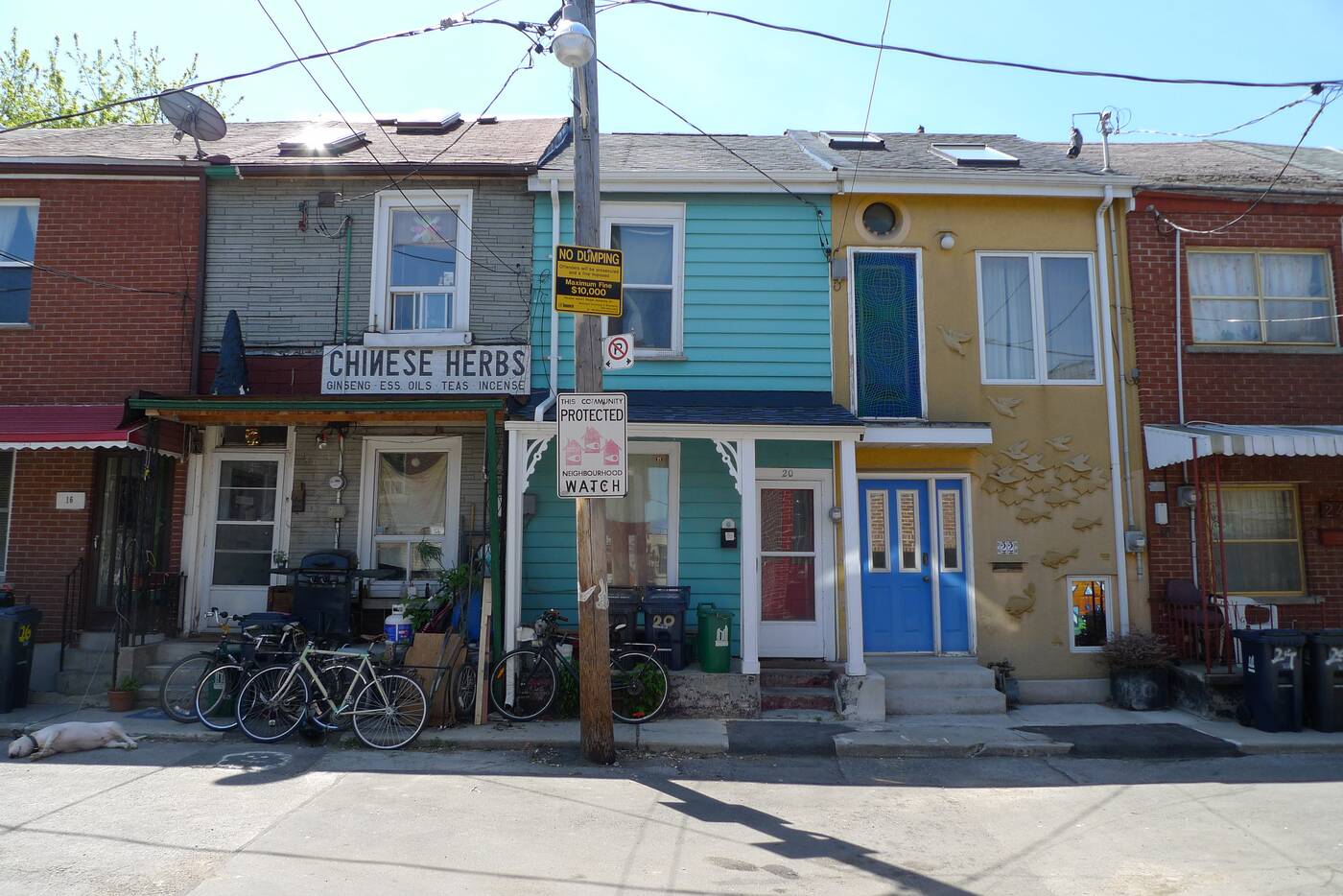 One of a few hidden laneways in Kensington Market, this one is probably the most interesting of the bunch. A short laneway opens to a collection of eclectic homes the likes of which you won't encounter anywhere else in the city.

Located just a few minutes walk south from Kensington Place, Fitzroy Terrace is home to the oldest house in the Market. Right beside it is Gradient House, a revamped cottage designed by Superkul Architects. It's like a mini history of Kensington Market in the span of a few metres. 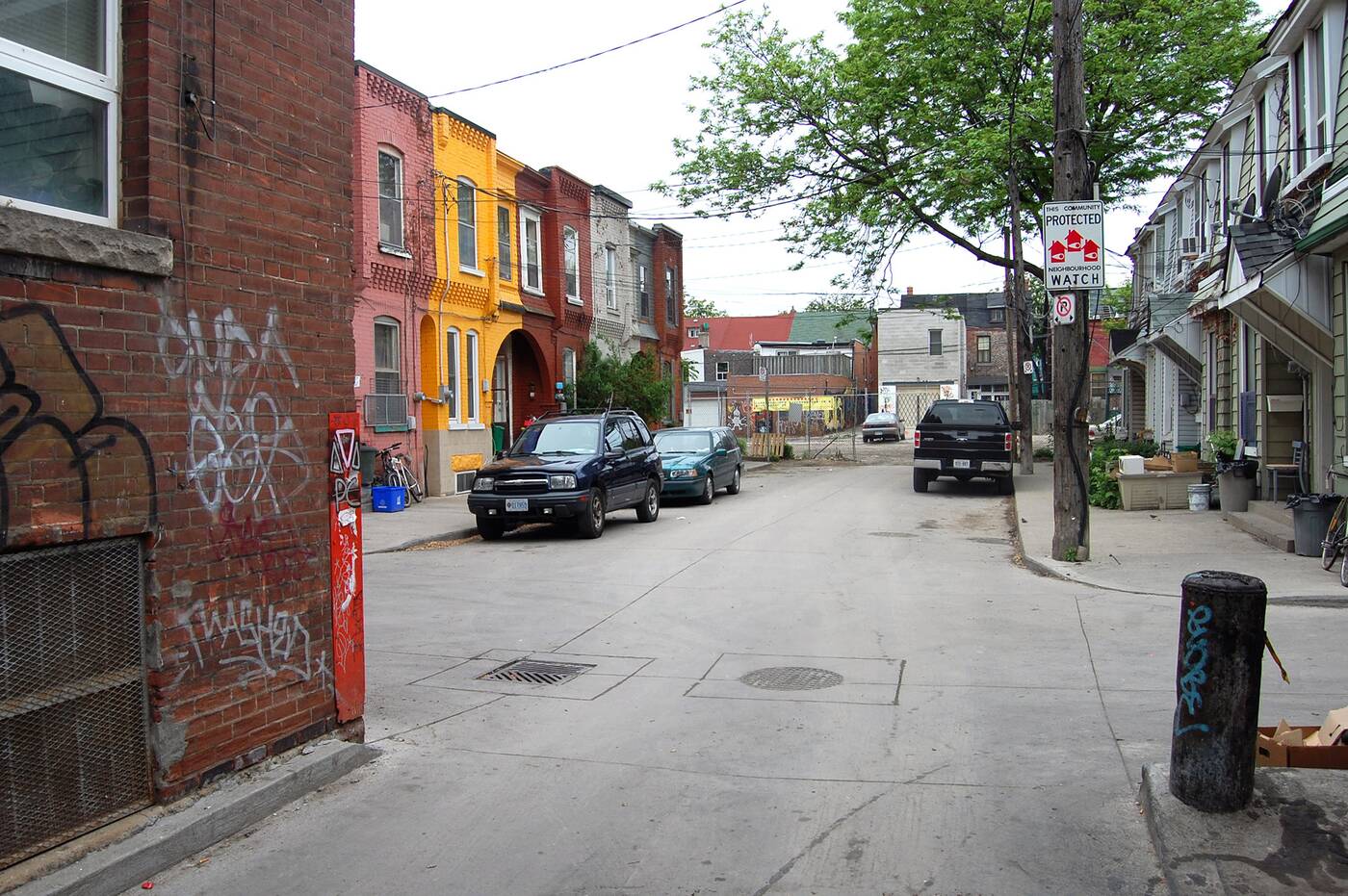 Blink and you'll miss the entrance to this cul-de-sac off of bustling Spadina Ave. in the heart of Chinatown. If you do manage to find your way here, you'll encounter a collection of colourful row homes that harken back to late 19th century Toronto.

Quite possibly the most secret street in Toronto, this one doesn't appear on Google Maps, but if you follow along Glen Oak Drive after Benlamond Ave. you'll see the street sign marking this most private of laneways. 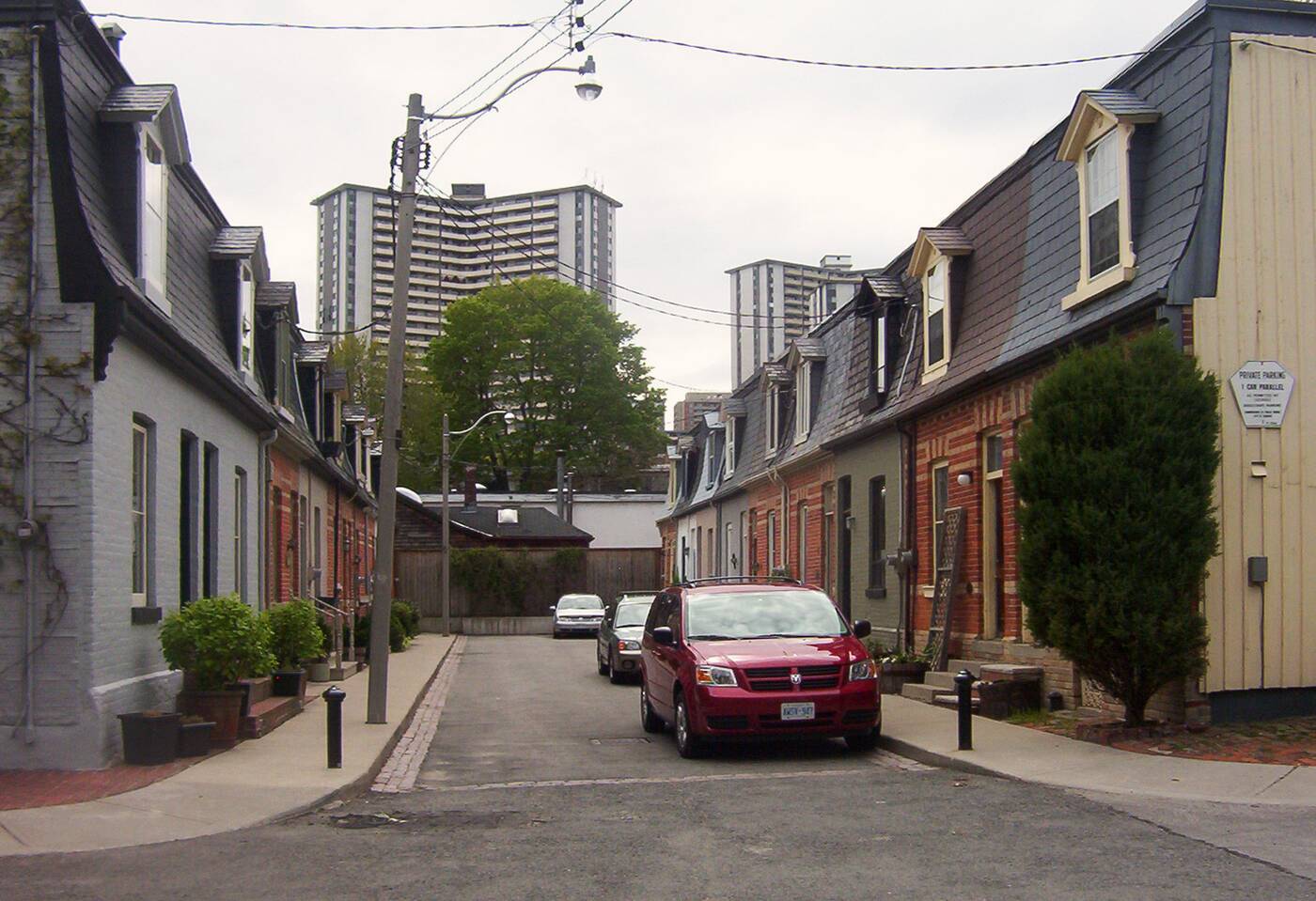 One of a number of quirky streets throughout Cabbagetown, Alpha Avenue is lined with late 19th century workers' cottages under the shadow of the hulking towers of St. James Town.

Another one that's nearly impossible to spot unless you know exactly where to look, Bisley St. is a laneway located off of Verral Ave. near Carlaw and Queen streets. It's much more than that, though, as there's a row of 19th century houses that call this home.

by Derek Flack via blogTO
Posted by Arun Augustin at 5:50 AM