10 Toronto intersections as they were in the 1970s 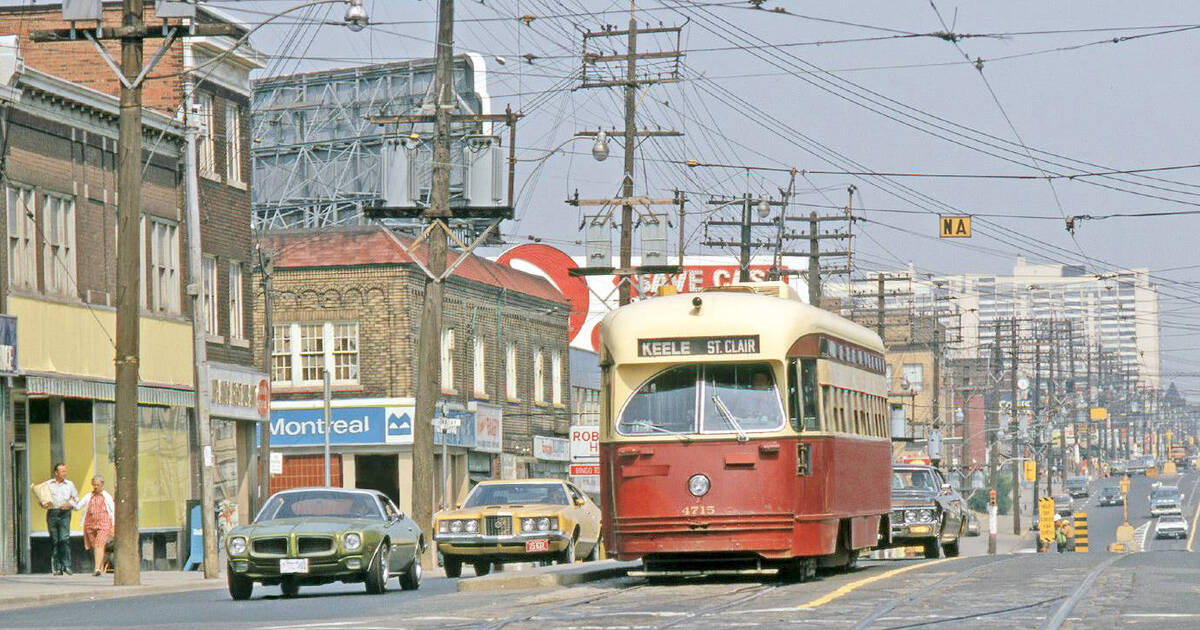 Toronto of the 1970s was the stage for a significant battle between old and new. Historical buildings were regularly demolished to make way for modern skyscrapers, but the roots of the old brick city, stained from years of burning coal, still defined much of the streetscape.

Here are 10 Toronto intersections as they were in the 1970s. 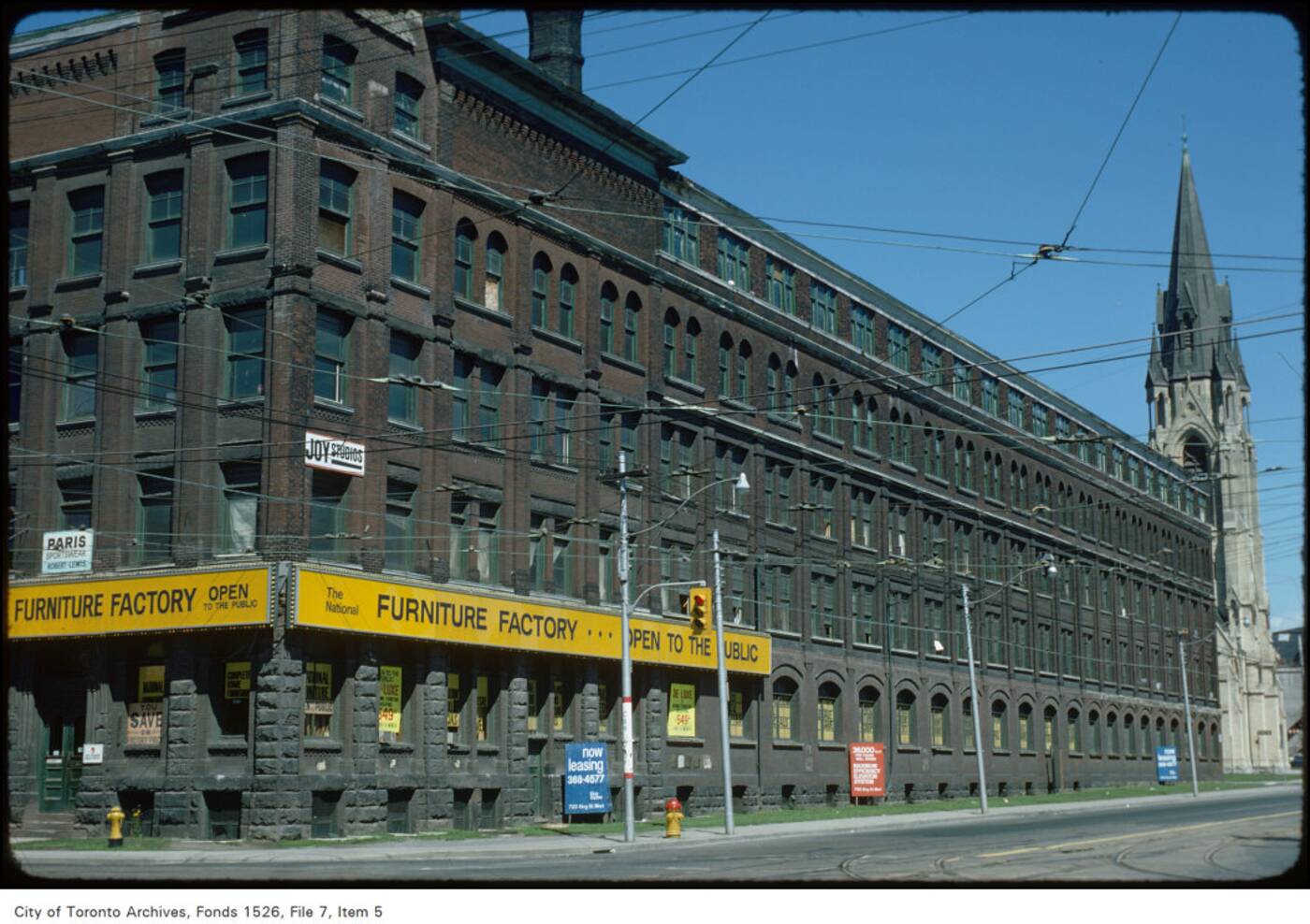 Brick buildings like this one at the northwest corner of King and Bathurst were demolished en masse throughout the 1970s. The building here was once home to the Otto Higel Company, manufacturer of pianos and organ supplies. Here's what the corner looks like today (that ugly clocktower is an homage to the old building). 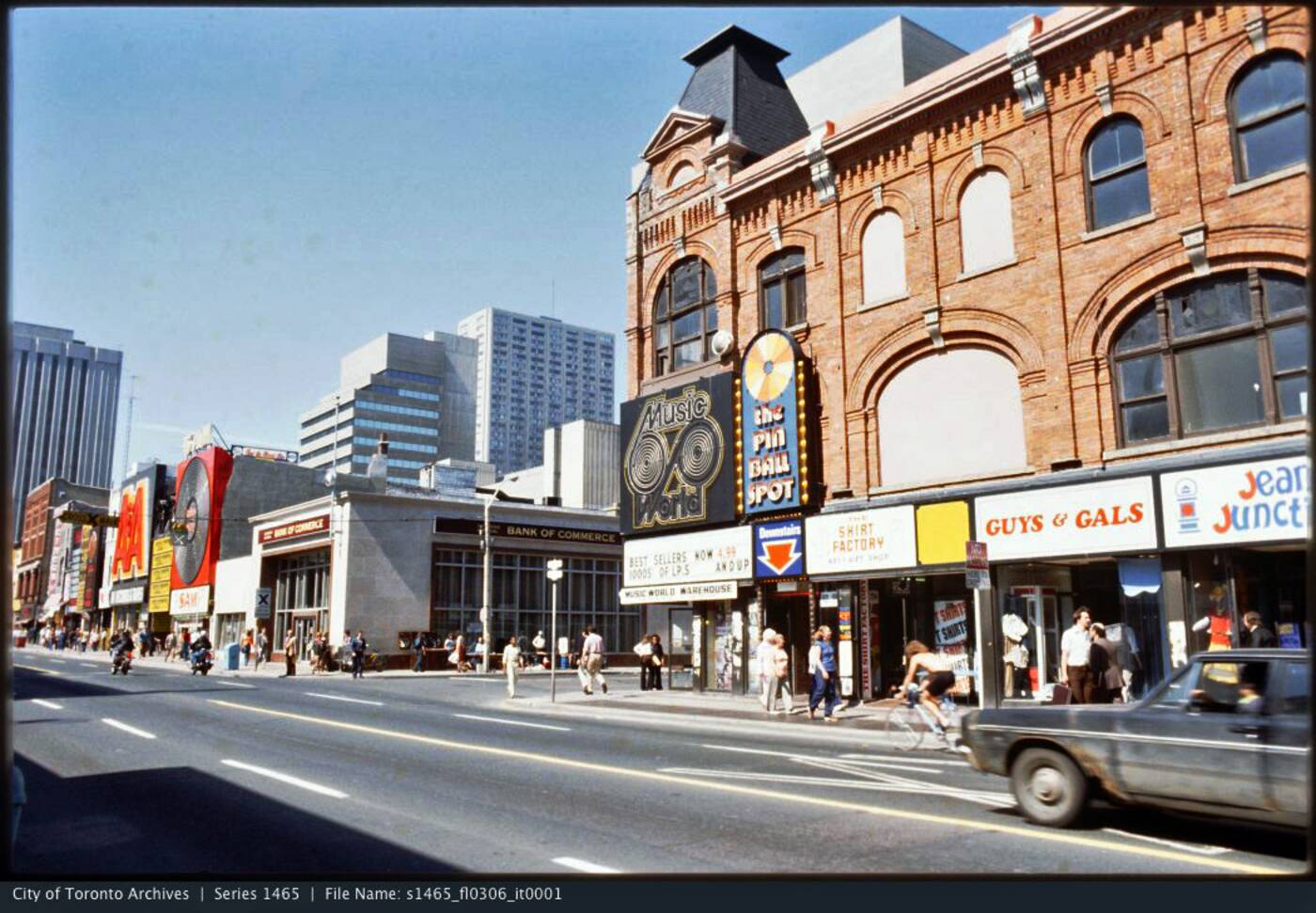 Ah, when Yonge St. had yet to be sanitized. Almost all of the buildings along the east side of the street depicted here are gone, lost variously to demolition and fire. Here you get a sense of just what a music mecca the area was in the 1970s. This is the view today. 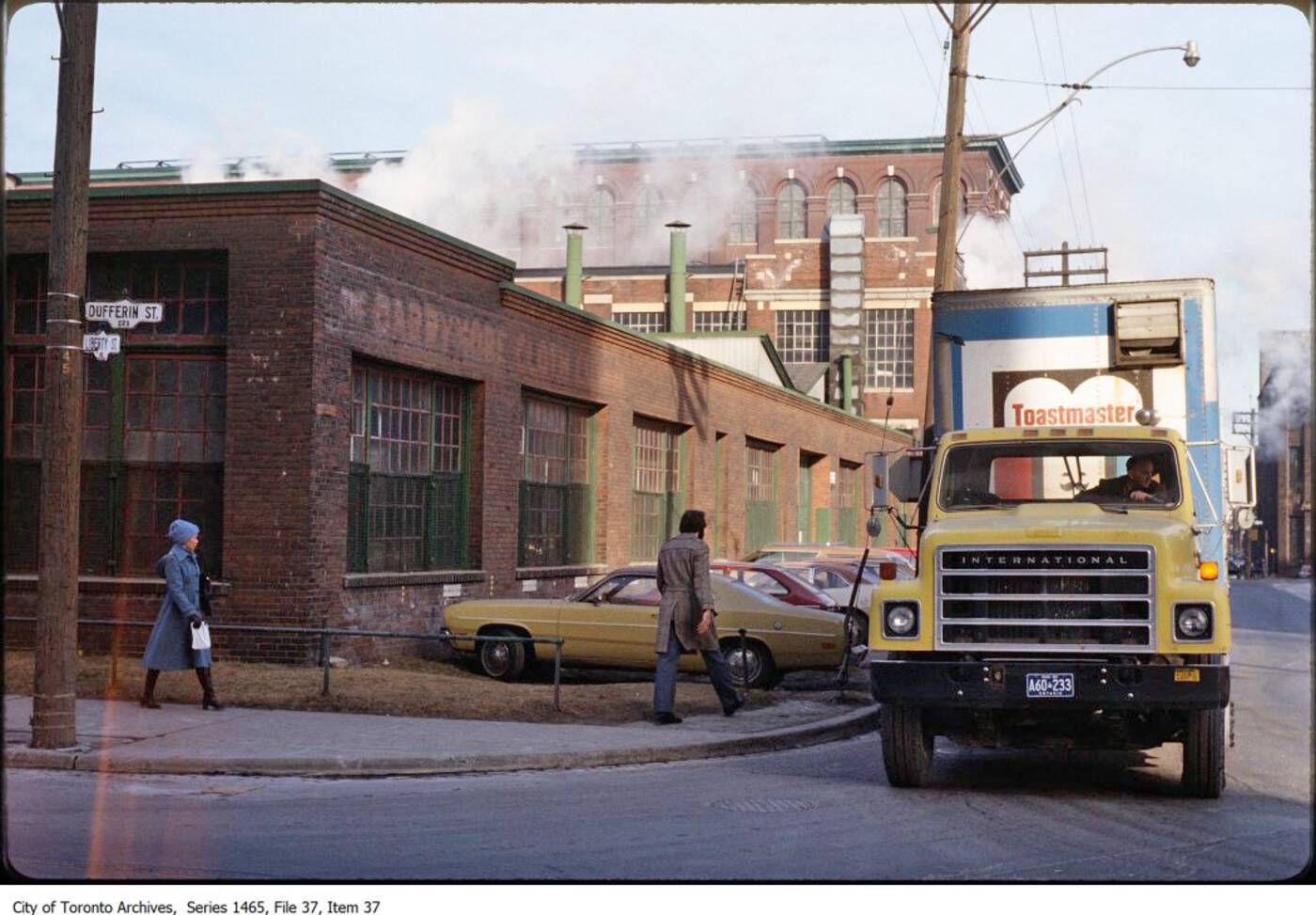 Before Liberty Village was home to entertainment and tech companies, and then towering condos, it was an active industrial neighbourhood. This photo from the mid 1970s gives a good sense of the gritty characteristics of the old neighbourhood. Here's what the corner looks like today. 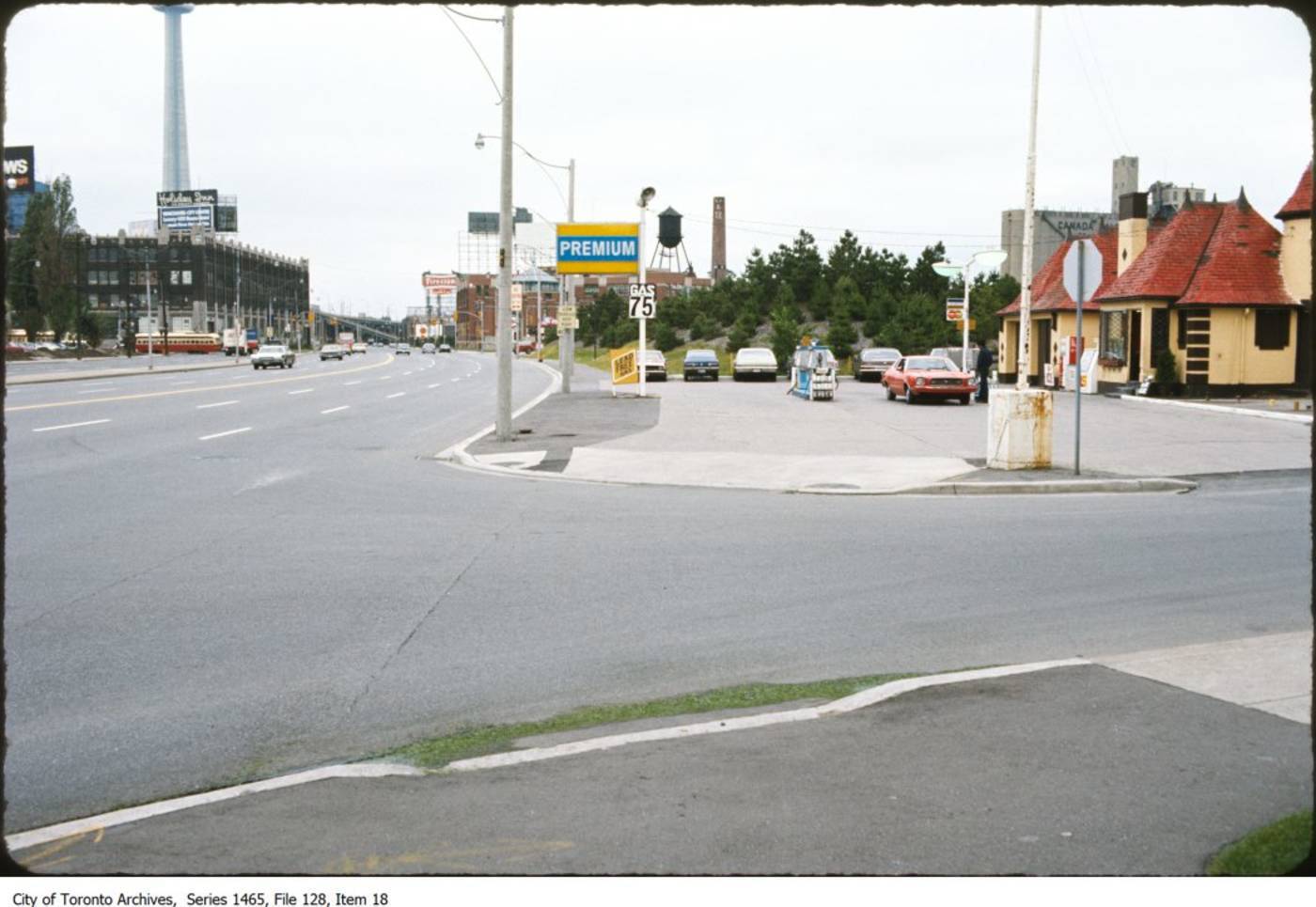 So much wide open space is on display in this photo of Lake Shore Blvd. looking east towards downtown. On the left you see the old Loblaws warehouse (soon to be the facade of a condo podium) and to the right we have a Joy Oil Station with prices that reflect the 1973 oil crisis. Here's a similar view today. 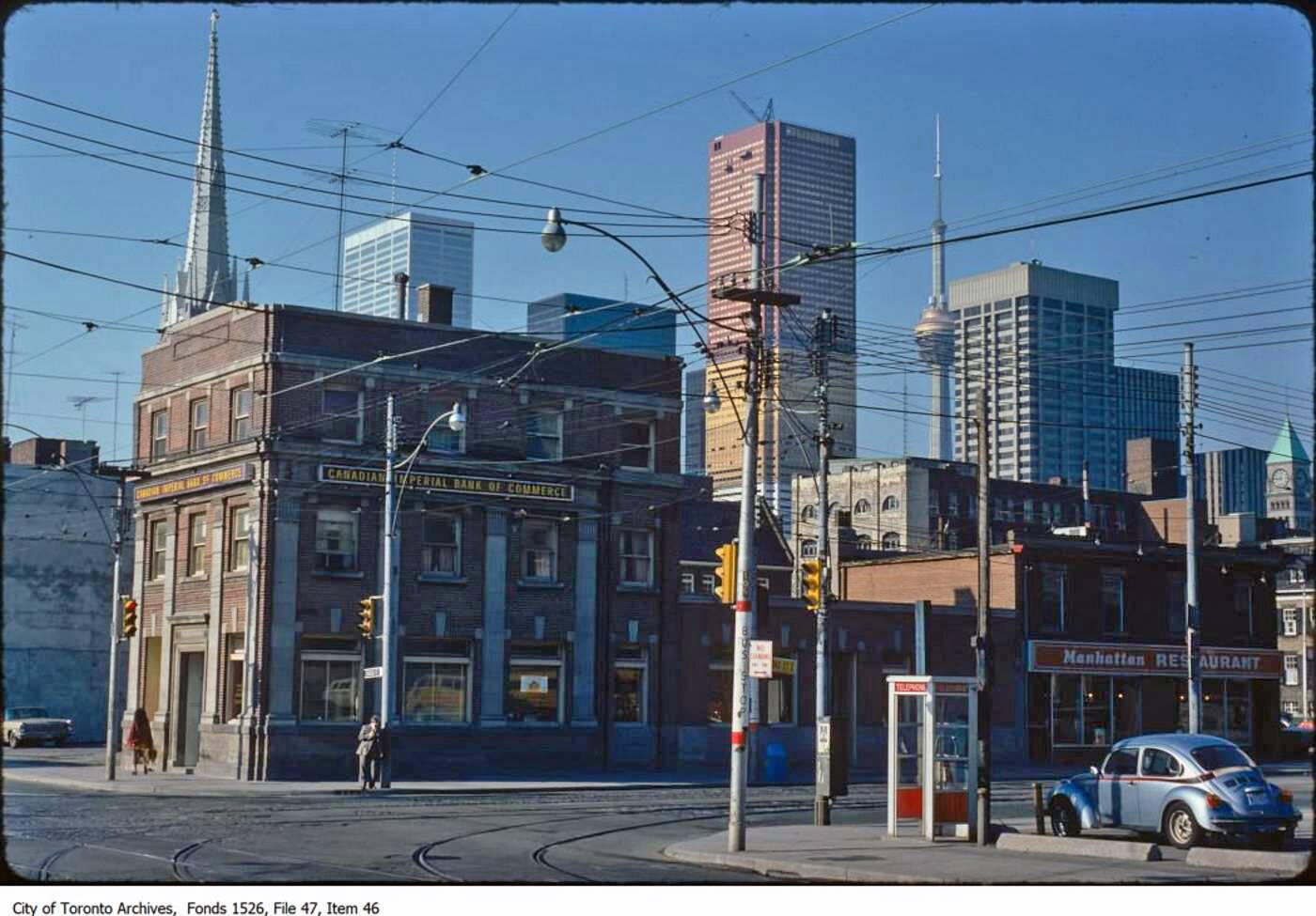 What a remarkable image of 1970s Toronto. Looking across the old bank building on the corner, we see two pillars of the contemporary skyline in the form First Canadian Place and the CN Tower. The VW bug on the right side was a common sight during this period. This is the view today. 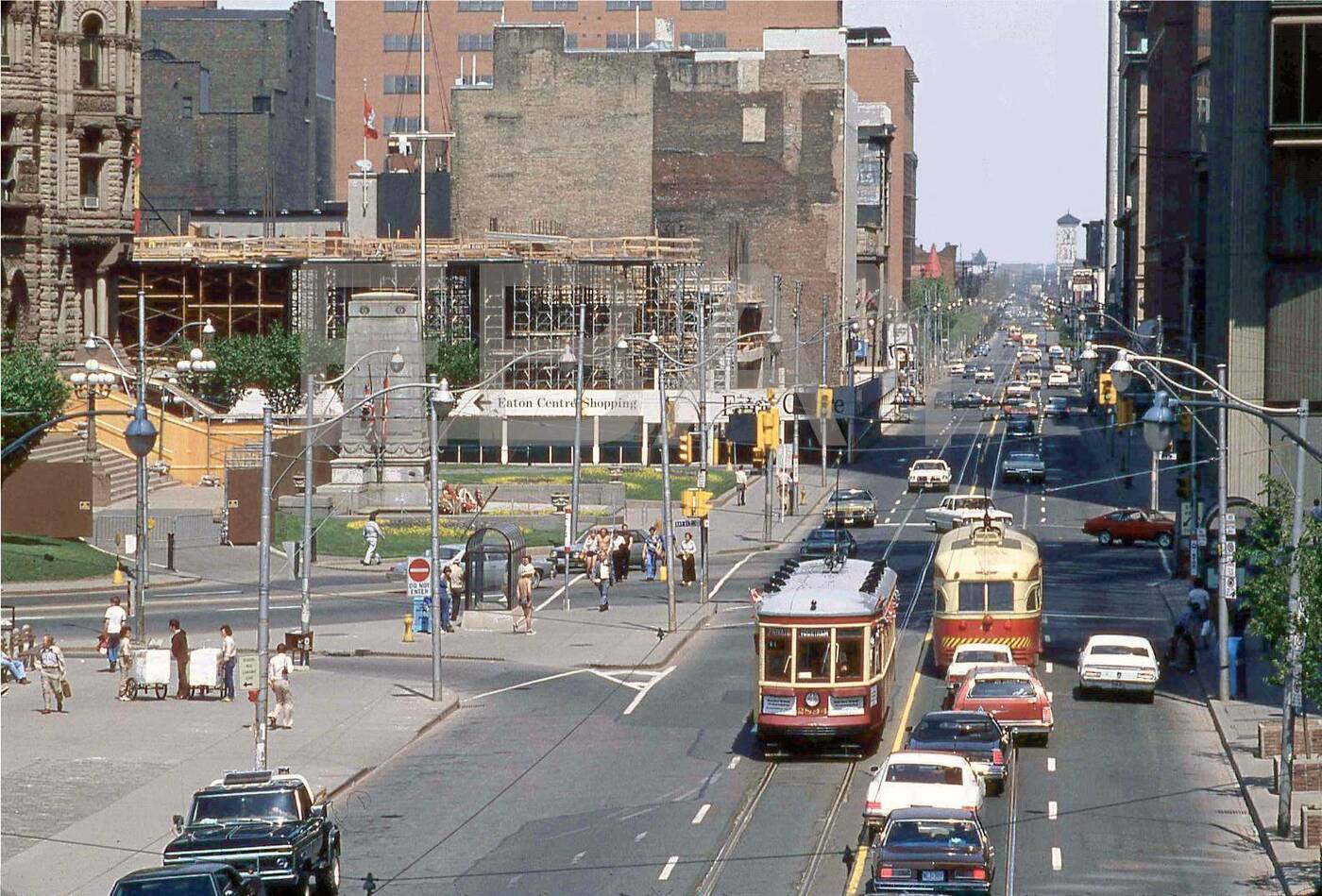 We're looking east across Queen St. at Bay with the former Eaton's complex being torn down to make way for the modern shopping centre that we know today. It's amazing to see how many Peter Witt streetcars were still on the road in the 1970s. Look for the sky bridge in the contemporary view. 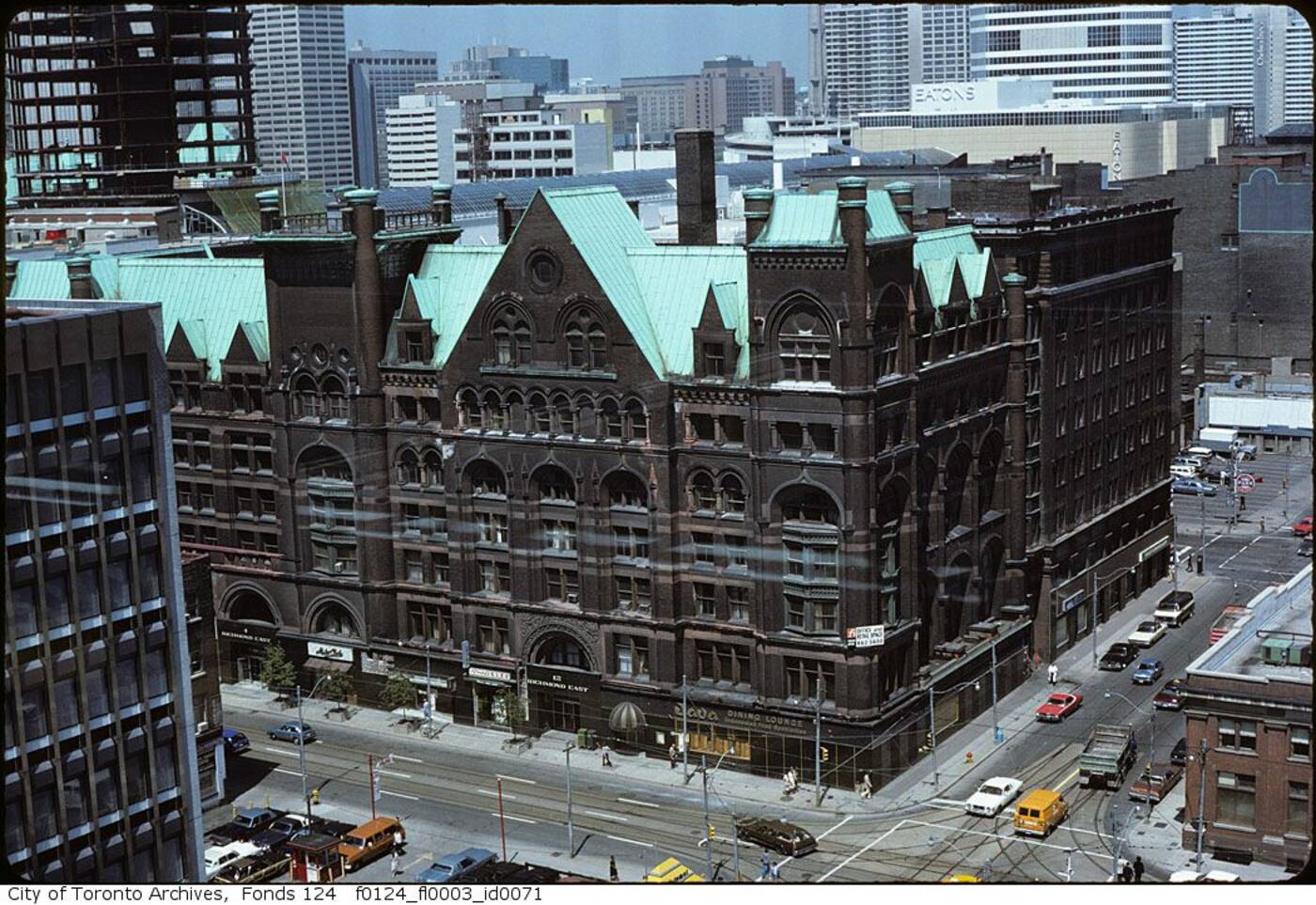 If you ever doubt that the city was more brown and weathered in the 1970s, just take a look at the Confederation Life Building. This building is actually red in tone. A fire almost destroyed this amazing example of Romanesque Revival architecture in 1981, but it was saved before being integrated with a new structure. Here's a similar view from today. 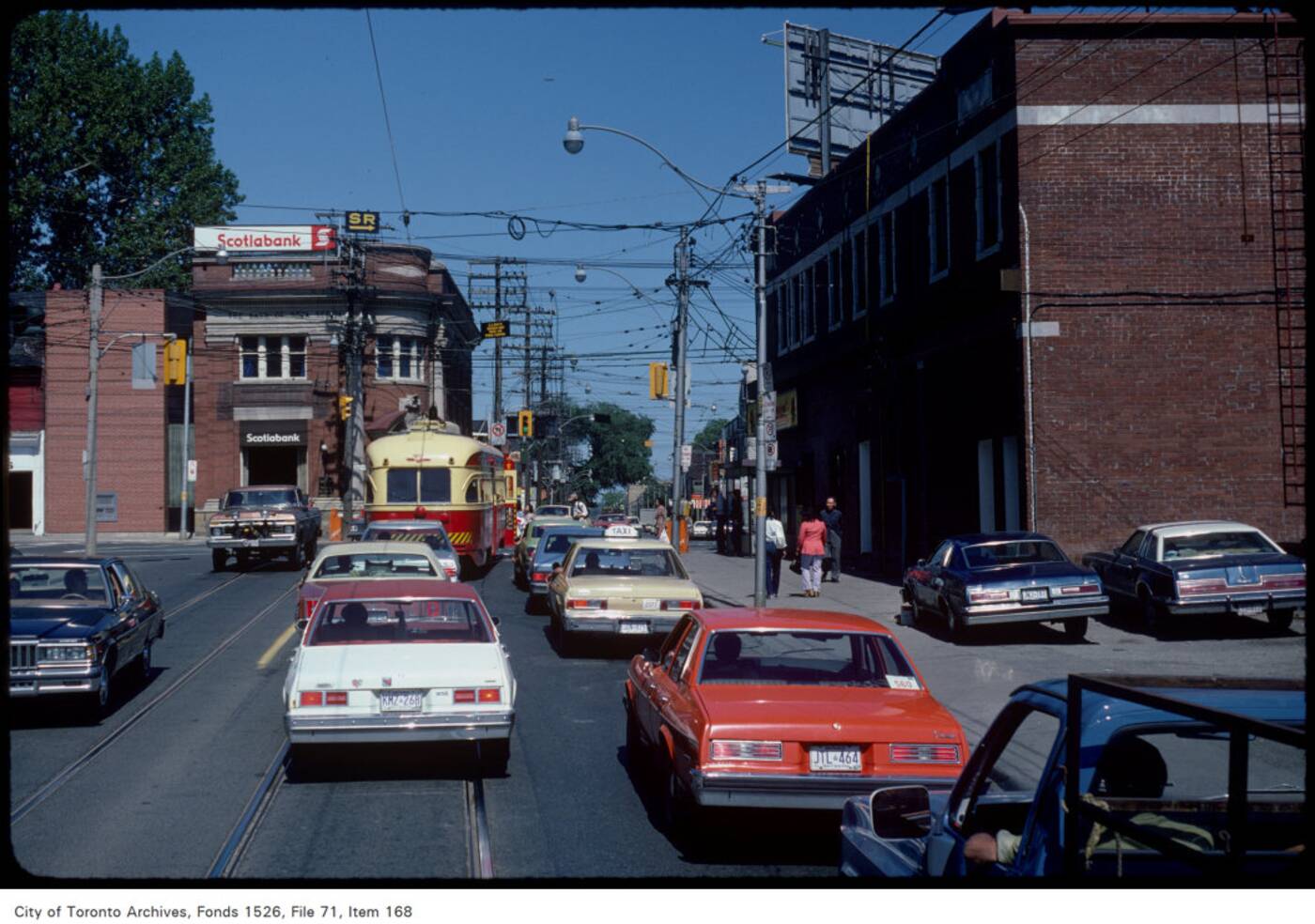 A sea of huge cars inches its way towards Broadview heading eastbound along Gerrard. Aside from the vehicle models and street furniture, this view has remained pretty much the same for around a century. This is what it looks like today. 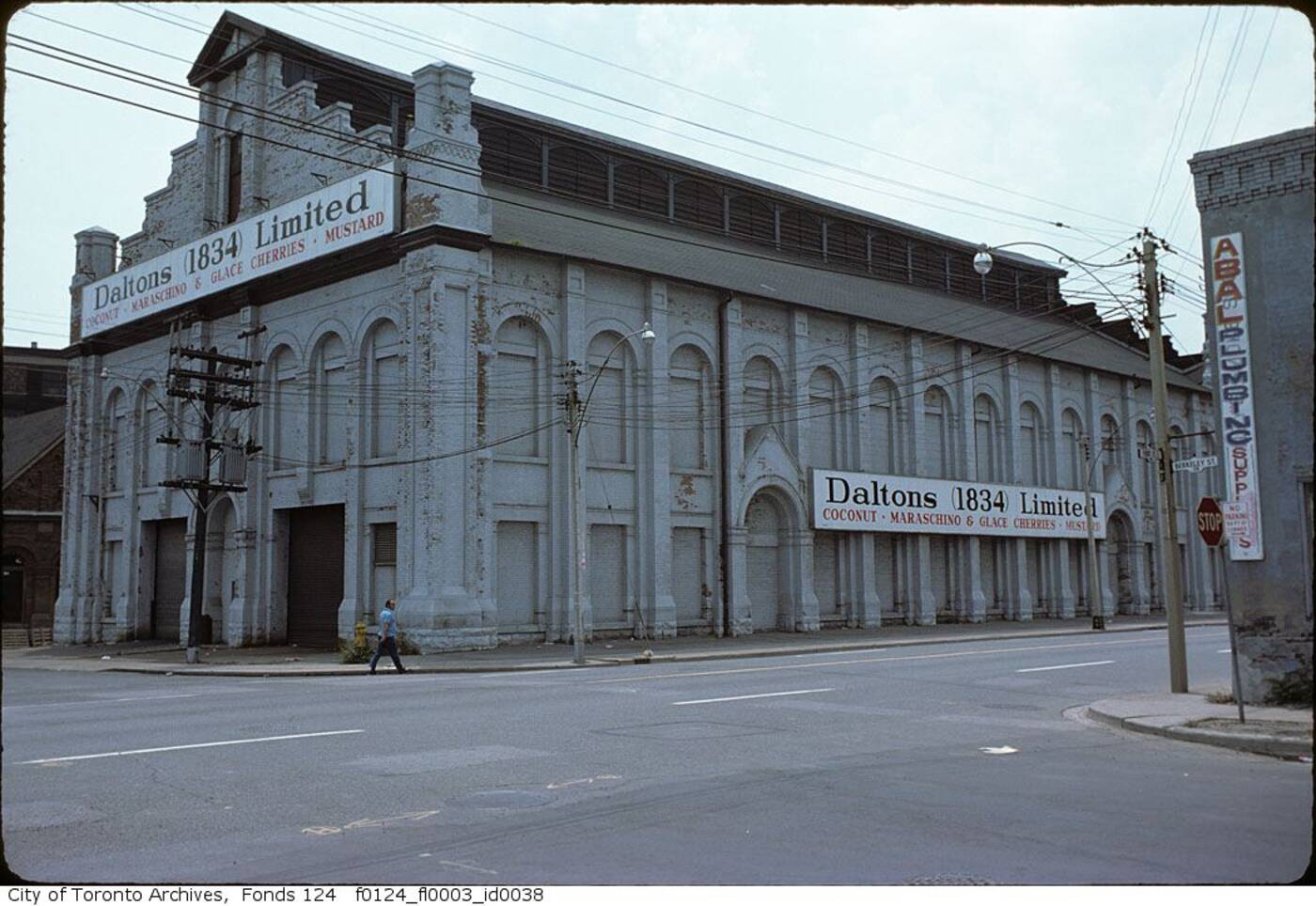 While hordes of historic buildings were lost during the 1970s, there are noteworthy exceptions that escaped the wrecking ball, including this grand old structure that was once part of the Consumer's Gas complex. It's now part of the Canadian Opera Centre. Here's the contemporary view. 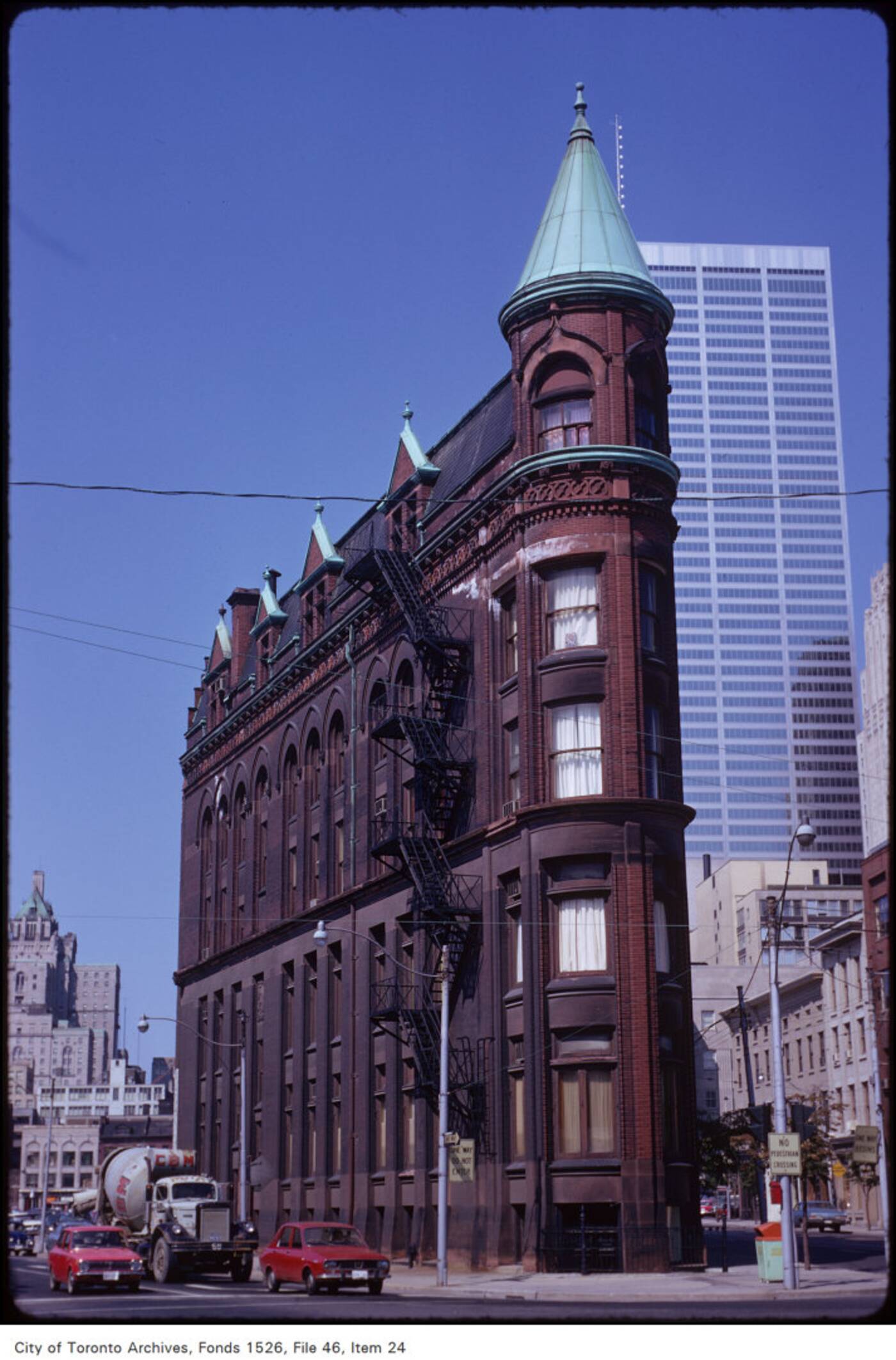 Toronto's Flatiron building wasn't immune from the years of coal burning, and started the 1970s looking heavily stained. Restoration efforts would be undertaken in 1975, which scrubbed off some of the soot and exposed the gorgeous brick exterior. Here's the view today.