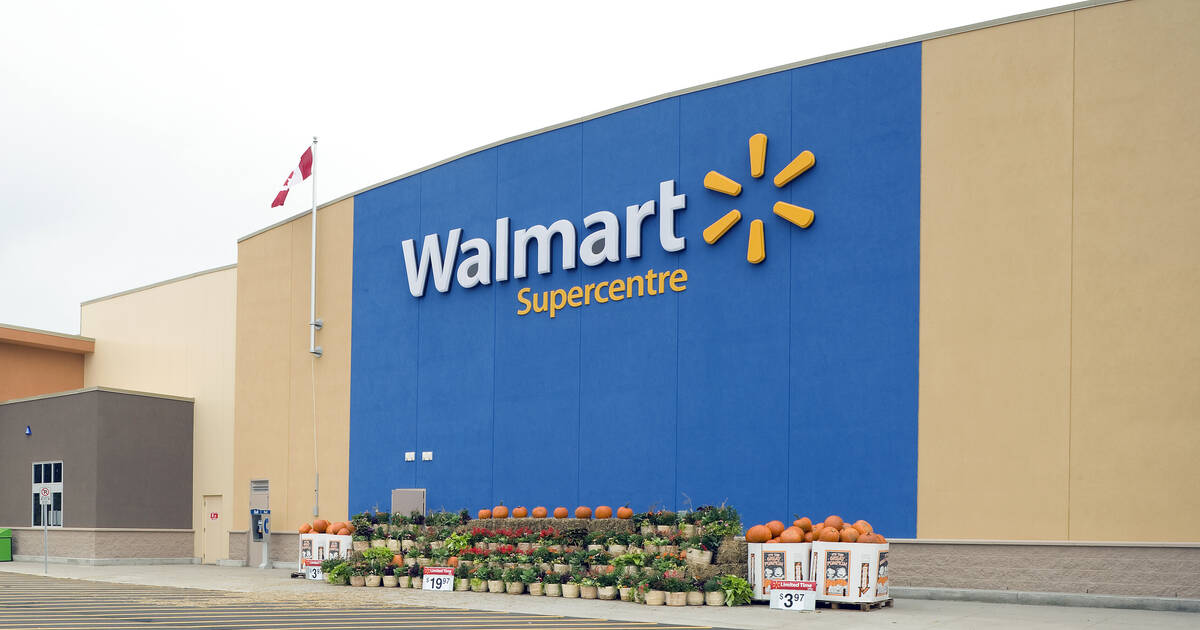 Yet another master-planned, mixed use community is in the works for our fast-growing city of neighbourhoods — this one, in Scarborough's Golden Mile, right along the game-changing Eglinton Crosstown LRT.

The area has since evolved into a largely commercial neighbourhood with tons of surface parking and plenty of what the city calls "large-format retail buildings" (read: big box stores).

With the Eglinton LRT set to be complete in 2021, bringing enhanced public access to the region, City of Toronto planners have been looking for ways to revitalize the Golden Mile into a vibrant, mixed-use community capable of keeping up with Toronto's exponential rate of growth — and developers want in. 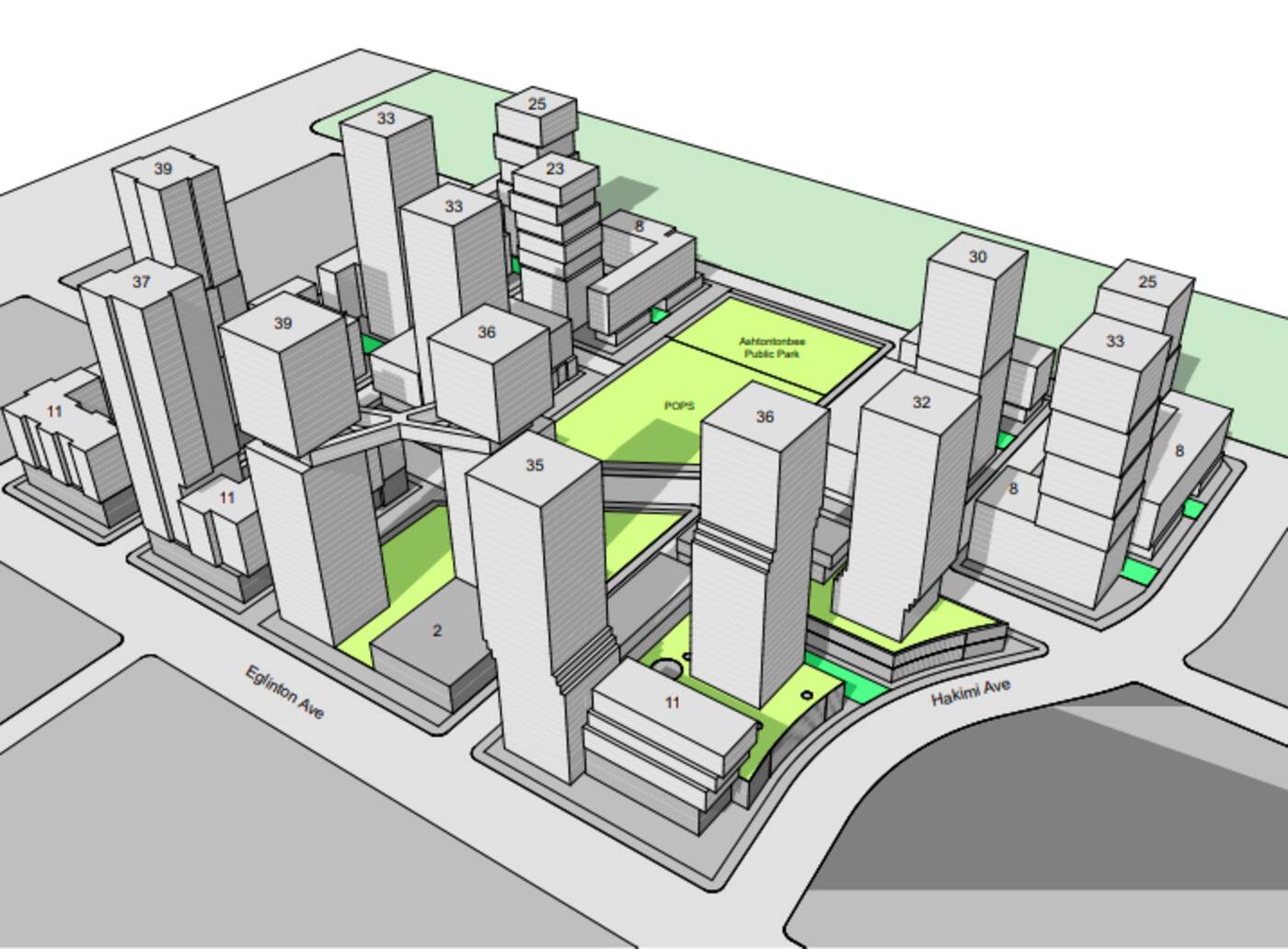 A total of 14 residential towers will rise from 23 to 39 storeys high, while all other residential buildings will be mid-rises of eight storeys or less. Image submitted to City of Toronto.

Plans were submitted to the City of Toronto earlier this month for a brand new neighbourhood at 1900 Eglinton Avenue East, current home to a Walmart Supercentre, a Winners, a Starbucks, a smattering of other chain outposts and a massive parking lot.

Bordered by Eglinton Avenue to the south, Ashtonbee Road to the north, Hakimi Avenue to the east and some private corporate properties to the west, the area is huge at more than 28 acres, total.

The application from SmartCentres seeks permission to build a whopping 5,529 residential units across 11 distinct blocks atop the space, in addition to more than 200,000 square feet worth of retail space and nearly 7,500 square metres of office space.

The architectsAlliance-designed hood would feature 23 buildings in total, but also plenty of POPS and public space, including a large central park and a green "landscaped spine" running along Golden Mile Boulevard. 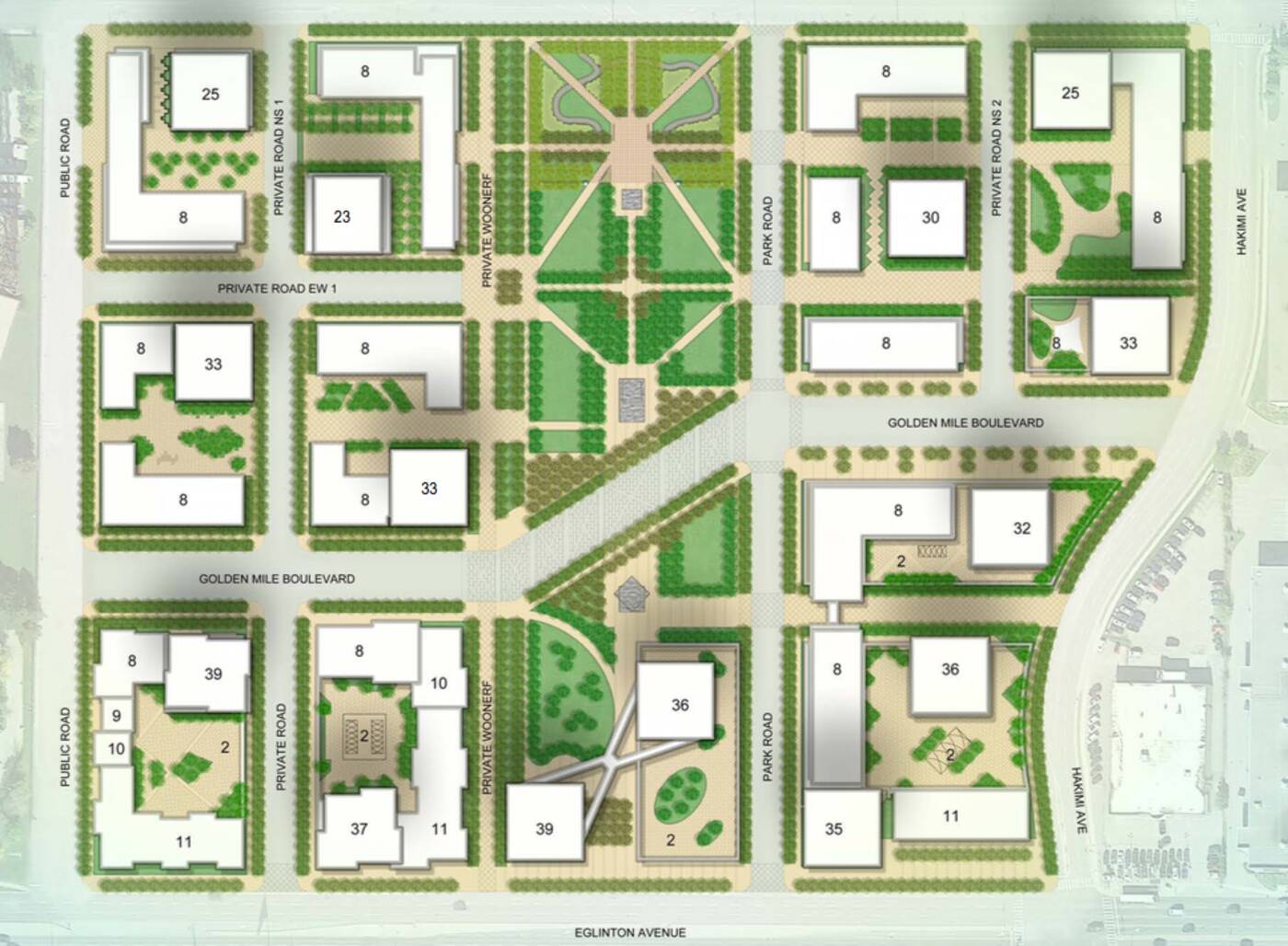 "A large component of the Master Plan area will be devoted to open spaces, with over 1.7 hectares (4.2 acres) proposed," reads a planning rationale document submitted to the city on August 20.

"The proposed open space network throughout the Master Plan builds upon the City's green space network to the north and is utilized to create a level of porosity to help break up the size of blocks within this portion of the Golden Mile area."

Landscaping, street features, public art and "active building facades" will pay homage to "the history and legacy of the Golden Mile's role in the development of the City’s industrial industry."

Courtyards and parks and will contribute to "an animated street life," giving residents and visitors alike places to congregate, shop, dine and exercise outdoors.

The development is only in its planning stages at this point, but a considerable amount of work has already gone into its design.

Should everything be approved as outlined, that hulking Walmart would evenutally be knocked down for apartments, public streets and state-of-the-art parkland.

by Lauren O'Neil via blogTO
Posted by Arun Augustin at 12:50 PM