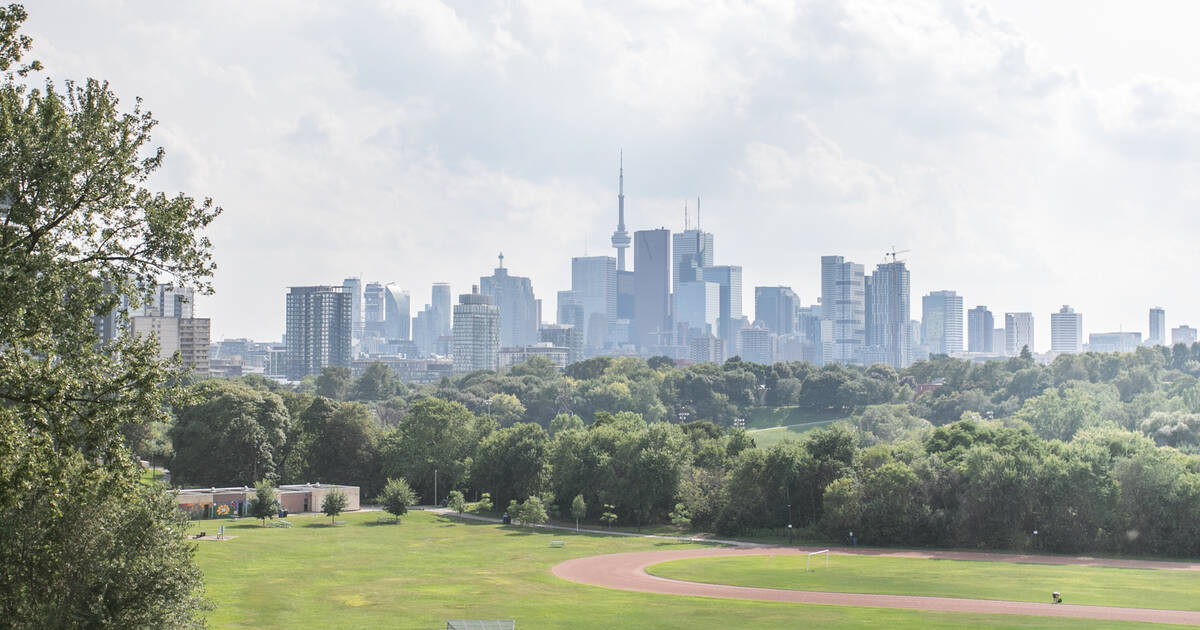 Riverdale Park is a sprawling green space that spans from one side of the Don River to the other.

Divided into two sections by the river and the Don Valley Parkway, Riverdale Park East is easily the more popular attraction with an expansive hill that slopes west from Broadview Avenue. 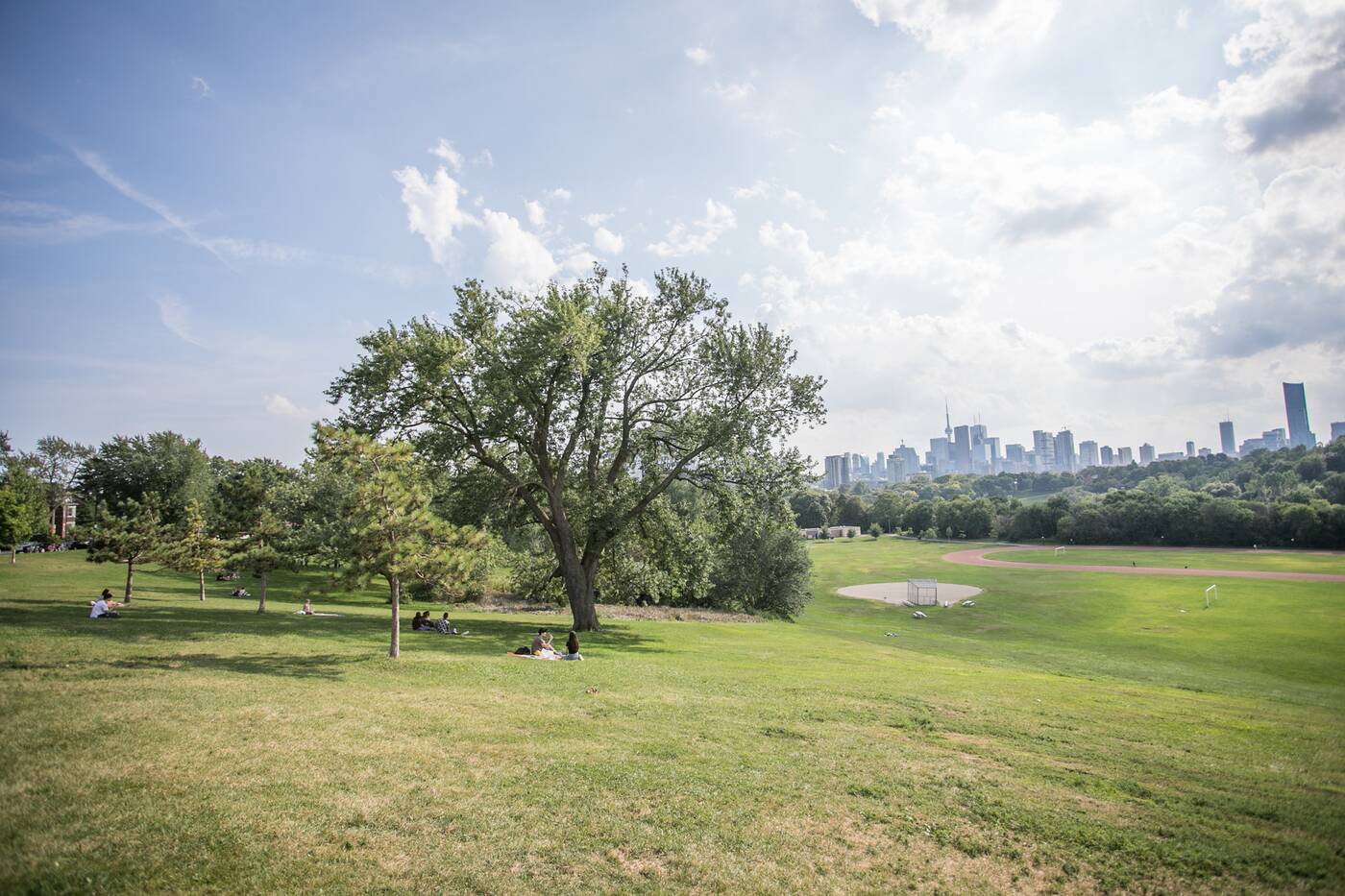 Riverdale Park is divided into sections, east and west of the Don River and the DVP.

It's from this vantage point that you'll find a pretty unforgettable view of the downtown Toronto skyline, especially for the sunset. 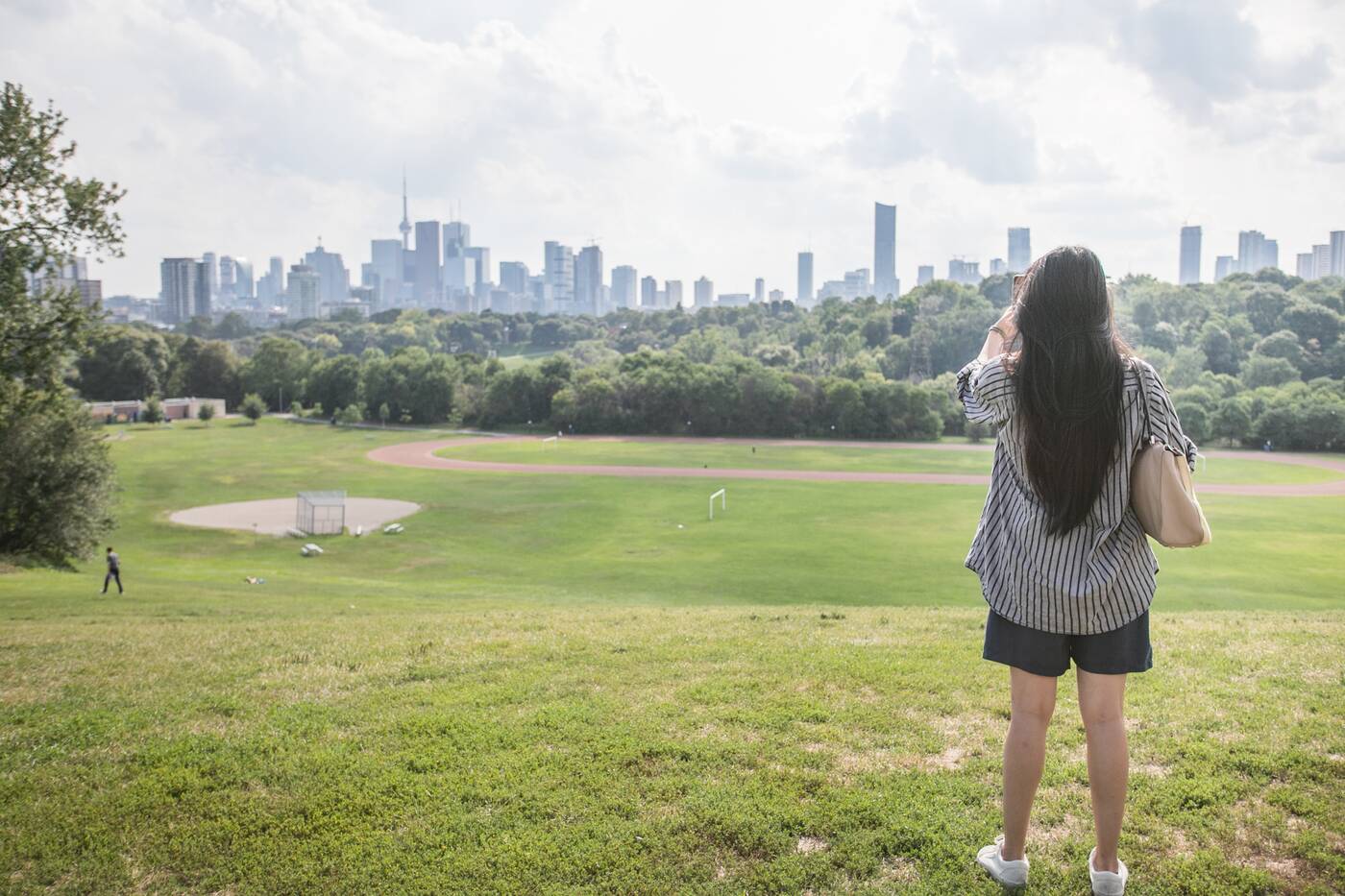 The park is a popular spot to admire Toronto's downtown skyline.

In the winter, this massive dip makes for the perfect tobogganing hill. 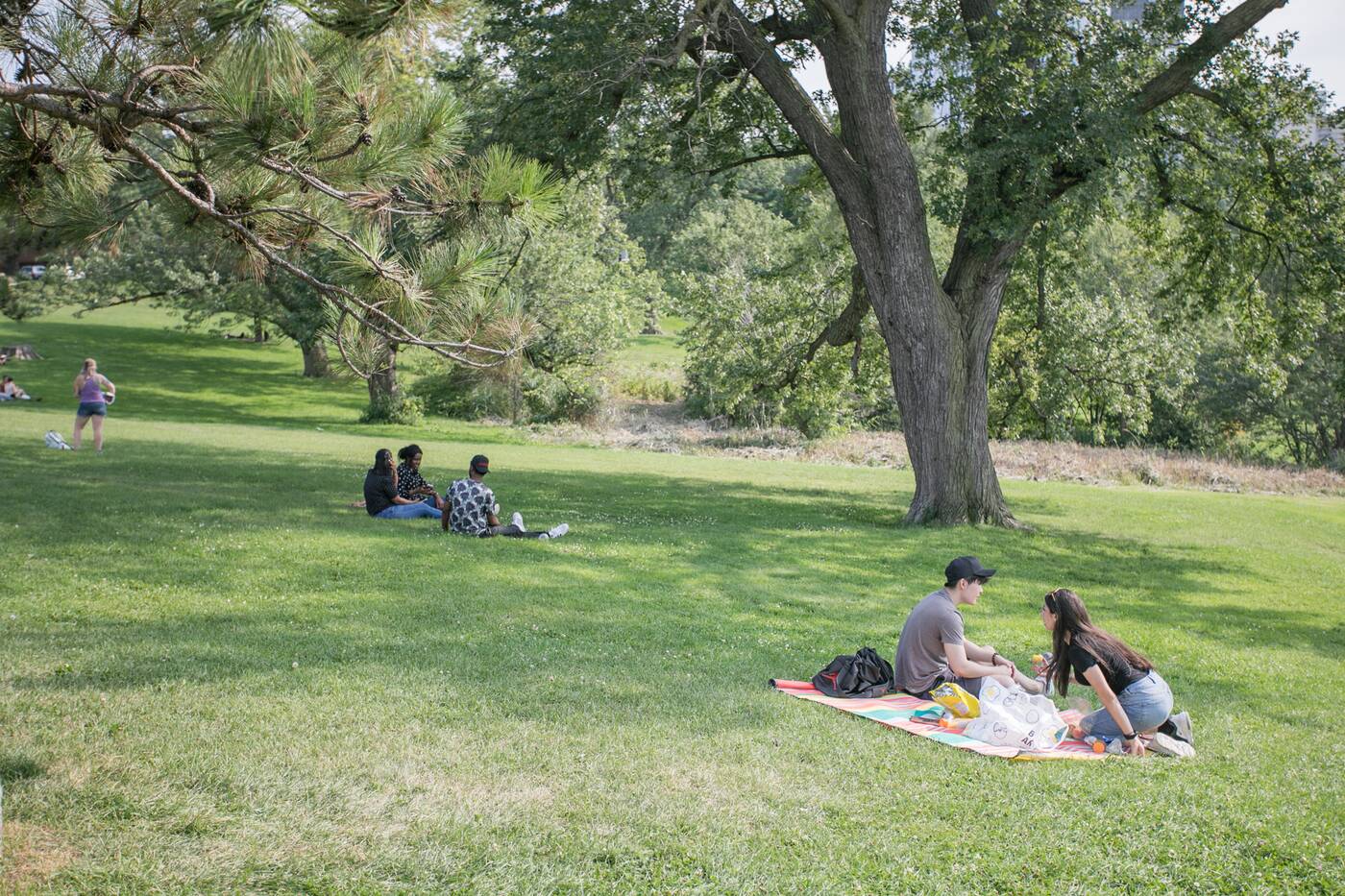 In the winter, Riverdale Park East is a popular destination for tobogganing.

During the summer, you'll find those living on the east side of the Prince Edward Viaduct flocking here to lounge in the shade of the trees or starfished out in the sun. 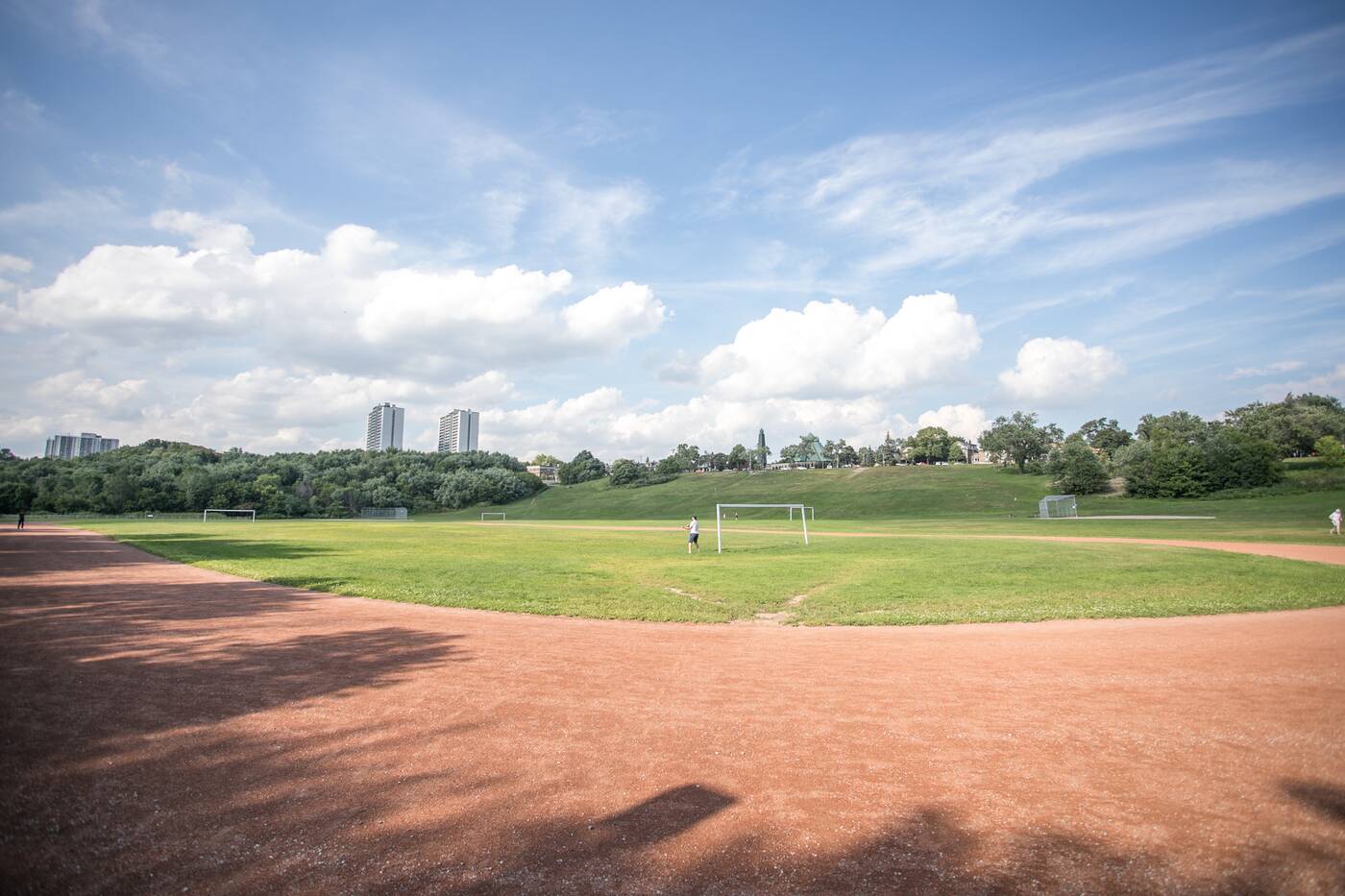 There are sprawling sports fields on both sides of the park.

In total, Riverdale Park takes over approximately 104 acres, the majority of which lies east of the Don. 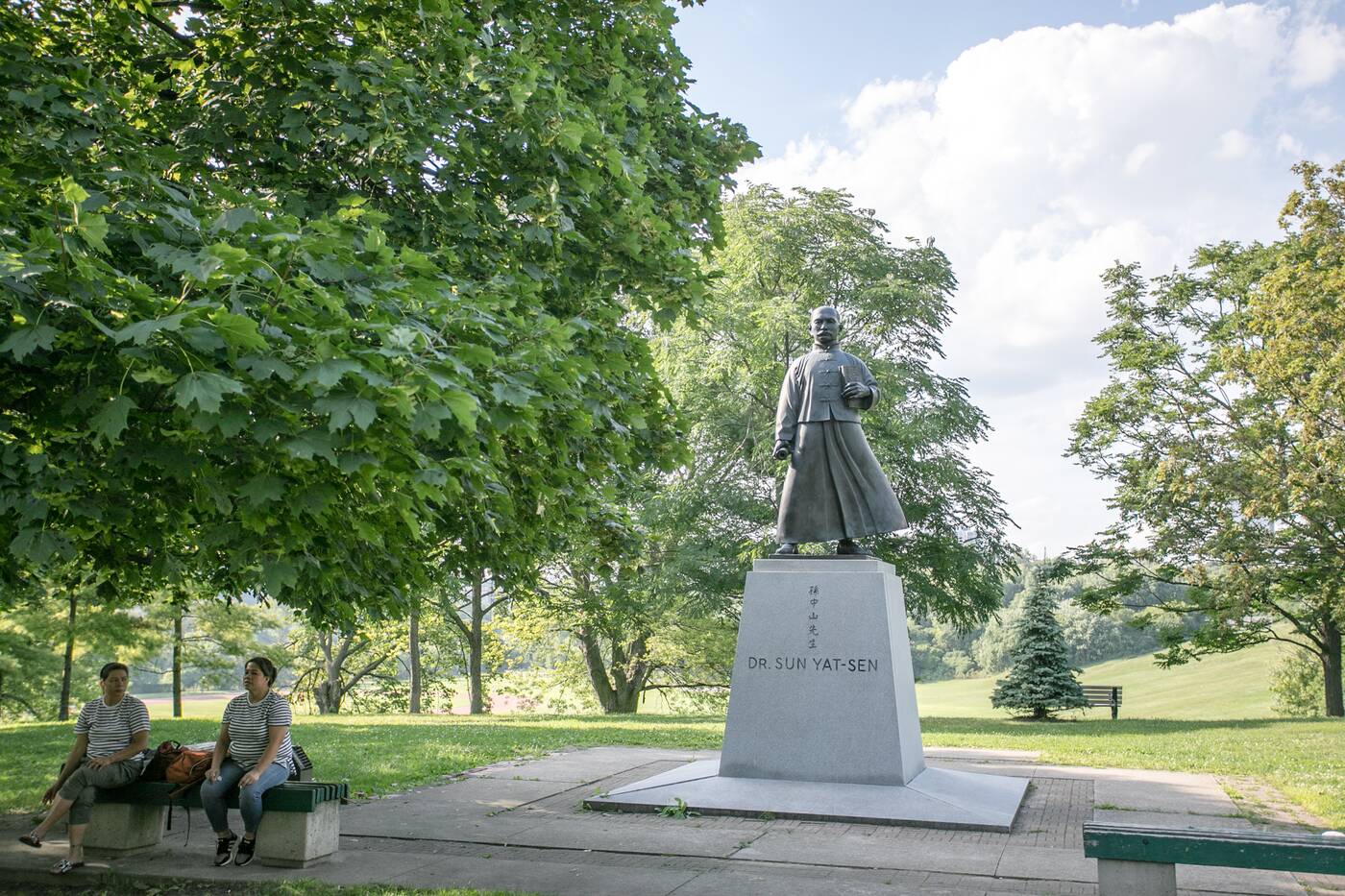 A monument of Chinese politician Sun Yat-sen sits on the southern side of Riverside Park East and serves as a homage to nearby East Chinatown.

Because of its size, the land has been repurposed several times for actual and proposed endeavours, including in the 1970s when it was scouted as the potential home for the 40,000 seat stadium that would become the SkyDome. 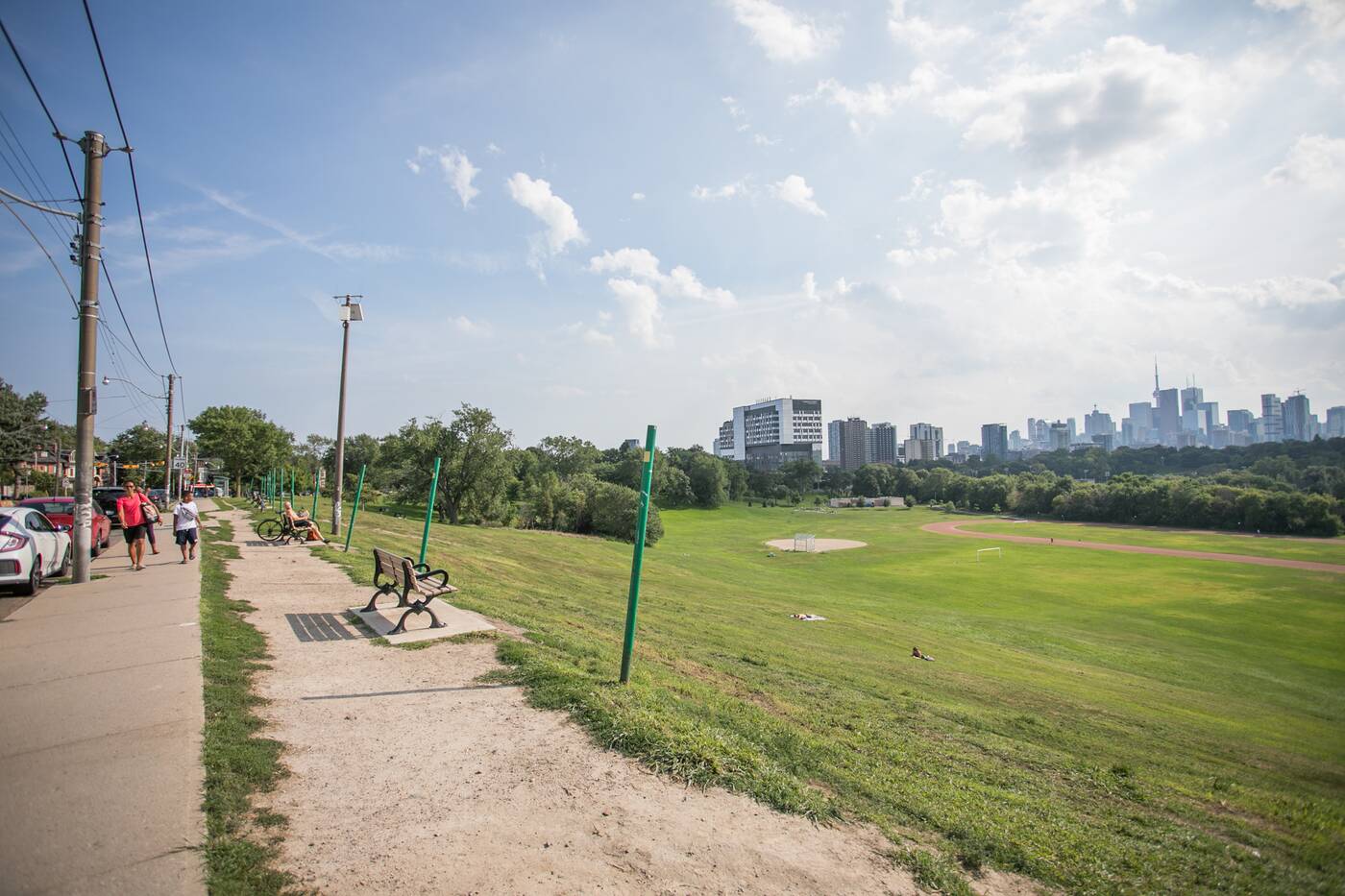 Green poles sticking out of the ground are actually exhaust pipes for methane gas.

Before then, it was a landfill until the 1920s. Walk along Broadview Avenue at the easternmost part of the park and you'll see a number of tall green posts sticking up out of the ground. 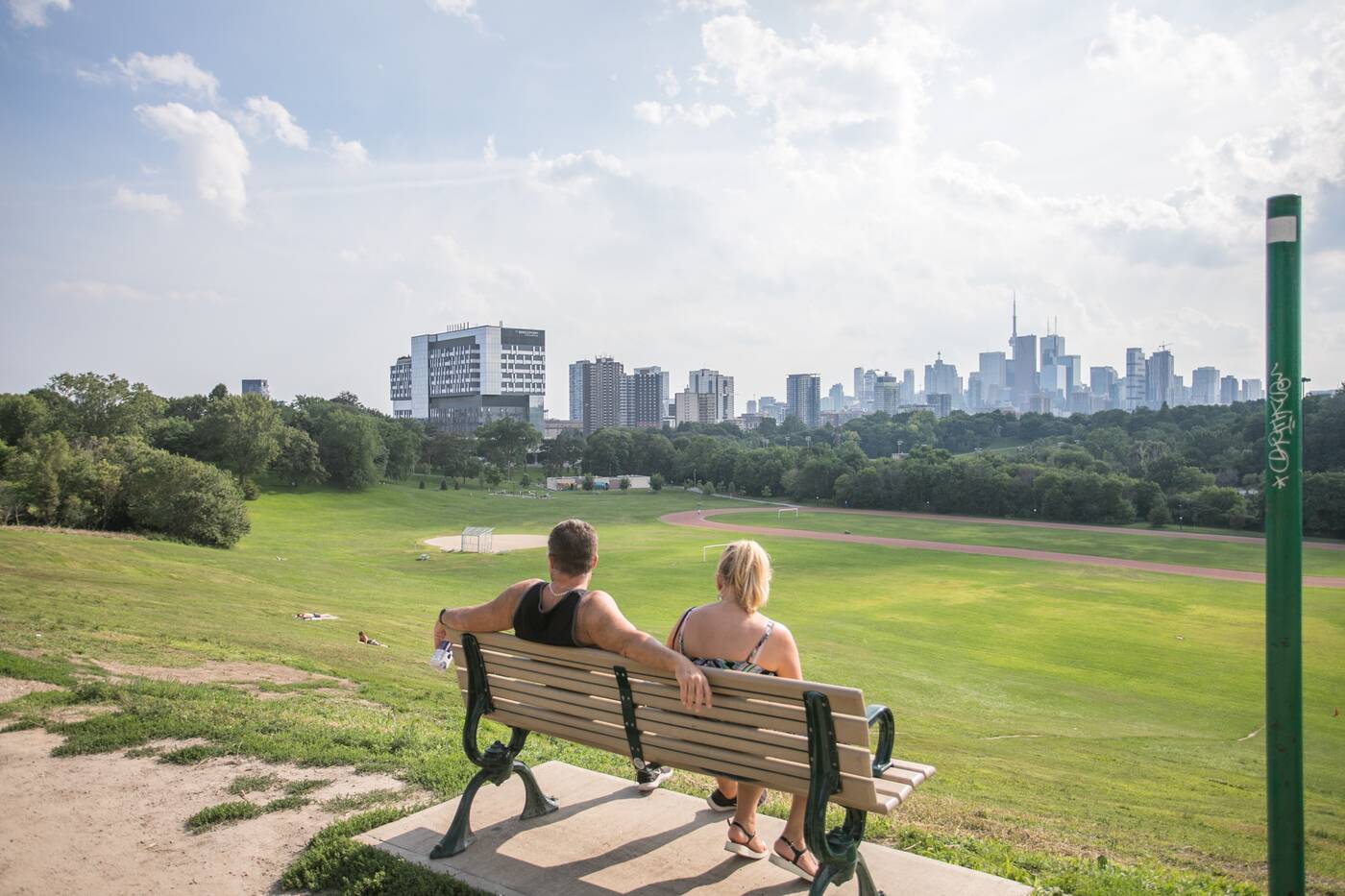 The park was used as a landfill around the turn of the twentieth century.

Those are actually exhaust pipes, which today are still subtly dispelling methane gas from the decades-old garbage that's buried underneath. 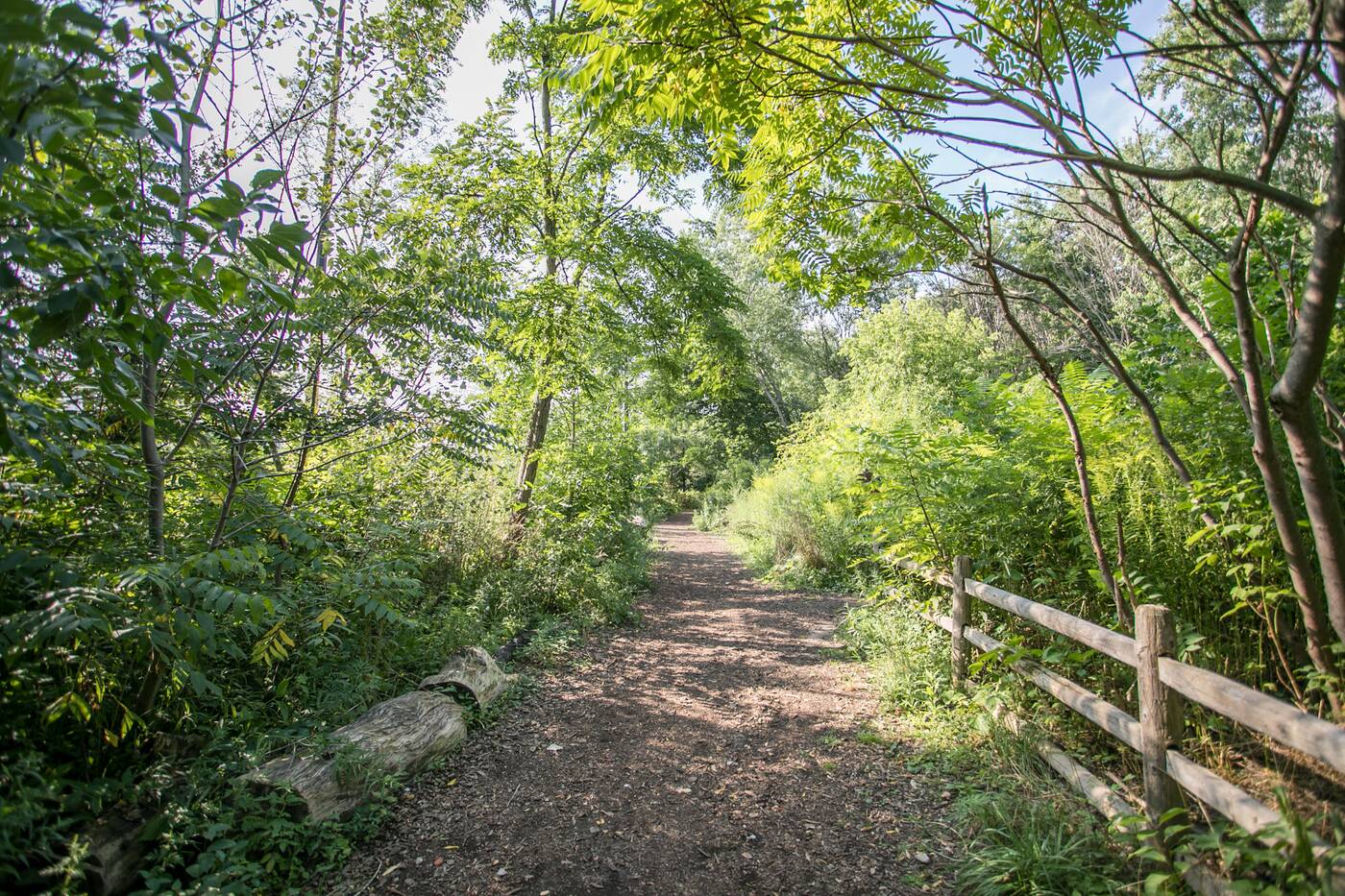 There are a few trails that have been maintained by the City and volunteers.

Once belonging to a man named John Scadding, an early colonialist, the land was divvied up between the grounds for the infamous Don Jail and a City-owned park in 1880. 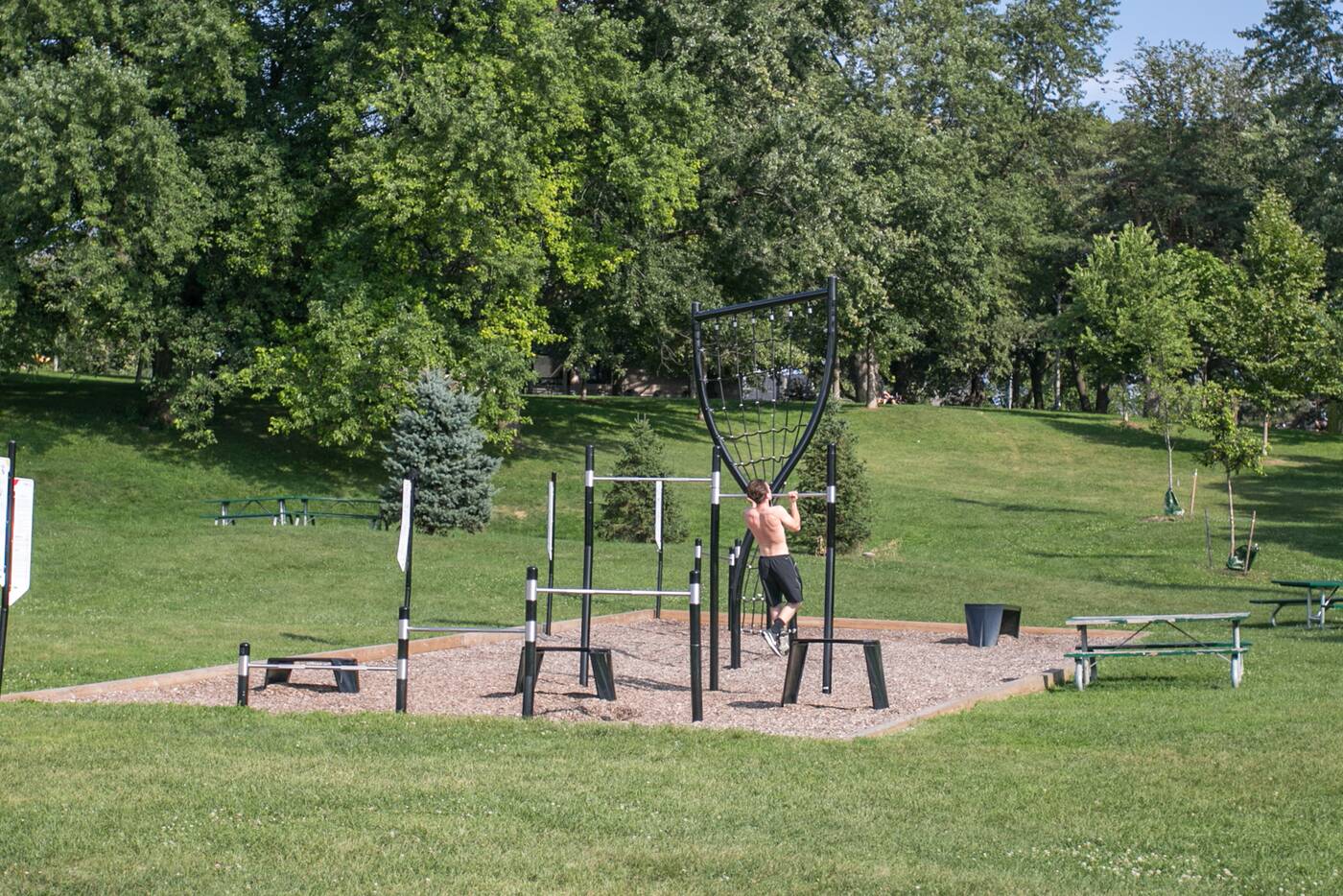 The park is also a popular spot for working out.

It wasn't until the 1960s that the park was monumentally divided by the construction of the DVP. 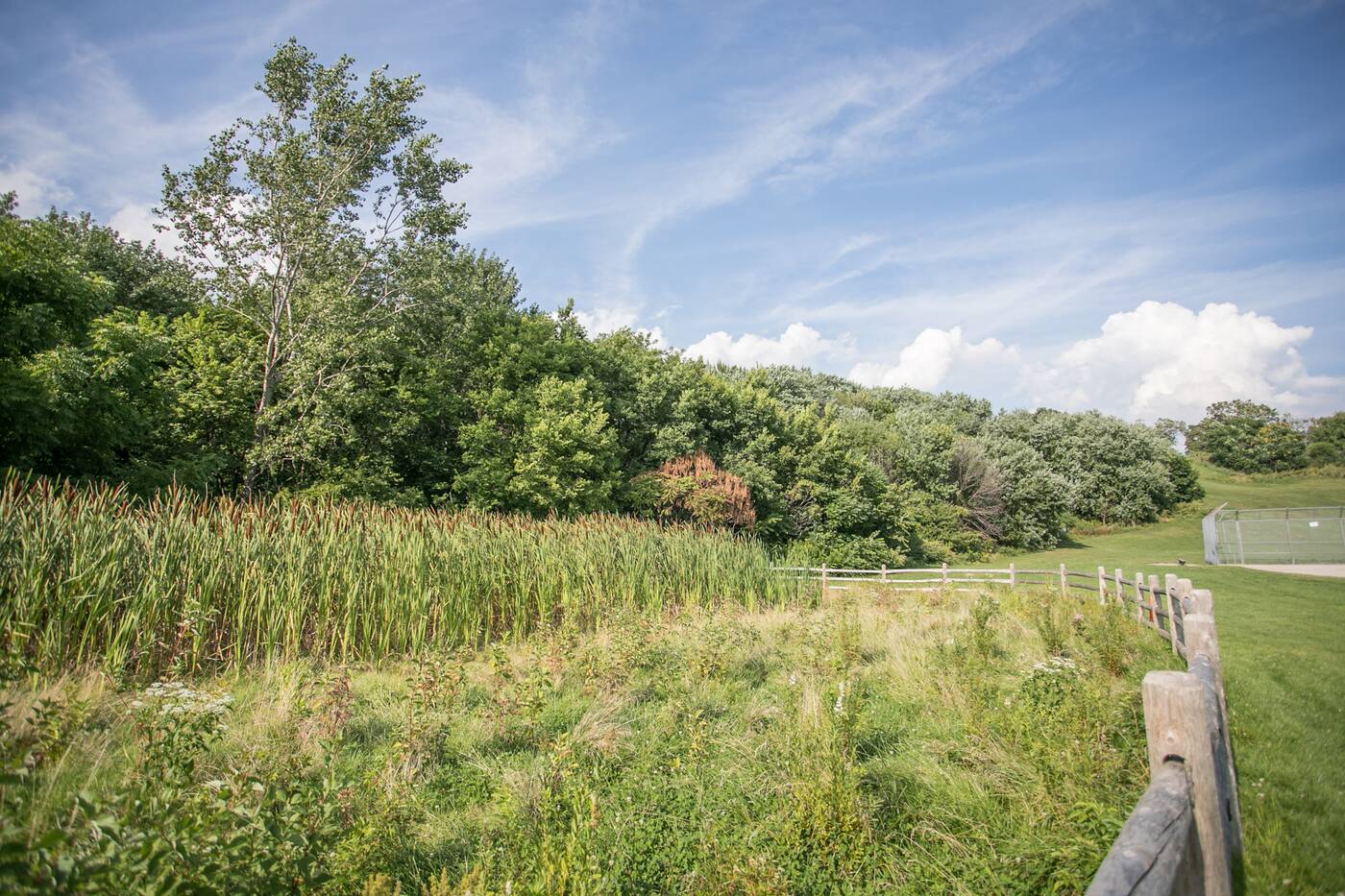 Efforts to maintain the Don River watershed saw the planting of many trees.

The northern part of the hill has also filled out with native trees and shrubs thanks to the City of Toronto and Bring Back the Don, a citizen task force that was dedicated to preserving the Don River's watershed and that helped to plant many maple and ash trees in 1990. 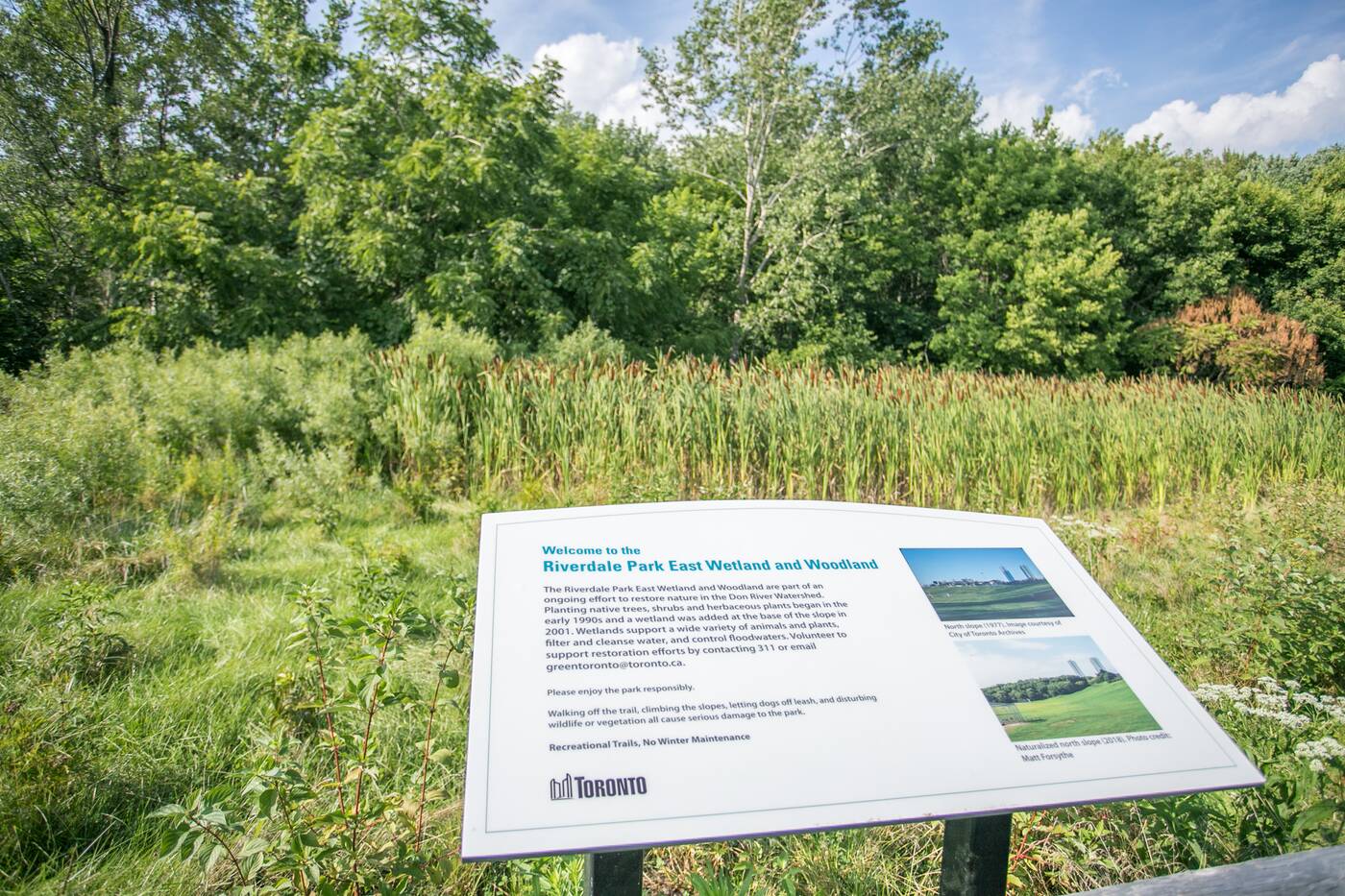 A marsh was also added in 2002 to help collect storm water. A plaque goes into detail about the marshes' contribution to the local ecosystem. 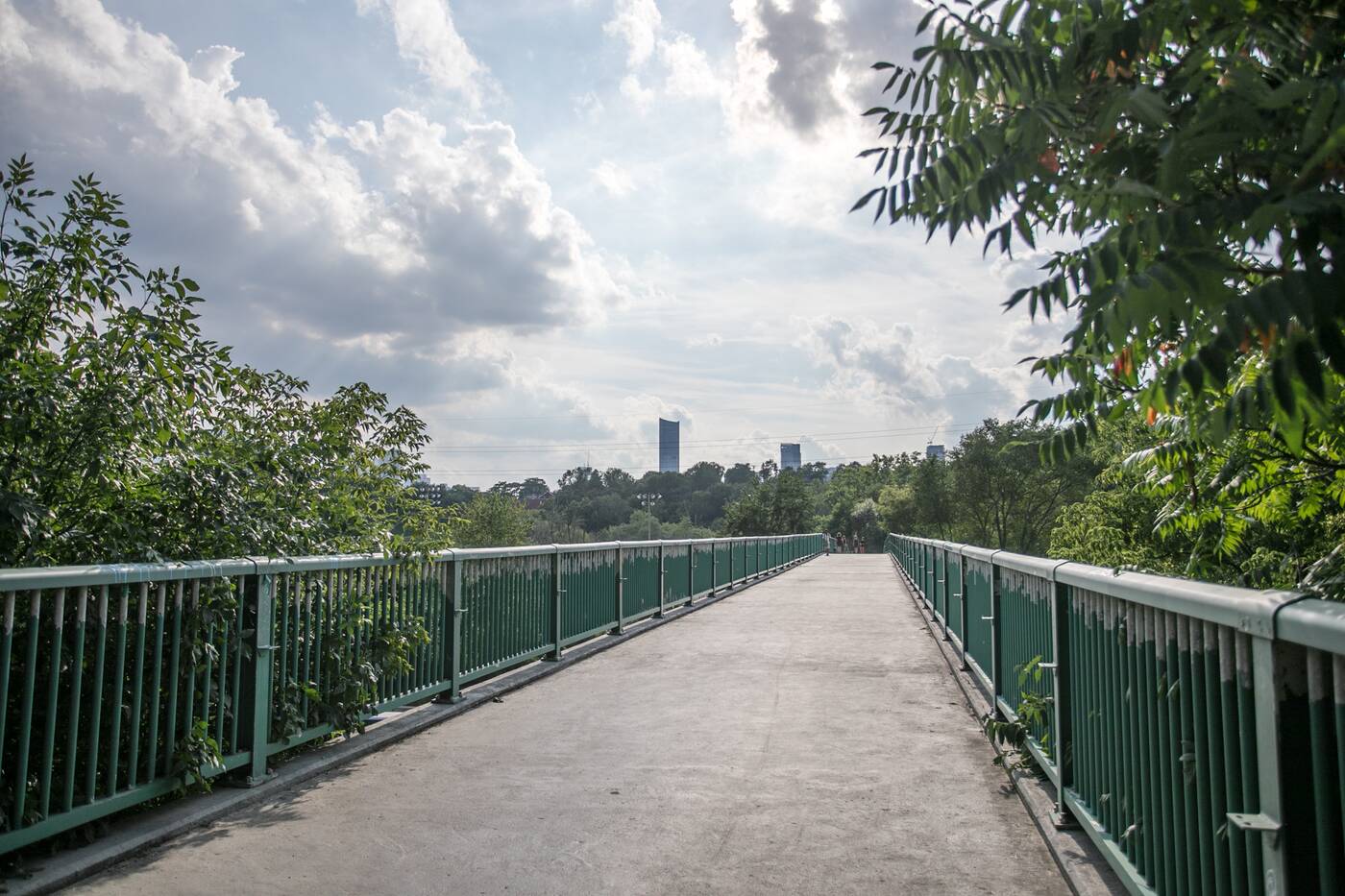 The Riverside Park bridge spans across the DVP, the Don River and the rail tracks.

Though both sides have enough field space for soccer, baseball and Ultimate Frisbee, Riverdale Park East is home to a running track, plus a pretty impressive gym for working out. 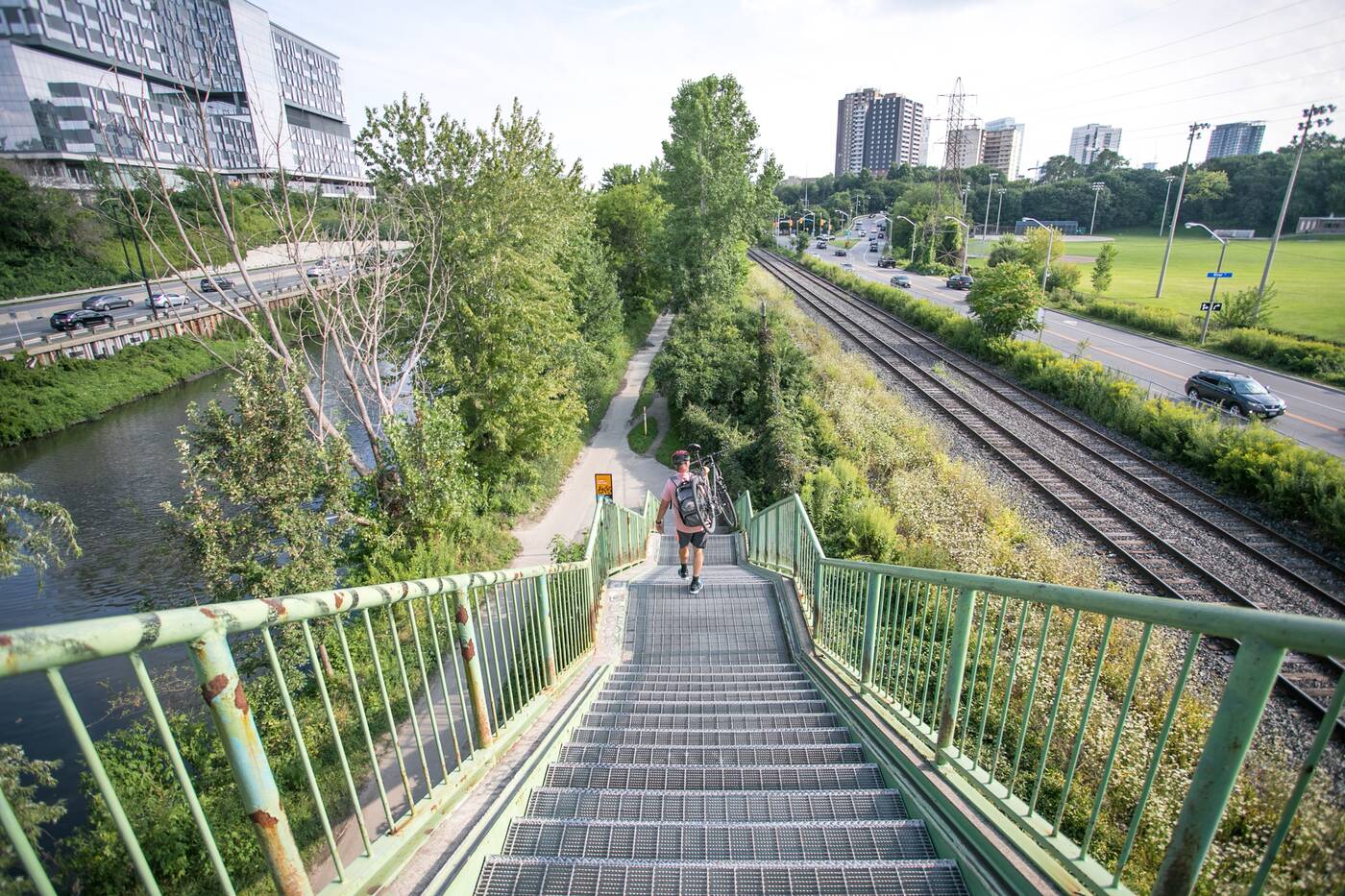 These stairs lead into the Lower Don River Trail.

Just north of Bridgepoint Hospital is where you'll find the green pedestrian bridge, which spans across the DVP and the rail tracks to Riverdale Park West. 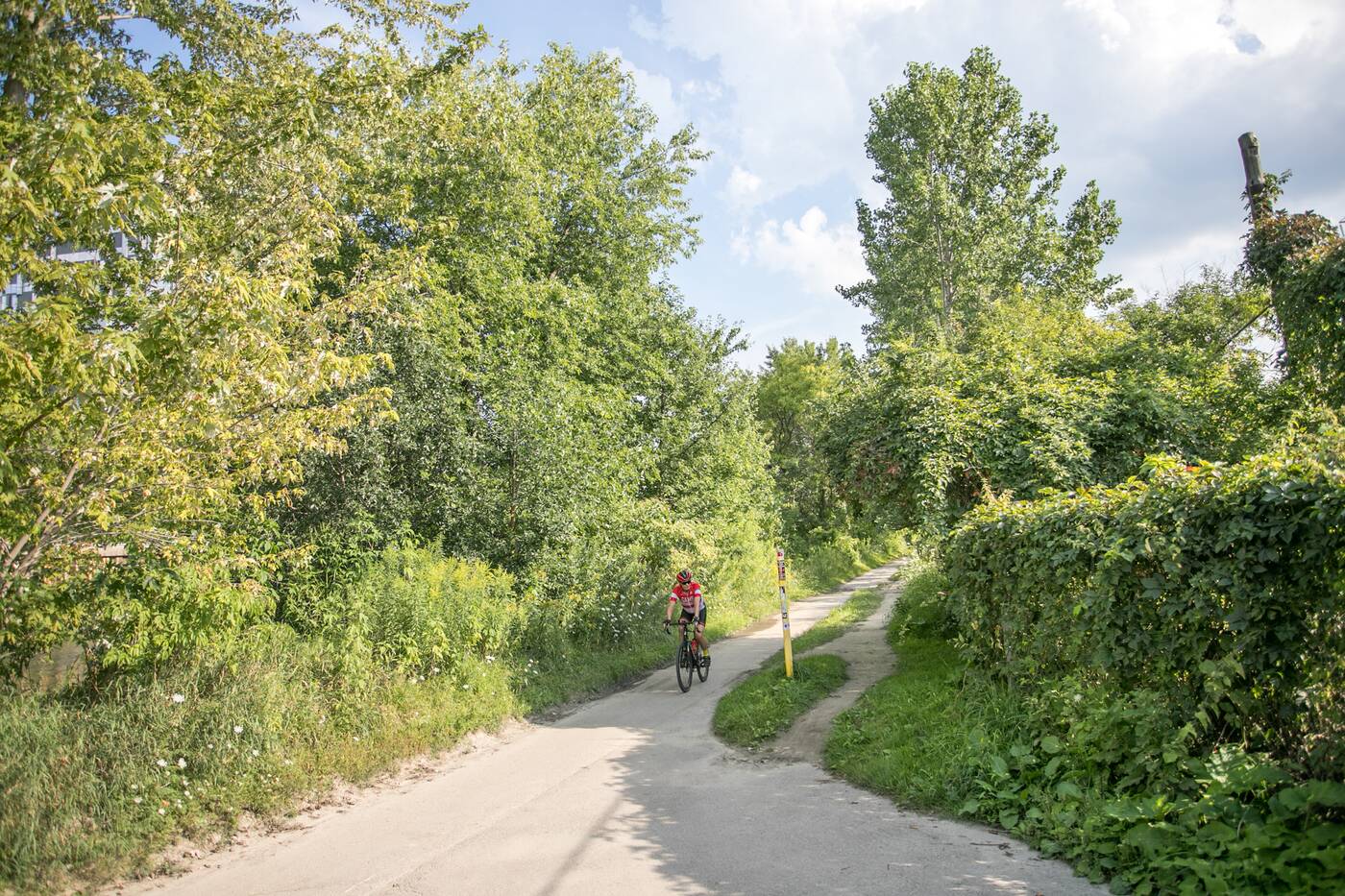 Follow the Lower Don River Trail to reach another small foot bridge over the Don.

Further north is a small footbridge, technically part of the Lower Don River Trail, which you can also hop onto from the west side. 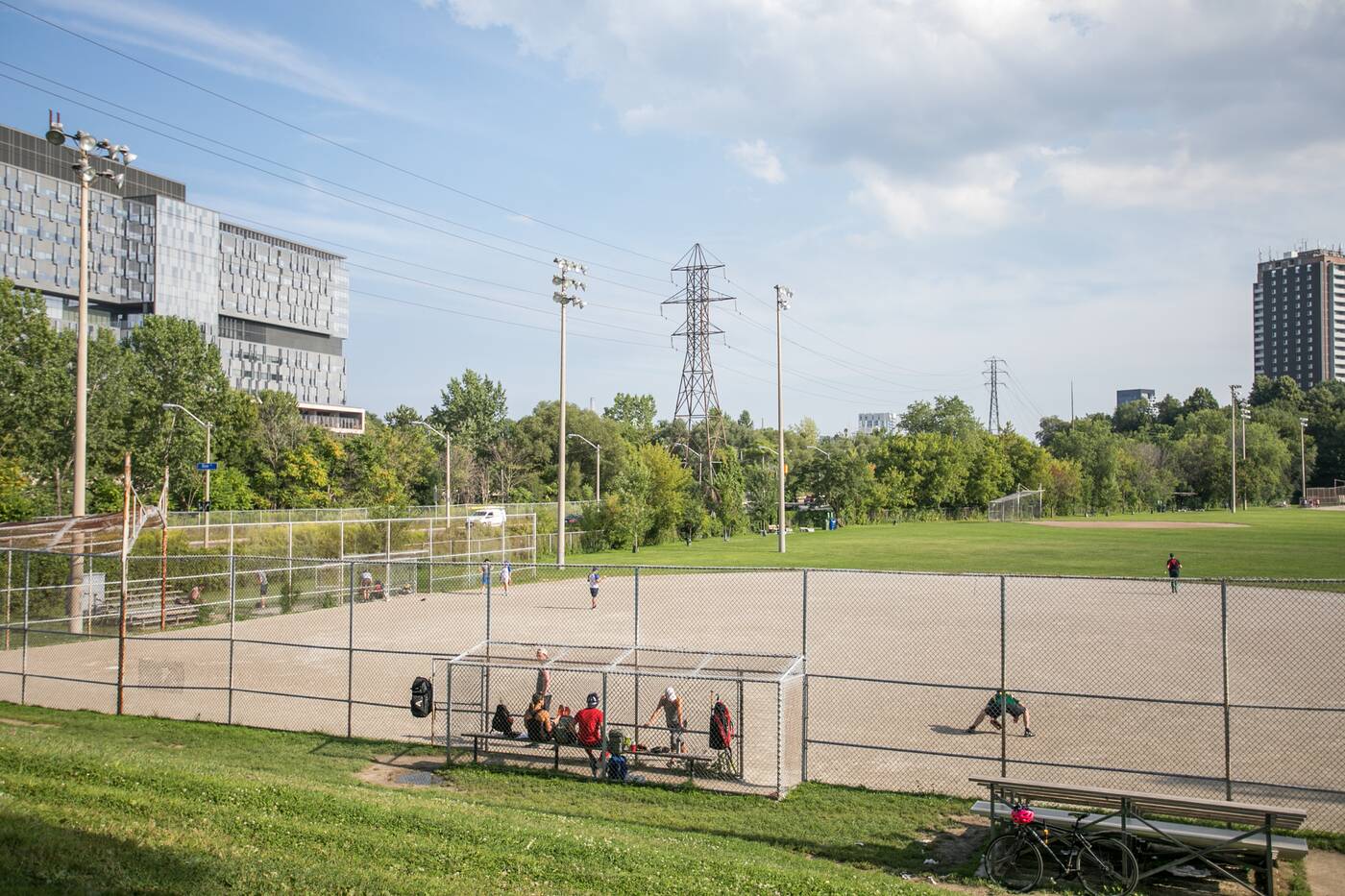 The Sam Pollock Baseball diamond is a popular spot for games.

Riverdale Park West is where you'll find the Sam Pollock Baseball Diamond, which is bustling at night with players and leagues.

Head further into the trails and you'll eventually find yourself at Riverdale Farm. 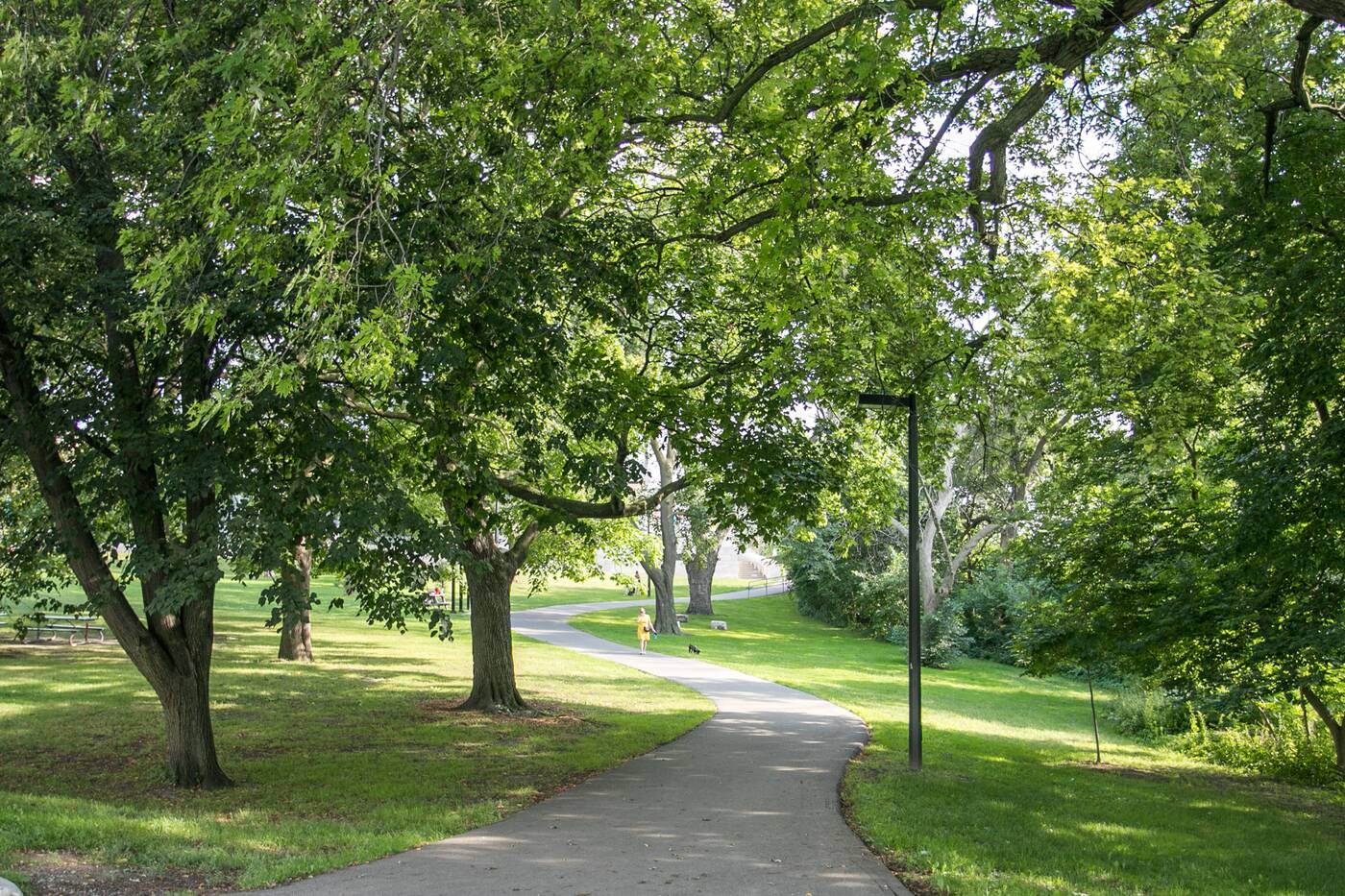