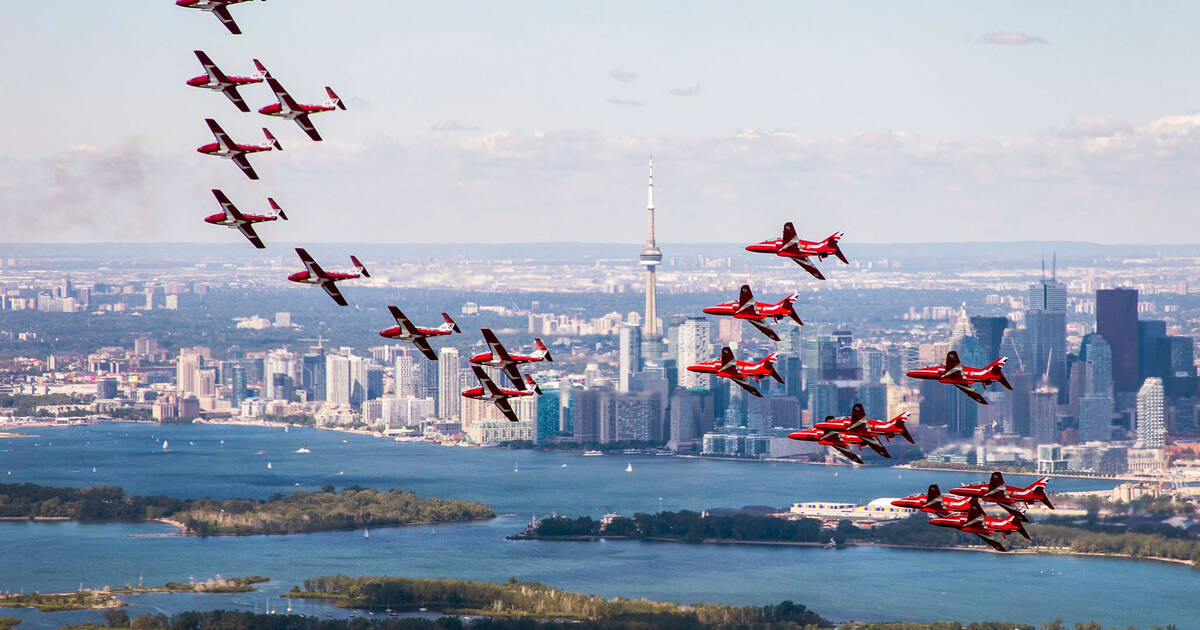 It's that time of year again, Toronto: The days are getting shorter, the kids are gearing up for back-to-school and only one long weekend stands between us and the month of September.

If you were already in your feelings about the CNE's arrival earlier this month, the late-August fair's departure will surely bring you down even more — and there's no way to ignore the fact that it's happening thanks to the resounding "whoosh" of fighter jets.

You know summer is almost over when you hear planes rehearsing for the air show. #Toronto #airshow2019

With the last weekend of the CNE comes the annual Toronto Air Show, now in its 70th year.

Here's everything you need to know about the 2019 #Toronto Air Show at the #CNE https://t.co/TsZzy79G7a #LetsGoToTheEx pic.twitter.com/qHSp1IPCJ4

Members of the Red Arrows, the Canadian Forces Snowbirds and other famous aviatory athletes will take to the skies every day between August 31 and September 2 from noon until 3 p.m.

It will be loud, as you well know if you've lived anywhere within roughly a 3-kilometre radius of Exhibition Place during this time of year.

It's already quite loud as of Friday with pilots practicing overhead and, despite the fact that it doesn't officially kick off until tomorrow, Toronto residents are already expressing their disdain for the air show.

"People griping about the air show on Twitter" is a legit thing that we've come to expect...

The best display of the routine selfish, tone-deaf attitude of basic Toronto inhabitants can always be found at the Air Show. Shut that shit down.

And, in some cases, make fun of.

It's that time of year when white Toronto nimbys tell everyone what's best for refugees without consulting a single refugee.

It's the Toronto Air Show!!! pic.twitter.com/OpCymOlQvF

Many critics assert that the airborne event glorifies war weaponry.

Military aircraft overhead. It reminds me of Yemen. But it’s just Canadians celebrating their war machines at the Toronto Air Show.

Others raise concerns about the noises and how they might be perceived by those who aren't aware of the air show's existence.

Also Toronto: Please enjoy the air show that doesn’t at all sound like bomber jets are descending upon Damascus!

Others still worry about their pets, many of whom hate the incredibly loud noises of planes zipping overhead.

Dogs of Toronto, you will get through this Air Show I promise pic.twitter.com/GPdvE46ToQ

And yet, for all of its detractors, the airshow still has plenty of support among both organizers (clearly) and members of the public.

Piss off you, Air Show is a huge Toronto tradition.

"I grew up around air bases and this is an opportunity for talented men and women to show the results of their practice, dedication and skills in a setting where they aren't rescuing your lost loved one, or being shot at."

The 2019 Toronto Air Show starts tomorrow at noon. Unless you're far from the downtown core or hiding in a basement, you really can't miss it.