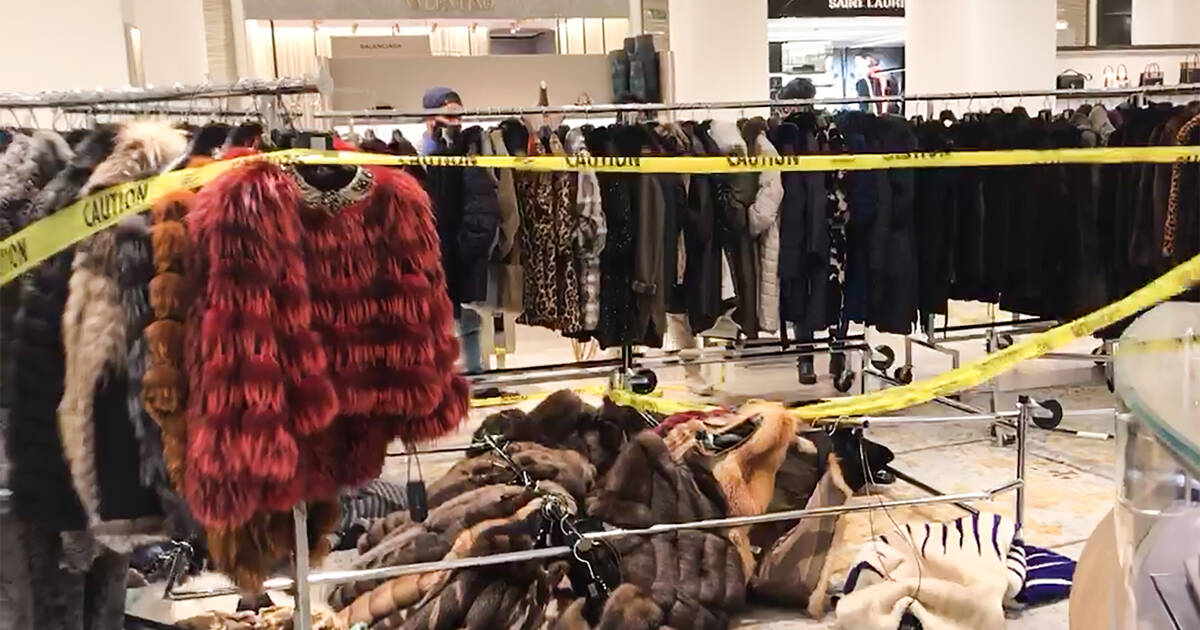 An anti-fur protest inside a swish downtown Toronto department store went sideways this weekend — quite literally — when a store employee tried to take matters into her own hands and shut down the demonstration.

Members of Fur Free Toronto, a coalition working to "end the atrocities of the fur industry and seek a ban on fur in Toronto," had planned on wrapping yellow caution tape around several racks of fur coats at the Sak's Fifth Avenue store on Yonge Street, across from the Eaton Centre.

Things were going off without a hitch just before 3 p.m. on Saturday, when protest organizer Jenny McQueen began livestreaming the event on Facebook.

Demonstrators could be seen walking peacefully around the "75 % off furs" display at Sak's, wrapping it gently with caution tape, when an apparent employee got inside the display and tried to pull the tape down.

The action caused the racks to tumble on top of each other like dominoes, giving the protesters pause.

"That... was not us," said McQueen to livestream viewers. The sentiment was echoed by herself and other protesters when a security guard arrived and threatened to call the police.

The protesters left right away when asked, but not before their message had been heard:

"Caution shoppers! We have the product of animal torture at Sak's Fifth Avenue! They're trying to sell you this fur at 75% off," yelled McQueen just before security arrived. "No one wants to buy or wear fur anymore!" 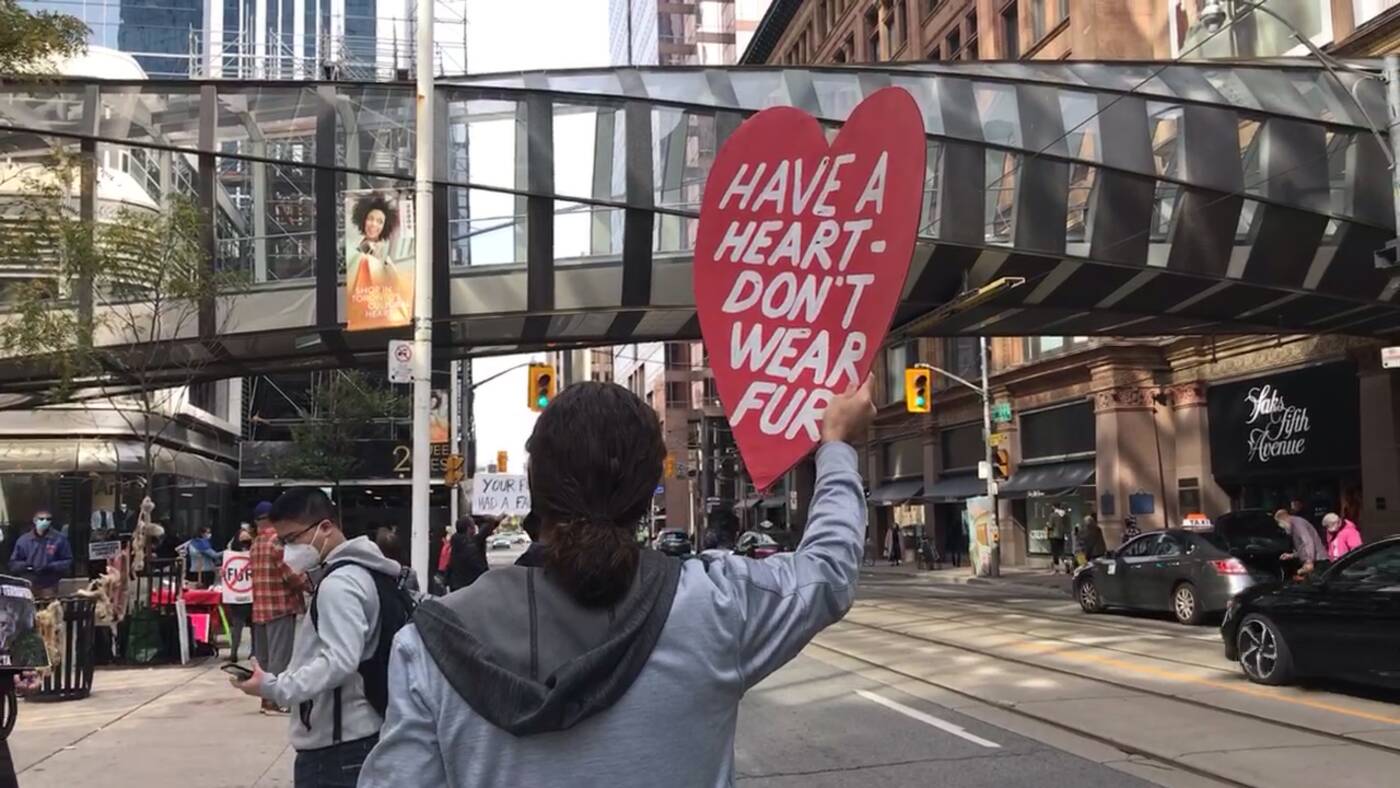 The Fur Free Toronto protest, staged in partnership with Direct Action Everywhere Toronto, was part of a global lockdown event for the Rose's Law Animal Bill of Rights movement.

Before hitting Sak's with their caution tape, protesters had gathered on Queen Street with signs reading "their fur, not ours" and "fur trim kills," among other things.

They also unfurled a massive red banner reading "ANIMAL BILL OF RIGHTS" inside the Eaton Centre, from which McQueen says she was subsequently banned. 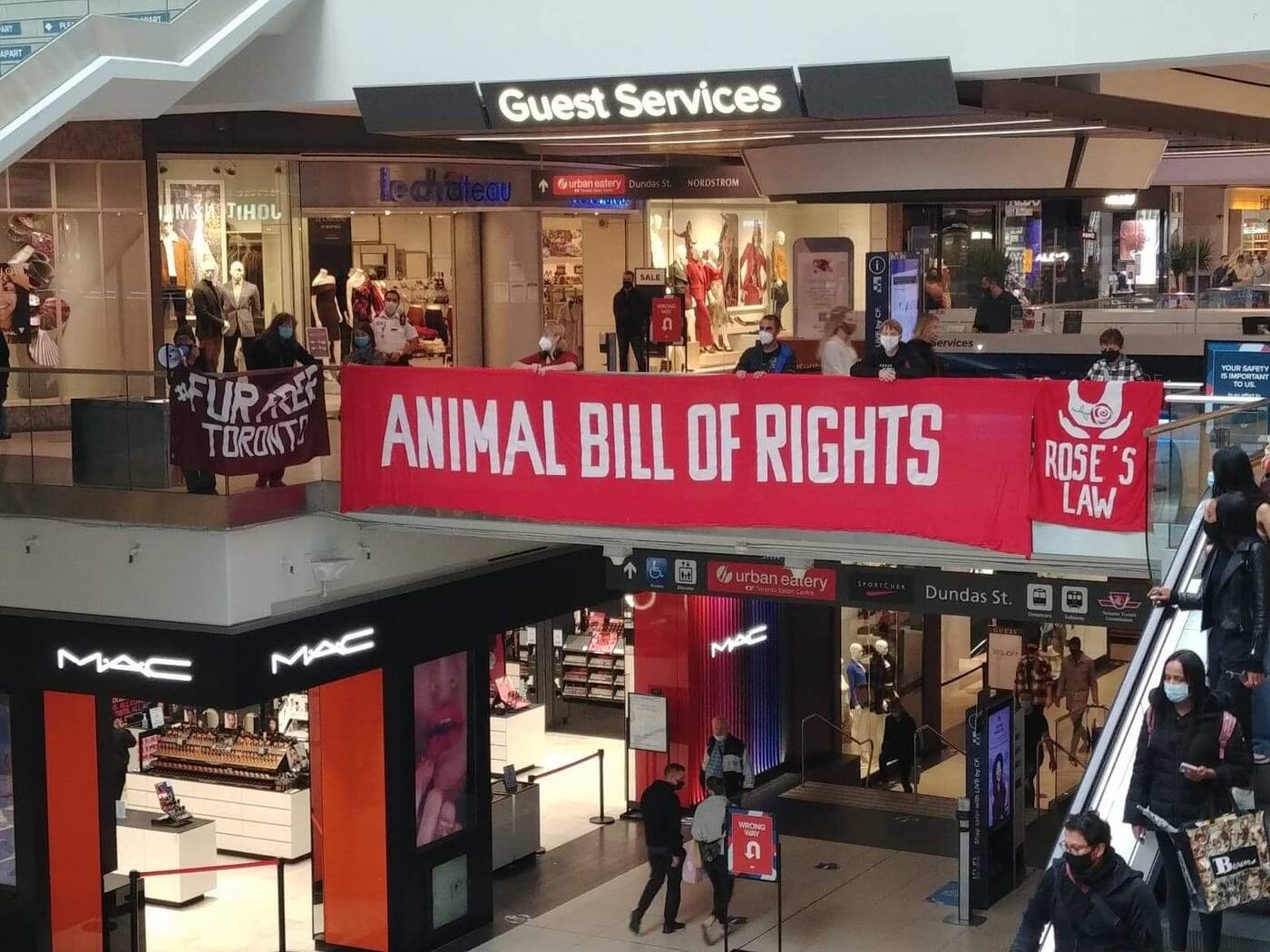 "Science tells us that nonhuman animals are sentient, and justice demands that all sentient beings be protected from tyranny and oppression," reads a description on Facebook for the protest event.

"For the past few centuries, we have been expanding our conception of who deserves our care, but we recognize that nonhuman animals still have no appropriate legal protections."

"We ask that you support legislation giving all sentient animals: The right to be free — not owned — or to have a guardian acting in their best interest," the description continues.

"The right to not be exploited, abused, or killed by humans. The right to have their interests represented by the law. The right to a protected home, habitat, or ecosystem. The right to be rescued from situations of distress and exploitation."