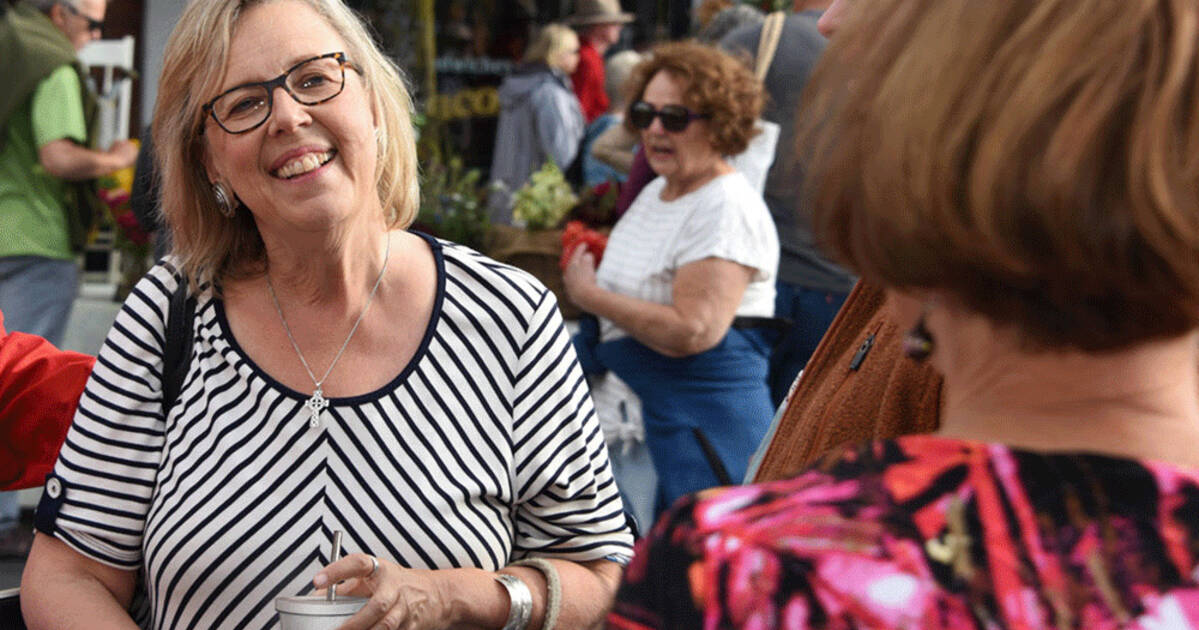 Another week, another scandalous photo of a Canadian politician making headlines around the world.

Next month's federal election is certainly shaping up to be a lot more interesting than anyone could have predicted.

The Green Party of Canada has admitted to using a doctored photo of longtime-leader Elizabeth May on its official website, and we're not talking about a vanity touch up job here.

The image in question was manipulated with Photoshop not to brighten anyone's teeth or remove any blemishes, but to insert a reusable cup with a metal straw into the party leader's hand.

Here’s the original, undoctored photo of Elizabeth May that the Green Party photoshopped to switch a paper cup with an imaginary reusable cup and metal straw, for some reason.

The photo is now on the front of the Green’s website.

In a piece published by the National Post on Tuesday, political reporters Maura Forest and Stuart Thomson point out the discrepancy between a photo prominently displayed on the Green Party's website and a near-identical image published in July by iPolitics.ca.

On the party's website, May can be seen holding a reusable cup with a metal straw in it. The photo on iPolitics, while cropped to cut out May's hand, is devoid of any straws.

On Tuesday afternoon, PressProgress editor Luke LeBrun published an archived link to an uncropped version of the photo as it originally appeared on the Green Party's website back in June.

That photo shows May holding non-reusable hot beverage cup from the brand GreenStripe, which states on its website that, while made with 100 per cent renewable resources, the cup is not recyclable.

In an era of “fake news” controversies, photoshopping a reuseable metal straw and a reuseable cup into the hand of Green Party Leader Elizabeth May would not be the greatest idea.
https://t.co/P8d3QtDyb1

When asked about the metal straw photo, Green Party Spokesperson Rosie Emery told the National Post that "Photoshop was used to add in a different cup that displayed the Green Party logo."

Emery said she didn't know why the straw was added and that she didn't believe it was meant to "make a statement" about May's environmental policies.

The Green Party's full election platform does include a section dedicated to plastic pollution, however, and proposes a national plastic waste strategy to "ban the production, distribution and sale of all unnecessary or non-essential petroleum-based single-use plastics" by 2022.

May's photoshopped straw scandal should be known as: #cdnpoli https://t.co/ppM4Ys0UYr

It's no "multiples images of Justin Trudeau in brown and blackface makeup," but Twitter users are having a field day nonetheless over what has become the second major photo scandal to rock Canadian politics ahead of October 21's general election.

"My question to [The Green Party] is: why do this when it may 'destraw' your credibility?" joked one Twitter user.

"I don't know if Canada can ever recover from the horror of this scandal," wrote another.

May herself has yet to publicly address the issue, but some of her supporters are speaking out in defence of the move.

"Given the opportunity, I think Elizabeth May would have preferred to have a reusable cup and metal straw but such opportunities are systemically lacking," wrote one on Twitter.

"We need political leadership to improve the likelihood of good environmental choices."

by Lauren O'Neil via blogTO
Posted by Arun Augustin at 1:23 PM