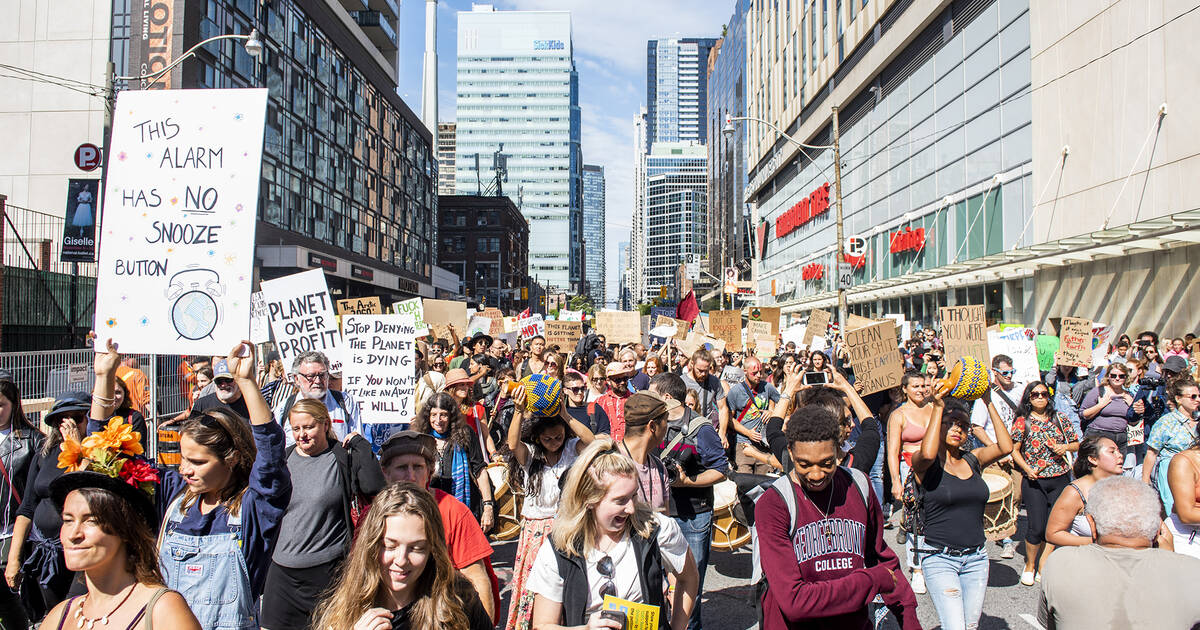 While the Global Climate Strike saw thousands of activists gather in Toronto today, the same was true across Canada and all over the world.

According to Fridays for Future, the group that organized the march,  almost 300 strikes took place throughout the country — and they were all filled with passionate, bold, hopeful protesters demanding change.

Here in Toronto, crowds gathered for speeches at Queen's Park before marching east on Wellesley St., down Bay St., across Queen St. and then up University Ave. They then returned to Queen's Park for musical performances.

Young protesters held clever signs saying "We stan a sustainable future," "Make earth cool again," "I like my boys hot but not my planet," and more.

And while the exact turnout isn't currently known, it seems like way more people showed up than was expected.

A very large climate strike demonstration in Toronto. I think this is much biggeer than anyone expected. https://t.co/07eK6HFsGX

In downtown Montreal, huge masses showed up to protest alongside the climate activist herself, Greta Thunberg. Liberal Leader Justin Trudeau and Green Party Leader Elizabeth May were also both in attendance.

NDP leader Jagmeet Singh attended a climate change march in Victoria, B.C., which also saw thousands show up and eventually made its way to the B.C. legislature.

Jagmeet Singh is now in Victoria where he will be taking part in the climate strike march. Police say close to ten thousand are outside the legislative building now but they’re prepared for upwards of 30,000. pic.twitter.com/iEVCk2CZah

But big cities weren't the only places in Canada that held climate strikes today.

Everywhere from Yellowknife, to Sault Ste. Marie, to Huntsville held marches of their own.

While people from all walks of life came out to demand action climate change today, an overwhelming amount of young people took to the streets despite schools refusing to close for the day.

In total, an estimated six million people took to the streets throughout this past week to march for climate justice all over the world.

by Mira Miller via blogTO
Posted by Arun Augustin at 2:11 PM