Toronto most infamous slaughterhouse just had its license suspended 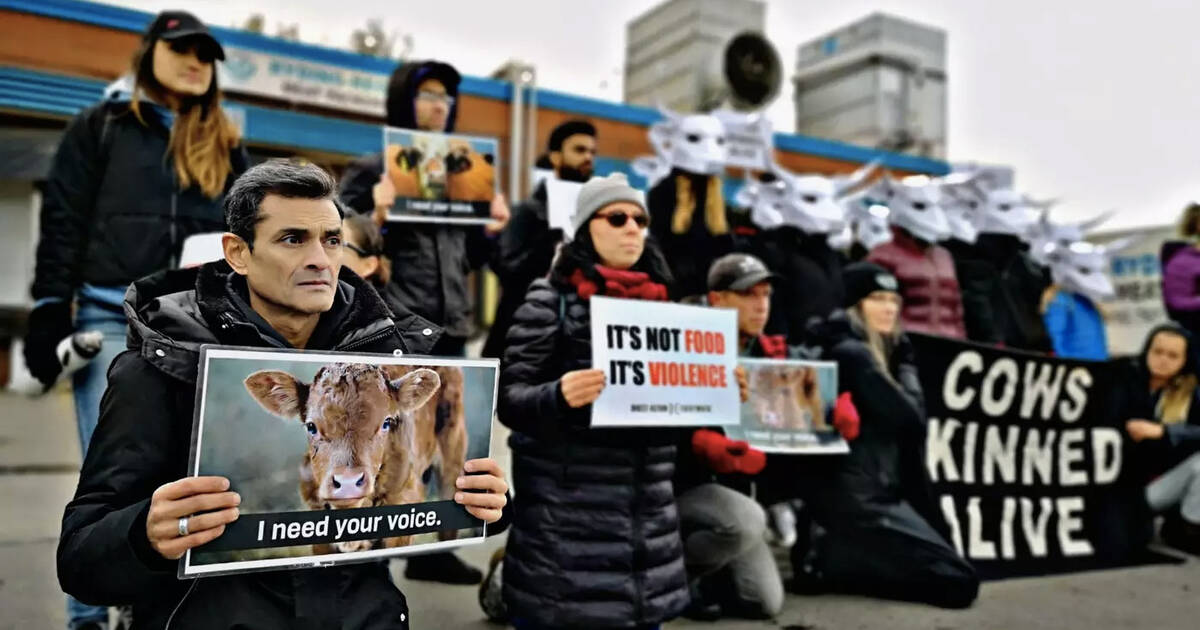 A Toronto beef processing plant best known for allegations of severe animal cruelty and for smelling up the Stockyards has had its licence suspended after years of pressure from activists and neighbours.

The Canadian Food Inspection Agency (CFIA) announced late last week that Ryding-Regency Meat Packers at 70 Glen Scarlett Rd. was no longer able to operate as of September 17 "for non-compliances related to control measures."

A food safety investigation is currently underway, but no recalls have yet been associated with the suspension.

Activists demand that secrecy be lifted over suspension of Ryding-Regency slaughterhouse’s license • What: Toronto Cow Save protest/vigil Where: Ryding Regency slaughterhouse When: September 24, 2019, 9:30-noon • *Interview opportunity: Both Jenny McQueen 647-230-1924 and Anita Krajnc 416-825-6080 will be at the vigil. Email: TorontoPigSave@gmail.com • Toronto. On September 23, the CBC reported: “The licence to operate was suspended because the operator failed to meet regulatory requirements as required (under) the Safe Food for Canadians Regulations. The company failed to implement effective control measures to ensure that activities conducted would result in a product that is safe for consumption." (See https://bit.ly/2ml3CRV) • “What are they hiding? The public have a right to know if there is the potential for an outbreak of disease in the city or if there is metal shard in the cow flesh or airborne bacteria and mould in the slaughterhouse facility,” says animal rights activist Jenny McQueen. In Nova Scotia, there was case in 2017 of a slaughterhouse with mould all over the ceilings and equipment. (See https://bit.ly/2kYRYMx) • “Ryding-Regency has also been shown to be a place of severe animal welfare violations. Two years ago, activists filmed cows being hoisted and skinned while conscious. Through the footage and speaking to slaughterhouse workers, we know there are plenty of infractions going on at Ryding-Regency on a daily basis. We created a petition calling for the CFIA to shut down Ryding Regency and have the support of more than 200,000 signatures,” says organizers Anita Krajnc. (See Toronto Pig Save petition: https://bit.ly/2mTqAMH) • Previously unreleased, the video clearly shows a large brown cow thrashing about on the floor, trying to get up, as blood gushes out of a gaping wound on her neck. A black-and-white cow similarly struggles on the floor, while a worker bends over and cuts her throat. Cows hoisted upside down, dangling from one leg, appear to be still moving while workers tear off their skin with knives. Blood is everywhere. • See the footage McQuaig refers to here: https://www.facebook.com/lightmoveme/videos/2232902013599676/ 💔🐮💔

"The licence suspension will be lifted if CFIA determines that the required corrective measures have been taken," reads a notice from the federal agency. "If measures are not taken within 90 days after suspension, CFIA may cancel the licence.

That would be great news for nearby residents who hate the smell of death wafting onto their properties from Ontario's largest processor of beef.

It would also be a cause for celebration among animal rights activists who've been calling upon the feds to shut down Ryding-Regency for years.

@thesavemovement @torontocowsave We all have choices in life and that is mainly because we were fortunate to be brought into this world as human. Nonhumans get zero choice. They are at the mercy of our species and our record of decency is abysmal! You have no argument. Your protests about taste and choice means nothing and is irrelevant! You either love animals which means you're vegan or you're an abuser! YOU DECIDE!! I'm done having this pathetic discussion with such close minded selfish individuals! FFS ... LOOK INTO THEIR EYES AND WAKE UP ALREADY!! #torontocowsave #COWSPIRACY #veganisthefuture #goveganfortheanimals #govegan🌱 #theirbodynotours #notyourbody #notyourmomnotyourmilk @ The Stockyards District

The slaughterhouse has come under intense scrutiny for its alleged inhumane treatment of animals since at least 2017, with some critics panning it as "the most violent place in Toronto."

Nearly 200,000 have signed a petition calling for the place to be shut down since video footage leaked of cows being hung upside down and skinned while still alive inside the facility.

"Ryding-Regency has also been shown to be a place of severe animal welfare violations. Two years ago, activists filmed cows being hoisted and skinned while conscious," said Toronto Cow Save organizer Anita Krajnc in a press release responding to the news on Monday.

"Through the footage and speaking to slaughterhouse workers, we know there are plenty of infractions going on at Ryding-Regency on a daily basis."

This beautiful angel was terrified - being on a strange truck, the smells surrounding the slaughterhouse, and of course humans, who had likely never been kind to him before. But cows are incredibly intelligent and sensitive beings, and he sensed something different about Jirina. Animals, humans included, are often drawn to her compassionate, calming, and comforting energy. ⁣ ⁣ We only have a few moments with the trucks. It’s never enough. But at least this special soul experienced a few moments of love before being brutally murdered for someone’s meal. At least he was seen and will now be remembered. It’s too late to save him, but we can share his story. We can try to bring the horrors of animal agriculture to light so more humans choose the compassionate way of living: veganism. This is why we bear witness. Please join us, and please go vegan for them.⁣ ⁣ @torontocowsave vigil, morning of July 9th 🐂💔

Local animal rights activists are now demanding that the CFIA reveal why, specifically, the slaughterhouse's license was supsended.

"What are they hiding?" asks Jenny McQueen of Toronto Pig Save in the release mentioned above.

"The public have a right to know if there is the potential for an outbreak of disease in the city or if there is metal shard in the cow flesh or airborne bacteria and mould in the slaughterhouse facility."