The history of the weird donkey statue with casts in Toronto 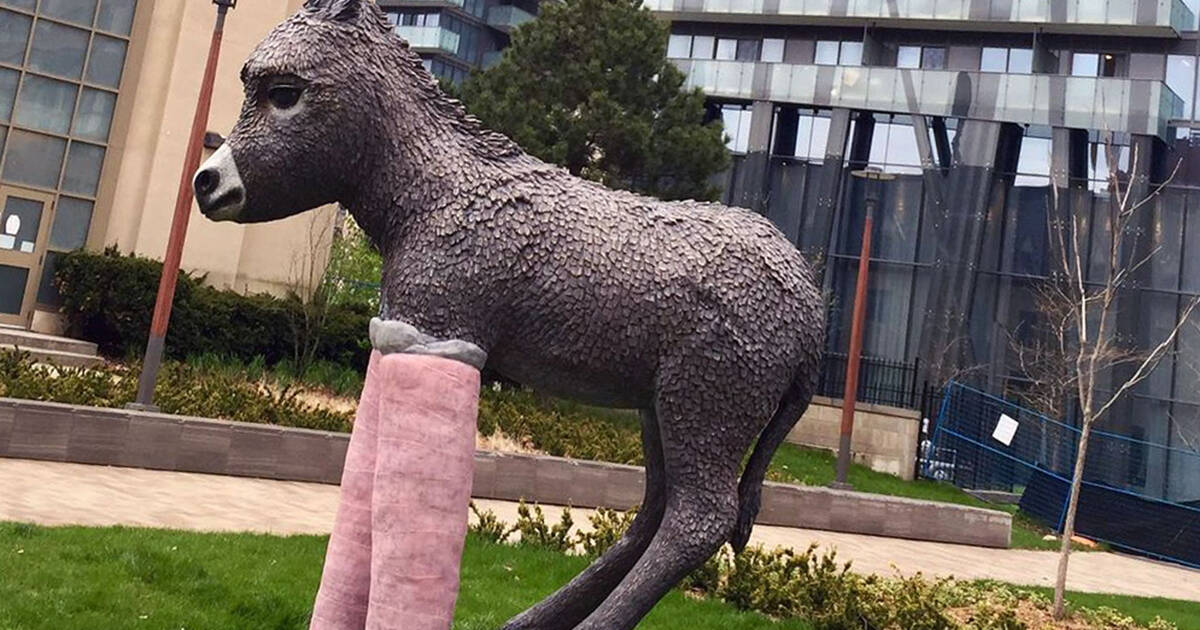 Of all the weird statues in Toronto, the 12-foot-tall donkey with pink casts at Clover Hill Park might be as cute as it is strange.

The bronze sculpture has sat at the northwest corner of Bay and St. Joseph Street since last year, acting as the entrance to U of T's St. Michael's College.

Despite the fact it hovers 3.6 metres tall, there's a chance you might have missed it, given Clover Hill Park remains closed off — to the ire of residents — due to issues between the city and developers.

But Primrose, which is the name of this piece by acclaimed Canadian artist Myfanwy MacLeod, remains accessible to passersby who might be wondering, why the heck is there a donkey on U of T property, and what happened to its front legs?

The work is based on an actual baby donkey named Primrose who was born prematurely in 2012 at the Bind Equine Veterinary Practice in Shropshire, England.

Primrose's underdeveloped bones would have led to permanently bowed legs, so local vets put some custom pink casts on her to straighten them out.

It took about three weeks for the foal to start walking on her own, but not before the adorable ass had captured hearts worldwide as the "wonky donkey" from England.

There's also a donkey sanctuary and rehab centre in Cobourg, about two hours' drive from Toronto, called the PrimRose Donkey Sanctuary. But the sanctuary's namesake recently turned 46 years old so she is not the same donkey.

MacLeod originally created a casting model of Primrose made from polyester resin and EPS foam, displayed in Vancouver as part of a 2019 installation at Vancouver's Libby Leshgold Gallery.

In her artist's statement, MacLeod called the sculpture a "parody of the equestrian monument", also citing references like Jesus riding a donkey and the "valorization" of the working donkey.

MacLeod is known for other large animal sculptures in Canada, most notably the pair of giant sparrows, titled The Birds, in the 2010 Olympic Village in Vancouver.

When it was first unveiled in Toronto, MacLeod also invited children to sign Primrose's plaster casts. The signatures have been cleaned off since then, though evidently, this donkey needs the love since there's no end to its suffering in sight.